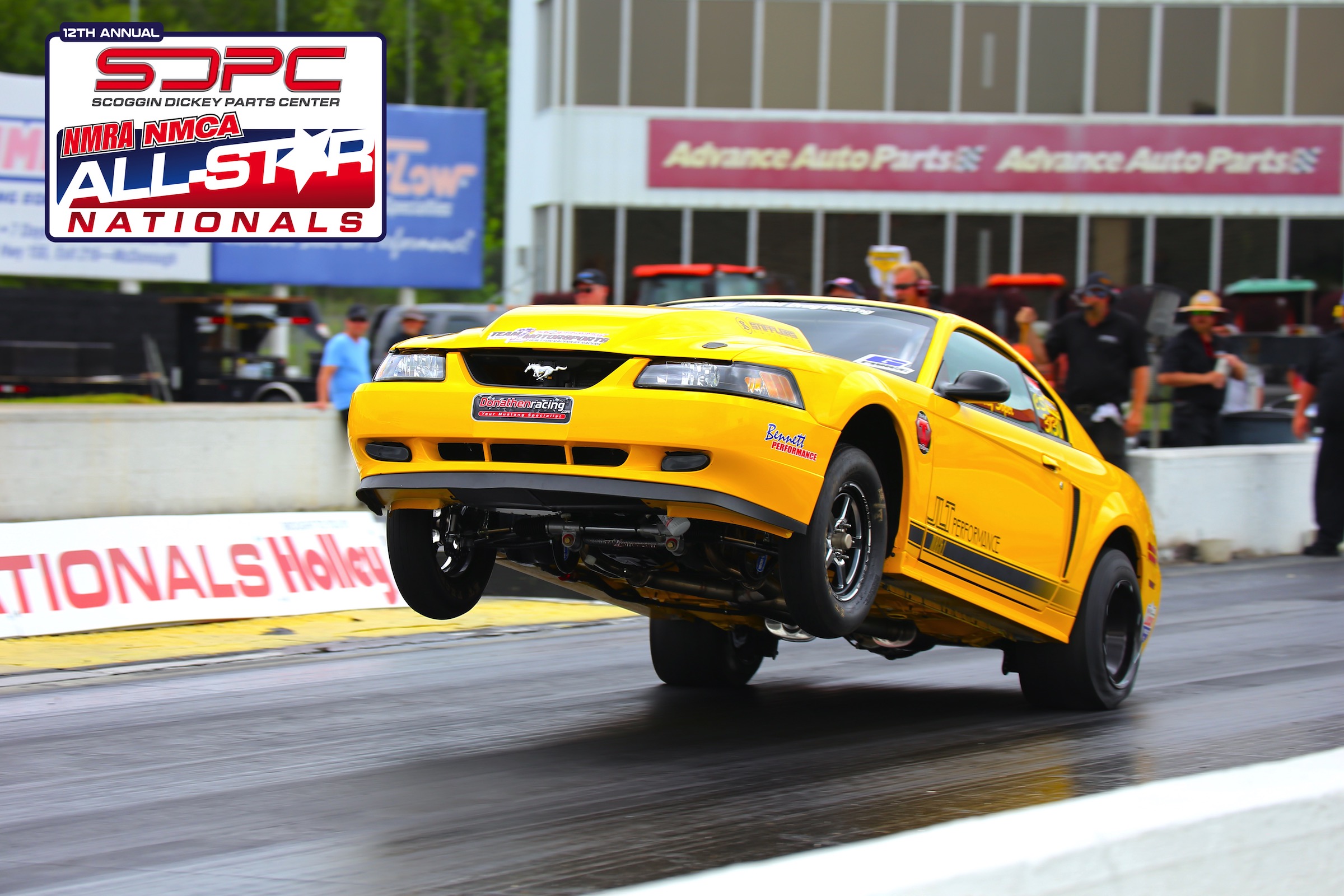 [gallery columns="2" size="large" ids="15385,15386"] Here is how the action will unfold on Saturday at the 12th Annual Scoggin-Dickey Parts Center NMRA/NMCA All-Star Nationals. 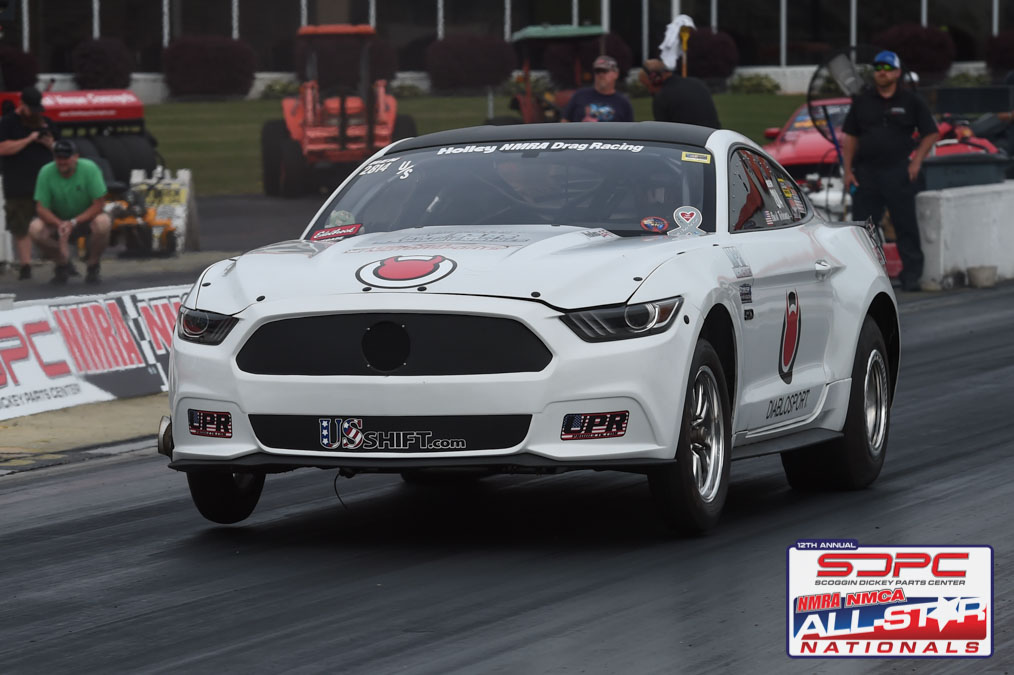 Tobener Motorsports' Bart Tobener changed his Coyote 5.0-powered S550 Mustang to run on VP Racing Fuels M1 Methanol over the winter, and he's still creeping up on the tuneup. In the hefty 24-car Edelbrock Performance Renegade/Xtreme Street field, he qualified 9th with a 4.828-second run.

After some challenging passes that resulted in suspension damage earlier in the season, Richmond Gear Factory Stock racer John Leslie Jr. is feeling confident this weekend. And he should after topping the charts in the second round of qualifying courtesy of a 10.40 at 127 rip. With a fresh suspension hardware and geometry issues rectified, the car is running straight and in control. It ran deeper in the 10s during testing, so he is hoping to improve and make moves at Atlanta Dragway.

With a history of attending this race, Bryan Lester didn't bring his quickest Mustang to the 12th Annual Scoggin-Dickey Parts Center NMRA/NMCA All-Star Nationals. Instead he entered the QA1 True Street class with his 1998 SVT Mustang Cobra. It was built by Gene Evans back in the day and it sports a Vortech supercharger, MagnaFlow mufflers, Maximum Motorsports suspension upgrades, and 4.10 gears. He says it is a blast to drive.

A former Richmond Gear Factory Stock machine is reappearing in the class with a new driver behind the wheel. Derek Grove picked up this 1993 Mustang LX and is competing in the class with a Two-Valve 4.6-liter engine under the hood. He freshened the engine and transmission, but he is still working out a few kinks with the hopes of running mid-10s this weekend.

Since parking his Mustang after the season opener, ROUSH Performance Super Stang stalwart Marvin Knack hasn't changed much other than the oil and the suspension settings. He cut a quick light right off the trailer, and it felt good, so Knack is sticking with what works as he seeks yet another trip to the Aerospace Components Winner's Circle.

Earning a 10.334 at 128.71 mph time slip, provisional number one qualifier in NMRA Richmond Gear Factory Stock John Leslie is clearly comfortable with his rock star status and is in no hurry to make any changes, as his pit was calm and clear well into the morning.

The only turbocharged entry in NMRA JDM Engineering Limited Street, Jason Davis would have set the record earlier this year in Bradenton, Florida when he went 8.44 at 161.61 mph but forgot to claim it. Davis learned his lesson and is back this weekend with a vengeance with his awesome Blue Beast team. Chris Jones of Blow By Racing has been hard at work as the heads have already been taken off and put back on three times in the past few days, and a new set of double adjustable Menscer Motorsports shocks are on board along with other suspension changes front and rear. Now, the group's goal is to get their BBR-tuned 15 Mustang GT back at the front of the pack once again.

NMRA G-Force Racing Transmissions Coyote Stock regular Jacob Lamb was busy changing his Coyote engine's plugs this morning for the first time in six years, or so he says. Lamb made a few shock and strut adjustments to try and make a bit of improvement, and has also been experimenting with different gear ratios in the transmission but reportedly didn't find a whole lot on the table there.

Wheeling Nathan Stymiest's Mustang, Chester Drake was all smiles this morning during a routine clutch and flywheel adjustment after reviewing his data. Drake is sitting in the number two spot at the moment in NMRA G-Force Racing Transmissions Coyote Stock qualifying, having already put down a 10.209 at 129.21 mph run in his 92 Mustang, and plans to use the third session for further testing.

Pennsylvania-based racer Vinny Dastra was up early working on his 92 Mustang LX, just making changes because he can't ever leave anything alone. Recently, several of the NMRA G-Force Racing Transmissions Coyote Stock racers hit up the same shop for some dyno testing, and while they kept some data a secret, there's enough camaraderie in the category that the guys helped each other out to try and improve the class overall.

NMRA JDM Engineering Limited Street racer Samantha Moore spun during qualifying in the heat of the day yesterday, but pulled off a number one performance to the tune of 8.669 at 157.50 mph that evening when the sun went down and the conditions improved. Moore's plan for today and tomorrow, though, is simply to be conservative enough to go A to B and stay in the game since a voltage issue with her Coyote-powered, VMP-supercharged and Turbo 400-equipped 14 Mustang's alternator has been causing sporadic troubles.

In NMRA JDM Engineering Limited Street, two-time NMRA Super Stang champion Kent Nine (middle) is putting the first laps on his new Vortech supercharged combination since bolting it on over the winter. Nine's 06 Mustang started out as a Paxton-equipped car, so it's getting back to its roots with this setup tuned by PTP Racing's Patrick Barnhill (left). Rolling on a set of Race Star Wheels, the Mustang's engine was machined by Holbrook Racing Engines and built by Nine himself. Unfortunately, its Turbo 400 transmission slipped into neutral when it shifted during last night's runs, so the guys are hoping for a bit better performance today.

The tuning file corrupted when it was loaded into Bill Putnam's UPR Products flagship 94 Mustang and the car wouldn't fire when they brought it up for the second round of NMRA JDM Engineering Limited Street. The guys took the car back to the pits, synched the tune, and had it running within a matter of seconds. It was definitely a disappointing situation as they needed the data and have had to take a wild guess at the tune up for the third qualifying session as a result, but they cashed in on the gamble as Putnam (right) wound up going 8.699 at 157.74 mph to finish in the number two spot. 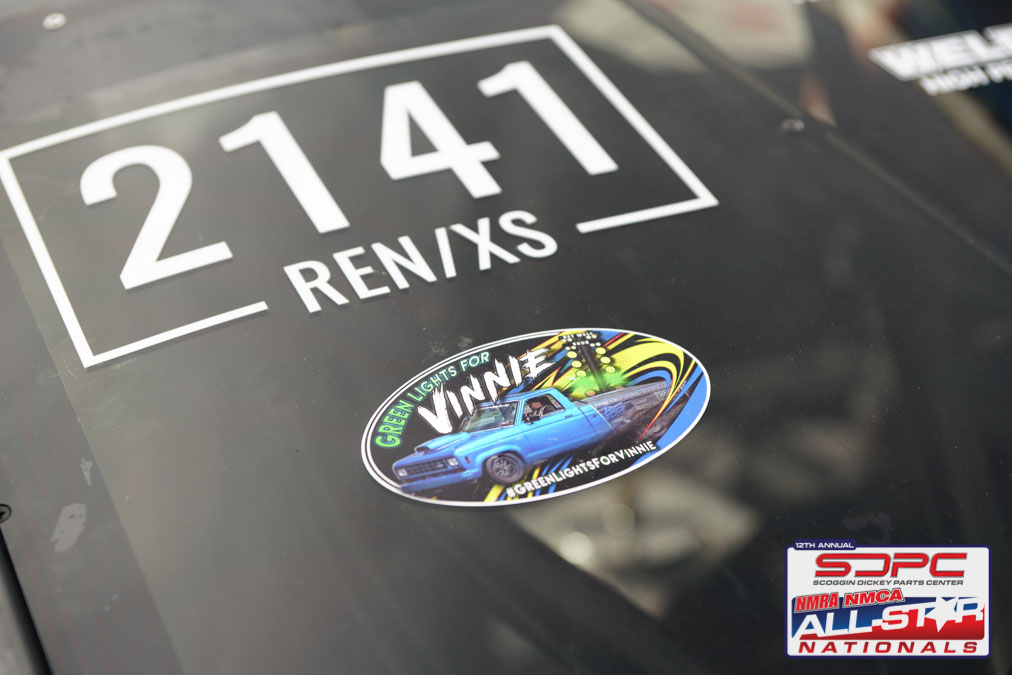 While a great many folks are glad to be racing, there is no shortage of those who have been affected by the Covid-19 situation, and the NMRA's Vinnie Telesco is one such person. The Detroit Locker Truck & Lightning racer was stuck by the virus a few months ago and is just now emerging from the battle. Fellow NMRA racers, including Brian Warcup, Joe and Becki Cram, Brad and Nina Gusler, and more banded together to create the #greenlightsforvinnie sticker you see here on Haley James' Hellion B-Team Mustang as well as many others here on the property at Atlanta Dragway. We hope to see you soon, Vinnie!

After a successful weekend at the season opener, Richmond Gear Factory Stock racer Mike Bowen didn't know what went away in his Coyote-powered Maverick Grabber. He hasn't made any significant changes since Bradenton, but he has determined that the car doesn't thrive in the thinner air, which he hopes to rectify.

Inspired by Roadkill's Mike Finnegan, Bill Uncle pulled his well-worn Fox and a pile of parts out of the garage and put this TorqStorm Supercharger True Street machine. He was so bored he put 3,000 miles driving it around to make sure the car was good to go. He was disappointed that it was only running low 12s when he expected 11s, but he was able to swap out a starter to get the car running before eliminations.

While the concept of finding the perfect sleeper is an elusive one, Alex Corella's 1993 Mustang LX might just be it. At first glance it looks like a clean coupe rolling on those classic chrome pony wheels. He recently swapped to the wheels and installed tailpipes (which are easily removable via V-band clamps) out back, so you wouldn't expect it blast its way to mid-8-second elapsed times. He also experimented with moving from the usual 3.55 rear gears to a set of 3.31s, which he says is killing the car. It still managed to impress in QA1 True Street.

It was a short weekend for Tyler Thornburg's 1988 Mustang GT in QA1 True Street. He hurt a lifter in qualifying, but the car was running 12.30s on the merits of a pushrod 5.0-liter engine beefed up with AFR heads, a Lunati camshaft and a Nitrous Outlet system. 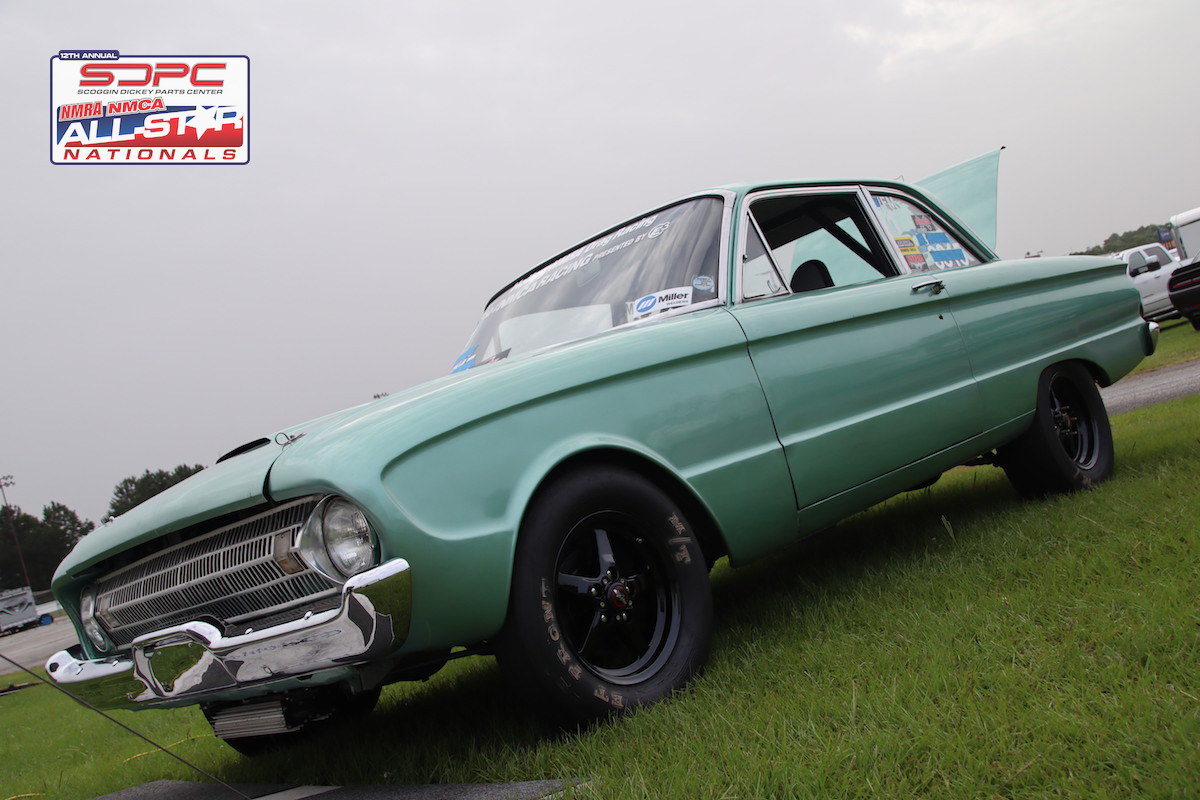 Because John Butsko had good memories of his first car, a 1961 Falcon, he decided to build another Falcon about ten years ago, and he did it one part at a time. "The parts and pieces were literally in boxes," said Butsko, with a laugh. Before long, he was racing it in NMRA Fastest Street Car Ford Muscle, and he earned a championship in the category in 2019 in the car which rocks a 302 cubic-inch engine and is running 12s at the 12th Annual Scoggin Dickey Parts Center NMRA/NMCA All-Star Nationals this weekend at Atlanta Dragway. Rather than focusing on earning another championship, however, Butsko focuses on having fun with friends at the track. Racing and being around all of these racers is a good escape for me, said Butsko. Get the full QUALIFYING RESULTs from the 12th Annual Scoggin-Dickey Parts Center NMRA/NMCA All-Star Nationals HERE. [gallery columns="2" size="large" ids="15431,15432"] Here is how the racing action will go down on Sunday at the 12th Annual Scoggin-Dickey Parts Center All-Star Nationals.
Atlanta Dragway
,
Coverage
,
Event
,
NMCA
,
nmra
,
Race
,
Scoggin-Dickey Parts Center