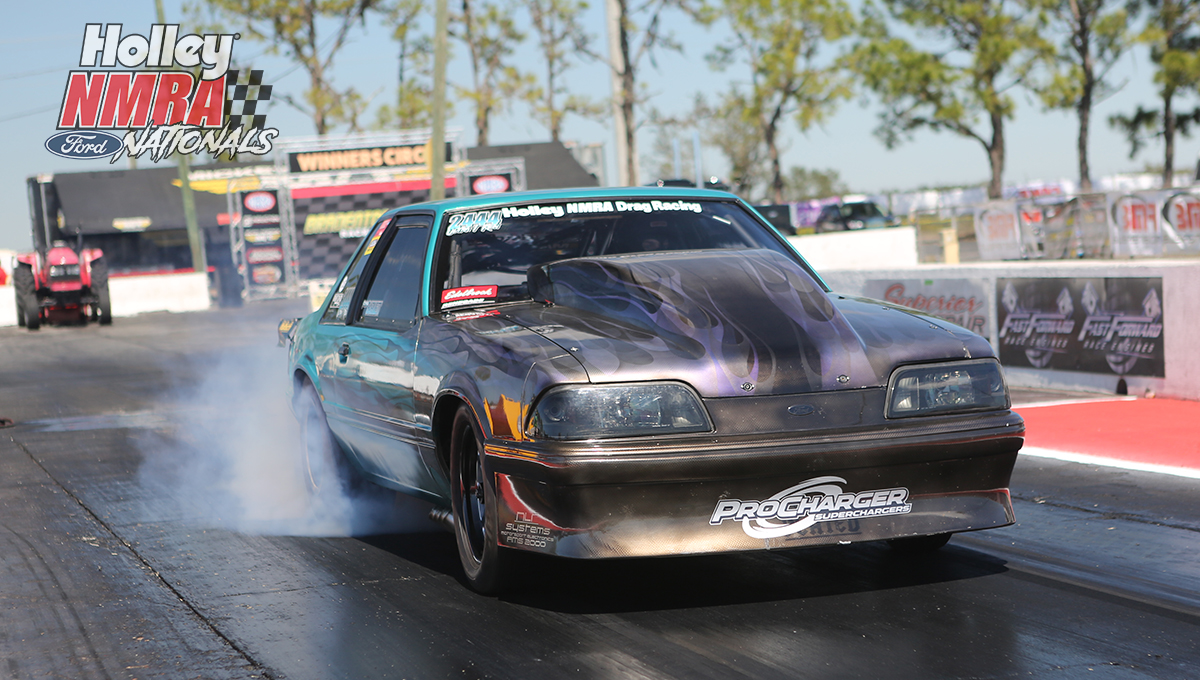 Stephen Barnett helped kickoff the BMR Suspension NMRA Spring Break Shootout at Bradenton Motorsports Park with his flawless 1990 Mustang LX coupe. His final ET was only a 4.90 but the incremental times show he will be a force to reckon with this weekend in Edelbrock Renegade. The car is powered by a 400ci small-block Ford that wears a set of Trick Flow High Port cylinder heads and gets from a ProCharger F-1A-91 centrifugal supercharger. 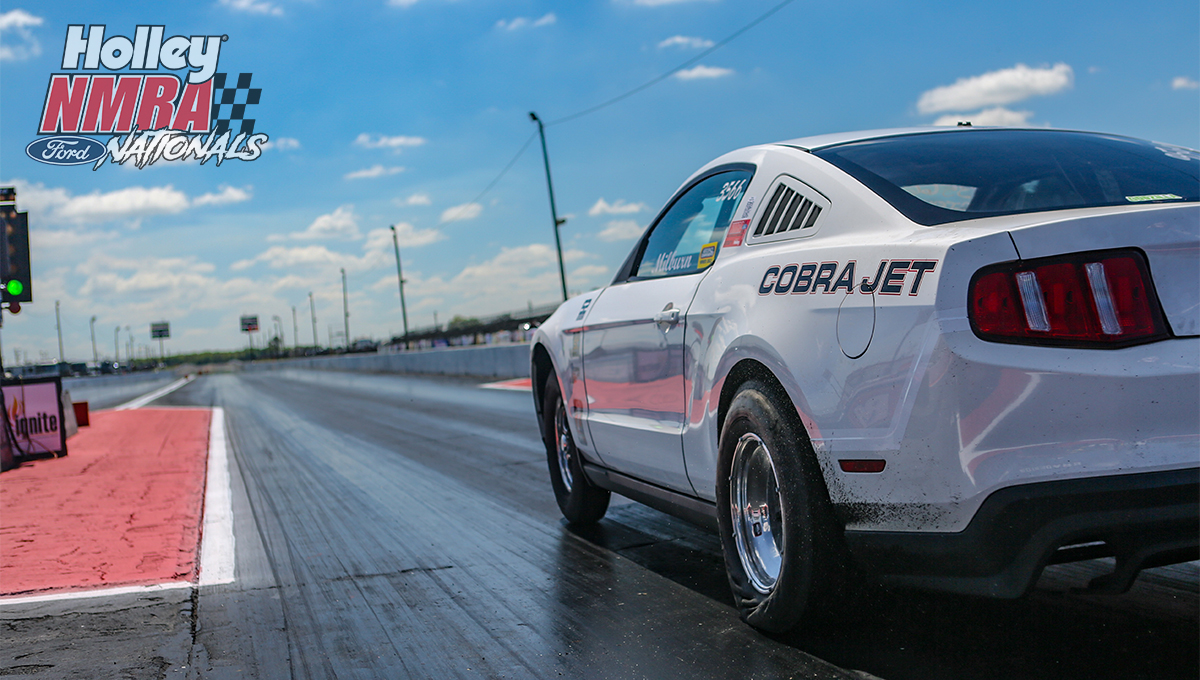 This weekend the NMRA is hosted the Watson Racing Cobra Jet Showdown Presented by Ford Performance. One of the more interesting vehicles entered in the category is the 2010 Cobra Jet that is powered by a Ford Performance 7.3L "Godzilla" engine. The car hustled down track with a 10.32 at 128 mph on its first hit of Thursday's test session. 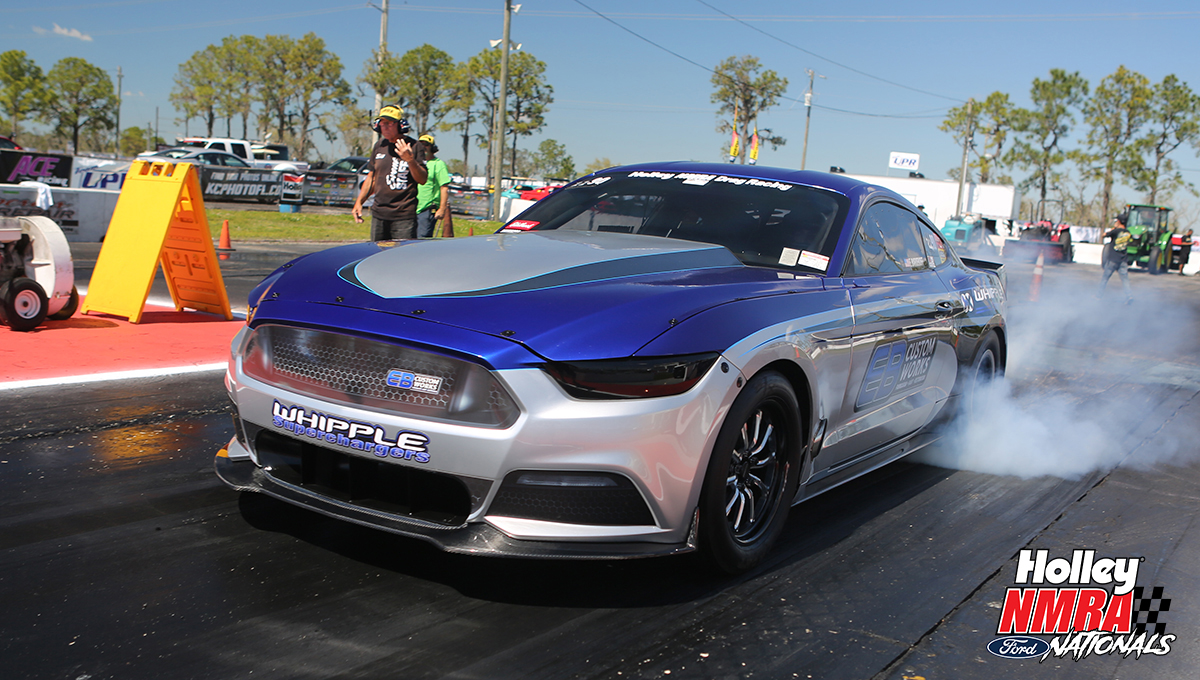 Eric Bardekoff is back in Edelbrock Renegade with his flawless 2015 Cobra Jet clone, which he built from an empty shell at his EB Custom Works shop. A Whipple supercharged, Coyote 5.0 sits under the carbon fiber hood. Bardekoff ran 1.11 sixty-foot and a 4.71 at just 145 mph, picking up where the team left off last year. The goal is launch the car right into the 4.60s by the time qualifying kicks off on Friday. 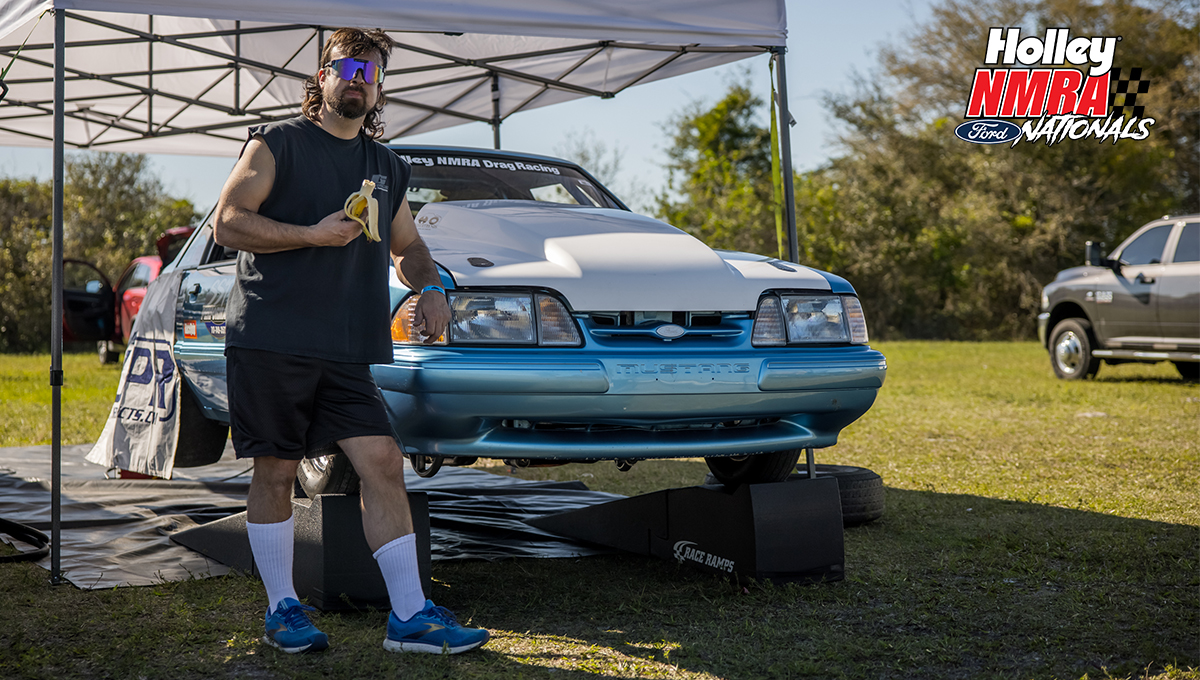 How quick will the new Gen 3 Coyote be in G-Force Racing Transmission Coyote Stock Nate Stymiest has set the pace at 9.74 at 135 mph during today's test and tune session. He was the second person to run in the 9s with the Gen 2 engine program last year and is unofficially the quickest class car with the new Ford Performance crate engine. As his 9.70s have set the pace in Coyote Stock, his influence is greatly noticed off-track, too, with the stylish mullet haircut and a pair of Pit Viper shades. Our best guess is that he is celebrating the vintage status of his Fox Mustang 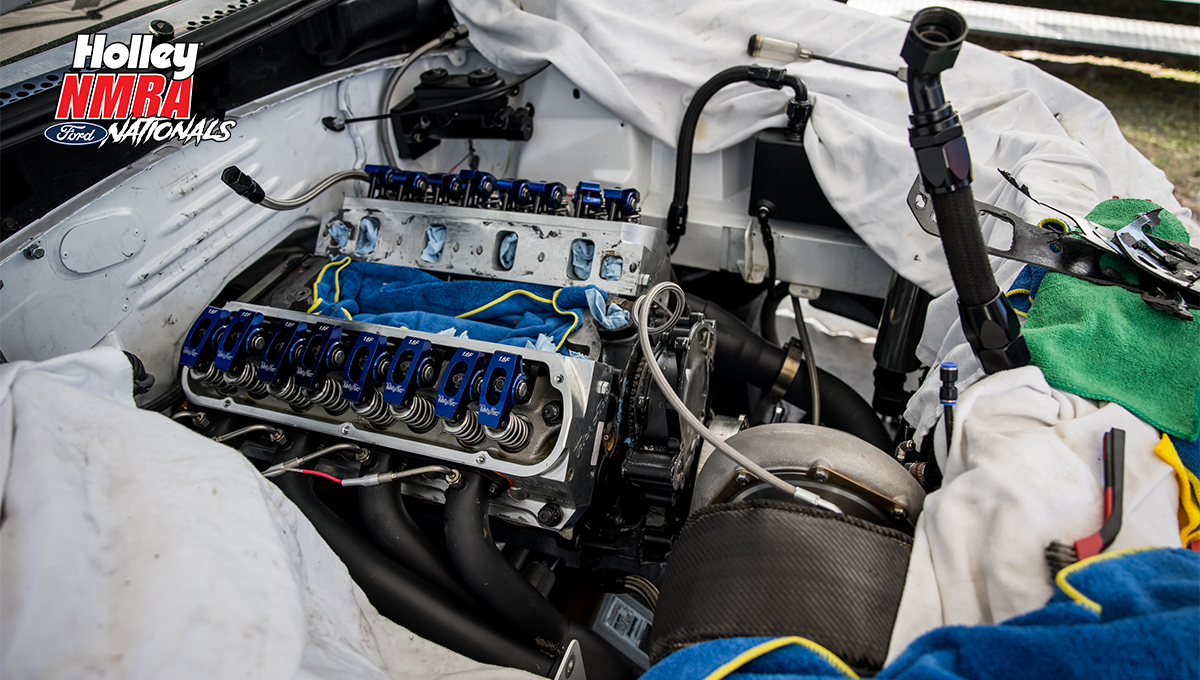 This is not how Kelly Shotwell imagined his weekend would start as he makes a triumphant return to JDM Engineering Limited Street, a class he helped define. The Cincinnati-based racer snapped the timing chain during warm-up this morning. He quickly shut off the 331ci powerplant, which most likely prevented the valves from kissing the pistons. They spent the day inspecting the engine, determining it is healthy and ready for repairs. Shotwell was confident they would have the car fixed and ready to rock for Friday's test session. 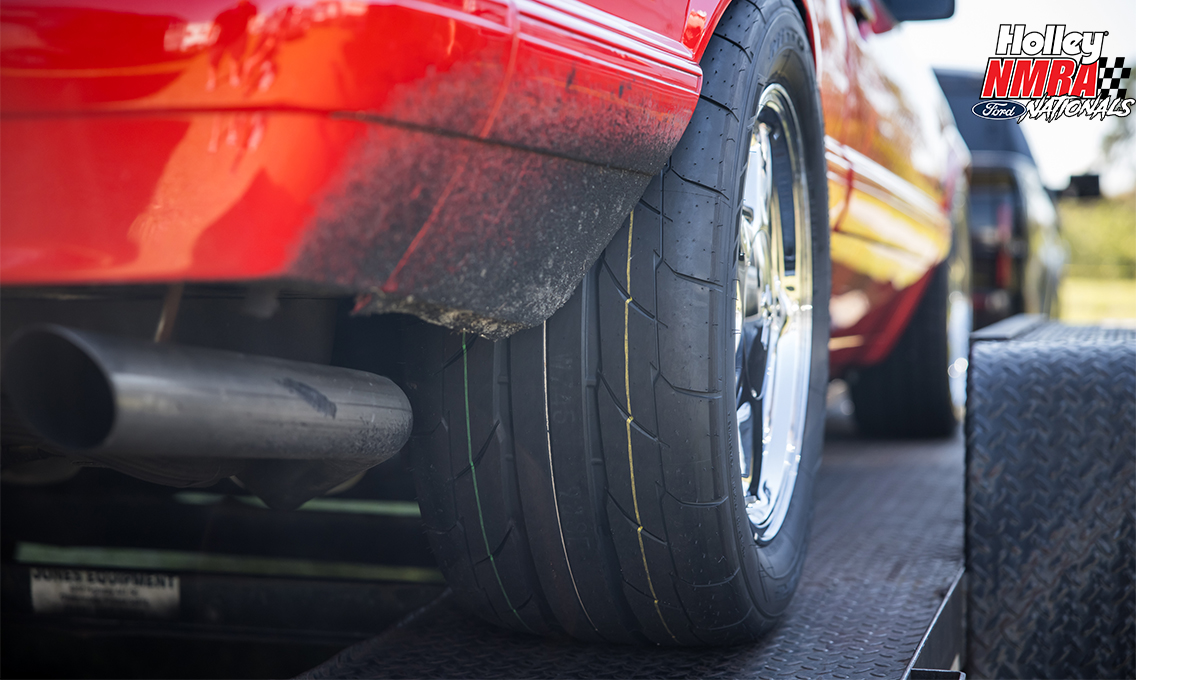 Alex Corella continues to have fun with his 1993 Mustang LX that we have all come to know and love. Last year the QA1 True Street racer showed up with a set of 17-inch Chrome Pony wheels and proceeded to knock down deep 8-second runs. This year he is mixing it up by adding a set of Nitto Tire NT555R2 305/45R17 drag radials and chase after the Nitto Tire Bonus that bumps True Street payouts to $1,000. You have to run on NT555R2 drag radials to be eligible and Nitto rewards the 9-second through 15-second categories with the bonus. He and car builder Willie Lujan are aiming for the 9.00 win, a number they are confident they can hit. 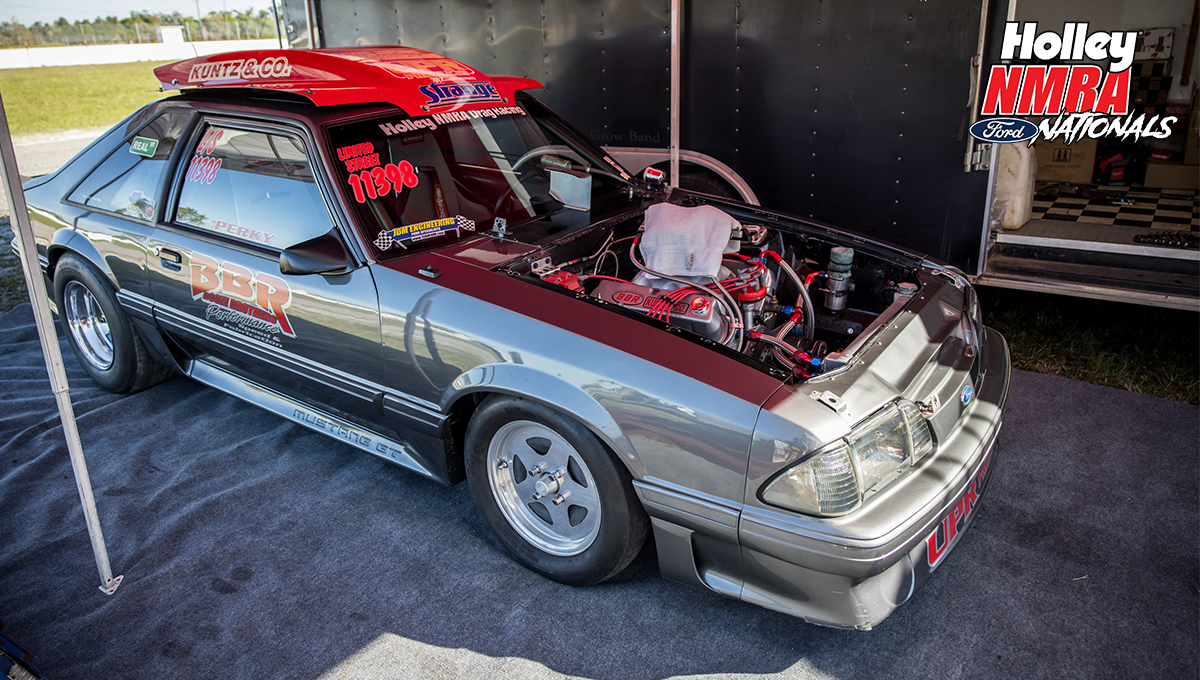 Multi-time NMRA and NMCA champion Charlie Booze Jr. has jumped into the deep-end of JDM Engineering Limited Street. He grabbed a class-legal rolling chassis last year and updated it with one of his old Kuntz and Company 400ci powerplants. The former Hot Street engine combination features a pair of Brodix Track 1 cylinder heads and Booze ran an 8.62 off-the-trailer as he gets acclimated to the new-to-him chassis. 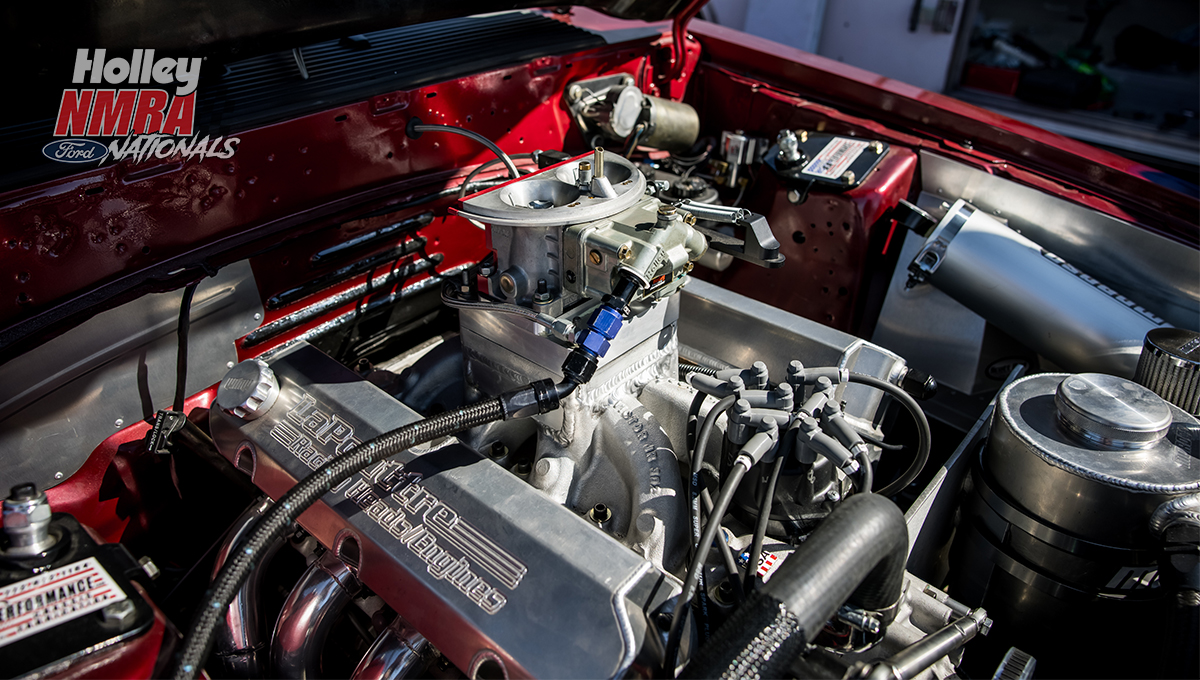 We are normally used to seeing Kevin McCotter in JDM Engineering Limited Street but his new bullet wasn't ready in time for the trip to Bradenton Motorsports Park. He borrowed this engine and stuck it into one of his street cars to have fun in QA1 True Street this weekend. His goal is to run 11.00s with the unique setup, which features a stock-block 302 that is punched out to 331ci. Sitting on top of the rev-happy engine is a two-barrel Holley Dominator.
BMR Suspension
,
Bradenton Motorsports Park
,
Holley
,
nmra
,
ProCharger
,
Spring Break Shootout
,
UPR Products
,
VP Racing Fuels