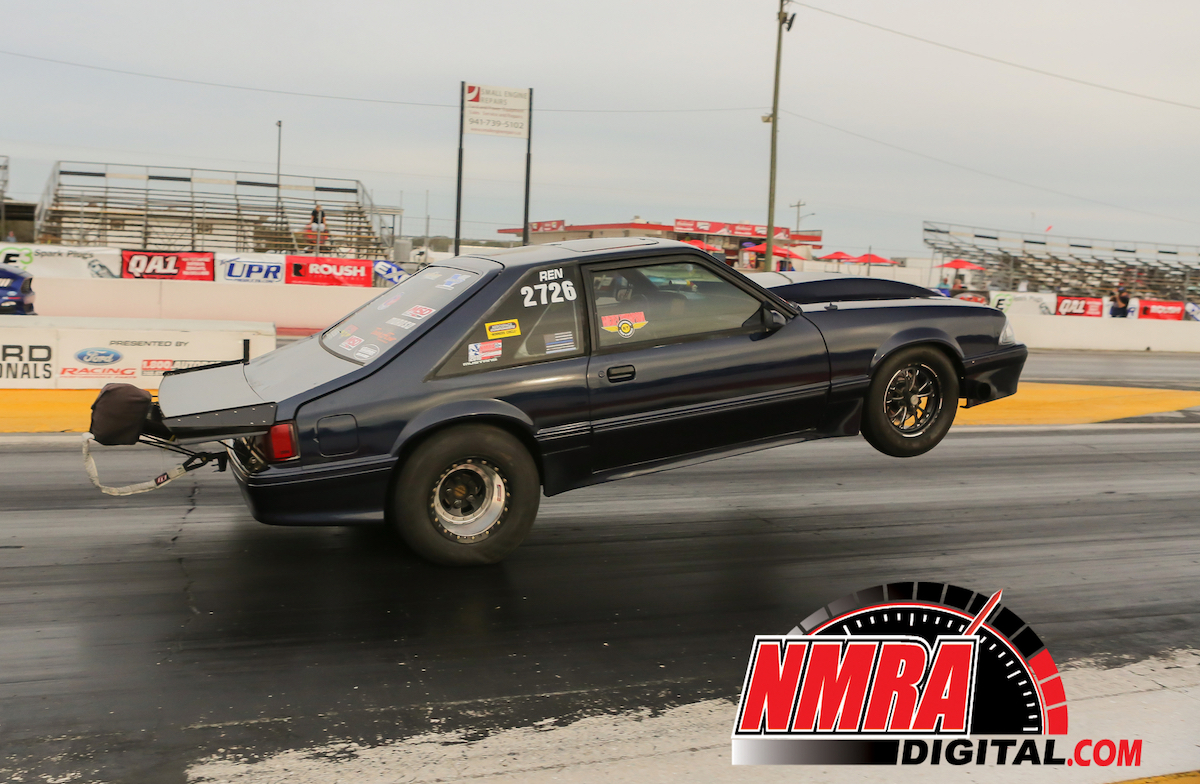 Team Hellion is on the property, minus the team leader's VP Racing Fuels Street Outlaw ride, as his new 2015 Mustang racecar is being finished up. Nine-time NMRA champion John Urist loaded up his wife's gnarly 8-second street car and both championship winning cars from Hellion Racing's B-Team, driven by Haley James and Frank Varela. The party is just getting started with Melissa Urist's S550 Mustang. A larger set of turbos were bolted on to the Hellion twin-turbo kit and they added a JMS Performance transbrake to the 6R80 transmission. She ran 8.90s at the end of last year, a number they are looking to improve on.

Back in the saddle! Manny Buginga made his official return to NMRA competition by partaking in this afternoon's test and tune session. The blue coupe features a Nelson Competition 380ci engine that wears a set of Brodix heads. The team brought a special Precision 98mm turbocharger to the track and Buginga has the Bruder Brothers here handling the tuning chores.

JPC Racing's Ronnie Reynolds dropped into the 7s on his third pass with his new turbo combination. We got a closer look at the setup, which features a Precision turbo hiding behind the grill with an air-to-water intercooler shoved in front of the radiator. He ran 7.97 at 172 mph as the Fluid Turbo Concepts Turbo Coyote Shootout competitors are pushing each other during test and tune.

While a bulk of the attention in the Livernois Motorsports EcoBoost Battle has been focused on some of the quicker car in the class, the reality is that the category is open to any EcoBoost-equipped Ford vehicle. Here is one of several non-Mustang entries in the shootout.

The rear bumper of Haley James' ProCharger Coyote Modified championship car has saw plenty of abuse when the team went to the Street Car Super Nationals this past November and pulled some massive wheelies. They put the car back in class trim by bolting on the Mickey Thompson ET Radial Pro 275 tires and adding the Precision 68mm turbocharger, as she begins her title defense this weekend.

Looking to stake their claim in QA1 True Street is the Greiner clan from Plantation, Florida. Burtt Greiner's 91 Mustang GT is packing a TyTech Performance 427ci Windsor with a 150 shot of nitrous oxide on it; a combination that made 742 hp at the wheels. The car has been 9.7s at 143 mph in the quarter, but after a test hit, Burtt's son and crew chief, Andy, noticed that the oil on the dipstick revealed the telltale signs of a milkshake in the oil pan. We caught them in the middle of the head gasket replacement, and hopefully they'll get the AOD-equipped Fox Body back in action before too long. Burtt's wife, Connie, is also competing in True Street with her very clean 98 Mustang, which has a 347ci small-block making 10-second power.

All the way from Lancaster, California, is the Calvert Racing Suspensions team with its pair of Cobra Jet Mustangs. The orange 2015 started off as a body-in-white chassis and was the first S550 Mustang in the 8s. It features a Calvert Racing 3-link rear suspension, and a supercharged 5.0-liter Coyote engine. Last year, John Calvert won the Cobra Jet shootout at this event with the silver car, and his son, Brent, previously drove it to two NMCA West championships.

Joe Guertin was the talk of the ProCharger Coyote Modified category last month when he ran 7.87 at 172 mph in legal trim during testing. He showed the run was no fluke as he pushed the ProCharger-pumped coupe to an 8.08 at 165 mph. Guertin had to make a last minute repair before hitting the road yesterday when he discovered a torn upper torque box. CRE Performance came to the rescue and welded it prior to his departure for Bradenton Motorsports Park.

One of the heavily favored entries in Fluid Turbo Concepts Turbo Coyote Shootout is Jeremiah Hussey with his 2011 Mustang GT. The Armageddon twin-turbo system features a pair of Garrett 67mm turbochargers and the car has been bottom 8s. Hussey said he is looking to turn the boost up and take aim at the mid-7s with trap speeds approaching 190 mph. Yesterday he picked up 42 mph in the back half after leaving the starting line softly.

Palm Beach Dyno is making its NMRA debut as Ken Bjonnes and Joe Coffeeman DeCaria rolled out a new ProCharger Coyote Modified street car. The shop is the latest high-performance facility to hit the Southern Florida market and is based in West Palm Beach. Bjonnes told us that the car has a MPR Racing Engines Coyote bullet with a ProCharger F-1A-91 supercharger. The power is there, though Bjonnes was quiet on the dyno numbers, but the street car is definitely overweight despite dumping the back seat and some other easy to toss interior parts. QUALIFYING ROUND 1 <<HERE>>
2016
,
bradenton
,
florida
,
nmra
,
Spring Break Shootout