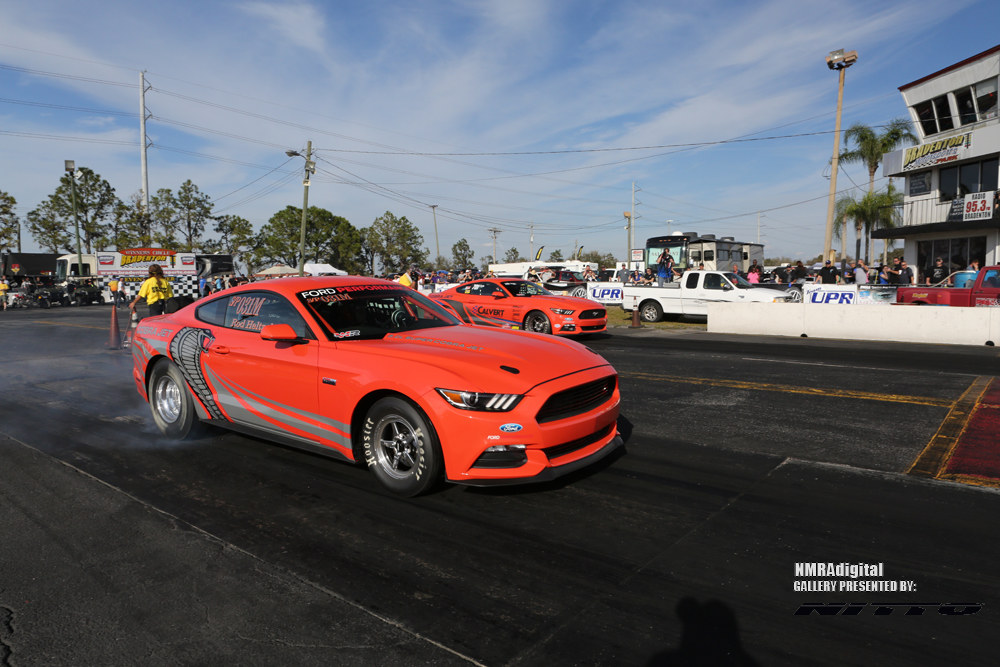 Before yesterday's grudge racing action began, class competition concluded with the crowning of the Cobra Jet Showdown winner. Jacksboro, Texas, resident Rod Heltzel convinced Ford Performance to build him a 2016 CJ in his favorite color, orange. The car is a 1 of 1 of the 50 CJs made for the 2016 run, but what may be more impressive is the fact that Heltzel picked the car up from Ford and brought it to this event not having made a lap on the Mustang. The team utilized the test sessions prior the the Showdown to dial in the car, which runs 8.60s at 158 mph. Once in eliminations, Heltzel took out Chuck Watson, Mike Harris, Anthony Bongiovanni, and finally John Calvert to earn his trip to the Aerospace Components Winner's Circle.

After a late night with the Grudge racing and the enormous field of QA1 True Street cars, we weren't able to grab the final results of True Street. Follow this <<link>> to see how it all shook out. Additionally, the Tremec Transmission Stick Shift Shootout and final Spring Break Shootout Top 16 are listed in Final Qualifying <<HERE>> Above Randy Seward finished as the Overall Winner with a new career best average of 8.32 while Mike Jovanis completed his True Street adventure as Overall Runner-Up thanks to an 8.68.

It was a good thing that Kurtis Forsgers had a bye in the first round of the Spring Break Shootout, as his turbocharged '98 Mustang went up, up, and away right after the launch. From our vantage point, Forsgers brought it down very nicely and the Oviedo, Florida, resident should be able to continue. The air is cool, the track is tight, so the conditions are optimal for such high-flying antics.

Joe Guertin continues to push harder and harder into the 7s, this time his first round bye run resulted in a 7.89 at 175 mph performance.

The slightly wrinkled sheetmetal of Ronnie Reynolds' 2014 Mustang GT didn't seem to slow him down in round one of eliminations of Fluid Turbo Concepts Turbo Coyote Shootout. The JPC Racing team member ran 7.77 at 181 mph after a slight encounter with the wall last night during the Grudge race session of NMRA After Hours. "I came down from the wheelie and the car had been pulling left, I scuffed the wall, and then I grabbed the boost scramble button to chase down Brian (ed note: Devilbiss)," he said. The boost scramble button is an option on the Boost Leash controller by activating it, the wastegates closed and jumped the boost up to 33 psi as he tried to get back in the race.

The Wheels Up Racing team polished up their VP Racing Fuels Street Outlaw racecar over the winter, literally. The fresh glossy black paint and rear wing delete option have garnered a lot of attention but its the 4.39 at 165 mph top qualifying effort that got the fast crowd talking. A new Kuntz and Company 400ci engine sits between the framerails with a new Precision Pro Mod 98mm bolted on. Last year, Russell Stone and Dwayne Barbaree swapped to a ProCharger F-1X-12R supercharger but the revised turbo rules had them putting their exhaust-driven boost maker back on.

Sleeper of the weekend Remove the VMP Performance signage and this could very well be a money maker at NMRA Grudge Night. The truck is brand-new and the VMP crew threw a Roush Stage 1 TVS supercharger with a custom VMP Performance calibration. The truck cruised to a best of 12.00 at 112 mph! Bradley Marsh completed the QA1 True Street challenge with a 12.17 average.

It is Seventh Heaven at the Spring Break Shootout in the ProCharger Coyote Modified class as "Johnny Lightning" Wiker secured his name in the record books as the second racer to enter the prestigious 7-second club. He just dropped a 7.96 at 175 mph as he dispatched Jeff Polivka in the semifinals of the heads-up category.

James Meredith has been killing it this weekend in American Racing Headers Factory Stock and dropped into the 10.50s with a 10.59 at 123 mph as he heads to his third straight final round, dating back to last summer. The final round will be a replay of the 2015 NMRA/NMCA Super Bowl of Street Legal Drag Racing finale where Meredith faced three-time champion Matt Amrine. The defending champ dropped a 10.63 at 125 mph in his semifinal bye-run as he picked up nearly a tenth of a second over his qualifying time of 10.71.