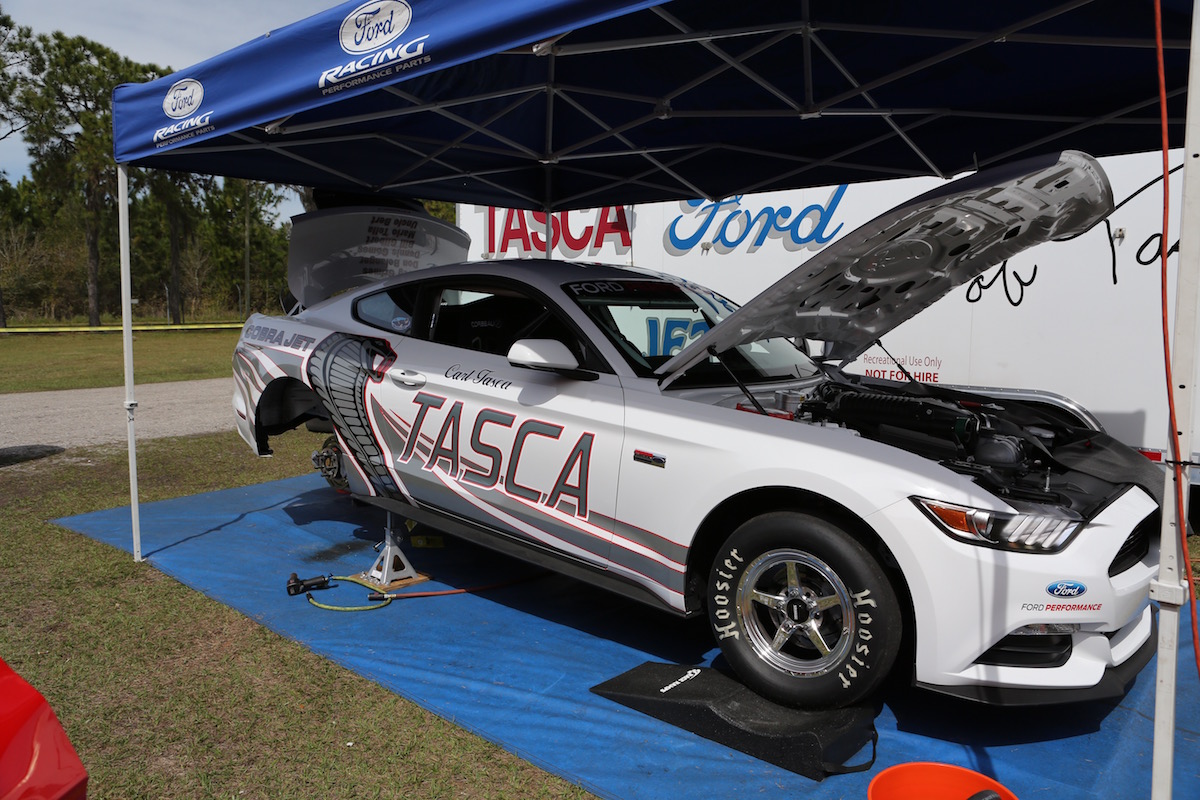 The gates are open for the 22nd annual Nitto Tire NMRA Spring Break Shootout, presented by Muscle Mustangs & Fast Fords as trucks and trailers with license plates from all over the country are rolling into Bradenton Motorsports Park in preparation for this weekend's wild action. There are a bevvy of specialty categories that will combine with regular line-up of NMRA competition to provide action packed competition on track and a massive car show both Saturday and Sunday. Stay tuned to NMRAdigital.com for daily updates. Today is move-in day with racers and vendors parking and going through tech inspection. There is an open Test-N-Tune this afternoon, beginning at 2:00PM with the lanes closing at 5:00PM and gates secured by 6:00PM.

You're not seeing double BG Racing has two identical appearing EcoBoost Mustangs slated for competition in the Livernois Motorsports EcoBoost Battle, which is one of five different special shootouts hosted this weekend. The S550 in the front is Brad Gusler's record-holding machine carrying major sponsorship with RaceStar Wheels for 2016. It has been 10.50s with a CPE-built EcoBoost and a very big Precision turbocharger. The car on the other side belongs to his wife Nina Gusler, who is the 2014 Detroit Locker Truck & Lightning champion and will be jumping into the heads-up fray for the first-time in her NMRA career. Nina told us that she has a pretty badass EcoBoost Mustang, not as quick as her husband's car right now, but she expects to dip into the 10s if the conditions are right.

JPC Racing rolled out its record-holding 2011 Mustang GT sporting a new turbo combination. Due to balance of the racecar, the Maryland-based performance shop moved the intercooler forward of the front wheels to help keep the front-end down. The JPC gang also revised the turbo system with a new crossover pipe and placed a brand-new Forced Inductions 88mm turbo in the front bumper. A carbon fiber front nose cone was also added over the winter that they picked up from Jeffers Pro Cars and a JLP Racing rear wing and carbon fiber deck lid were also bolted on. Burcham continues to carry primary sponsorship from AEM Performance Electronics as the team relies on the Infinity EFI system to control the RGR/JPC Coyote engine. Burcham is entered in VP Racing Fuels Street Outlaw this weekend rather than Turbo Coyote Shootout, which is sponsored by Fluid Turbo Concepts this weekend.

If you are a Cobra Jet owner, particularly a Stock Eliminator legal package, then the next three weeks can be filled with nothing but drag racing! Back again this year to the NMRA race is the Ford Performance Cobra Jet Showdown, presented by Watson Racing. Almost thirty Cobra Jet racecars are on the property to partake in festivities, which is an Index, no Breakout style class. Next weekend is the brand-new NMCA Factory Super Cars, which is backed by Holley EFI and the supercharged Stockers are going to run heads up against COPO Camaros and Drag Pak Challengers. And if that isn't enough racing, a group of Cobra Jets will continue on to the NHRA national event dubbed the Gatornationals that is held up the road at Gainesville Raceway.

The hottest racer in Edelbrock Renegade going into the winter was Alton Clements Jr. with his supercharged Fox-body Mustang. After grabbing three straight wins to close out 2015, Clements showed up with something new bolted to his 363ci powerplant. A Vortech YSi-B-X supercharger is on there and Clements said they are going to test it today and if the results are favorable, they will leave it on there for the rest of the weekend. Last year Vortech began developing a step up from the successful YSi-B as it looks to climb back on top of the Renegade world.

Ronnie Reynolds came right off the trailer with a brand-new turbo combination out of JPC Racing and ran 8.22 at 166 mph! We haven't caught up with him yet to get the scoop on the particulars, but we did notice the Import-inspired hood exit exhaust pipe, which is present on the team car driven by Justin Burcham. Oh yeah, and the track is live if that didn't give it away.

Gary "Hollywood" Parker rolled his iconic Sonic Blue 2001 SVT Cobra out of the trailer and it is sporting an Exedy Racing Clutch Modular Muscle car number. Last year, he ran Coyote Stock but decided to head back to the familiar Modular Muscle category and he said with an obvious hint of enthusiasm, "we are going to have some fun this year with these boys and girls." His first race back to Index racing will be interesting as the Modular Muscle category is said to be its biggest in years.

The winter months didn't quiet down Aaron Bates' Edelbrock Renegade machine. He added some paint to the car and had Dez Racing go through the car bumper-to-bumper as he prepares for a full season of NMRA competition. He will be joined by a second Dez Racing entry in the Renegade class somewhere down the road the team is looking at the Ford Motorsports Nationals, as an old school NMCA Xtreme Street racer is finishing up a twin setup for his Fox-body Mustang.

This was the face Mike Washington made after dropping a 10.31 at 127.5 mph performance in his Coyote Stock racecar. The 1993 SVT Cobra clone was simply dusted off after a long winter in New York. Washington said he simply tossed in some new spark plugs and changed the oil then hit the road the other day, Washington was happy to say that he did secure HP Tuners as a title sponsor of his car for second straight year. The 10.31 performance was the quickest run we have seen so far from the Coyote Stock crowd with Jacob Lamb turning in a 10.40 at 126 mph performance a few pairs before Washington.

The 2016 Cobra Jets have already thrust themselves into the 8s out of the gate with a few of them running 8.80s. The cars are delivered turn-key from Ford Performance and while the heads are a revised edition when compared to the previous Coyote Cobra Jet, the 2.9L supercharger has a forward facing throttle body that eliminates the unique bend into the rear of the blower on the 2013-2014 models.

Let it ride! Chuck Watson Sr. shattered the first record of many for the 2016 season. The Watson Racing crew tuned up the 2015 Mustang GT to a new best of 8.67 at 156 mph. That lowers the mark for IRS-equipped Mustangs, a record the team held previously with an 8.70 at 156 mph. The car sports a Watson-designed IRS setup out back with a Coyote 5.0L that was built in-house and has a Ford Racing/Whipple 2.9L supercharger.

The Fluid Turbo Concepts Turbo Coyote Shootout is back in action for this weekend and Blow By Racing fired the first shot across the bow of the class. The Hellion twin turbo combination dropped a 7.97 at 172 mph.

"Wild Bill Devine" of Bullseye Power loaded up his legendary Pro 5.0 car and headed south after Michigan got pounded with some more snow the other day. The car features a larger 427ci displacement and a new air shifter for the Liberty five-speed transmission. Another switch is in the back tire department with a new set of Mickey Thompson Bubba tires. Devine will be here all weekend making test hits to dial in the new equipment.