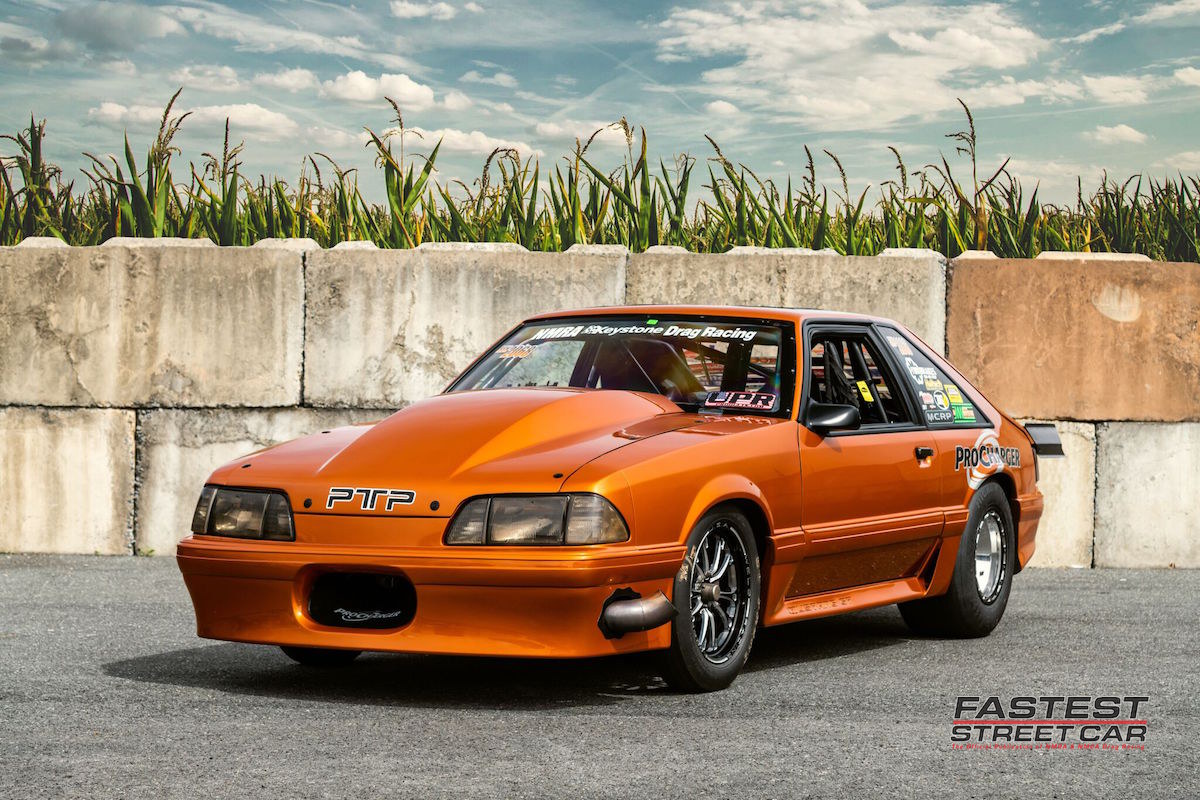 Story by Mary Lendzion and photos by Andrew Link and Fastest Street Car Staff While driving his 1990 Mustang to and from high school near his family's home in Milton, Pennsylvania, Adam Arndt would think about all of the modifications he wanted to make to it. Among them was an engine swap, so when he fried the four-banger that was in the car, he made plans to replace it with a 5.0L. Taking what he had learned from his father and what he had learned from flipping through motorsport magazines, he started turning wrenches and tackling whatever came up. Then, when the engine was in the engine bay, he headed to the track to test for the first time, and that's where his competitive spirit surfaced, as when his friend would find ways to go faster in his S-10, Arndt would find ways to go faster in his Mustang. Ready to get even rowdier in the racing world, Arndt, a firefighter near his home in Pennsburg, Pennsylvania and a firefighter for the U.S. Air Force, sold the car in 2007 and purchased a silver 1988 Mustang while stationed at Dover Air Force Base in Delaware. [gallery columns="2" size="medium" ids="9084,9085"] I found it on a website, and I thought it was a pretty cool little street car with a mild motor with basic bolt-ons and a supercharger, said Arndt. My friend, Matt Grieve, let me keep it at his house, and I spent a year stripping it and building it how I wanted to build it. That involved fabricating an 8.50 cage inside and building a 408 cubic-inch Ford small-block for the powertrain. As soon as the car was race-ready, Arndt headed to the track, where, instead of celebrating, he was cursing, as the hood flew off, smashed the windshield and damaged the car. Enter Joey Finan, who had met Arndt at the track and offered to help repair and then repaint the car. For the next few years, they spent every spare moment in Finan's garage working on the car before Finan laid beautiful Atomic Orange paint on it in 2010. I saw the color on a car when I was out driving one day, and I slammed on the brakes to take a better look at it because I liked it so much, said Arndt. I told Joey about it, and he had his doubts when he was spraying the base coat on the shell of the car, but once we got it clear-coated, baked, and out in the sun, he loved it as much as I did. A year later, while traveling to the NMRA season-opener at Bradenton Motorsports Park in Florida to work as a crewmember for friend and multi-time NMRA Edelbrock Renegade champion Brian Mitchell, Arndt mentioned that he had been tossing around the idea of joining NMRA Edelbrock Renegade. Without hesitating, Mitchell told him that he would help him however he could, and he did. 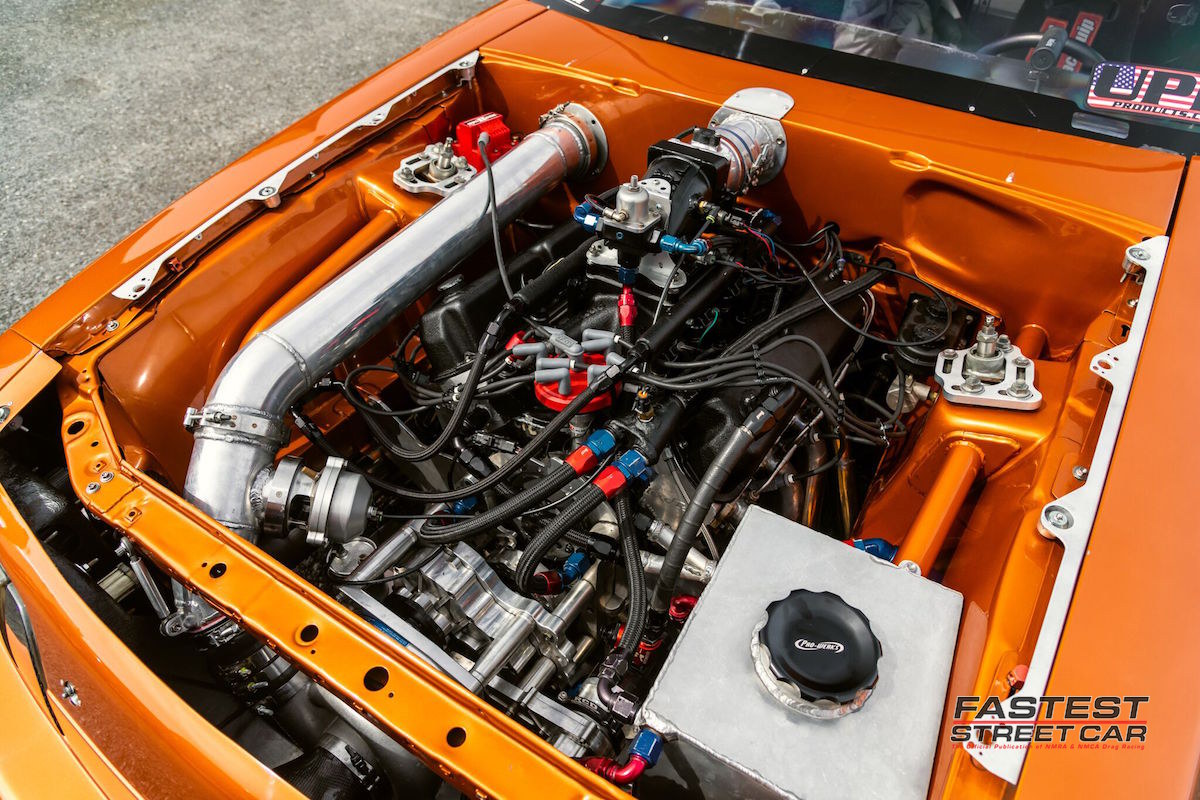 We got a used short-block and built it up to a 311 cubic-inch Ford, and I sourced some Edelbrock Victor Jr. heads and a Holley SysteMax intake, said Arndt. Brian suggested I talk with Mike Curcio of Mike Curcio Race Products about some fitment issues I was having with the engine, and I sent the heads to David Powell of HD Performance and he went through them, updated the port design, and freshened the valve job. I paired the engine with a Vortech supercharger, and I went with a C4 from Pro-Formance Transmissions and a Dynamic converter. To prepare his hotrod for additional horsepower, he removed its 8.50 cage and fabricated a chromoly 25.5 cage. I had bought a TIG welder from Brian, and I had watched videos on how to TIG weld because I really wanted to be able to do it myself, said Arndt. I was very focused on the quality of the weld because I knew it could be a matter of life or death. With that, Arndt headed to the NMRA event at Milan Dragway in Michigan in 2012 and made his NMRA Edelbrock Renegade debut with Finan as his crew chief with an assist from Mitchell. By the end of the year, he had run mid-eights and earned a seventh-place finish in points in the category. I struggled with some things, which was to be expected, but it felt good to prove that we were capable of being fast and competitive, said Arndt. Armed with everything he had learned in those few months, Arndt dove into 2013, where he was no stranger to setting the pace in qualifying and soared to a second-place finish in points. Brian had been giving my crew chief, Joey, and me so much input and so much information, and he helped me make decisions on whether to buy this or buy that, said Arndt. He also taught me how to race, and even how best to avoid crashing. 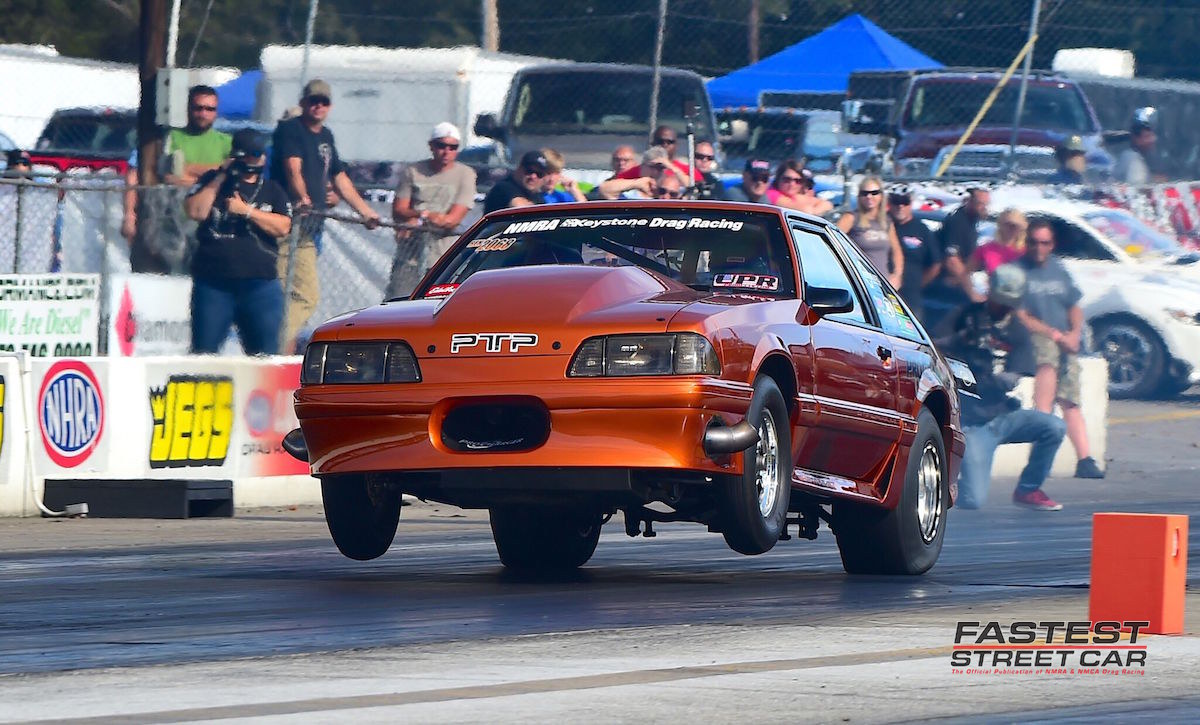 After replacing his Vortech supercharger with a ProCharger supercharger in 2014 and replacing his 311 cubic-inch Ford with what would eventually become a 360 cubic-inch piece that he and Curcio built in 2015, Arndt, who does his own tuning with input from Jason Lee and Patrick Barnhill of PTP Racing, worked to dial in the combination and drove to a sixth-place finish in NMRA Edelbrock Renegade points in each of those years. While his performance was perfectly commendable, he was decidedly dismayed during the dialing-in process. I know that it takes time to perfect a new combination, but because I've always had a competitive nature and because I had success early on, it was hard for me to face the fact that it was taking some time in 2014 and 2015, said Arndt, who had topped the engine with Edelbrock Victor Jr. heads and an Edelbrock Super Victor intake. I also know that in racing, if you let your guard down, someone will take over. With serious determination, however, he went on to secure a third-place finish in NMRA Edelbrock Renegade points in 2016. Then, knowing he was going to be deployed to the Middle East with the U.S. Air Force in 2017 and knowing that Mitchell's Mustang was undergoing work Arndt offered Mitchell the driver's seat of his car for 2017. When Mitchell accepted, Arndt, who also works on a part-time basis for Mike Curcio, partnered with Curcio to build for Mitchell a 390 cubic-inch Ford topped with Trick Flow High Port heads massaged by Curcio and an Edelbrock intake. They paired it with Arndt's ProCharger, Mitchell's Pro-Formance Transmissions-built Turbo 400 transmission and a Dynamic converter. Lee and Barnhill used Big Stuff 3 to design a tune and all of it helped Mitchell motor to a third-place finish in NMRA Edelbrock Renegade points in 2017. [gallery columns="2" size="medium" ids="9087,9086"] When his deployment was over, Arndt took over the wheel and wound up with a personal best of 7.34 and a semifinal finish at the Import. Vs. Domestic event at Maryland International Raceway last fall, and while he's stateside this year, he has turned the keys to his car back over to Mitchell, who led qualifying with a 7.39 at the 10th Annual NMRA/NMCA All-Star Nationals presented by Mahle Motorsport in April at Atlanta Dragway, and led qualifying with a 7.36 and finished as runner-up at the 18th Annual CJ Pony Parts NMRA Ford Motorsport Nationals presented by Vortech in May at Maple Grove Raceway in Pennsylvania. In recent years, Edelbrock Renegade a class that was started in the heyday of the Fox-body 5.0-liter Mustang has seen the number of Modular and Coyote V-8-powered cars continually rise, but Arndt and Mitchell have stayed the course with their pushrod-based powerplant. "Last year, the championship was won by a pushrod blower car, and Brian Mitchell finished third in points, making two out of the top three combos pushrod blower cars, Arndt said. So far this year, in the two events we've showed up to with the car, we've qualified number one and have a runner-up finish. While we have lost to the same grey turbo Mod motor car the last three events, they haven't beaten us. We've beaten ourselves. Whether it be mechanical issues or a tuning error on my part, they have just been there to take advantage of our mistakes. That said, Arndt is aware of what he needs to do going forward. We are consistently faster to the 60-foot by a good margin and I am learning that when pushing the car that hard, sometimes I need to back the power down a little and go A-B," said Arndt. "The car has 60-footed from 1.10-1.13, except for one spin at the worst possible time, every pass this year, even in the heat of the day. Those 60-foots have kept the car out in front of the field without leaning on the motor. The spin in the finals at Maple Grove made me realize that it's time to slow the front half of the track down a little and start putting some power in the tuneup and show everyone what this combo is truly capable of. In addition to handling the tuning of the car, Arndt also puts in the elbow grease, too. While the class is evolving, I've consistently kept a pushrod blower car at the front of the field by doing 99 percent of the work myself, from porting heads and building headers to chassis and cage work, and that's something that not many people can say," said Arndt. "And although my turn in the winner's circle hasn't come yet, it will, and all my hard work will make it that much sweeter. The pushrod blower combo is just what I know and feel that I have the best chance to win with." Arndt, who will see seat-time at various Ultra Street races, also will help his fianc , Krista Elyse, campaign her 2010 Mustang in NMRA Richmond Gear Factory Stock. I'm happy with this set-up, with my helping Brian with my car and helping Krista with her car, said Arndt. It's very exciting to me, and I'd really like to see both drivers win in the capable cars. 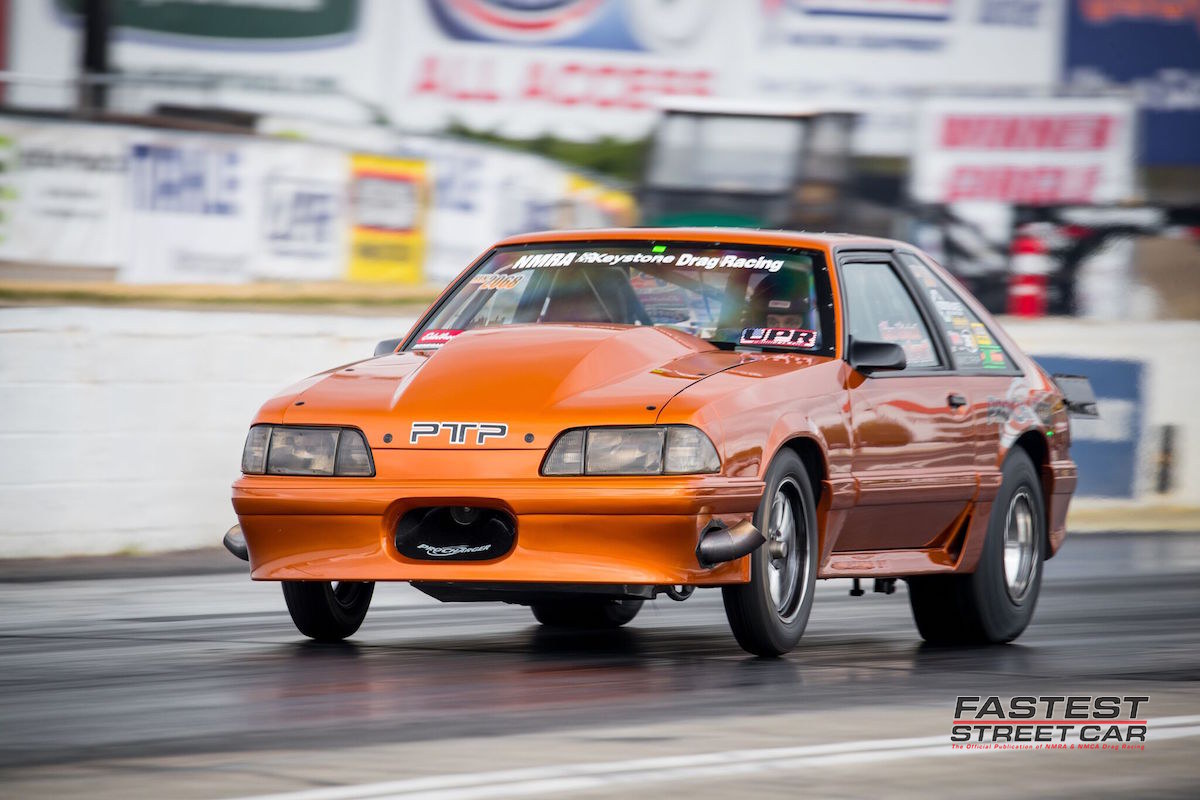 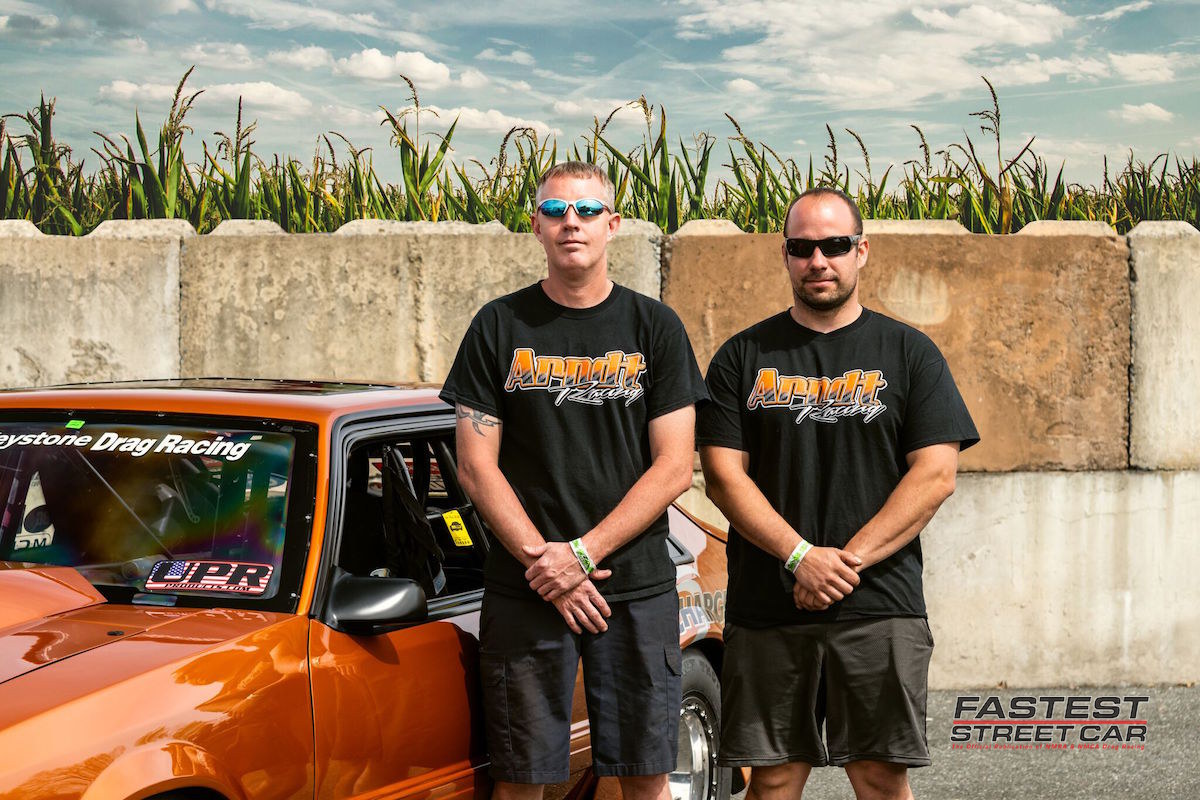