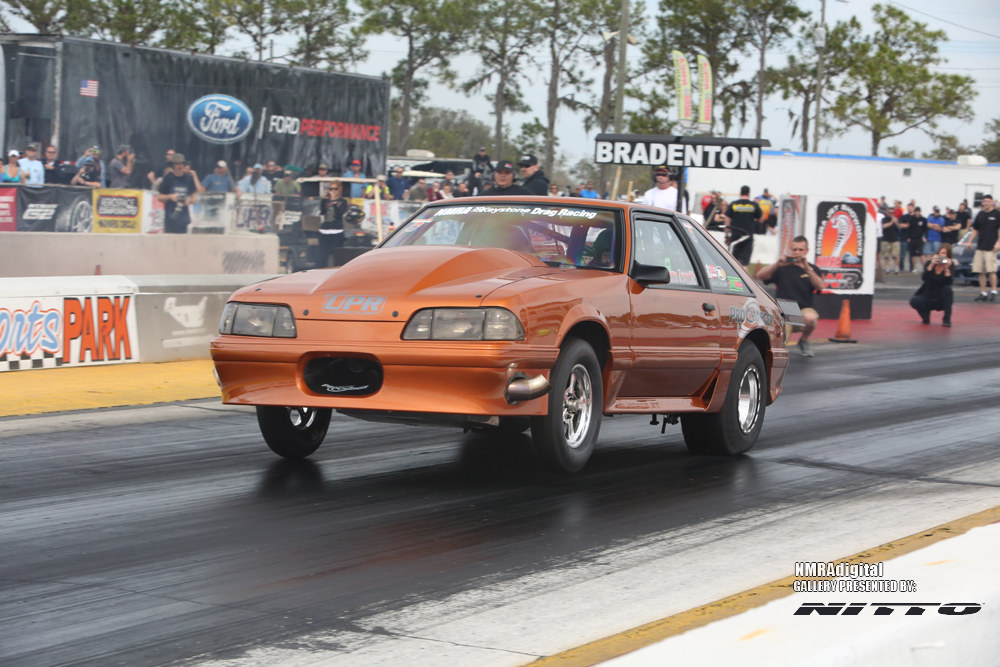 When asked how his 2016 race season has gone so far, NMRA Edelbrock Renegade driver Adam Arndt pauses for a moment before saying that it has had its ups and downs, and that he's looking for it to get better. At the 22nd Annual Nitto NMRA Spring Break Shootout at Bradenton Motorsports Park in Florida in March, he qualified in the top spot with a 7.48 and 181 mph, but asked too much of his transmission in the second round of eliminations, ending his weekend. At the 8th Annual Borla NMRA/NMCA All Star Nationals at Atlanta Dragway in April, he qualified sixth with a 7.85 and 150 mph with no test-time on his recently modified Frank Lupo's Pro-Formance Transmissions-built Turbo 400, and advanced to the second round before losing the race at the same time he lost a water pump. That subsequently hurt his 352 cubic-inch small-block Ford, which is built around a Dart Iron Eagle block, wears Edelbrock Victor Jr. heads and Edelbrock Super Victor intake and is amped up by a ProCharger F1C 10.5. One head had been torched out to the combustion chamber, and the other head required massive reconstruction of two combustion chambers, said Arndt, of Allentown, Pennsylvania. The block was nipped a bit, and had to be honed out five thousandths and receive new pistons and rings. While he and engine-builder Mike Curcio of MCRP worked to repair and rebuild his engine, he borrowed one from fellow NMRA racer Brian Mitchell in order to make the 16th Annual WyoTech NMRA Ford Motorsport Nationals at Maple Grove Raceway in Pennsylvania in late April. There, he qualified fifth with a 7.69 at 175 mph and had a solo run in the first round of eliminations, and will finish the rain-shortened race at this weekend's highly anticipated 13th Annual NMRA Ford Super Nationals, June 9-12, 2016 at National Trail Raceway, Hebron, Ohio. But rather than having Mitchell's engine in the engine bay of his Fox body Mustang which rolls on 275 Mickey Thompson ET Street Radial Pros he'll have his own engine, which is now 355 cubic-inches after its clean up. Arndt, who has run a best of 7.48 at 181 mph in the quarter-mile, shook down the stout rebuilt engine in a series of eighth-mile passes at the Outlaw Street Car Shootout at Cecil County Dragway in Maryland on June 4, 2016, and uncorked a 4.83 at 146 mph, replacing his previous best eighth-mile elapsed-time of 4.84. Additionally, he achieved a 1.17 60-foot,'replacing his previous best 60-foot time of 1.20. In addition to being happy with the engine, we're happy about making progress with the 60-foot, said Arndt, who relies on Big Stuff 3 to cultivate his combination, while consulting with Jason Lee and Patrick Barnhill of PTP Racing about power management. I've always had horsepower, but everyone had been running better than me in the 60-foot and I had been making it up down track. Now that we're learning what the car needs to hit the tire, I think the car should be lethal.