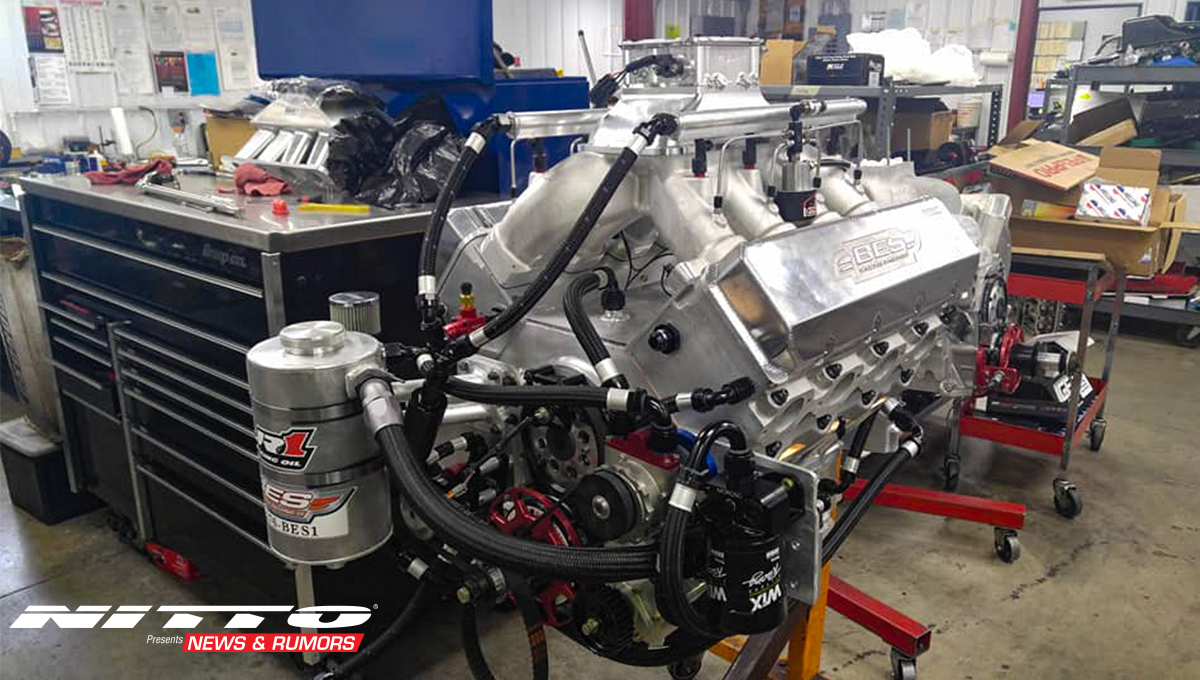 Last year longtime NMRA racer Nick Bacalis teamed up with Tony Bischoff to field the most unique entry in the wild and crazy 275 wars of VP Racing Fuels/Vortech Street Outlaw. A 1998 Mustang was fitted with a naturally aspirated 700ci big-block Ford that is based on a 5-inch bore space engine package. The au naturale status of the engine wasn't the most unique aspect of the combination, it was the induction system as it consisted of a carbon fiber hat off an A/Fuel dragster. The carbon fiber hat acted as a throttle body and fed air to a custom BES Racing sheetmetal intake. A Holley EFI Dominator handled the fuel management side of the equation and provided tools for the team to manage the power heading back to the Mickey Thompson ET Radial Pro 275 tires. For 2018, the team is coming back to NMRA and NMCA competitions and it is bringing along a slightly modified combination. According to Bacalis, the short-block remains mostly intact save for a new set of Ross custom pistons designed for nitrous use and a larger Bryant billet crankshaft, swelling the engine to 738ci. The same BES Pro Stock Wedge heads sit on top of the LSM billet block but were run through porting room at BES Racing over the winter and a set of Victory titanium valves were installed. The valvetrain is a rather bold setup with valve lift on the Comp camshaft coming in around 1.200-inches! Keeping the massive camshaft under control is the job of Jesel rocker arms, Manton pushrods, Manley hardware, and PSI valvesprings. Bacalis said the induction system is going to be a bit more traditional in 2018 as an Edelbrock cast intake manifold was selected over the previous sheetmetal intake option. The category allows for a weight break for the use of a cast intake on nitrous-injected combinations. The team did ditch the A/Fuel snorkel/throttle body and replaced it with a single VED Racing billet throttle body. Induction Solutions was tapped to add a single stage of nitrous to the intake manifold and it will all be controlled through the Holley EFI Dominator. As for the Mustang, Bacalis said two major changes were made to the vehicle itself in preparation for the larger and more powerful 738ci powerplant. The first was inside the transmission where a new Ultimate Converter Concepts torque converter was slipped into place. The other were modification was to the Menscer Motorsports shocks and struts due to the heavier weight and new power curve. Bacalis and Bischoff are putting the finishing touches on the new combination and will be attending the 12th annual NMRA/NMCA All-Star Nationals, presented by MAHLE Motorsport this weekend at Atlanta Dragway in Commerce, Georgia.
BES Racing
,
Holley EFI
,
Induction Solutions
,
JR1 Oil
,
Menscer Motorsports
,
VP Racing Fuels