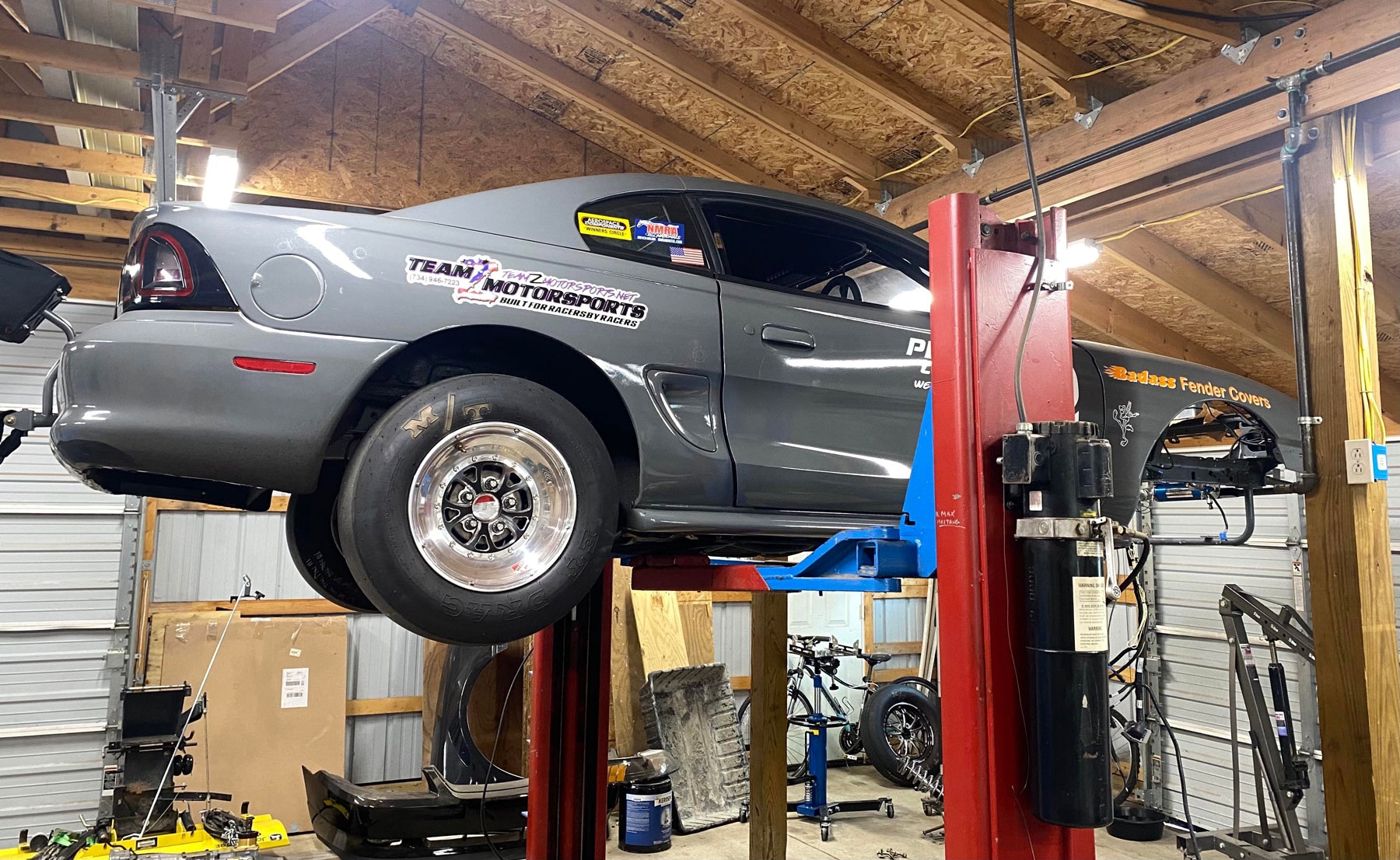 A familiar face in the raucous, rowdy ranks of NMRA G-Force Transmission Coyote Stock, Kevin McMullin is making big moves for 2023 in search of quicker timeslips. Over the off-season, he will transform his “Off the Wall” 1994 Ford Mustang into an NMRA JDM Engineering Limited Street all-motor monster.

McMullin, who calls Michigan his home, had been toying with the idea of making a move up since late in 2021. As he had been splitting his time between NMRA competition and a local series where he had, admittedly, “been bringing a knife to a gunfight” against the more powerful turbocharged and supercharged entries, the jovial racer wanted to maximize his racing opportunities.

Certain that he wanted to stick with his NMRA family, McMullin looked at the rules for Limited Street and realized he could be competitive even while sticking with his beloved naturally aspirated, stick shift Coyote combination. To get going, McMullin collaborated with Tim and Tyler Eichhorn of MPR Racing Engines to develop a plan for an engine program, centered around a Coyote of course. Knowing parts have been difficult to obtain due to global shortages, McMullin started stockpiling things he would need. “I had an engine block, set of cylinder heads, and other parts,” noted the driver. “I threw everything in the trailer and brought it to the NMRA Bradenton race [in March of 2022] to give to the Eichhorns and they took it back to their shop.”

MPR Racing Engines got to work assembling the 339 cubic inch Coyote that will spin up to around 11,000 RPM. “Another big change is that while I’m sticking with G-Force for the transmission, I’m going from the H-pattern G101A 4-speed to their clutchless GF5R 5-speed,” noted McMullin, who is looking forward to the switch.

Although he spent the 2022 season still having a blast in NMRA G-Force Transmissions Coyote Stock, when the year wrapped up, McMullin immediately put his SN95 up on the lift in his home garage. He wasted no time tearing it apart in preparation for JDM Engineering Limited Street, but it was a bittersweet moment when he yanked the sealed-stock Coyote Stock-spec powerplant. Fortunately, the engine already found it a good home with a new racer looking to fill McMullin’s vacant space in Coyote Stock.

In addition to the big engine and transmission changes, McMullin has also added several other “go faster” parts such as a parachute and will have his roll cage updated to 25.5 SFI specs. “Sondra Leslie helped me get some suspension parts and rear coilovers from Strange Engineering,” he added gratefully. “She also helped me find some of the wiring harnesses I needed for my new Holley Dominator EFI setup.” McMullin has also enlisted tuning assistance from the 2022 NMRA JDM Engineering Limited Street champion, Samantha Moore of Vector Motorsports. In Coyote Stock, McMullin had been able to run at a weight of 3,000 pounds. However, for Limited Street, the rules permit that he can run as light as 2,350 pounds. “I don’t even know if I can get it there. There’s NHRA Pro Stock weight. Tube chassis stuff,” laughed the man who is doing his part to help by keeping an eye on his own scale since his Mustang has been put on a strict diet. “But, it’ll still do big wheelies off the line.”

McMullin’s naturally aspirated engine makes him eligible to run a carbon fiber hood and trunk as well as Optic Armor front and rear windshields [which he already had], however, he’s also now able to add carbon fiber doors, Lexan side windows, a carbon front fascia, and more including a carbon fiber dash. He expects the svelte Ford to tip the scales at a final weight of around 2,400-pounds.

Typically, an off-season for the racer consisted mostly of just general maintenance and a few tweaks here and there, but McMullin knows he’s going to be busy in the coming months if he wants to make his Limited Street debut happen sooner than later. “If the engine is ready in time, we’ll be in Florida for the season opener… but it depends on the supply chain. If not, we’ll push for North Carolina,” he affirmed. Ultimately, McMullin knows that 2023 will be simply a “learning year” for him as he departs from the fun and familiarity of his Coyote Stock crowd. He has no expectations of “setting the world on fire,” either, as his primary goal is simply to sort out the new combination and get into the low 8-second zone – even though he knows the rest of the class will likely soon see 7.8-second or even 7.7-second runs.

“Stick shift racing is really hot right now. Coyote Stock was a lot of fun – it’s a great class with great people and I really love the concept and the tight racing – but outside of that, there’s a great big world of racing I want to enjoy,” noted McMullin, who his eyes set towards an exciting future with Limited Street.