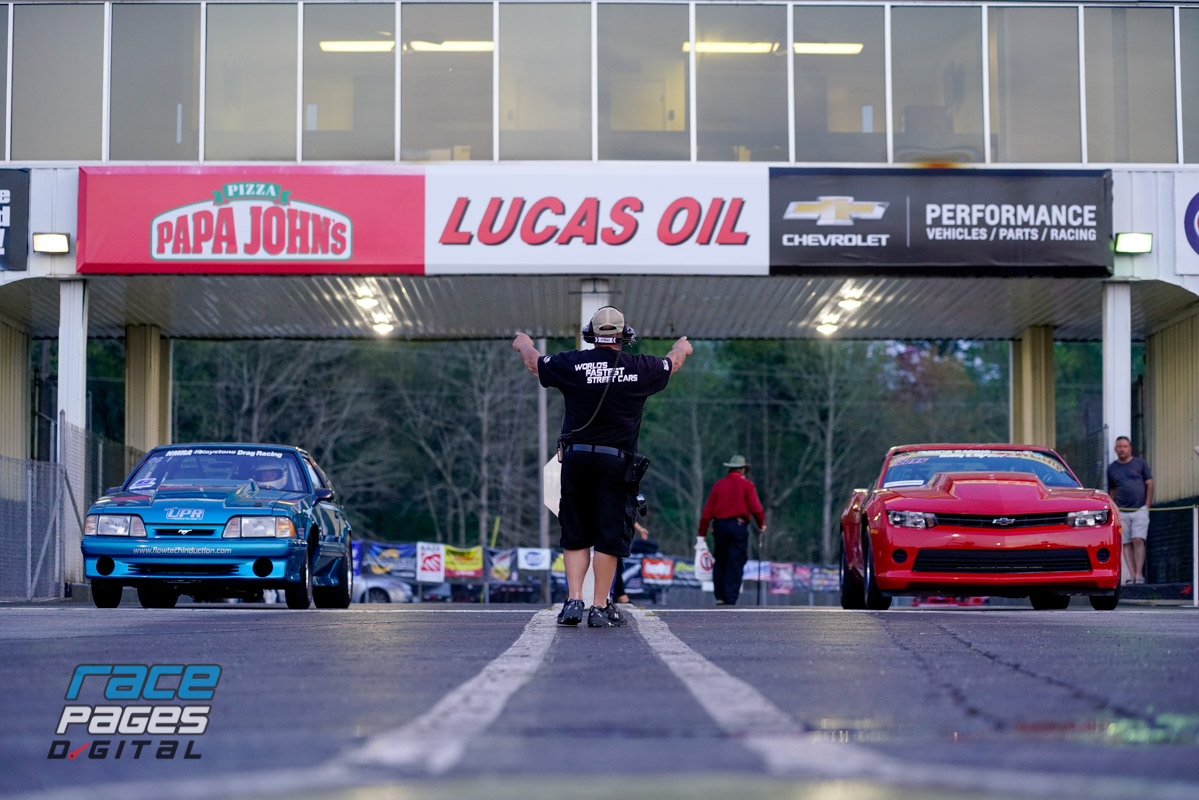 The Sealed Stock All-Star Shootout held during the 11th Annual Scoggin-Dickey Parts Center NMRA/NMCA All-Star Nationals presented by MAHLE Motorsport held at Atlanta Dragway in April has become a much talked about part of the racing season as it pits NMRA G-Force Racing Transmissions Coyote Stock racers against Chevrolet Performance Stock presented by Scoggin-Dickey Parts Center racers, Ford crate engines versus Chevrolet crate engines, and for the most part, Mustangs versus Camaros. During the very first shootout in 2016, the final round delivered a desirable Chevy versus Ford battle with Joe Marini and his Mustang taking out Ronnie Hackelton and his Camaro on a hole shot. For the 2017 shootout, the Coyote-powered contingent turned things up as the final round was all-Mustangs. Shane Stymiest in his Fox-Body Mustang defeated Tim Matherly and his new-edge SN95 Mustang, but just as the tide ebbs and flows, so do the final round competitors in the All-Star Shootout. For 2018, it was Jesse Wilson who was victorious over Haley Rounsavall (now Burkhammer) in an all-Fifth-Gen Camaro final round. As Coyote Stock racers seemed to struggle with a recent calibration change from the folks at Ford Performance at the start of the 2019 season, the Chevrolet Performance Stock racers took advantage of the opportunity. Wilson was a shoe-in to go all the way, as he was the Chevrolet Performance Stock champion for 2018 and was once again setting the pace for the class in 2019. On the other side of the ladder, though, the Mustangs were charging hard and Darin Hendricks wheeled his 1993 Cobra to the final round to meet Mr. Wilson. As exciting as it is to watch the Coyote Stock racers bang gears and hang the front wheels out, it's not all fun and games for the Chevrolet Performance Stock racers. Though the class remains an -all-automatic-transmission affair, racers shift the transmissions manually, and do occasionally miss-time a shift. When they do, it's an ET killer as the engine tags the rev limiter, cuts timing, and closes the throttle blade for a loss of around 2 tenths. Wilson has been on point, though and he was ahead when the lights turned green during the final-round battle. Wilson was .050 to Hendricks' .106, and from there, he powered away to take the stripe first with a 10.16 to Hendricks' 10.22 elapsed time, making it two Sealed Stock All-Star Shootout wins in a row for the Muncie, Indiana, racer and his bright red Camaro. Check out this photo gallery we put together of all of the G-Force Racing Coyote Stock and Chevrolet Performance Stock racers. Maybe you can guess who the winners of the next Sealed Stock All-Star Shootout will be. [envira-gallery id="11890"]
Chevrolet Performance
,
Chevrolet Performance Stock
,
Darin Hendricks
,
G-Force Racing Transmissions
,
Jesse Wilson
,
Sealed Stock Shootout