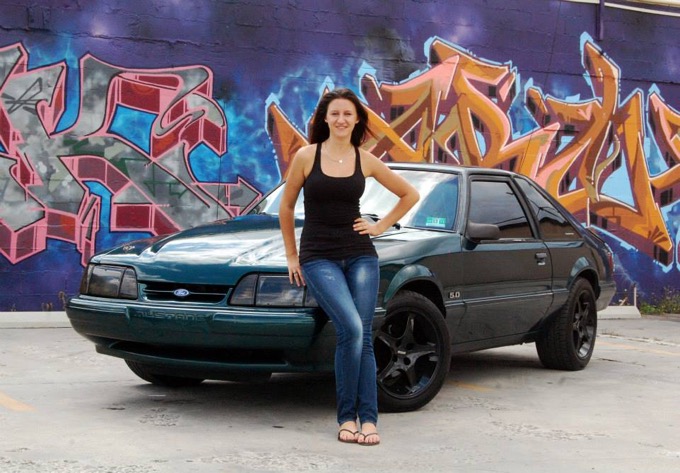 There's an enormous amount of energy and excitement surrounding the NMRA's new Ford Muscle category, and adding to it is Steph Davies, who will throw her hat into the ring at the 22nd Annual NMRA Nitto Spring Break Shootout, March 3-6, 2016, at Bradenton Motorsports Park. For the category designed for footbrakers and their 1955 and newer Fords running 9.50-15.50 indexes, Davies will be armed with a 92 Mustang built in-house at Roush Performance in Plymouth, Michigan featuring a 2012 Coyote engine, a control pack from Ford Performance Parts and a Roush TVS 2.3 Liter Phase 2 supercharger. A Performance Automatic C4 transmission will help transfer power to the pavement and ensuring that the car reacts and rolls just right is a Maximum Motorsports suspension, stock 8.8 rear-end housing with Strange Engineering components and a Detroit Locker assembled by Steve Fackender. Exhaust will exit through BBK headers, and while Davies hasn't decided which kind of tires will wrap her new JMS Avenger black chrome wheels, she has decided that hydroboost brakes from an SN95 Mustang will bring her to a stop at the end of the quarter-mile. A six-point cage is in place to provide protection as well as to stiffen the chassis of the car which will be tuned by Roush Performance and continue to see street-time. When I go to the parts store, the salesperson asks how many different Mustangs I'm working on because I'm buying parts from a 2012 Mustang, an SN95 Mustang and a 92 Mustang, said Davies, Roush Performance shows and events coordinator. On top of that, some things are metric and some things are standard. The car will soon be wrapped in black and red vinyl and delivered to Bradenton, Florida, where Davies will take part in pre-race testing to dial it in for the category's 10.00 index with an assist from Brent White and his crew from Brenspeed, who will support her through the season. We've been working twelve-hour days on this car, and I'm very excited, said Davies. "It's a cool opportunity because Roush Performance is adding me to the Roush racing ranks to join Susan Roush McClenaghan and her accomplished team, so I hope I can do them some justice. Davies, who's focused on staying in the moment to ward off nerves, has indicated that she's in for all six events in the series. I eventually want to run Coyote Modified, but it will be a couple of years before the car is competitive enough for that, said Davies. So this will be a good rookie class for me, and I can grow from here. I'm looking forward to it.