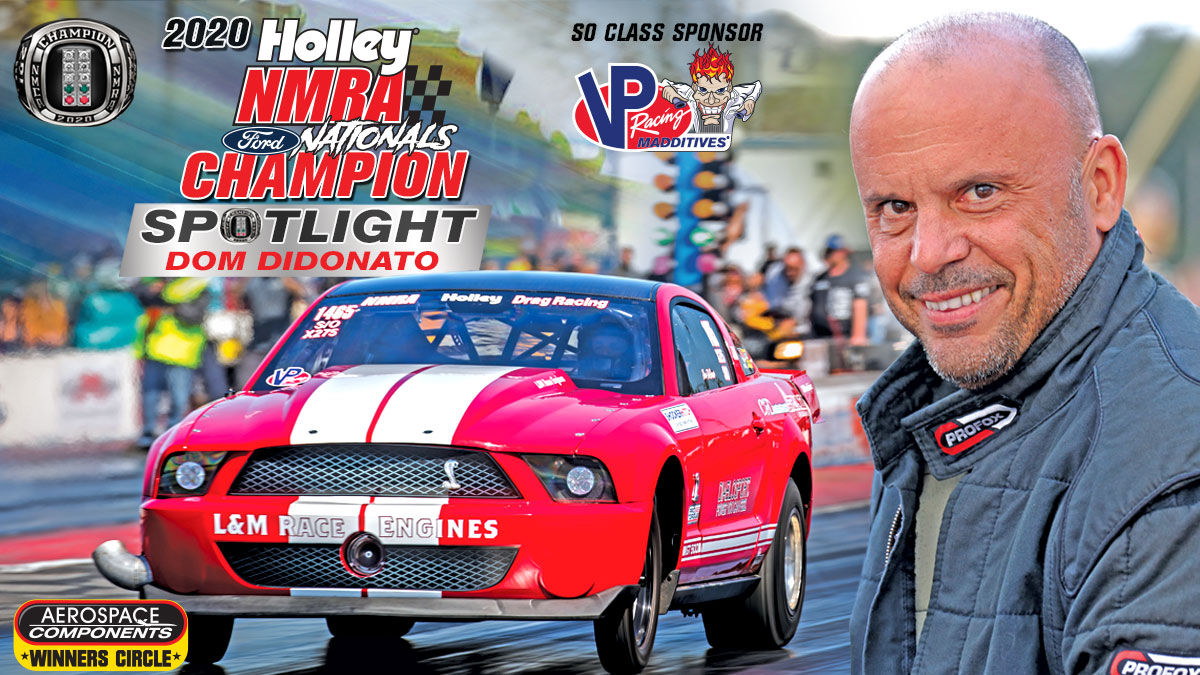 By Mary Lendzion While Dom DiDonato was a fierce competitor in NMRA Edelbrock Renegade, he decided to turn his focus to VP Racing Madditives Street Outlaw last year. It was a worthwhile and wicked move, as he wheeled to a second-place finish in points despite being a newcomer in the incredibly competitive category, and while that was laudable, he wanted to lead points this year.

DiDonato got off to a good start, as he qualified in the fourth spot with a 4.35 and went all the way to the Aerospace Components Winner's Circle with a 5.09 at the series season-opener, the 26th Annual Nitto NMRA Spring Break Shootout, which was Feb. 27-March 1 at Bradenton Motorsports Park in Florida. That proved, early on, that he and his Mustang GT500 powered by a 5.8L Modular engine and Forced Inductions 88mm turbo, were on point. The dedicated driver went on to qualify in the sixth spot with a 4.51 and stayed in the race until the semifinal round of eliminations before being forced to lift to a 6.87 at the 12th Annual Scoggin-Dickey Parts Center NMRA/NMCA All-Star Nationals, in June at Atlanta Dragway. He then set the pace in qualifying with a 4.32 and wrapped up another win, this time with a 4.81, at the Nitto Tire NMRA/NMCA Super Bowl presented by HPJ Performance in early August at World Wide Technology Raceway in Illinois.

With only two events left on this year's tour, DiDonato, who owns Domenic DiDonato Plumbing & Heating Inc. and DiDonato Performance in Delaware, stayed focused, and qualified in the third spot with a 4.36 and went two rounds before exiting eliminations with a 4.52 at the Arrington Performance NMRA/NMCA All-American Nationals presented by Force Engineering in late August at U.S. 131 Motorsports Park in Martin, Michigan. The pressure was on, but he pushed through to qualify in the second spot with a 4.28 and to round up a runner-up finish with a 4.46 at the season-ending NMRA All-Ford World Finals featuring the Holley Intergalactic Ford Festival, in late September at Beech Bend Raceway in Kentucky. And, with that, DiDonato was able to sit back and soak in the fact that he had earned the 2020 NMRA VP Racing Madditives Street Outlaw championship, which was not an easy feat considering the competition in the category. While the Coronavirus pandemic prevented NMRA from having its annual ceremony to celebrate champions, each was invited to share the words they would have shared on stage in front of their fellow racers, family and friends. HOW DOES IT FEEL TO HAVE EARNED A CHAMPIONSHIP DURING SUCH AN UNUSUAL SEASON Awesome. There was a lot of competition, and they made me earn it. WHAT WAS THE BIGGEST CHALLENGE YOU OVERCAME ON YOUR WAY TO EARNING THE CHAMPIONSHIP Tony Hobson, and running in the heat of the day. WHICH FAMILY MEMBERS AND FRIENDS WOULD YOU LIKE TO THANK FOR SUPPORTING YOU ALONG THE WAY My wife, Joann, daughter, Melissa, and dad, Carmen who is my crew chief. WHICH SPONSORS WOULD YOU LIKE TO ACKNOWLEDGE Forced Inductions, Shocker Hitch, DiabloSport, L&M Engines, Inc., Triangle Speed Shop, Racecraft Inc., UPR Products, NLR Control Products, ProTorque, Proformance Racing Transmissions, Rhodes Custom Auto, M&M Transmission, TBM Brakes, Holley Performance Products, Menscer Motorsports, PNR Welding, Ford 8 and 9 Inch Rears WHAT DO YOU ENJOY ABOUT RACING IN NMCA VP RACING LUBRICANTS STREET OUTLAW How well organized it's run.
2020 NMRA Champions
,
DiabloSport
,
Forced Inductions
,
Holley Performance Products
,
Inc.
,
L&M Engines
,
M&M Transmission
,
Menscer Motorsports
,
NLR Control Products
,
PNR Welding
,
Proformance Racing Transmissions
,
ProTorque
,
Racecraft Inc.
,
Rhodes Custom Auto
,
Shock