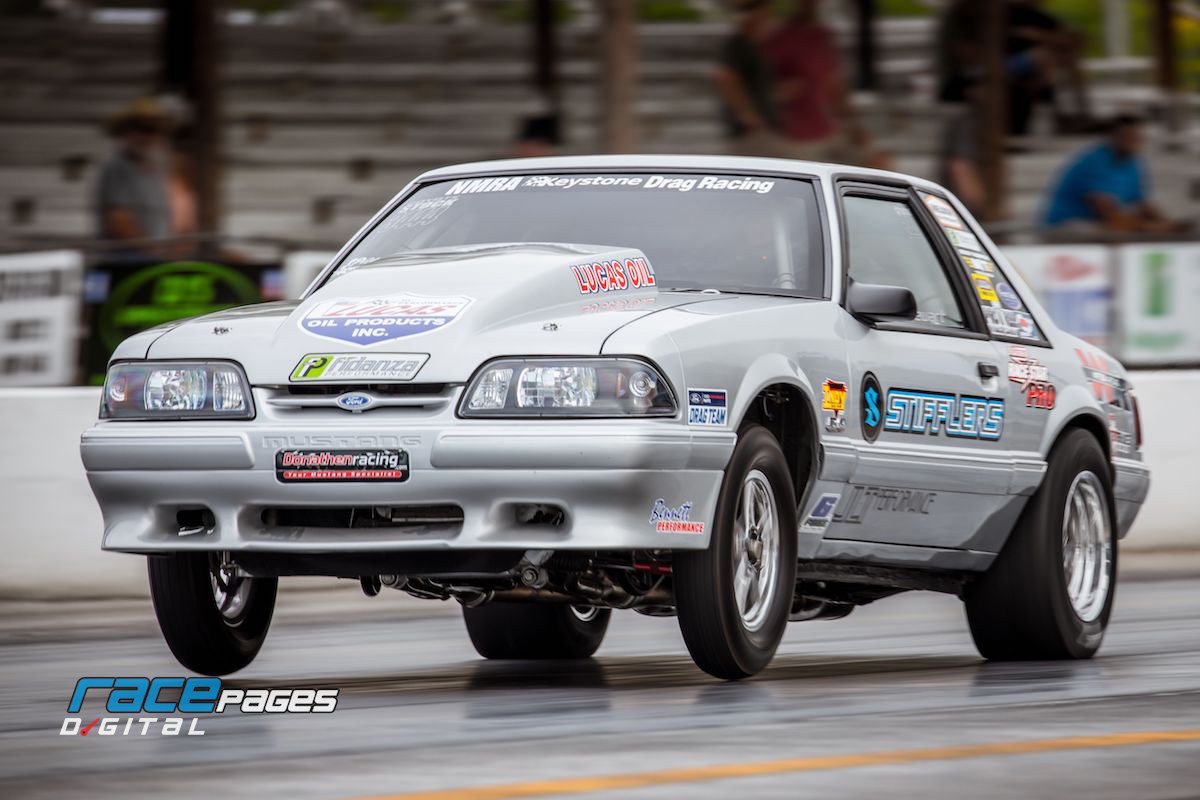 By Mary Lendzion Drew Lyons has accomplished a lot in the nearly fifteen years that he has been racing his Mustang. He has won many rounds and races, set records and earned two championships in NMRA G-Force Racing Transmissions Coyote Stock while riding out wheelies and rowing gears. He and his Mustang are a match, and that's why it came as a surprise to some fans when he accepted fellow NMRA G-Force Racing Transmissions Coyote Stock driver Clair Stewart's invitation to drive his Mustang in the category this year. Having never driven the car, Lyons loaded it up for the NMRA's season-opener, the 26th Annual Nitto NMRA Spring Break Shootout, which was Feb. 27-March 1 at Bradenton Motorsports Park in Florida. He had just three test passes to get acclimated to the car powered by a Gen II Coyote engine and a G-Force G101A transmission. I have had a very repetitive routine in my car for many years, so it was a little bit of a learning curve to show up in Clair's car, even though my car and his car have comparable combinations, said Lyons. To help me feel more at home, I put my own removable steering wheel in Clair's car, but some of the other minor differences, like the datalogger arming procedure, and shift light location, made the routine just a little different for me. Fortunately, when I got to the waterbox and did the first burnout, then got to the starting line and launched, the adrenaline got going, and I had no trouble hitting the shifts, and the jitters went away. 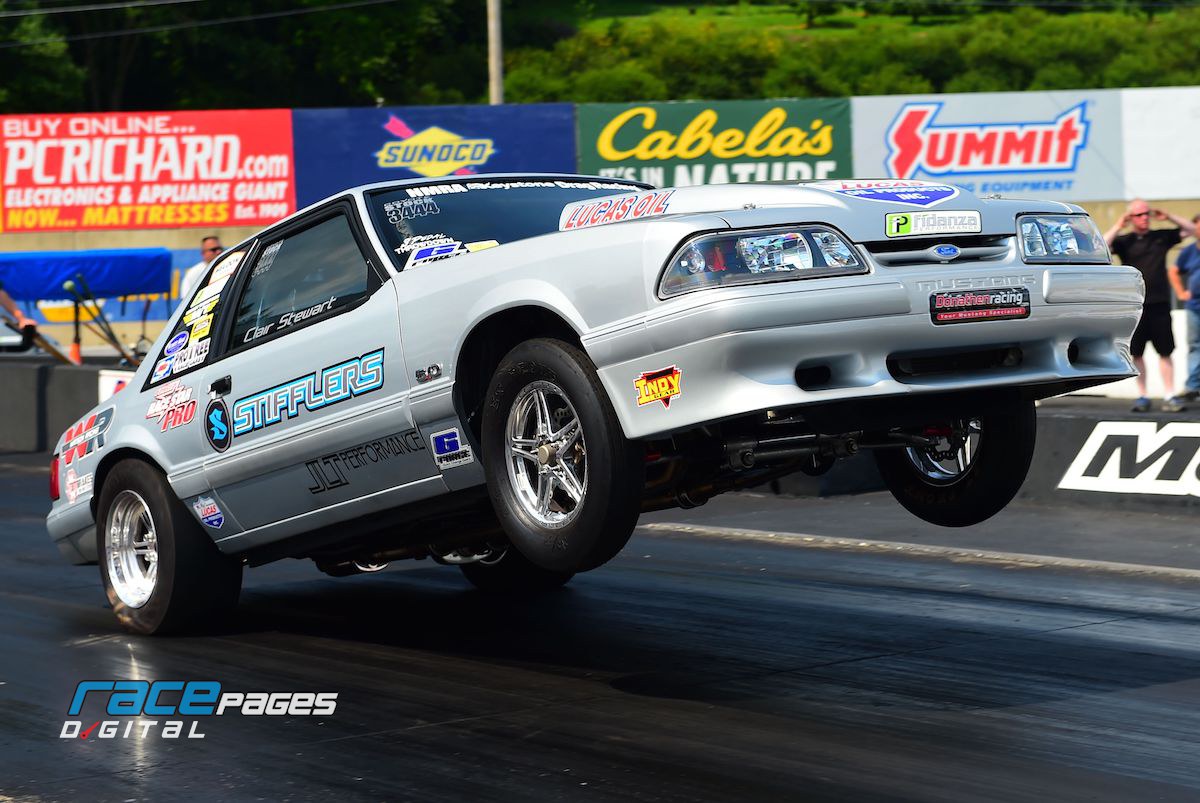 The jitters went away, indeed, as Lyons pushed to a 10.02 to qualify in the fifth spot, not far behind Frank Paultanis, who pushed to a record-setting 9.92 to set the pace in the category. I was super-excited about qualifying with a 10.02, said Lyons. It's quicker than Clair had gone in his own car, which we had fun pointing out, but we did have very good weather conditions that helped us do that. Confident in the cockpit of the car, Lyons went on to a 10.10 to win the first round of eliminations against Chad Stephens, and a 10.19 to win the second round of eliminations after Tim Matherly turned on the red light. Lyons knew that he would have to hit the tree hard in order to have a chance to take out lead qualifier Paultanis in the semifinal, and he had an .010 reaction time up his sleeve. While that made for a tight race on the top end, Paultanis pulled ahead with a 10.06 to Lyons 10.18. The race went surprisingly well for me considering I was in a car that was new to me and that I had never been down track in, said Lyons, who uses an Ace Clutch massaged by Black Magic Clutches in his car and had help from Eddie Bennett in setting up the Fidanza clutch in Stewart's car. It was fun. We were all champing at the bit to be the first to run 9s, and I was close. It was definitely a good weekend. Ready to roll into another race, Lyons will head to the Factory Hot Rods event, along with some of his fellow NMRA G-Force Racing Transmissions Coyote Stock racers, as well as some NMRA Richmond Gear Factory Stock drivers and some NMCA Chevrolet Performance Stock presented by Scoggin-Dickey Parts Center drivers, May 16, at Kentucky Dragway. Then, Lyons, who's currently third in NMRA G-Force Racing Transmissions Coyote Stock points, will try to hold onto, or improve upon, that at the Scoggin-Dickey Parts Center NMRA/NMCA Power Festival presented by HPJ Performance, May 28-31, at World Wide Technology Raceway in Madison, Illinois. 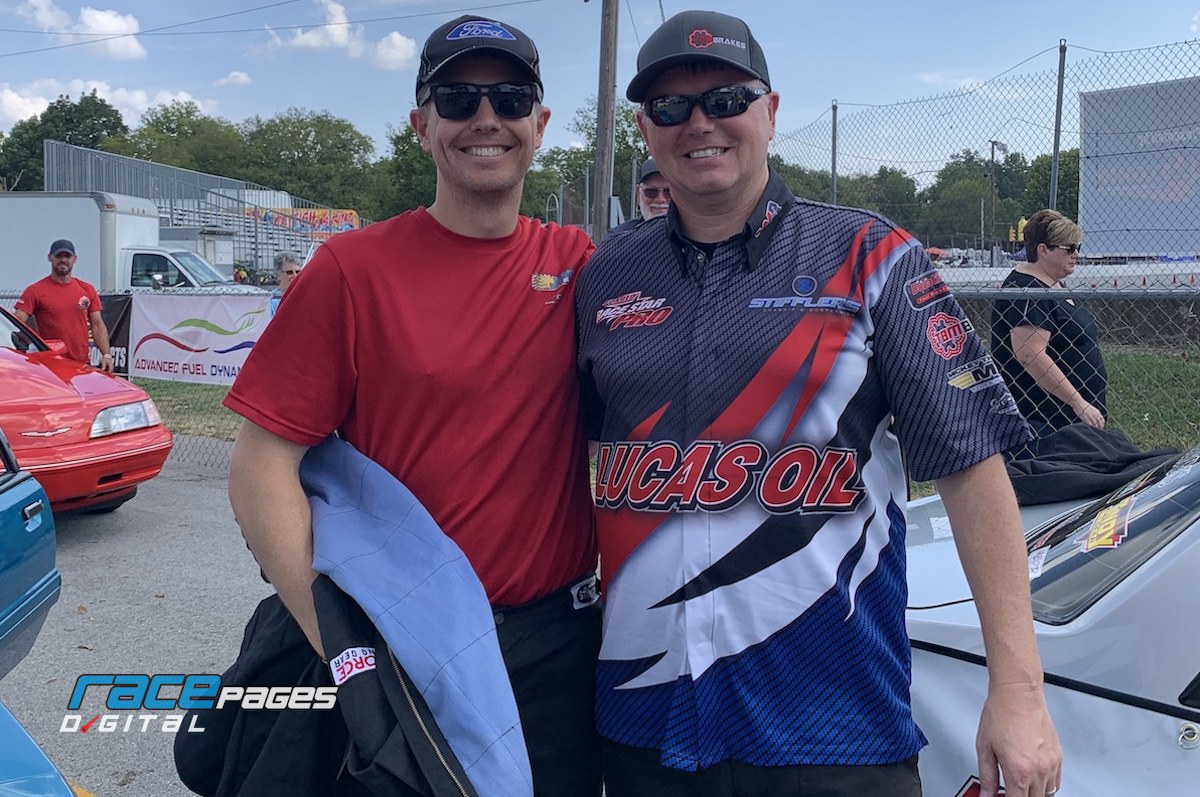