Dwayne James: Inspired by Innovation and Driven by Determination 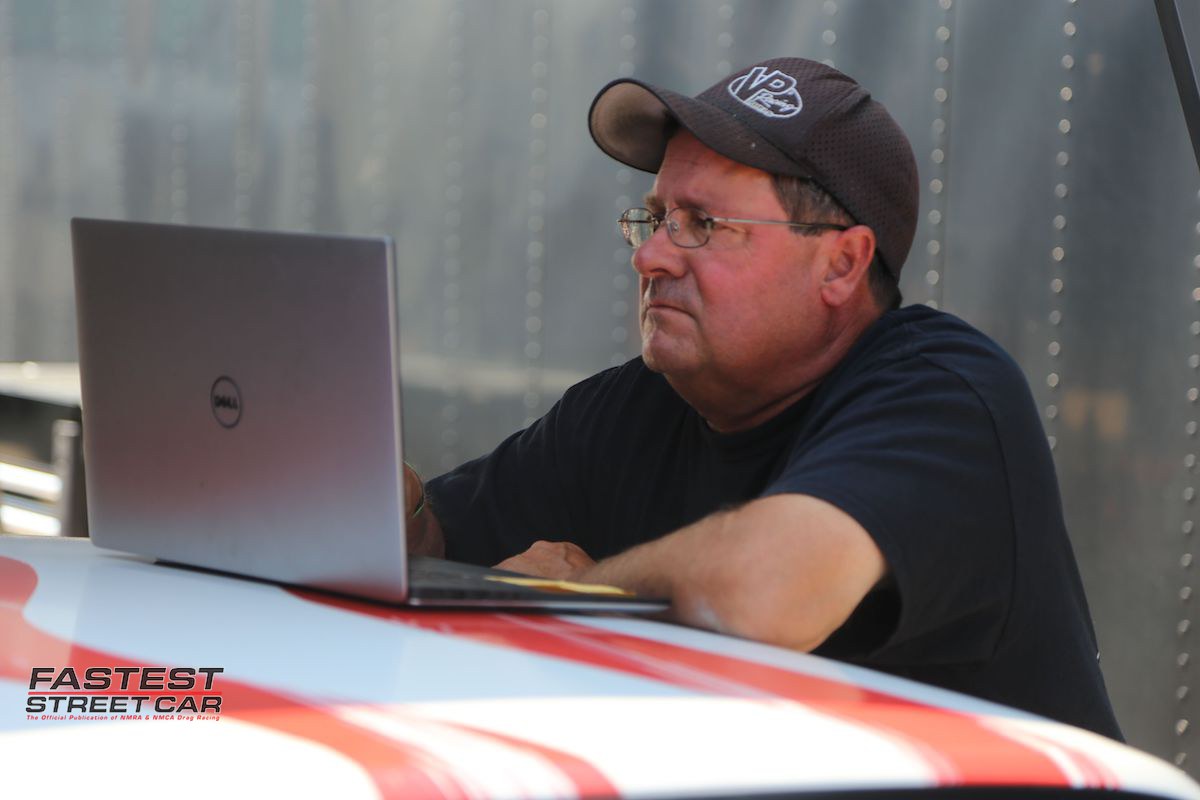 Interview by Mary Lendzion Photos by Fastest Street Car Staff Back when Dwayne James was racing in NMRA Pro Outlaw 10.5 and Super Street Outlaw, he was a crackerjack when it came to coaxing colossal amounts of horsepower from various combinations. It didn't matter whether they included turbos or blowers, as long as he stopped the clocks where he wanted to stop the clocks. The process and the personal bests were a source of pride, and in addition to being seen by countless fans across the country, they were seen by his daughter, Haley, who happily spent her childhood at his side at tracks. As the years went on and James realized that his daughter wanted to race, and that she would be wicked behind the wheel, he built a car with her and became her crew chief, and as testimony to their tremendous talent, she went on to earn championships in NMRA ProCharger Coyote Modified in 2015 and 2018, and NMRA Edelbrock Renegade in 2019. In addition to turning wrenches and turning heads, James shares with his dedicated and diehard daughter his way of thinking and tackling something, what worked and what didn't work for him when he was strapping into his six-second Mustang, and what he wishes he knew when he was her age. He also helps other racers with welding, wiring or whatever they need. Read on for more about James, who raced motorcycles before he raced cars and is a licensed pilot. He lives in Albuquerque, New Mexico, where he works as a sports turf professional and co-owns Hellion Power Systems with John Urist. 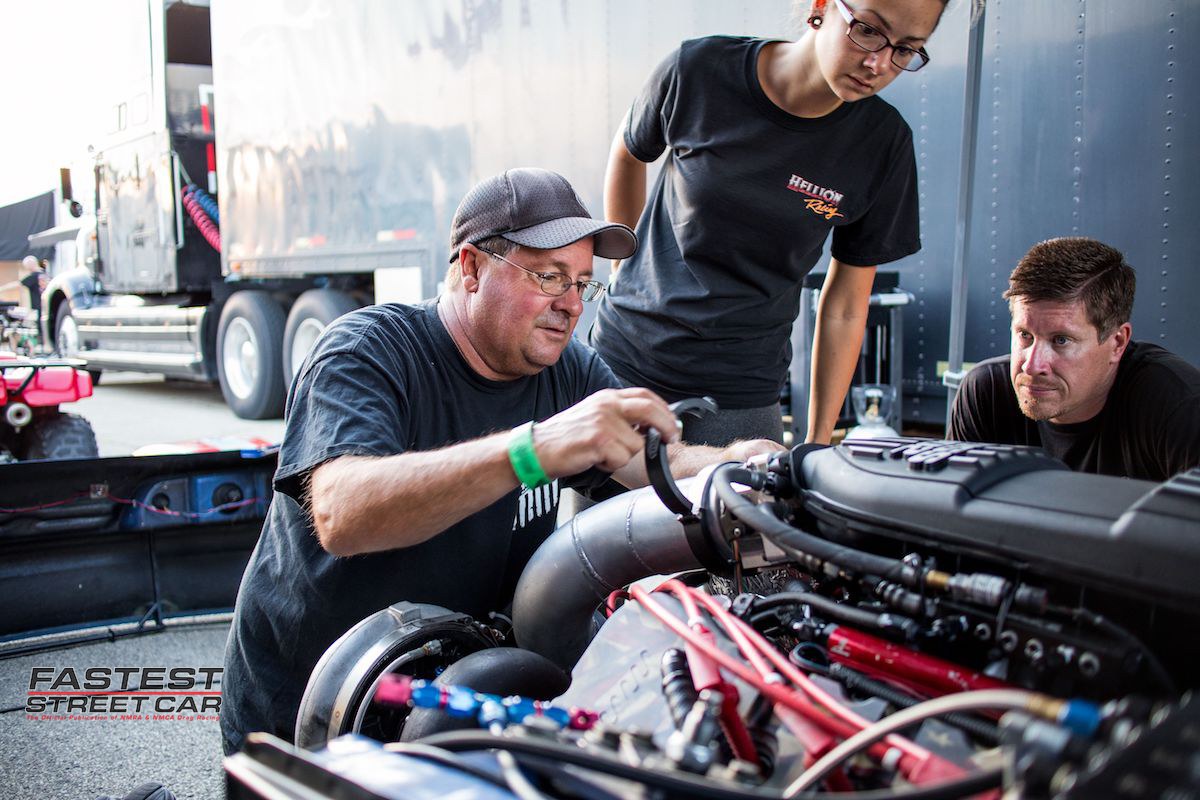 WHAT APPROACH DID YOU TAKE TO ACCOMPLISH WHAT YOU WANTED TO ACCOMPLISH WHEN YOU WERE COMPETING IN NMRA PRO OUTLAW 10.5 AND SUPER STREET OUTLAW We were there and we were in competition. If anyone took us lightly, we would beat them. We were constantly in a state of trying stuff to go faster. That's why people called me the Urist Racing Test Pilot. I didn't mind risking looking like a fool because if I believed that something would help us go faster, I wanted to try it, and we would end up going faster, even if it took a while. We had no place to test, so when we would show up to a race, we were testing and racing at the same time. That could be fun or frustrating, but if I didn't like it, I would have stopped. There were a number of things that we tried and accomplished, but one of the memorable moments was trying to run a 440 cubic-inch small block Ford with a ProCharger, a Liberty's five-speed transmission and a clutch. We tried twin disc and triple disc clutches, and we settled on a twin disc clutch and went 6.80-something and 200-something miles per hour. Jim Summers of ProCharger, who was already sick at the time, was giving me clutch weight settings. WHAT WAS YOUR TAKEAWAY FROM HALEY SPENDING SO MUCH TIME WITH YOU AT THE TRACK WHEN SHE WAS A CHILD Haley was an interesting kid. She enjoyed coming to the track when I was racing because of the freedom she was allowed, and because of all of the people she would meet and talk with, including the late Ricky Best. She would bond with all of the crew members, and lay under the cars with them while they were working on them. Then, she would come home and tell stories about it to other people. That told me that she enjoyed going to the track, and even though I didn't have a clue where that would go, I firmly believe that if you don't show kids opportunities early in their lives, they're going to grow up wandering around. 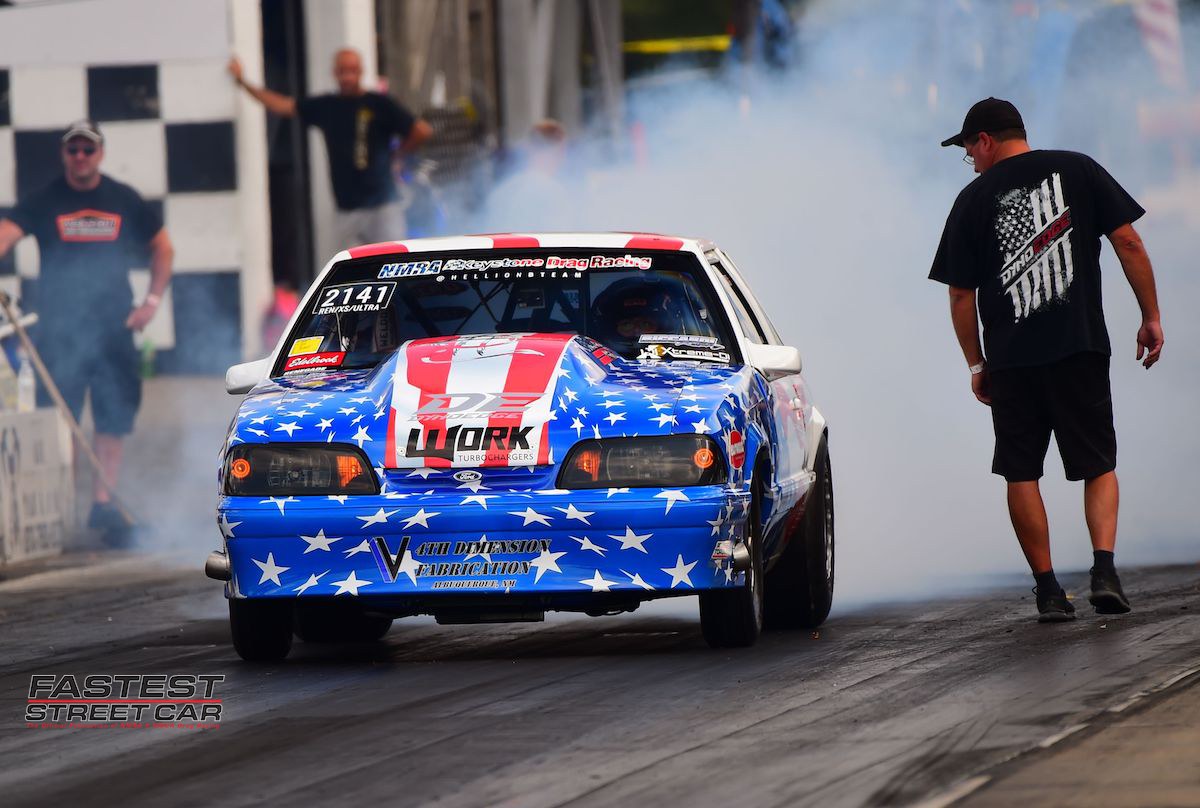 DO YOU THINK YOU INFLUENCED HER TO GO RACING She knew that in our house, she wasn't going to sit around and play Xbox all summer long. She sucked at sports, so I taught her how to mow where I work, and it wasn't just a little mower. It was a $100,000 mower, and she could definitely drive it, so I thought we should put her in a junior dragster. She had more fun testing in it than she did competing in it, so I sold that and sometime later, I put her in a street Mustang that Hellion had. It was a turbo deal, and she drove it her junior and senior years of high school, and her mom, my ex-wife, told me that if I could make her stop racing it on the street, she would support her going drag-racing at the track. So, I took Haley to Frank Hawley's Drag Racing School, and I wasn't sure what to expect, but I remember standing on the fence and watching her do a burnout, back up and launch like she had been doing it all along, and that's when I thought we had something to work with. HOW DID YOU PREPARE YOURSELF FOR RACING VERSUS HOW DID YOU PREPARE HALEY FOR RACING To prepare myself for racing, I reminded myself that everything is 90 percent mental. If you can lift something heavy, you have to tell yourself how to lift it in a way that won't hurt your back. Driving a race car is fairly simple in that you have to go from A to B and C to D, so I tried to prepare Haley for driving a car in the same way that I prepared for driving a car. I went to sleep thinking about my next pass, or what would happen if I caught on fire. You're responding to a mental reflex that your mind is already thinking about. She didn't get that until Frank Hawley told her the same thing. After going to Frank Hawley's Drag Racing School, we watched YouTube videos from when Frank Varela drove the car she was going to drive, and ultimately, when we showed up to her first NMRA race in Florida, she staged the car perfectly, launched it perfectly and the rest is history. I think once you have shown the propensity to drive and you have the mental process, that puts you in the right place at the right time. When all of this started, it was a father-daughter bonding thing, and I was okay with that, but it has turned into more. HALEY EARNED CHAMPIONSHIPS IN PROCHARGER COYOTE MODIFIED IN 2015 AND 2018 AND EDELBROCK RENEGADE IN 2019. HOW DOES THAT MAKE YOU FEEL AS HER FATHER AND A FELLOW RACER I have a lot of pride in all of that, but I have even more excitement for her because of all of the stuff that could happen for her next. Ever since I realized her skill in a car, I've been trying to show the world what they have in front of them. From her first pass to her first championship, it has been pure We're here, and we want to show you what we've got. 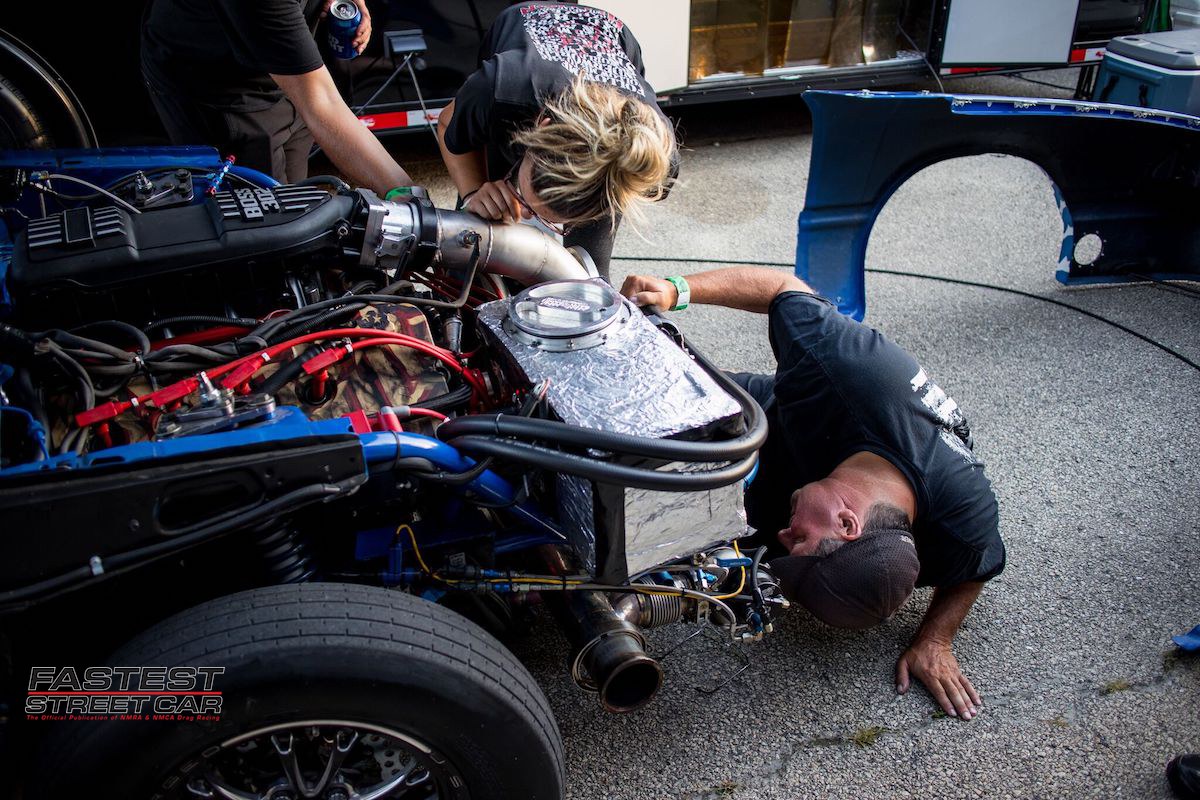 WHAT S IT LIKE TO BE BUILDING ENGINES WITH HALEY I taught Haley that building an engine is the same as driving in that you have a task at hand. You put your phone away and if we're measuring bearings, we're not going to look at our phone, because we're going to measure all of the bearings at one time. There's no room for stopping because there's no room for error with that kind of stuff. I've shown Haley the importance of properly gapping and measuring rings, and now she does it all. I have physically touched shortblocks she has put together because she's still young, but she definitely knows how to assemble her own stuff, and she has embraced welding, and wants to make a life of it. She's also fabricating. YOU MENTIONED EARLIER THAT YOU DON T HAVE TO WIN TO BE HAPPY WITH YOUR RACING PROGRAM. WHAT MAKES YOU HAPPY WHEN IT COMES TO YOUR RACING PROGRAM The point of racing is to compete and learn and have personal bests and personal pride in what you're doing. Winning is a secondary function of that. It's that little moment in time when you made everything work correctly. Maybe I'm weird, but I enjoy the process as much as the result, and sometimes the result is not a win. 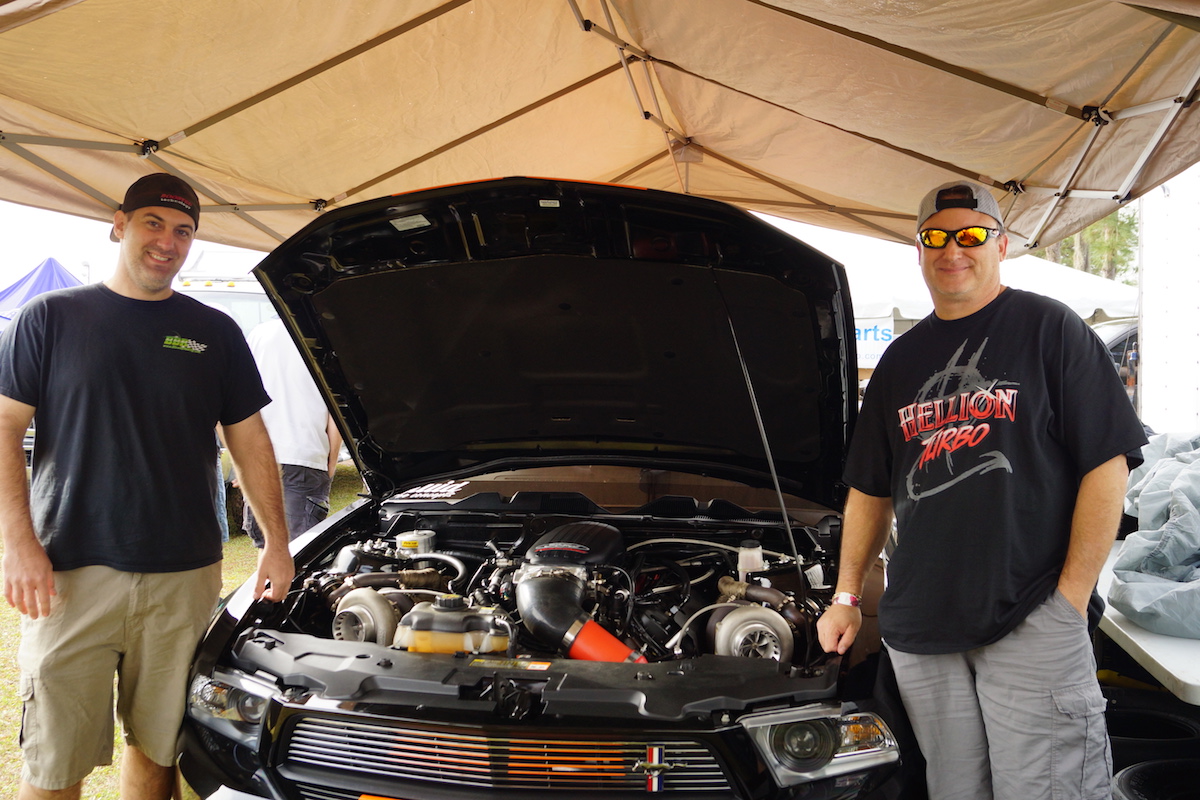 WHEN THE THROTTLE STUCK IN HALEY S MUSTANG AND CAUSED HER TO WRECK AT THE 21ST ANNUAL NITTO NMRA ALL-FORD WORLD FINALS LAST IN SEPTEMBER AT BEECH BEND RACEWAY IN KENTUCKY, MANY WERE WORRIED. HOW DID YOU HANDLE IT When the throttle stuck and the car started to make a move, my immediate concern was that Haley would get tangled with Bart Tobener, who was in the other lane, because that could have potentially made everything even worse. While you never want to see a fellow racer have trouble and have to lift, fortunately Bart did this time. He wasn't at full steam, and because of that, he and Haley didn't get tangled up. When the car stopped, I could see Joe Cram jump the wall and run to the back and then the middle of the car, and then, I didn't see any panic in him. All I could do was say to myself Please just get out of the car, Haley. I just needed to see her get out of the car. When she did, all was fine. I have stood on the starting line for a lot of wrecks, but not for my daughter's wreck. When I got down to her on the top end of the track, I could see in her eyes that she was okay. I could see that because she's my kid. The impact cracked her helmet, and her arm was deeply bruised, but she didn't have concussion and she wasn't more seriously hurt. WE WERE VERY RELIEVED THAT SHE WAS NOT SERIOUSLY INJURED. WILL YOU SHARE WHAT YOUR PLANS ARE NOW I gave the car to a local friend who does body shop stuff, and I bought another Mustang. We're moving on and up. We already have the engine in the car, the turbo is mounted and we have started wiring. We have always been focused on safety, and we had a safe car, and we'll focus on making this car just as safe. I learned from the fire I had in my car just how important that is. We plan to test in a few months. Hopefully all will work out and we'll be ready for the first NMRA race of the year as well as the first NMCA race of the year. While having a championship in NMRA Renegade is good, we are racing for a number, because that's how I've always done it. So, we're not finished in Renegade yet. (Interview from the February 2020 issue of Fastest Street Car) 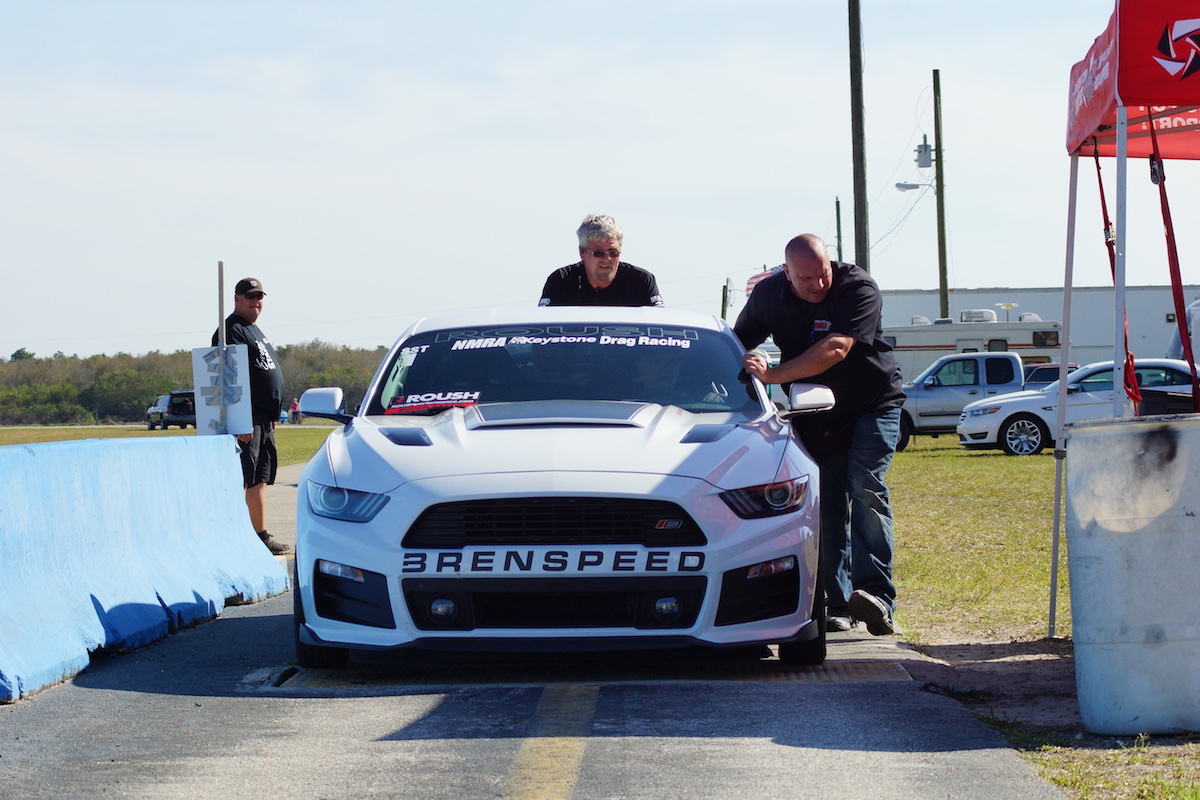