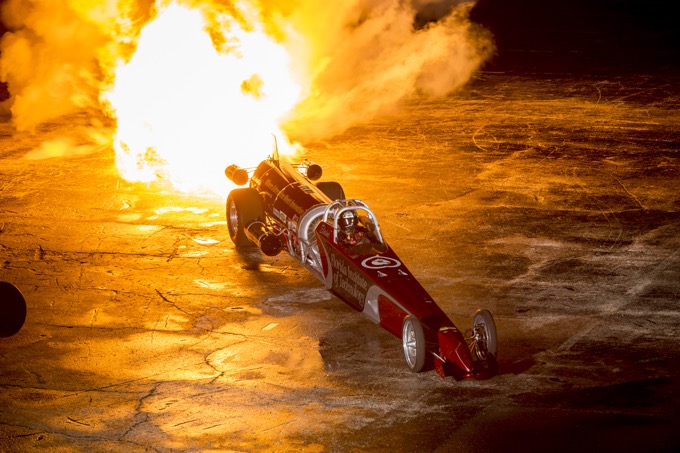 After a three, two, one countdown, Elaine Larsen's crew powers up the ignition on her dragster to invite the curious click, click, click followed by the boisterous boom that indicates that her General Electric J-85 jet engine has come to life. She then inches her Worthy Motorsports-built dragster to the starting line while making the engine's afterburner pop in raucous but rhythmic fashion before flying down track in her 5,000 horsepower machine. It happens so quickly that the 2014 and 2015 IHRA Jet Dragster world champion doesn't see any scenery from the 60-foot mark to the 330-mark, and before she knows it,'she's nearing 300 mph at the finish line. And while she can't feel the heat from the jet engine, she can definitely feel the vibration. Larsen, a longtime jet engine-powered dragster pilot, is known for firing up fans as readily as she fires up her dragster, and you can catch her in action at the 16th Annual NMRA Ford Motorsport Nationals presented by Juggernaut Power, April 28-May 1 at Maple Grove Raceway in Reading, Pennsylvania, the 5th Annual Chevrolet Performance Nationals, June 3-5, 2016 at Atlanta Dragway and the 13th Annual NMRA Ford Super Nationals, June 9-12 at National Trail Raceway in Hebron, Ohio. Her Florida Institute of Technology-sponsored dragster is maintained by faculty and students of the university located in Melborne, Florida, while overseen by her husband, Chris Larsen, whom she met as a teen selling cider, caramel apples and doughnuts at a cider mill in Michigan. The Florida Institute of Technology faculty and students are as interested in the science and math behind racing as we are at Larsen Motorsports, said Larsen, whose nineteen-year-old son, Andrew Larsen, was introduced to the sport as an infant and now works with Larsen Motorsports in Palm Bay, Florida. On race day, she's assisted by crew chief and Florida Institute of Technology student Paige Sanchez, and on-track, she's accompanied from the other lane by her fellow Larsen Motorsports jet-racing teammates Kat Moller, Allison West, Dawn Perdue, Shea Holbrook and Jake Elliott. They share a passion for entertaining fans as well as educating them on everything from the welds on their dragster chassis to what it takes to maintain them. And sometimes - just sometimes - they break into song and dance in their pit area, and invite fans to join in.