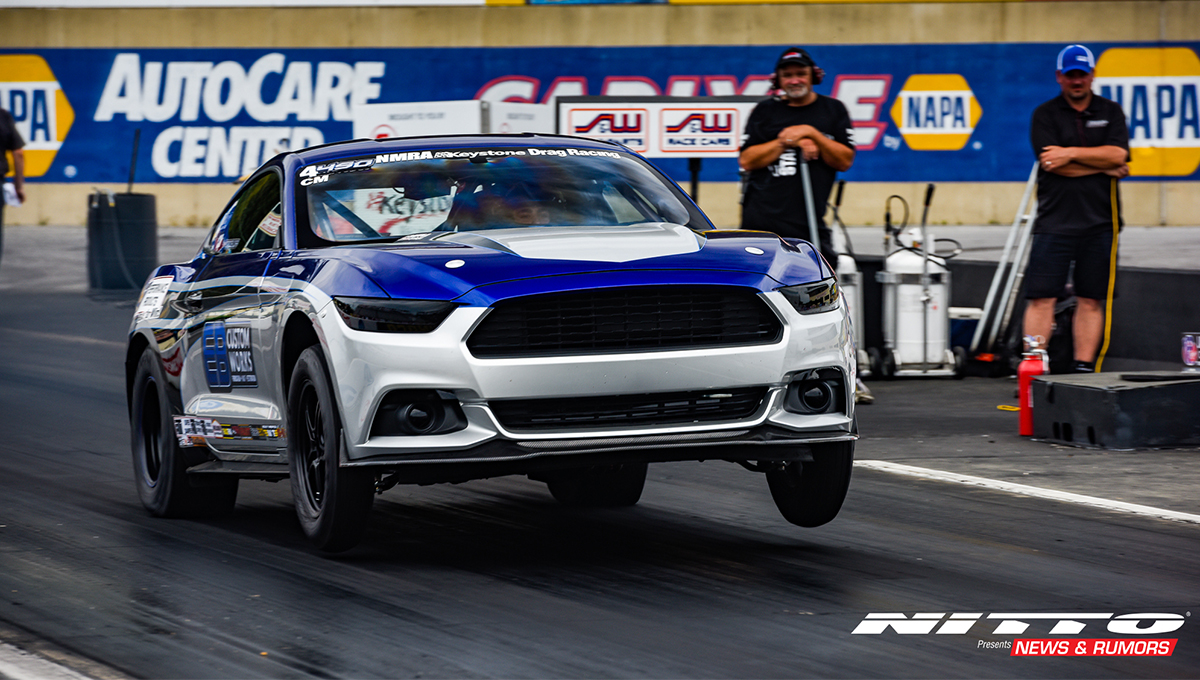 By Ainsley Jacobs Photos by Team NMRA After a lifetime following the NHRA circuit, Eric Bardekoff has found his calling in NMRA competition. He recently made the jump to NMRA ProCharger Coyote Modified and already has plans to step up his game even further. Based out of Commack, New York, Bardekoff runs his shop, EB Custom Works, during the day but focuses his attention on his racing endeavors whenever he can. My car was originally a 4-cylinder automatic EcoBoost with 1,200 miles, explained Bardekoff of how he acquired his 2015 Ford Mustang through Copart. The whole passenger side had been smashed, and the shock tower was pushed in by about four inches. Bardekoff enlisted the help of his friend at MVA Customs and the team worked to get the chassis squared up again. The damage was fairly extensive, and there was a specific part that simply wasn't available to purchase. Undeterred, Bardekoff put in a call to Jesse Kershaw, who at the time was work at Ford Performance. Kershaw was able to pull the necessary strings to overnight the unobtainium. Mike Delahanty at Ford also helped out a lot, and I'm really grateful for his support, added Bardekoff. Initially, Bardekoff opted to run a pushrod engine and a clutch set up for NHRA Factory Showdown, but soon found the was being priced out of the class as more and more big names started getting involved. He originally started in NMCA's Holley EFI Factory Super Cars, but the urge to do more was too hard to resist.Once again, Bardekoff gave himself an option move to NMRA instead.

Working with his father, Jeff Bardekoff, the guys got down to business. After talking with JC Beattie at ATI Performance Products, it was decided that a switch was needed. A Whipple-supercharged 5.0L Coyote engine was swapped in place of the pushrod powerhouse while a lightweight Turbo 400 automatic transmission was fitted alongside a billet two-piece converter. Controlling it all is a FAST XFI EFI system working in conjunction with an all-Weldon fuel system, and a host of Racepak componentry so Bardekoff can monitor everything known to man. The 7.50-certified cage, which Bardekoff fabricated himself, is complimented by a lightweight rear gear from Indy Gear and a Mark Williams bonded driveshaft. I built the whole live rear for it including the Ford 90-inch. It is a regular stamped housing that I braced and added a Cobra Jet-spec suspension, continued Bardekoff, who built his new pony platform from the ground up. Up front, the Mustang boats a stock suspension setup with a travel limiter kit to help keep the car from dragging its bumper. Bardekoff also took advantage of the equipment available to him at his shop and put the car on a rotisserie in order to spray the House of Kolor paint which is topped with a ceramic clear coat. In preparation to run ProCharger Coyote Modified at the upcoming 15th Annual NMRA Ford SuperNationals at National Trail Raceway in Hebron, Ohio, over the weekend of June 8-10, Bardekoff pulled about 150 pounds of excess weight from the car. I was about 250 pounds too heavy at the Maple Grove race this year, and I ran an 8.21, so now I think I should be able to get into the 8.0s, noted Bardekoff excitedly of how he plans to improve his personal best. After the event concludes, Bardekoff will begin work on his Cobra Jet-clone Mustang yet again. A new engine from Lawrence Racing Engines in Westhampton, New York, is ready and waiting to go. He'll keep his current 2.9L Whipple supercharger, NHRA-spec throttle body, and American Racing Headers-built manifolds, but the 9.5:1 compression 5.0L engine will then be topped with milled heads in order to bump up the compression slightly. Bardekoff can't wait to see how far he can push his new combination hopefully into the 7.70s or even 7.60s in the quarter-mile and is looking forward to the remainder of the NMRA season and beyond.
ATI Performance Products
,
EB Customs
,
Eric Bardekoff
,
ProCharger Coyote Modified