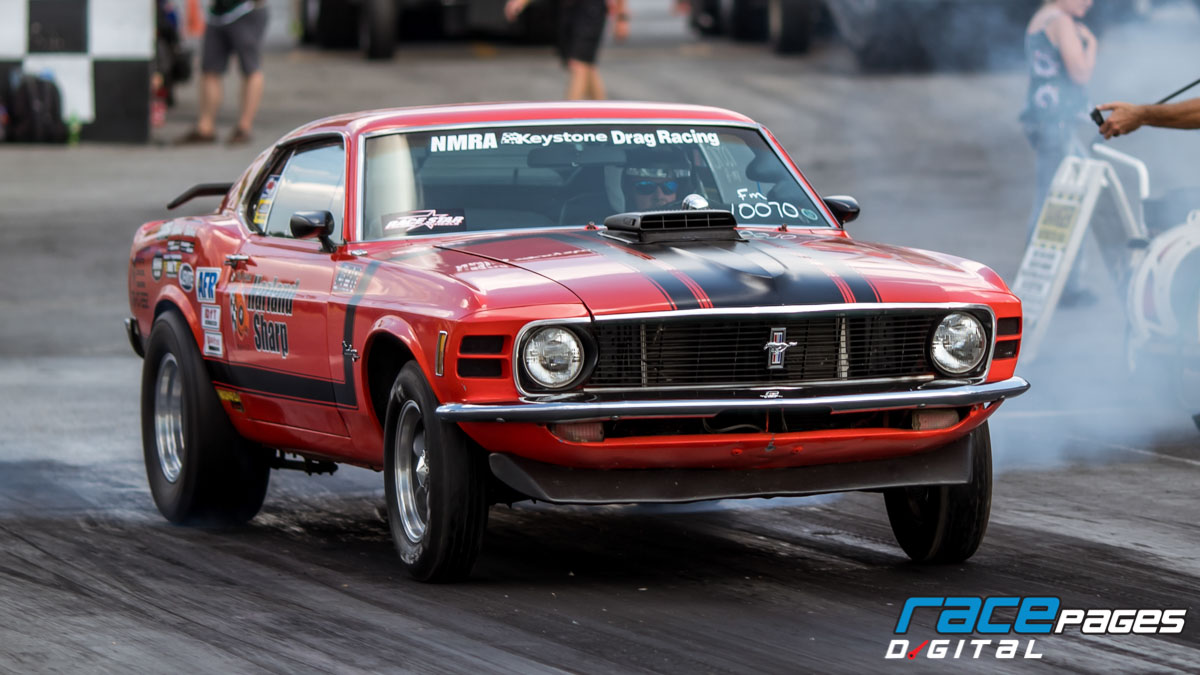 For some people, retirement is a time to relax and enjoy life at a slower pace. For others, like Danny Towe, it's a time to pick back up and move forward full speed ahead. Thanks to some not so subtle prodding from his friend and NMRA Exedy Racing Clutch Modular Muscle driver, Shane Williams, Towe started running in NMRA Race Star Wheels Ford Muscle back in 16. Shane gets me into more sh*t than anyone else, laughed Towe, who recalls the conversation that took place in December of 15 and inspired him to get going. He said it was the perfect class for me quarter mile, foot brake, index As fate would have it, Towe took home the season championship that very same year, despite missing the race at Atlanta Dragway in his home state of Georgia, with his orange fastback 70 Ford Mustang. Racing alongside Williams and David Mormann, it was a season he won't ever forget. After a fantastic start to his Ford Muscle career and a fourth place points finish in 2017, Towe had to take a hiatus. He had been 'double dipping with jobs working both at the United States Postal Service and operating his own one-man garage as well but a move to a new home meant it was time to close up shop. The business was where all the racing money came from, and, well, you don't take your house payment to go racing, he said of the decision to lay low for a bit, although he still attended a handful of races throughout 2018 and 2019. I haven't been completely gone; I've just been severely on the sidelines. Now, Towe is retiring and decided it was the perfect opportunity to make some noise again. It's time for me to come back. I won the first-ever Ford Muscle race in 16 at Bradenton and the first championship, recounted the champ of his accomplishments. Now that a few others have had their fun, I'm gonna come back and make it tougher on them! Towe will still be running his familiar Harland Sharp-backed Mustang, which he's owned since 94 and has raced since 97. Harland Sharp, the respected name in performance roller rocker arms, will be on board just as they've been for many years prior a relationship that first came to fruition thanks to Towe's wife, Suzanne. Back in 05, Suzanne won the Fun Ford Weekend Open Comp championship and it was a big deal because she was the first female to win a title in either of the two all-Ford racing series, FFW and NMRA, said Towe proudly of his wife of 31 years. She connected with Harland Sharp at the PRI Show that year, and we've had their name on our cars since 06. Not much will change for Towe's Cheap Bastard Racing Mustang, as he prides himself on a fairly simple setup that works wonders for his index class of choice. A 'street car with drag radials, the Mustang still has functional windshield wipers and blinkers, was wired by his friend Scotty Austin, and makes use of a 393 ci V8 engine built by Danny Towe himself. It's nothing special down low but has Edelbrock heads and an Edelbrock intake with a QuickFuel carb and runs on E85 fuel, he explained of the setup, which also utilizes a Powerglide transmission built by his buddy, Red. Towe installed most of Calvert Racing's products into the steel-bodied, stock suspension pony car as well. I've got Calvert's Split Mono-Leaf springs, bars, and Rancho rear shocks that sounds like they belong on a truck but that's what Calvert says you put on there, so I did, he said sarcastically of the products that have helped him hook consistently over the years. Mickey Thompson tires wrap around a beautiful set of iconic American Racing Torq Thrust D wheels, and the wheels feature a one-of-a-kind set of center caps that have been custom engraved with both Towe's name and Cheap Bastard Racing. Towe has no tuner who works with him and is mostly a one-man-band when it comes to his operation. I wash it, haul it, and race it, he joked, but TJ Reynolds at Atlanta Auto Diesel helps keep my old F250 on the road. And wash, haul, and race it he will Towe will be departing his home in Georgia on Thursday to make his way down to Florida's Bradenton Motorsports Park for the first stop of the 2020 NMRA drag racing season, the Nitto Tire NMRA Spring Break Shootout, after which he will continue on for the full schedule of his big Race Star Wheels Ford Muscle retirement comeback tour.
Boss 302 Mustang
,
Danny Towe
,
Ford Muscle
,
Harland Sharp