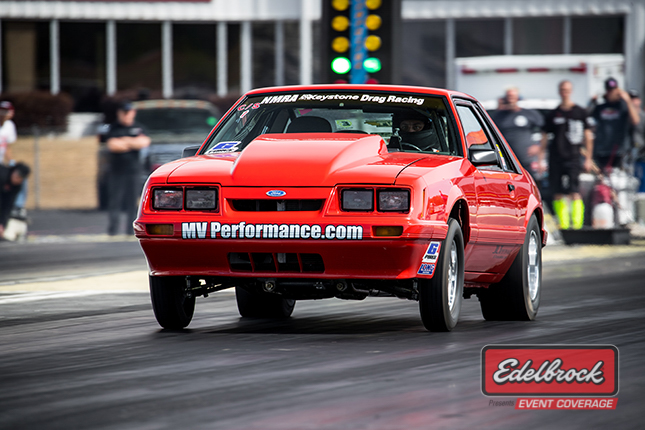 Qualifying begins today here at the 10th Annual NMRA/NMCA All-Star Nationals presented by MAHLE Motorsport. The NMRA/NMCA tech staff checks the roll out prior to qualifying at every venue it visits to make sure that the playing field is even and that the timing equipment is accurate.

If you weren't at the track yesterday, you missed the Race Parts Solutions racer appreciation party where free pizza, wings and beverages were offered, and the bench racing was fierce.

After Justin Jordan threw down with an 8.60 pass behind the wheel of Larry Starost's new S550 Mustang in Steeda Limited Street at the NMRA season opener in Florida, the car was quickly awarded a 150-pound ballast boost. Although Jordan got a big ol number out of the car, it came at a price fuel system issues meant a hurt engine and melted pistons and ensured a lot of hustle to get back in fighting shape for this weekend's 10th Annual NMRA/NMCA All Star Nationals presented by MAHLE Motorsport. Fortunately, MPR Racing Engines stepped in to help refresh the engine, and Jordan redid all the wiring and Fore Innovations fuel system himself at his shop, Jordan Performance and Racing, to eradicate the previous errors. An AEM Infinity engine management system was installed in place of the factory computer, and now, Starost will be behind the wheel of the 3,295-pound car and the pair is looking to reclaim the class ET and MPH records. Just as his car is new, Starost himself is new to driving a quick, turbocharged car with a Powerglide, trans brake and a bump box his previous foot brake ride only ran in the 10.60s.

New kid on the block, Chad Stephens, of Hamilton, Ontario, Canada, has got a pretty red thing hanging out in his pit. His car, an 87 Ford Thunderbird backed by his company, Pipeline Repair Services, is definitely something different and is turning a lot of heads not just in NMRA G-Force Racing Coyote Stock. Stephens, along with his father, Greg Stephens, picked up the car 12 years ago to build 'something, but life, family, and business got in the way. After watching from the sidelines for years, fellow Coyote Stock racer Walter Baranowski III was able to talk Stephens into starting up again, and now he'll be putting his first-ever pass on the car during today's qualifying. Equipped with a GEN2 Coyote engine, Black Magic clutch and G-Force 101-A transmission, RPM Transmission also helped with many pieces for the build along with Vibrant Performance and Performance Cellar. Additional help and support can be credited to Steve Toth and Chris Joeli, as well as Coyote Stock wheelman Andy Johnson who had been invaluable with advice and information.

Why is 9-time world champion John Urist smiling Because after lots of hard work and late nights, he and his Hellion Turbo team are finally progressing in the right direction with his Turn 14-backed S550 forward. The guys have been busy focusing on the drivetrain of the MMR-powered car and have found a few small things that added up to a big boost in performance and a new personal best for it of 4.37 at 167 mph during yesterday's NMRA VP Racing Fuels Street Outlaw test session.

Mark Wells son, Cash Wells, is on site with the team's mascot. A 5-year-old white-headed Capuchin monkey named Buddy Love even has his own Simpson racing suit and has been having fun sneaking dollar bills in the pits.

Saul Walker II had a less than ideal ARP Open Comp first qualifying hit, but he kept his usual smile on his face and worked through the issue with his 1993 Ford Mustang, which just turned out to be that the floats on his carb were set too high.

There was a meeting of the minds between NMRA VP Racing Fuels Street Outlaw driver Andrew DeMarco and PTP Racing's Patrick Barnhill as the two discussed what changes to make to DeMarco's recently-refreshed and Vortech-supercharged White Girl Wasted 86 Mustang or perhaps they were just arguing over what to order for lunch.

Qualifying is underway. Get the results as they come in right <<<<HERE>>>>