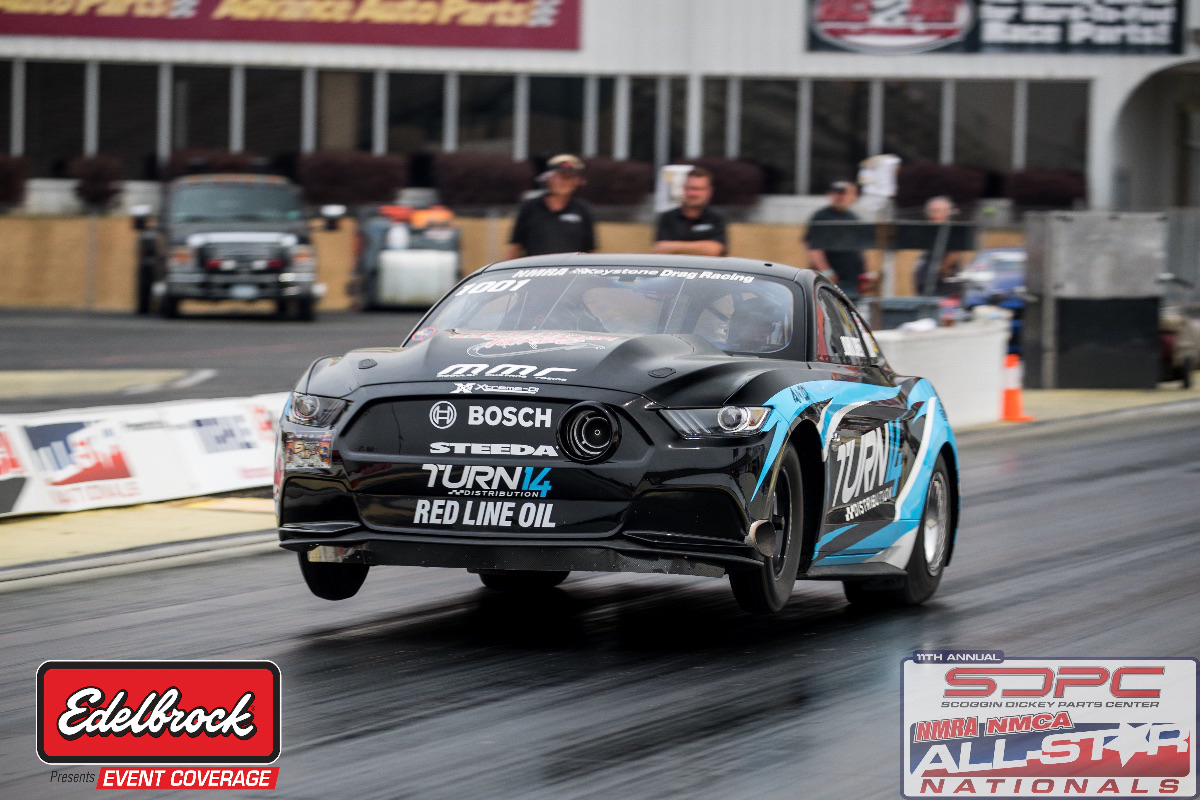 With the rain overnight, the Total Venue Concepts crew is hard at work drying the Atlanta Dragway surface in preparation for today's first round of qualifying at the 11th Annual Scoggin-Dickey Parts Center NMRA/NMCA All-Star Nationals Presented by MAHLE Motorsport. Yesterday was an action-packed day of test n tune runs and more racers were stacked up and ready to claim their pit spots as the action gets underway this afternoon around 2 p.m. Stay tuned throughout the day for updates as racers vie to earn a coveted spot in the Aerospace Components Winner's Circle. 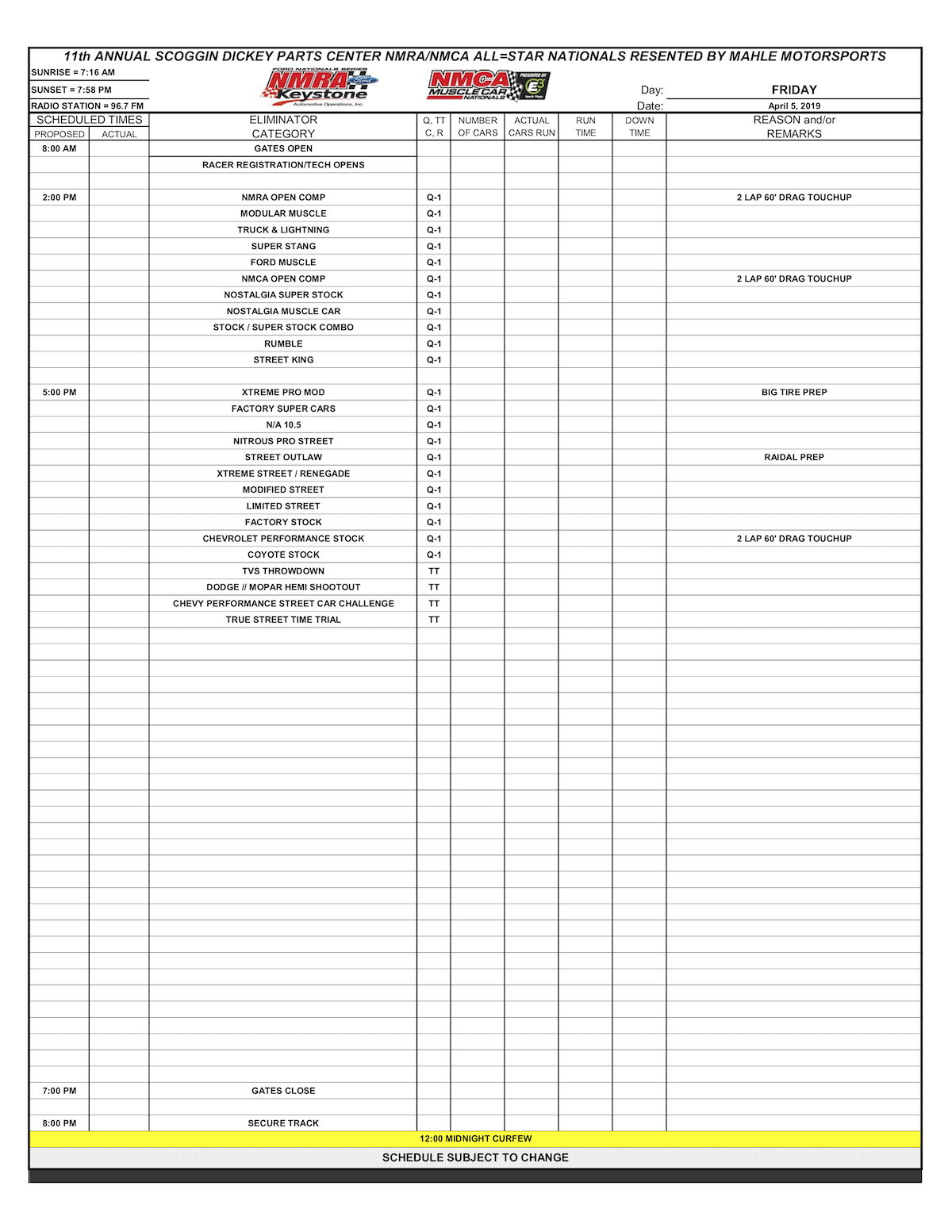 Racing officials have announced a target start time of 2 p.m. today as track drying and racing preparations are underway after an overnight/early morning rainstorm. There will only be one round of qualifying today due to the weather conditions, with the index categories in both series kicking things off. Heads-up classes are scheduled to follow later in the day at 5 p.m. 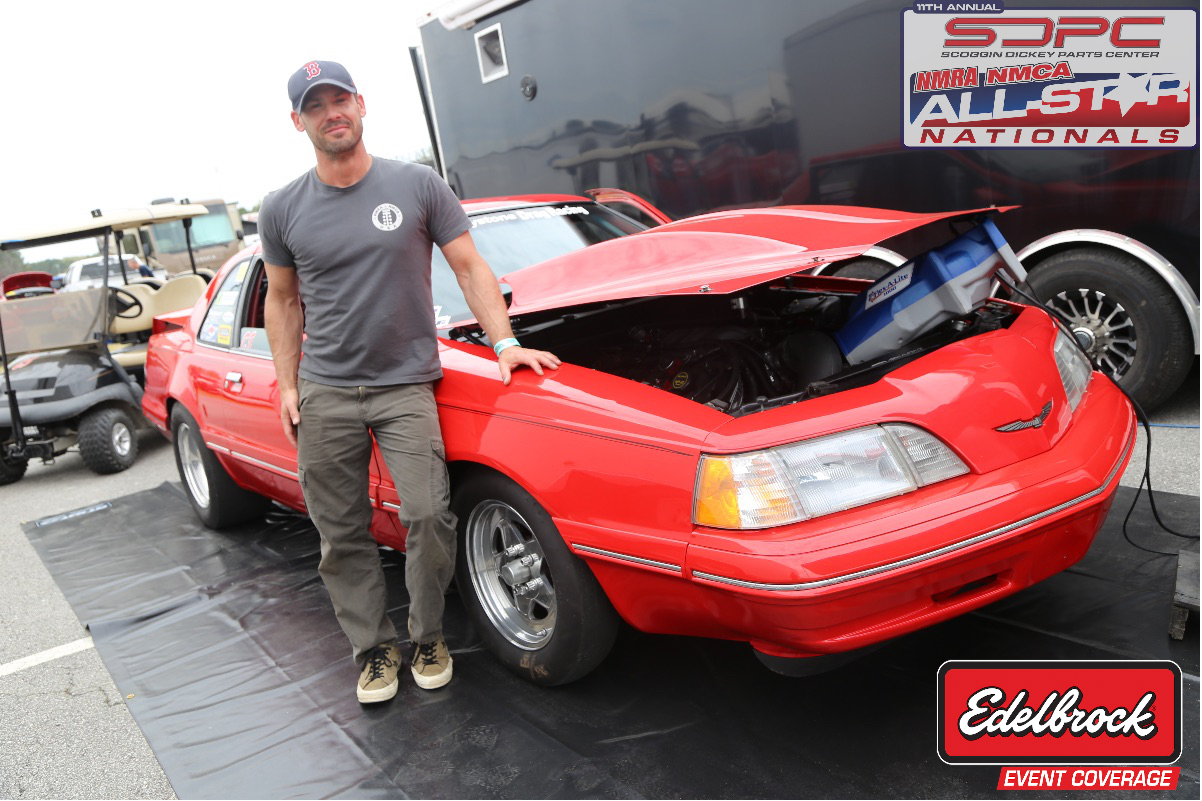 A rare bird, if you will, running at the 11th Annual Scoggin-Dickey Parts Center NMRA/NMCA All-Star Nationals Presented by MAHLE Motorsport is Chad Stephens Fox Thunderbird, which he is campaigning in the NMRA G-Force Racing Transmissions Coyote Stock class. Stephens is a longtime Fox Mustang owner who just wanted to race something different. He is sneaking up on the combo, but says the family atmosphere at the NMRA races particularly in Coyote Stock is what keeps him driving down from Canada. While he wants to remain friendly with the competition, he says I want everyone to hate the car but not me. We'll see if he gets closer to that goal this weekend. 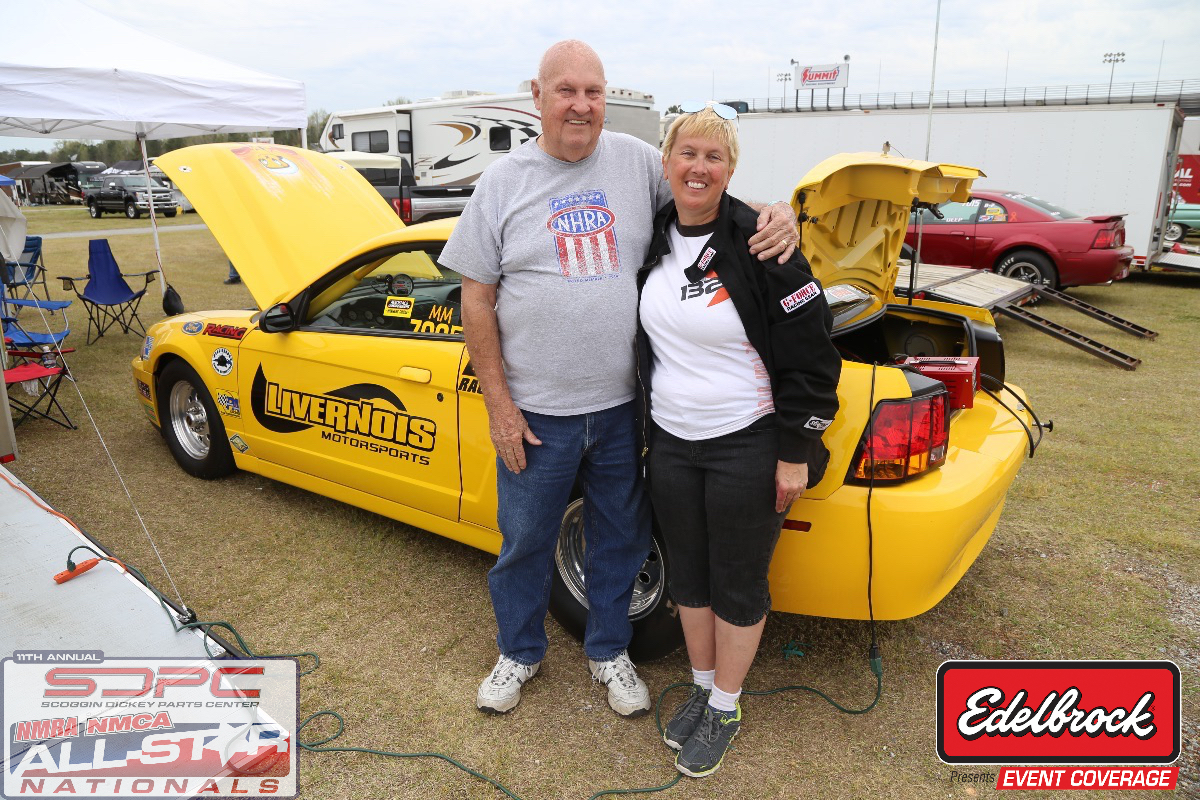 Longtime racers Barry and Roxanne Shepard are on the property running her New Edge racer, Tweety, in the Exedy Racing Clutch Modular Muscle class. Barry acts as the crew chief and Roxanne does the driving, as they pared down to a more manageable one-race car operation. The most important thing is they are still out enjoying the sport. 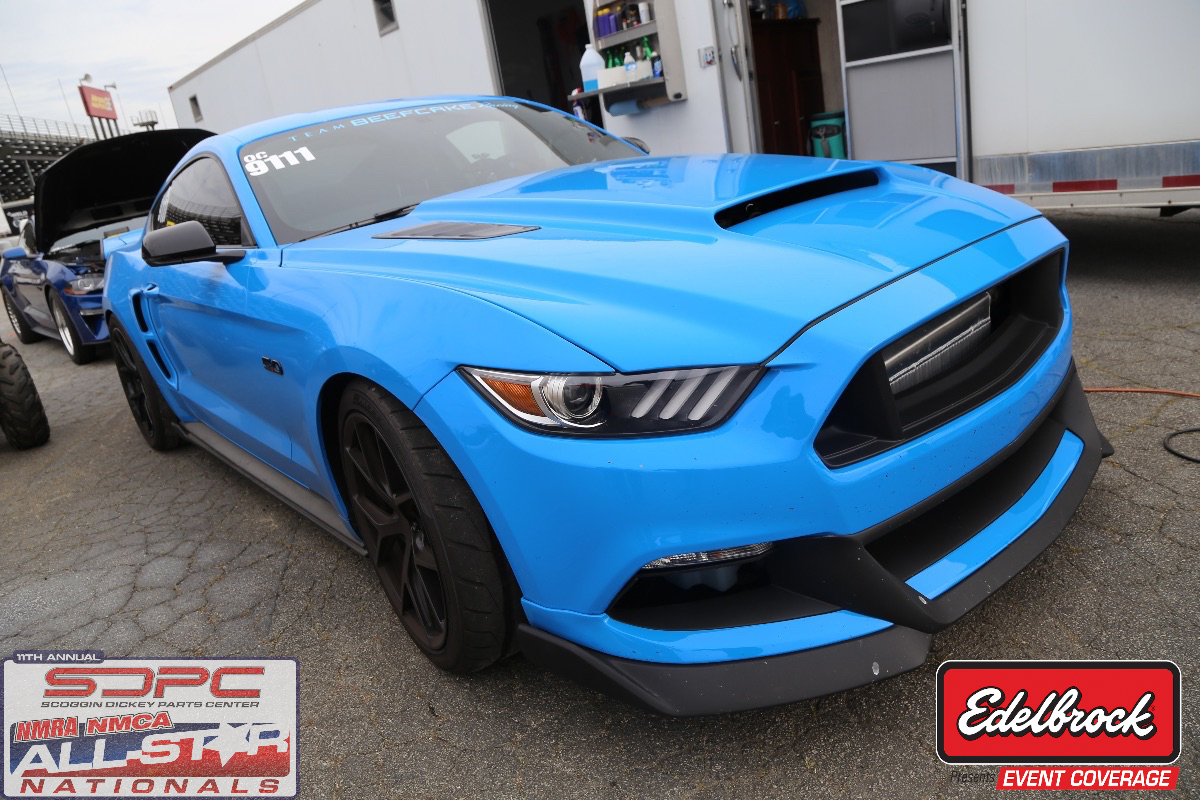 Terry Beefcake Reeves is racing two cars this weekend. One is his own Vortech-boosted 2018 Mustang GT, which is running without a wrap now to show it is a street car. The other is this boosted and bagged ARP Open Comp street machine that he hopes to put in the eights thanks to four-digit output bolstered by a Hellion Sleeper twin-turbo system. 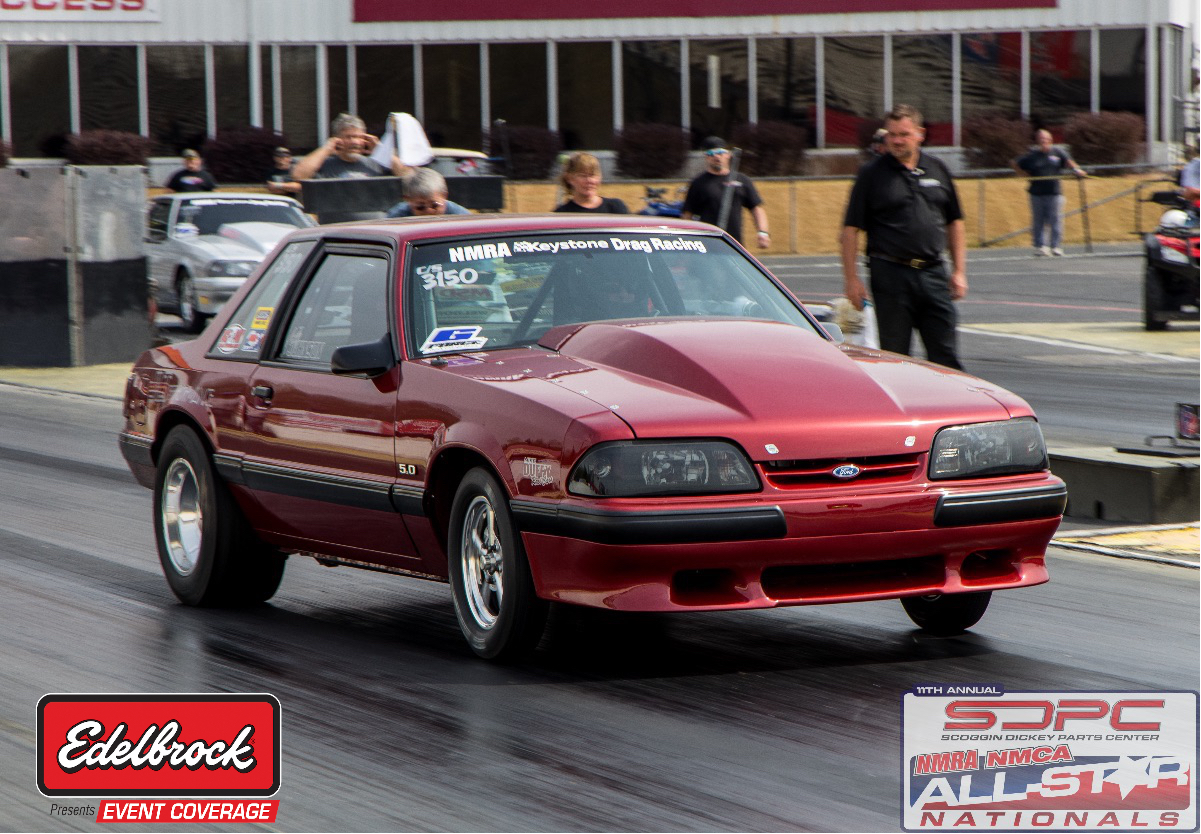 G-Force Racing Transmissions Coyote Stock racer Andy Johnson kept long hours on Friday night as his crew removed his G101 transmission to replace the sliders which were damaged in testing. The team got the trans back in and is hoping for better luck in qualifying today.

With a new Gen II Coyote engine under the hood of his Mustang, G-Force Racing Transmissions Coyote Stock driver Clair Stewart ran to a best of 10.18 on his way to a runner-up finish at the NMRA season-opener last month at Bradenton Motorsports Park in Florida, and during a test pass yesterday here at Atlanta Dragway, he rowed the gears of his G-Force G101A four-speed transmission to an even quicker 10.09. That elapsed-time is under the record-setting 10.17 Darin Hendricks ran at the NMRA season-opener. "That will be the new national record by .08 if we run it today," said Stewart. "Atlanta is treating us well." 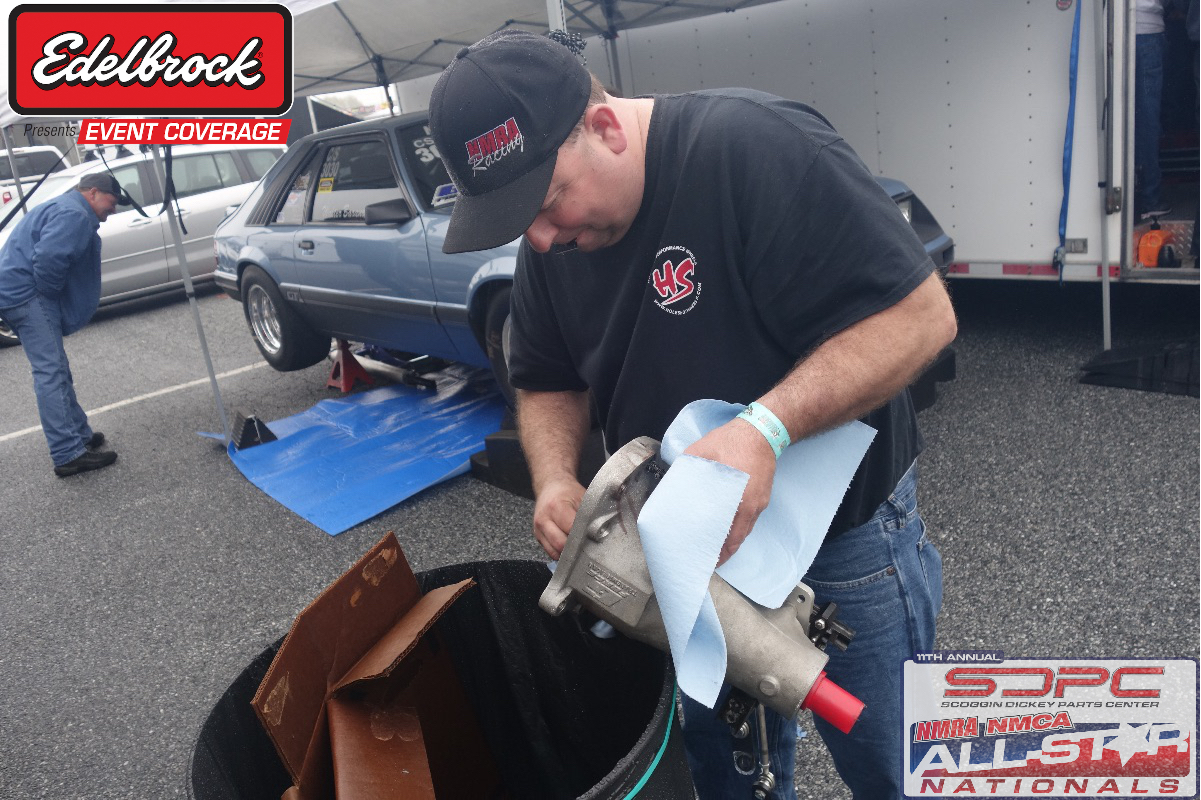 A crowd of Coyote Stock regulars were socializing in his pit as Walter Baranowski III's team used the weather downtime to do a little maintenance on the transmission in his G-Force Racing Transmissions Coyote Stock racer.

NMRA Edelbrock Renegade driver Valerie Clements is taking time off from planning her wedding to fellow racer George Farkouh to come racing this weekend. Yesterday, she hurt her 91mm ProCharger blower and had to swap to a larger 94mm unit today which also came with a weight penalty for the 05 Mustang.

2016 NMRA Driver of the Year and two-time champion Chris Parisi's Mustang is always as clean as a show car, and he used the down time while the track was drying to polish up his wheels. He also recently added a Steeda grill delete kit to help the NMRA QA1 True Street ride with air flow as his cold air intake had been blocked a bit by the former grill.

Noticing he was down on power just a touch prompted the always-smiling Saul Walker II to convert his NMRA ARP Open Comp carbureted 93 Mustang over to run on methanol, and he's eager to get out on track to see a difference.

A little bit of maintenance and a new set of spark plugs was a family affair in Maryland-based racer Gary Windsor's pit, as he and his son, Gary, 9, were supervised by his father, Gary. The middle Gary is eager to get out there and make some laps with his NMRA Richmond Gear Factory Stock 90 Mustang as he recently had Proformance Racing Transmissions freshen up his gearbox and installed it just this past Monday. 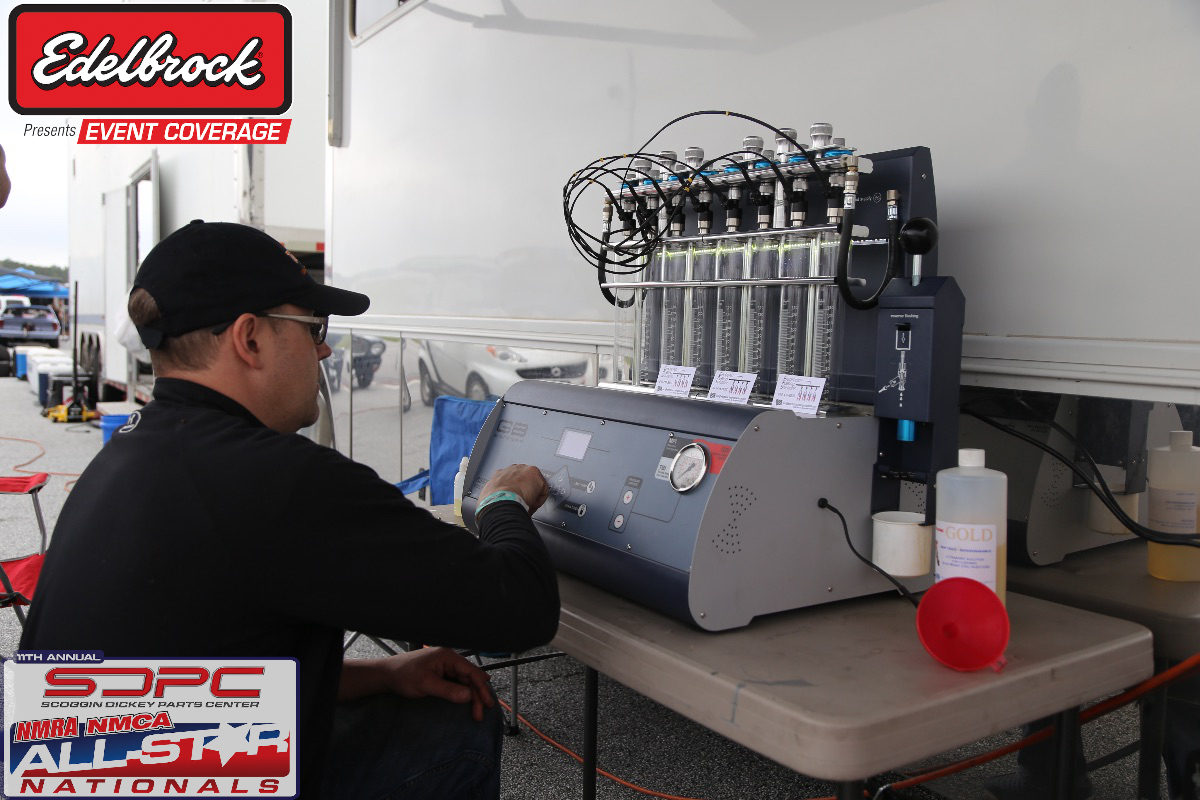 It's not everyday that you see an injector flow test stand in someone's pit, but ProCharger Modified Street Racer Kurt Welfel has a new company called Electronic Fueling Solutions, which offers cleaning, flow balancing, and repair of fuel injectors up to 550 lb/hr. It is his first time at the track with the equipment, so he is running a special for the weekend for those in need of optimized injectors.

Brad Schehr is looking to back up his win at the NMRA season opener in Bradenton this weekend. He went into the first race of the season unsure of his small-book Ford power plant's durability, but found his way to the Aerospace Components Winner's Circle. With a good handle on the tuneup, Schehr is looking good for another win in ProCharger Modified Street.   For qualifying results, Click HERE
All-Star Nationals
,
Commerce
,
Drag Racing
,
Friday
,
Georgia
,
MAHLE
,
NMCA
,
nmra
,
Qualifying
,
Scoggin-Dickey