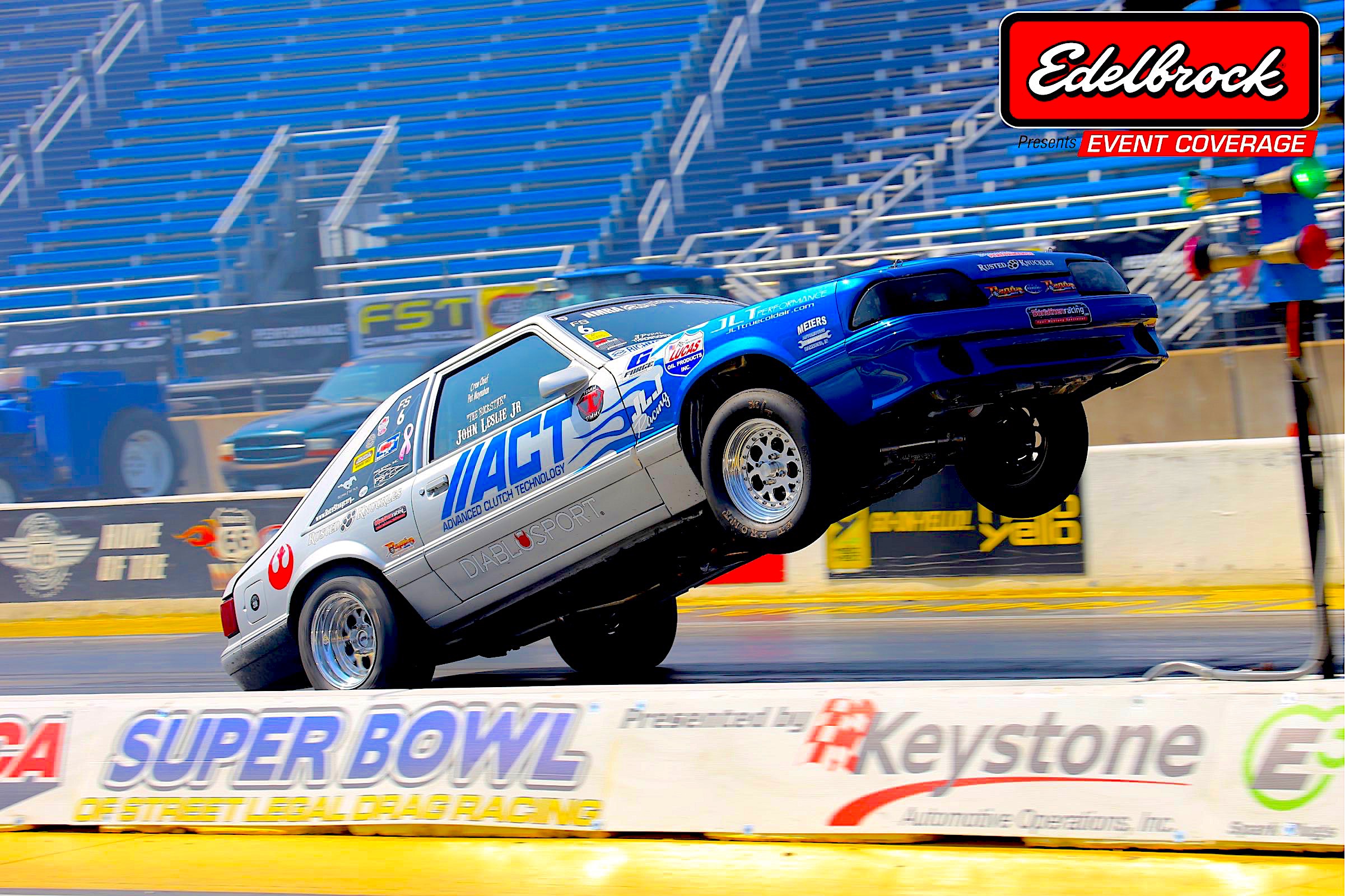 Today the 14th Annual Nitto Tire NMRA/NMCA Super Bowl of Street-Legal Drag Racing Presented by FST Carburetors kicks it up a notch as racers lock and load for the first round of qualifying. Competitors will begin to see just how their cars stack up against the competition as they jockey for position on the ladder. With the eventual goal of heading to the Aerospace Components Winner's Circle, racers will be experimenting in this early round to see just how quickly they can run this weekend to bring home the hardware. You can keep up with all the action here and live over on SpeedVideo.com. 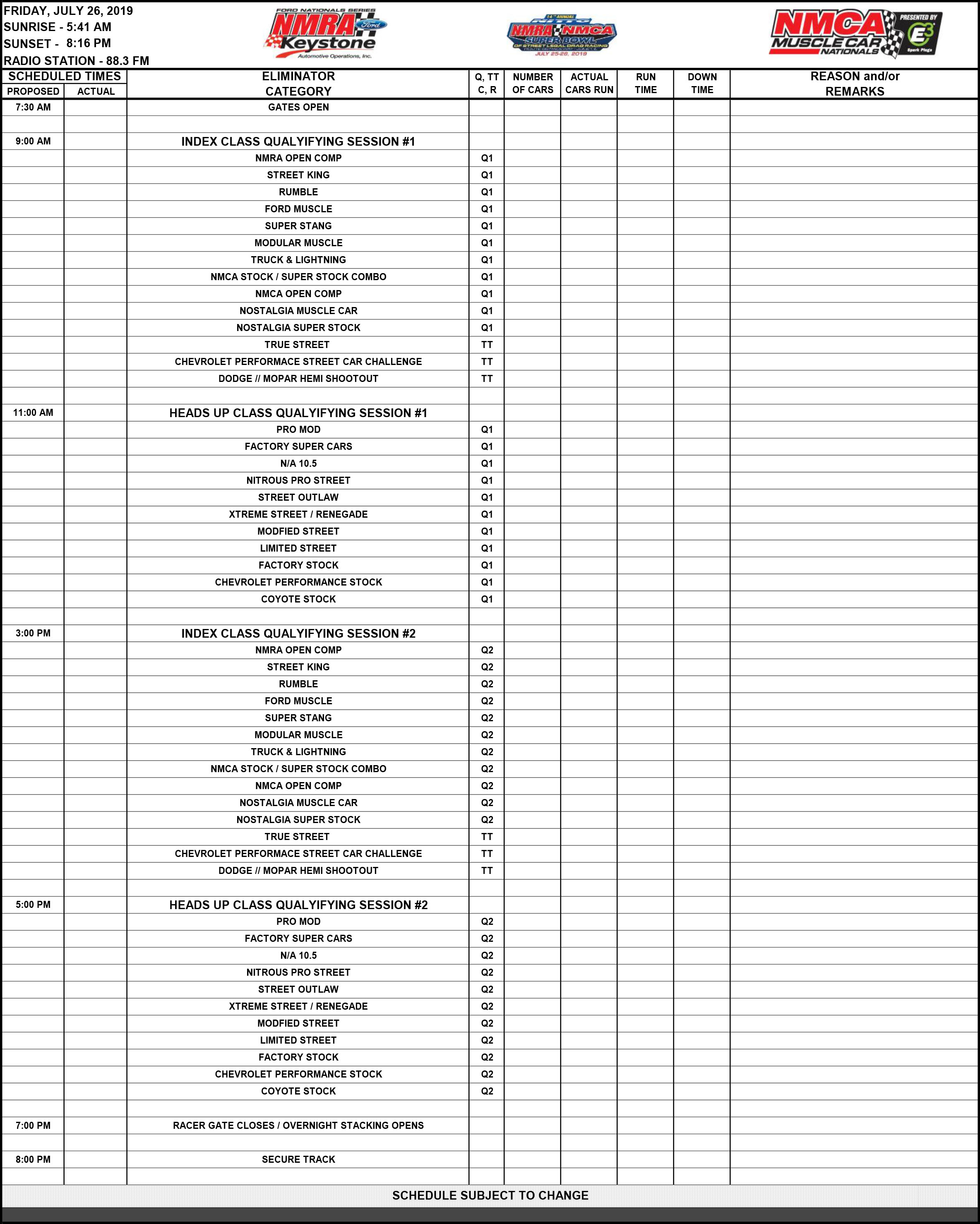 Here's a look at how the the action will unfold today, as qualifying gets underway at Route 66 Raceway in Joliet, Illinois. 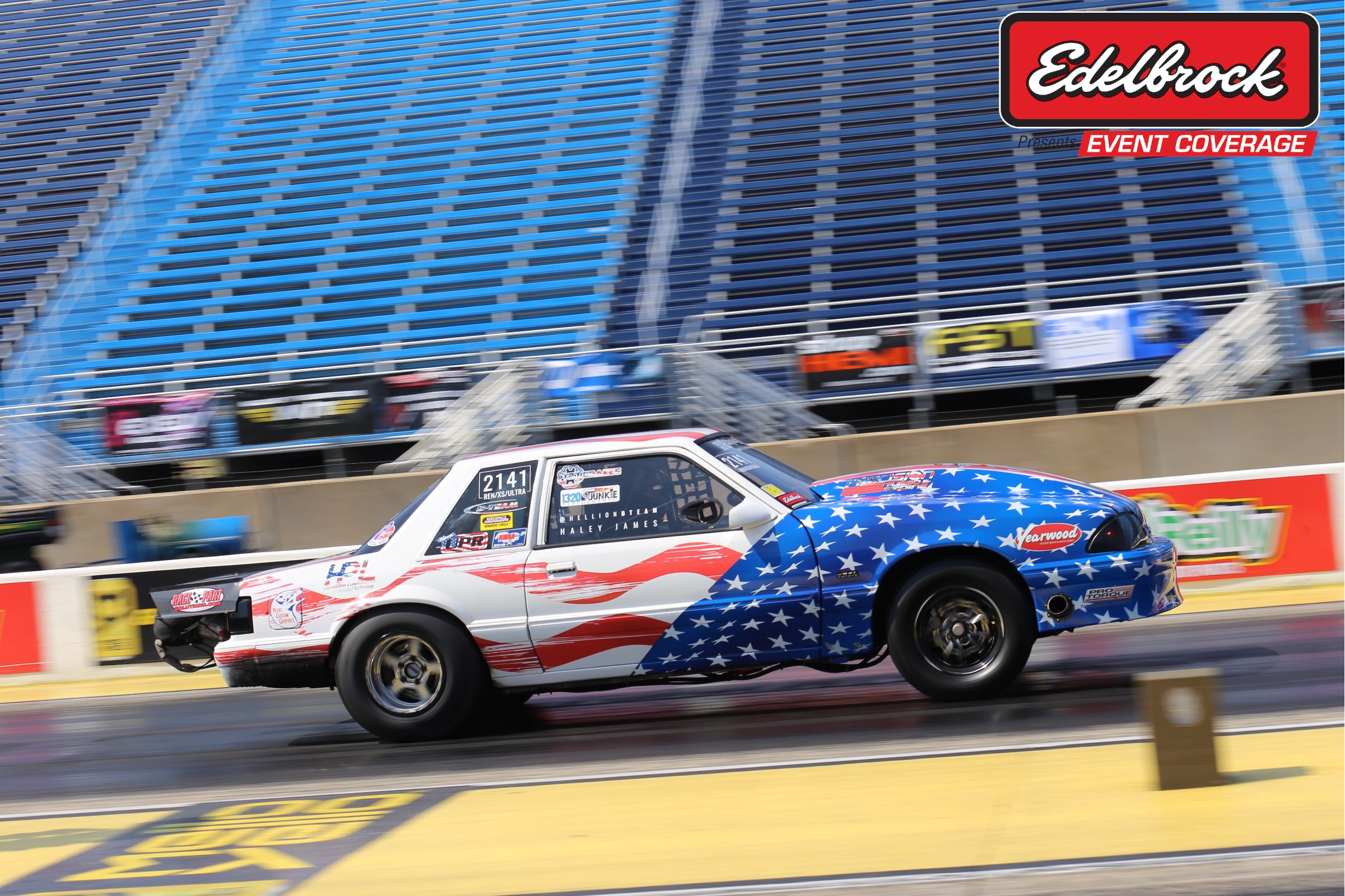 After breaking a timing chain at the last race, Edelbrock Renegade competitor Haley James was back in business at Route 66. With Riccardi Racing facilitating a new set of heads ported by Dave Jack, crew chief Dwayne James upgraded the combo with dual roller chains, a new Jason Teixeira-ported intake, and the aforementioned heads. The new combo is definitely more efficient, and the Hellion B-Team is hoping it will shine in the first round of qualifying. 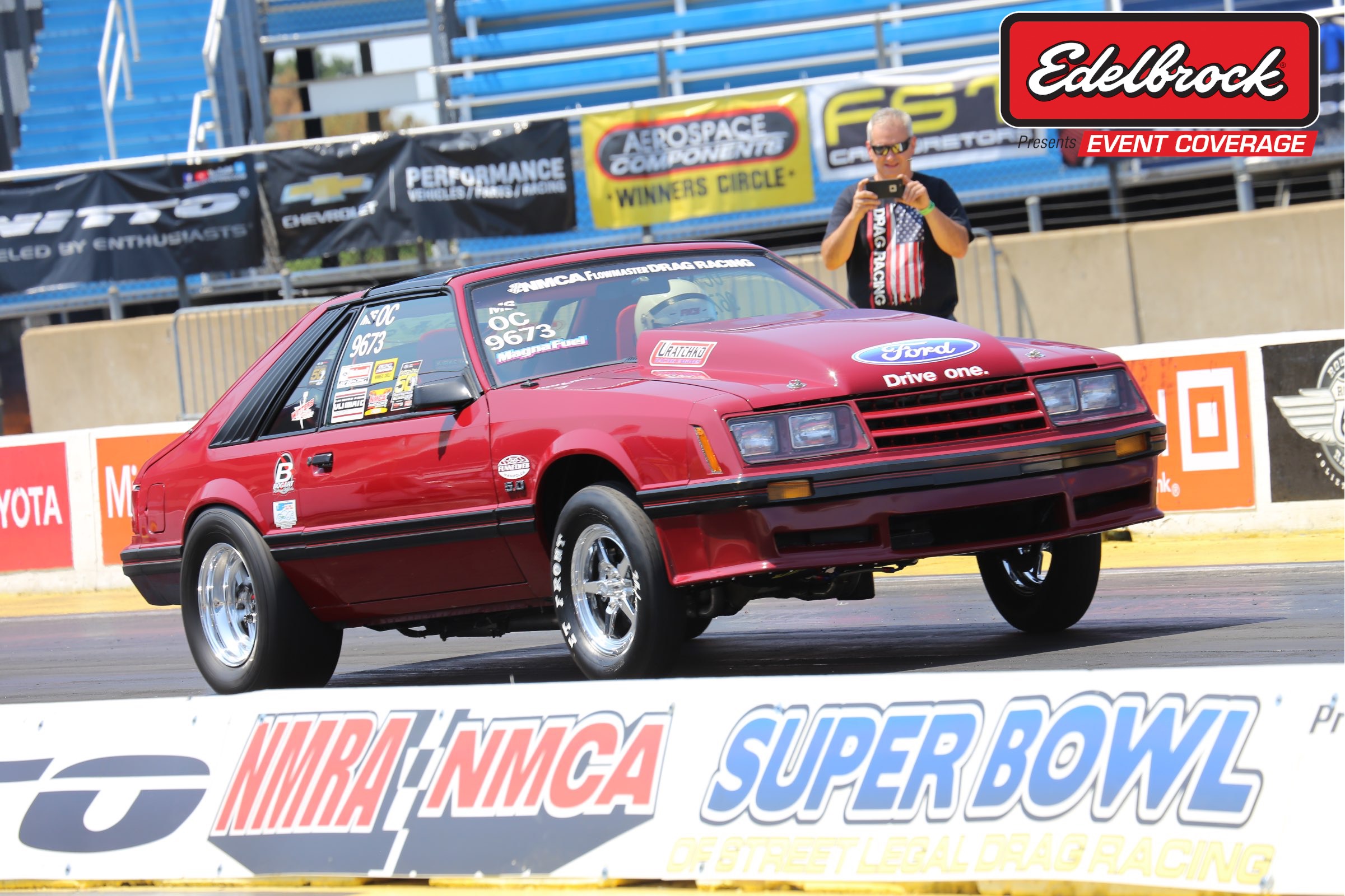 If you love Fox Mustangs, you have to have a soft spot for the 1982 Mustang GT. Mike Winters is the original owner of this 11,254-mile T-top car, which he converted into a drag machine back in 2005. The 64-year-old runs low 10s in ARP Open Comp in the car thanks to a built 347 stroker. 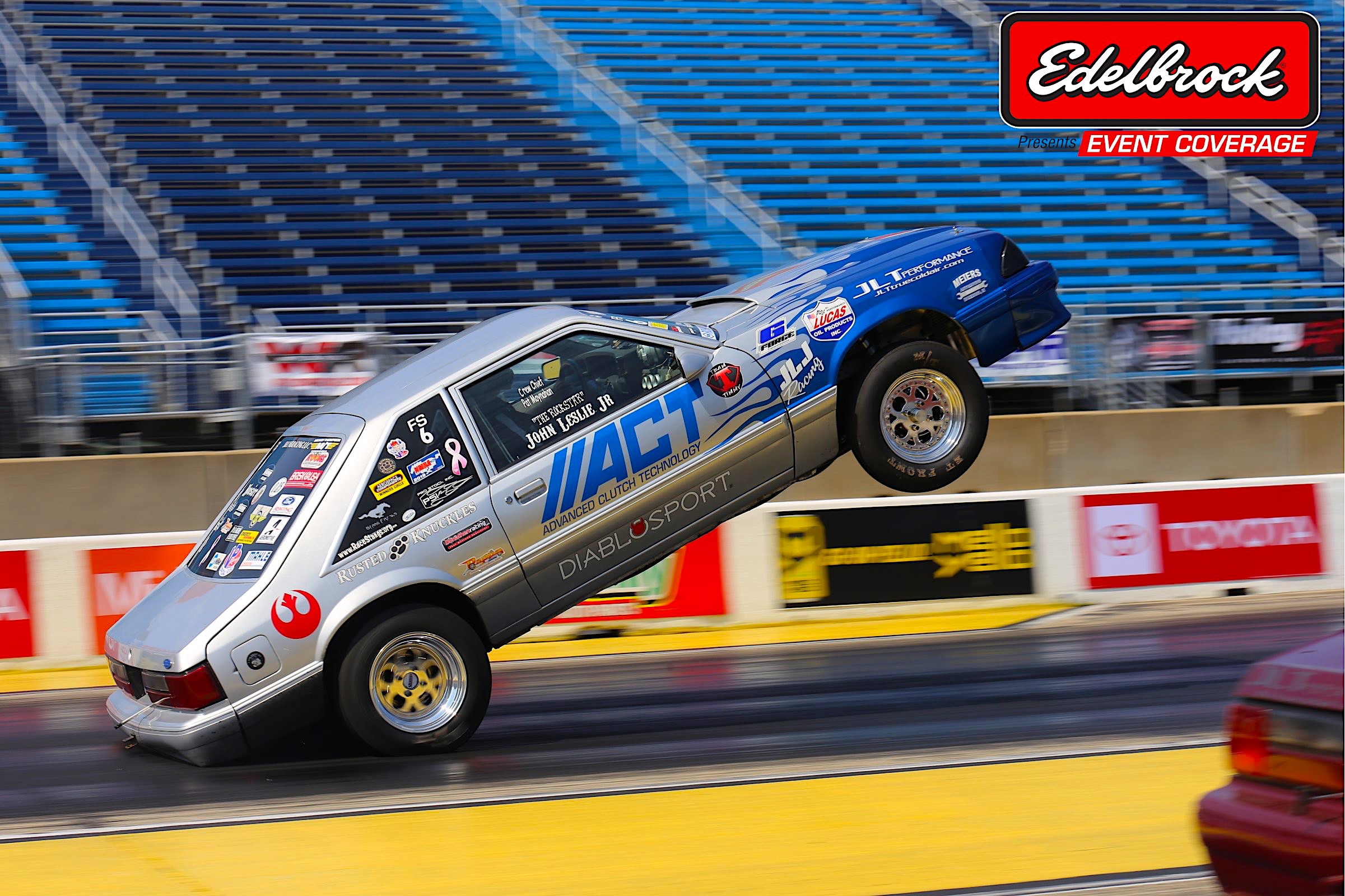 A racer who thought he had things figured out until testing yesterday was Richmond Gear Factory Stock racer John Leslie Jr. After his big wheelie met the wall in Commerce, Georgia, he assured us the car's days of sky-high wheelstands were over. Well, he ended up rowing through four gears on the back tires yesterday, so he hopes to get it reined in during qualifying.

Multi-time NMRA champion John Urist was performing an engine swap on Friday evening as it was time to drop in a fresh bullet. His Coyote engine has been consistently raced since the middle of last year, so he had a fresh power plant ready to go in for this event.

A Thursday tradition is the Nitto Tire Racer Appreciation Party held in the pits from 5-7pm. The cold beverages flowed as did the bench racing. 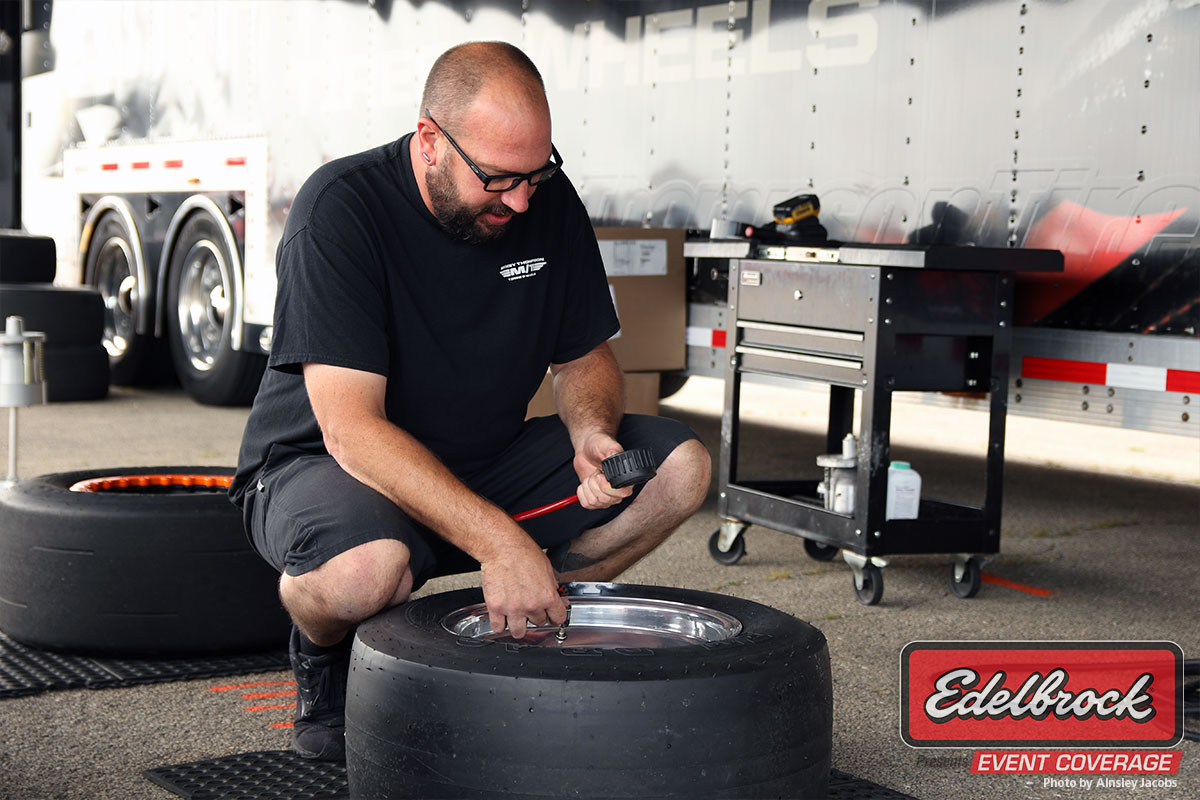 Thanks to the team at Mickey Thompson for being on-site here at Route 66 Raceway to provide expert service and tire tech for all our NMRA racers. 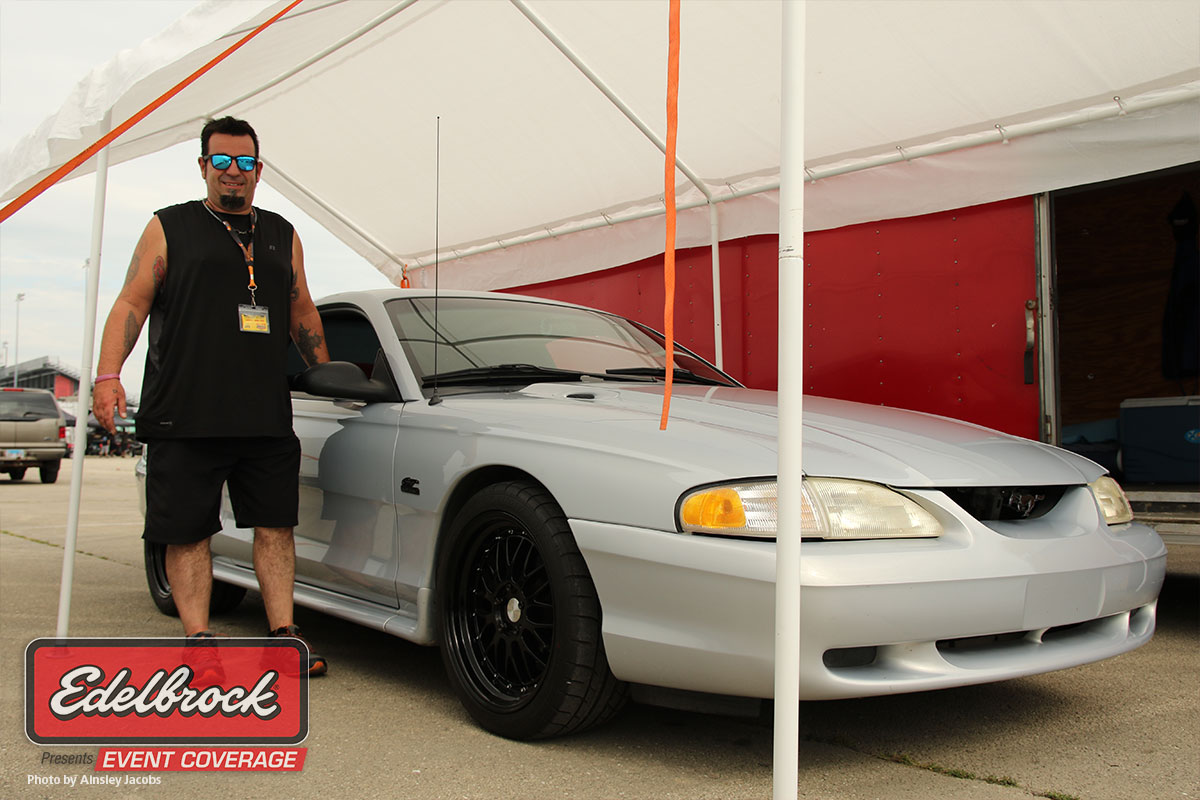 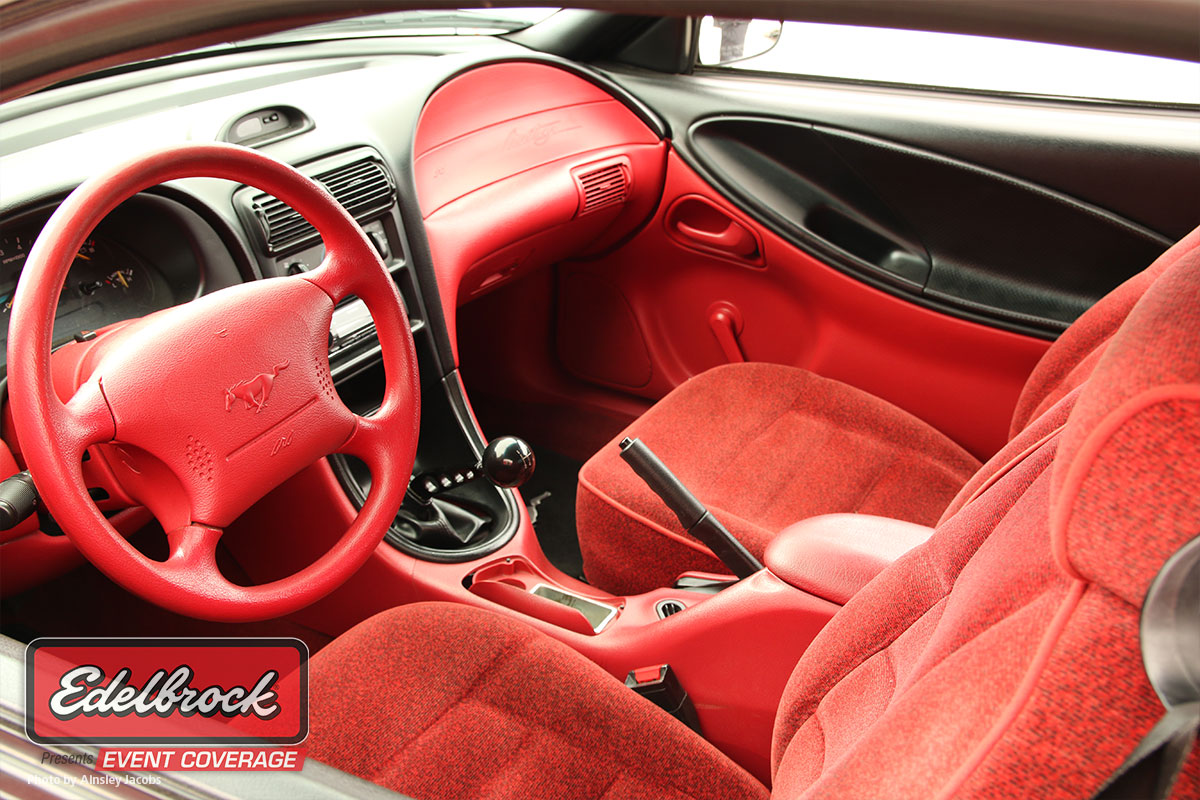 Illinois local Mike Sanders has a pretty neat piece of history ready to run in NMRA QA1 True Street. His opal frost 95 Mustang GTS is only 1 of 7 in its configuration (technically, 1 of 1 if you count the factory high-altitude calibration) and looks like it just rolled off the dealership floor. Stripped of all options, his first-ever Ford has a cloth interior, no ABS, manual crank windows, no rear defroster, no spoiler, no fog lights, and many other missing features. Other than the Edelbrock heads and intake, rear gear, and clutch, the car is mostly in its original stock form. Sanders found the car in Arizona in February and hasn't even launched it once yet, so this weekend will be his first time seeing what it can do and what it will run. 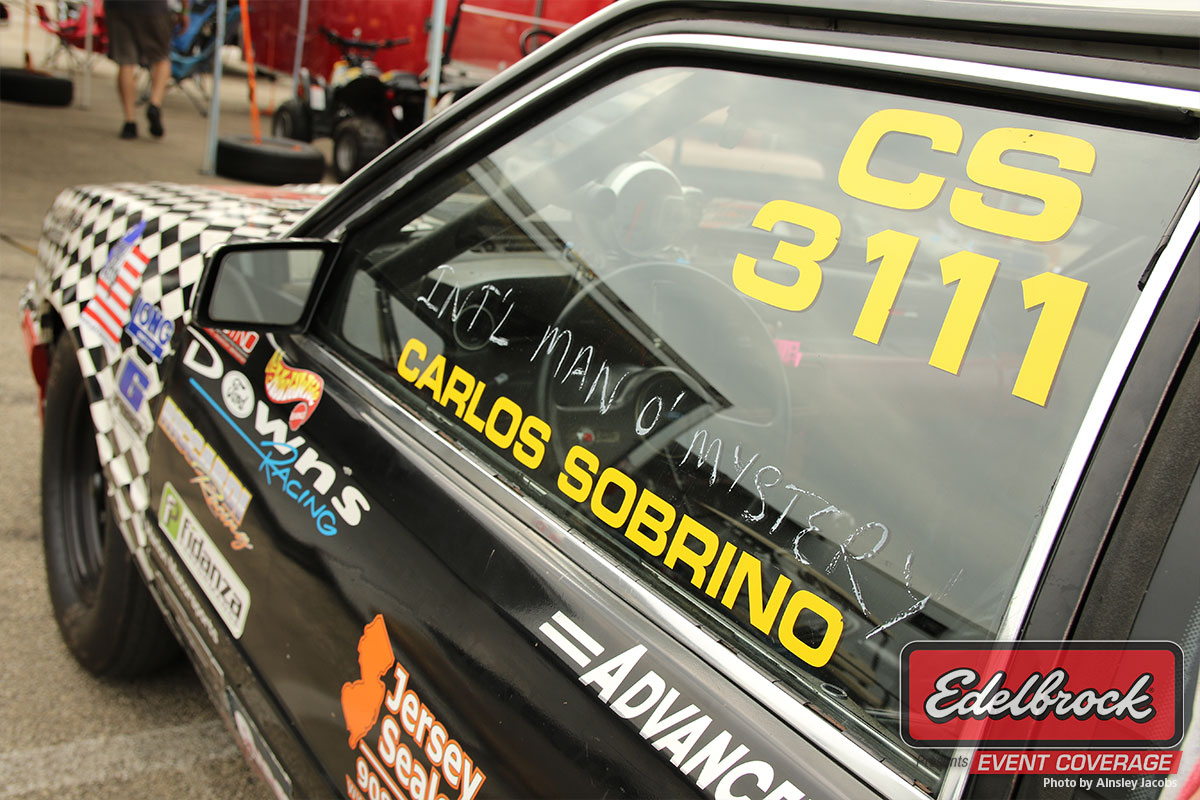 After hustling to make ends meet, everyone's favorite joker from New Jersey, Carlos Sobrino, was able to get it together in time to attend this weekend's race thanks to help from several sponsors including Palm Beach Dyno, Jersey Seal Coating, Taos Performance, Rock Our Vets, and Woodbine Motorsports while Eat My Balls (stop laughing, it's a food truck) will hopefully be joining the team soon. The car hasn't been touched since Mr. Sobrino won the NMRA G-Force Racing Transmissions Coyote Stock class at Maple Grove, Pennsylvania, and he credits the fact that he's running 28-inch tall tires when others are running 26s. 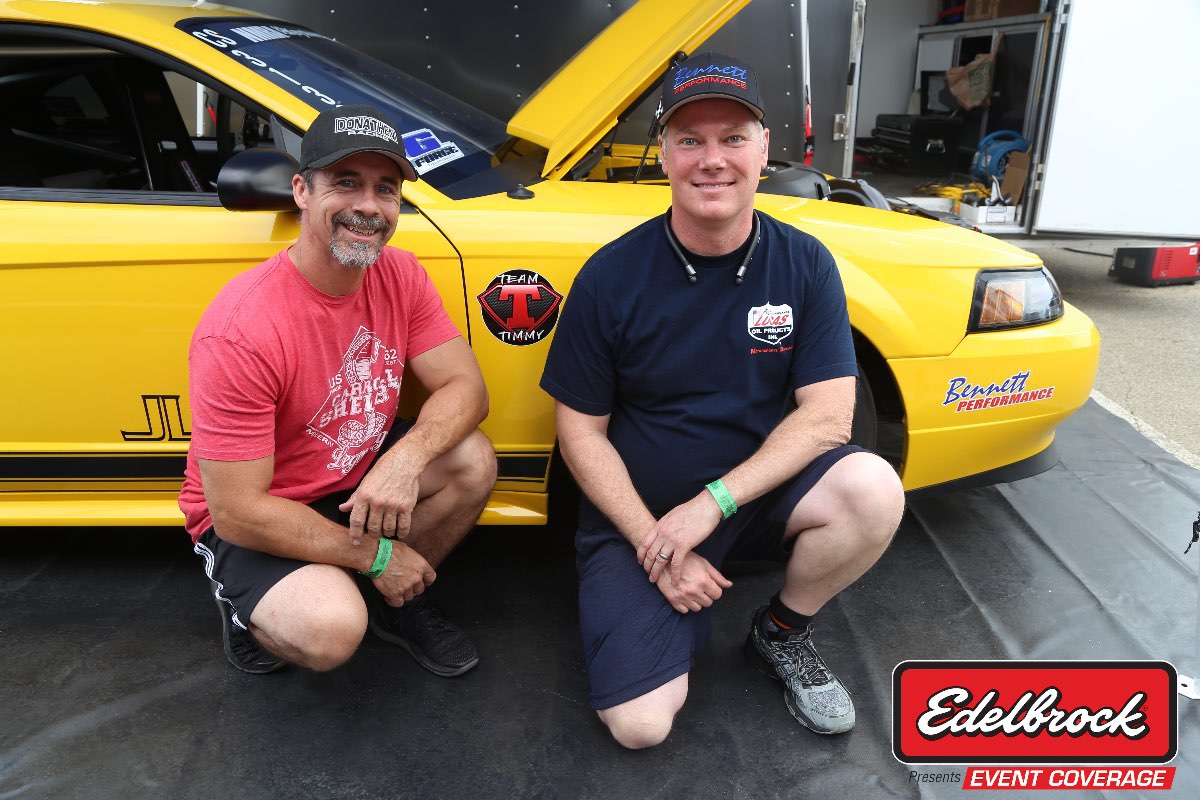 Running a gorgeous, new G-Force Racing Transmissions Coyote Stock machine this weekend at Route 66 is Randy Soper. Fellow Coyote Stock pilot Clair Stewart talked him into joining the class with his 2004 Mustang Mach 1. From there his plan to go fast had him inducted into the Team Timmy crew headed by Tim Donathen, who also helped put together Stewart's Coyote Stocker. Soper's Mach 1 runs a full Team Z suspension, cage, and subframe connectors, and relies on Bennett Performance for chassis tuning support at the track. The Gen2 Coyote-powered New Edge had no dyno time or shakedown runs prior to the race, so Soper is still getting a handle on the combo, which ran a 10.87 at 128 on its maiden voyage. 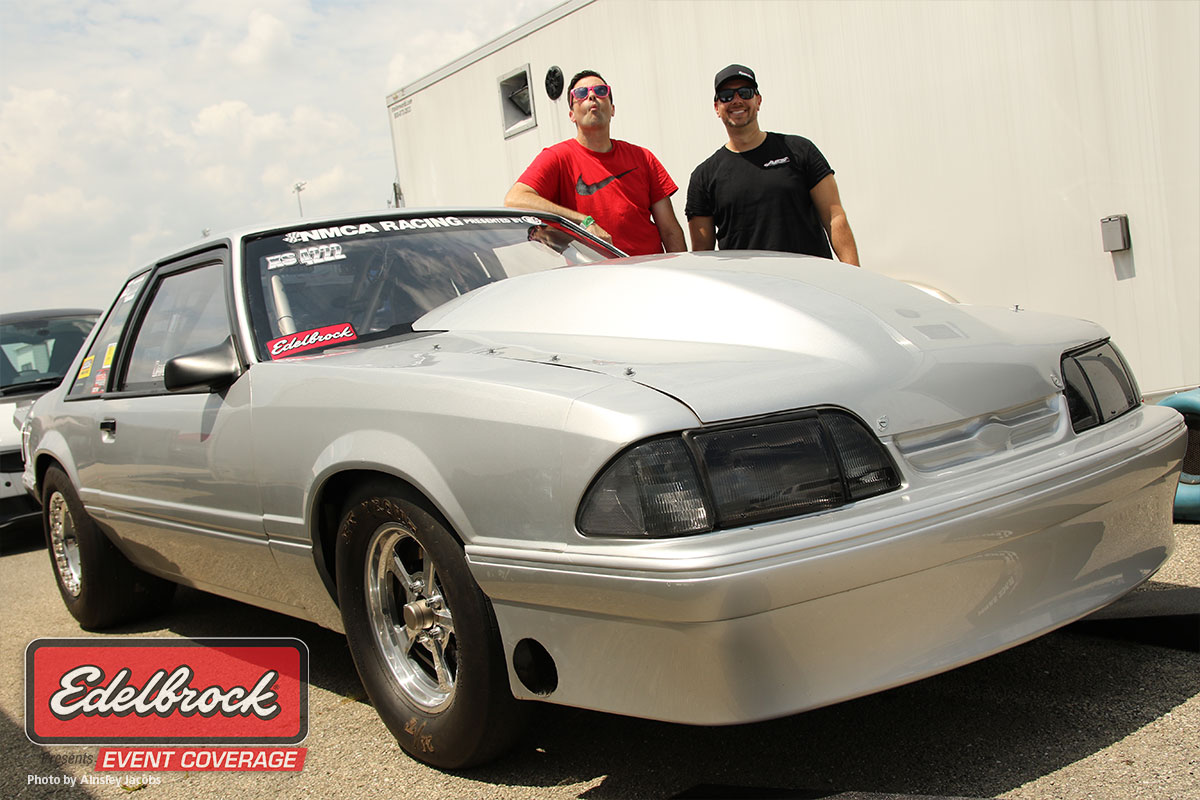 After a three-year absence, Dave The Sprinter Ginter (right) is back and has a whole new combination that he's busy shaking down with wrenchman Sebastian Mion (left). Now based out of Tennessee, Ginter hasn't wasted any time surrounding himself with top names to help get a handle on his new 5.4 L engine built by AES. Matt Bell of Redline Motorsports helped finish the engine and get a base tune, while Derek Craft at Speedcraft Racing helped with wiring and now manages tuning duties of the Holley EFI system. A ProTorque EV1 converter sits inside a Turbo 400 transmission, and Team Z 9 rear end help put the power to the ground which comes courtesy of one of the biggest changes gone is Ginter's old blower and in its place sits a turbo mounted to a Tobener Motorsports-built turbo kit. He's still getting used to the snail's characteristics but made a good go of it in the first qualifying session as he's already run 5.360 at 135.70 mph to put him tenth in the NMRA Edelbrock Renegade/Xtreme Street combo class. 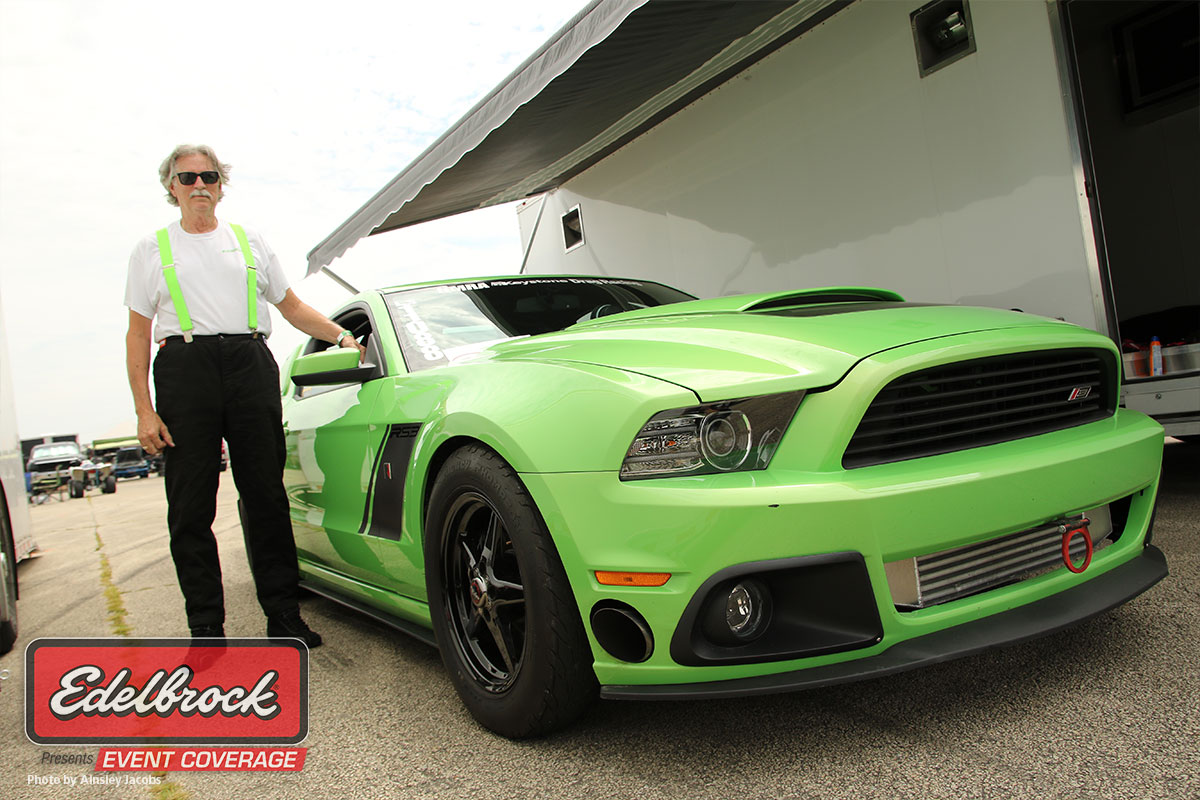 A turbocharged Coyote engine built by the fine folks at MPR Racing Engines powers Larry Starost's Roush Stage 3 13 Mustang in NMRA Advanced Fuel Dynamics Limited Street. Multi-time champion Brandon Alsept of BA Motorsports is on hand acting as crew chief and head tuner of the AEM Infinity system, and Starost ran 8.990 at 152.71 mph so far in qualifying today in the first qualifying session. DeatschWerks injectors are also on board, along with UPR Products suspension components and Moser axles. 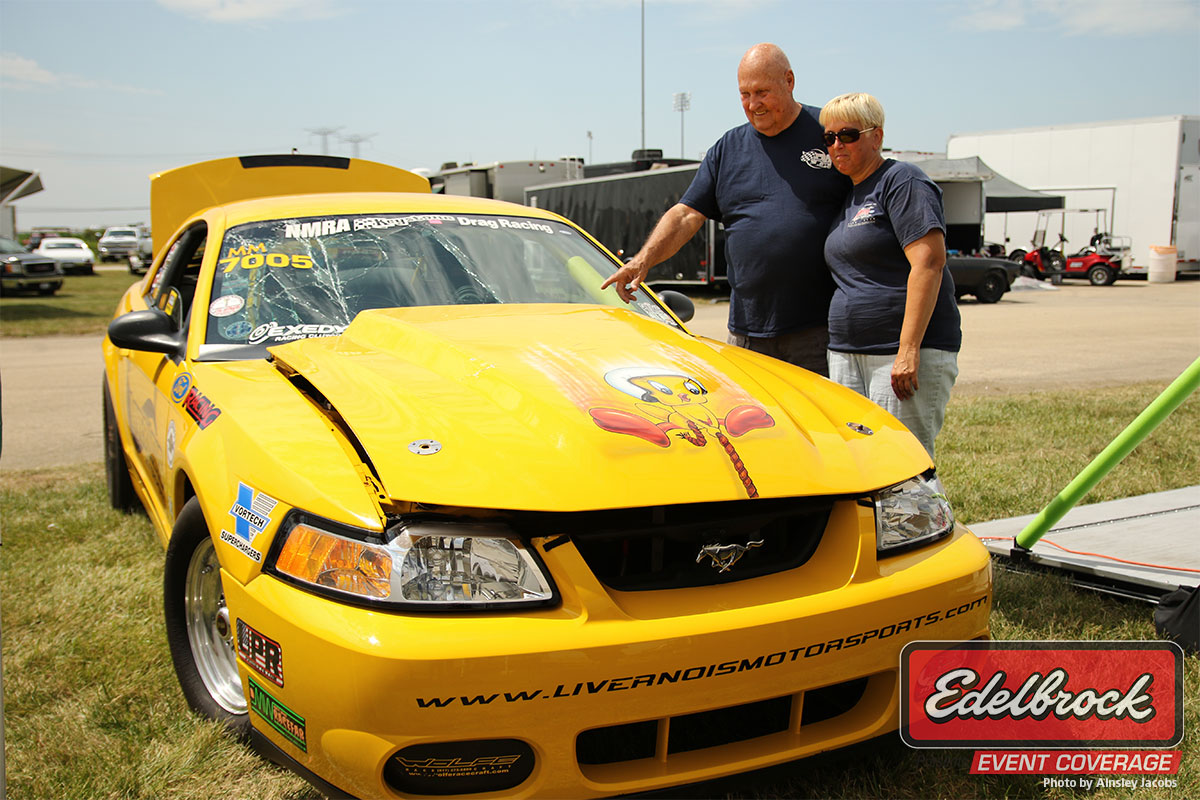 Exedy Racing Clutches Modular Muscle competitor Roxanne Shepard may be down, but she's definitely not out. We aren't pointing fingers or placing blame, but someone forgot to put the hood pins in before her second test pass yesterday and her Vortech-supercharged Mustang's hood blew off around the eighth-mile mark at nearly 100 mph. It destroyed her windshield, but a local ABRA technician is on his way to the track right now with a replacement that should be installed shortly so that she can make a qualifying pass tomorrow. Making the most of a bad situation, Roxanne is enjoying a leisurely day hanging out at the track with her husband, Barry. 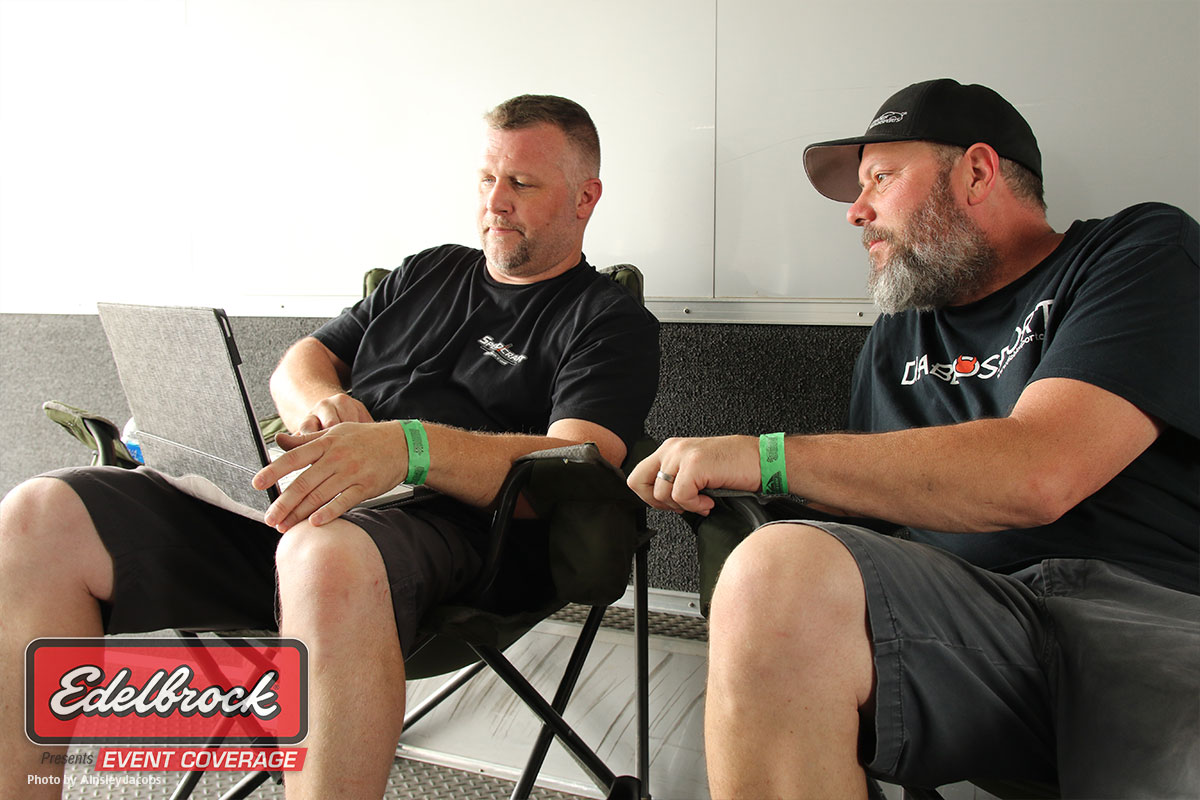 Oh, it's bad. The car hates me, laughed NMRA Edelbrock Renegade racer Bart Tobener as he reviewed the data numbers with crew man Derek Craft of Speedcraft Racing. A first run with new everything for the S550 specifically, a new Proformance transmission and new stator in the ProTorque converter along with a converter charge valve meant there were a lot of post-pass adjustments to be made after his 5.083 at 141.43 mph effort.

A bad vibration all of a sudden has thrown NMRA Detroit Locker Truck & Lightning's Randy Conway for a loop. It's definitely in the rear somewhere, but not in the Weld wheels or tires. The guys were busy trying to nail down the source of the shimmy before the next session was called, and last season's champ had a quick 0.038-second reaction time in his 84 Ranger to wind up seventh after the section round of qualifying. Get qualifying results as they happen right <<<HERE>>> 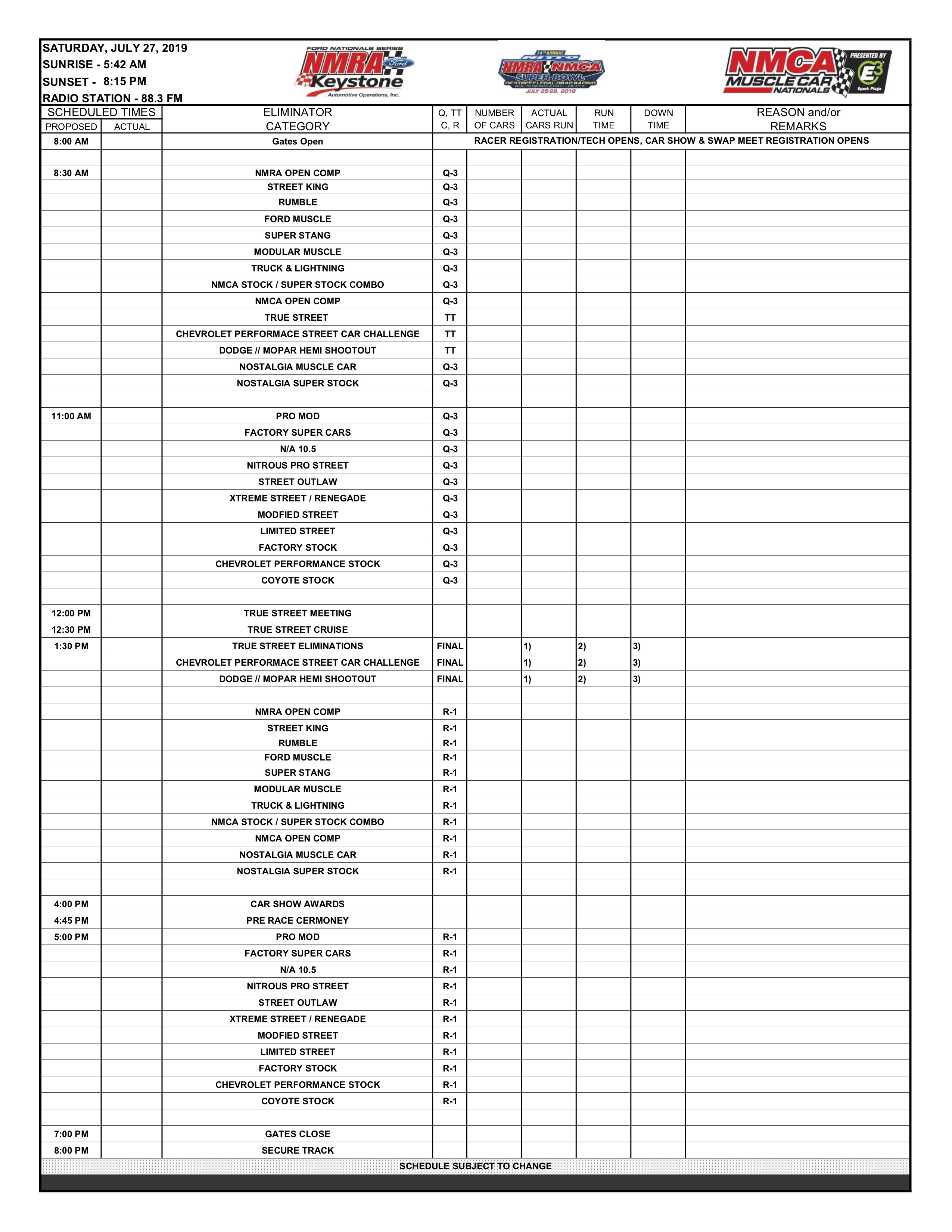 Tomorrow the action starts heating up, so here's how the action will unfold at the 14th Annual Nitto Tire NMRA/NMCA Super Bowl of Street-Legal Drag Racing Presented by FST Carburetors on Saturday.