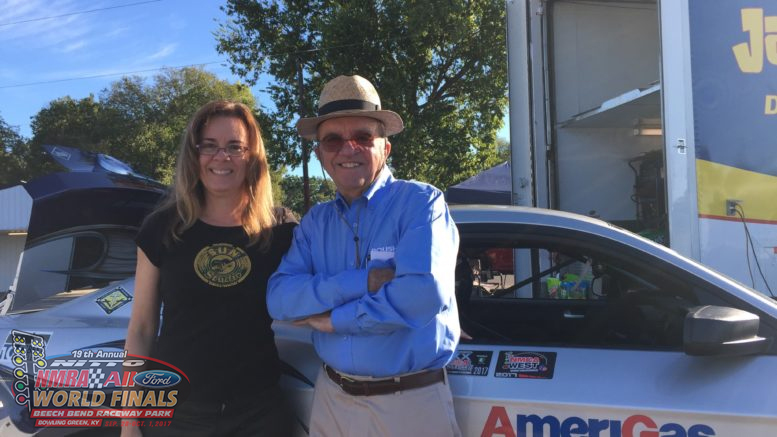 Ladies and gentlemen, today is the day. We're on track to get on track literally with the 19th annual Nitto Tire NMRA All-Ford World Finals at 10am, and we're looking at a record-setting car count! It should be an epic weekend with championships on the line, and we'll keep you posted as things pan out with news, results, and more.

Just a week ago in Indianapolis, NMRA Street Outlaw points leader Manny Buginga was racing for the NMCA Street Outlaw championship as well. Charlie Cooper was leading in points going into the race, and once eliminations had been completed, he maintained that lead to become the provisional NMCA VP Racing Fuels Street Outlaw champion. Buginga rolls in this weekend with the lead, but Cooper is hot on his tail, a scant 30 points behind. Both racers are sure to have their turbocharged machines tuned up, with this event being the last race of the 2017 season and the championship on the line.

A HUGE thank you to all of the great sponsors who support the NMRA and help keep our series going! 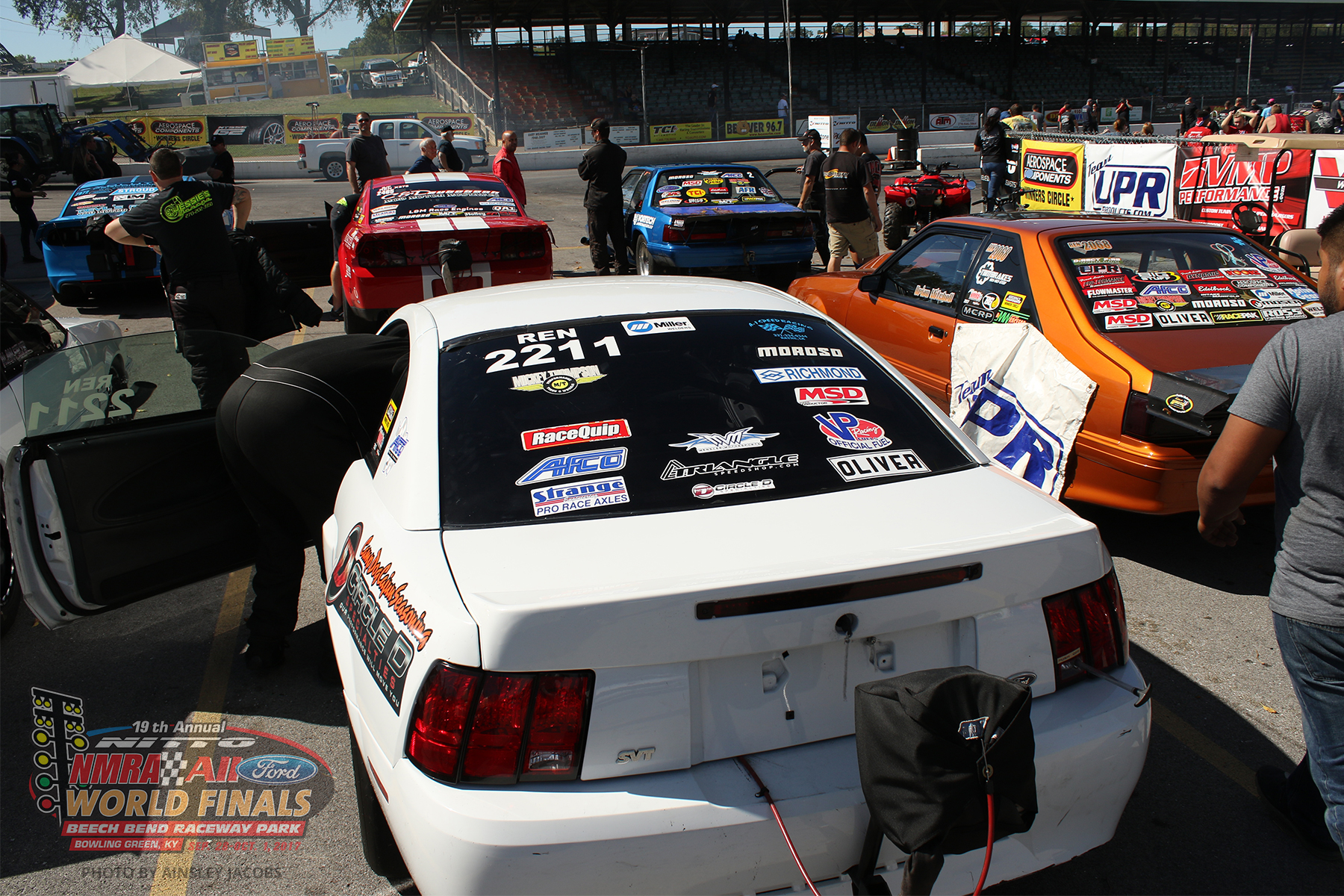 NMRA Edelbrock Renegade is in the lanes and we're running test-and-tune with heads-up qualifying scheduled to begin at 5:00pm.

Welcome to the NMRA family, James Webb! This is Webb's first race with the series, as Tim Lyons and crew recently finished up the build of Webb's beautiful G-Force Racing Transmissions Coyote Stock 87 Mustang. Running first-gen Coyote power under the hood along with a G-Force Transmissions G-101A and a Ram clutch, Webb is using the event to get acquainted with the car, as he plans to run the complete NMRA series in 2018. Look for an article about Webb and his Fox body to be published on racepagesdigital.com soon! 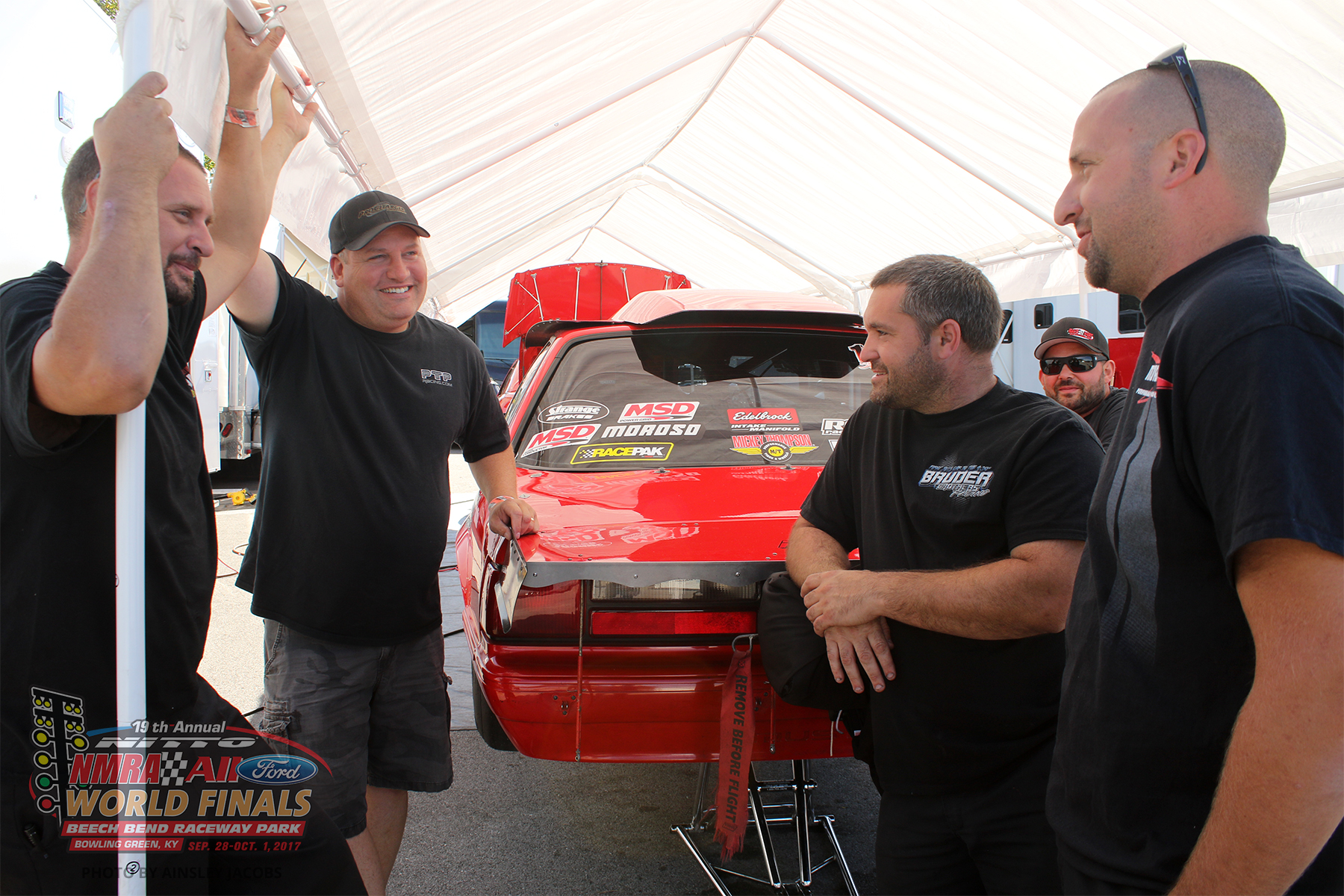 The Manny Buginga/Bruder Brothers crew had a meeting of the minds this morning to either discuss ways to muscle their team's two VP Racing Fuels Street Outlaw cars to the front, or to just rehash the shenanigans from the night before who knows. 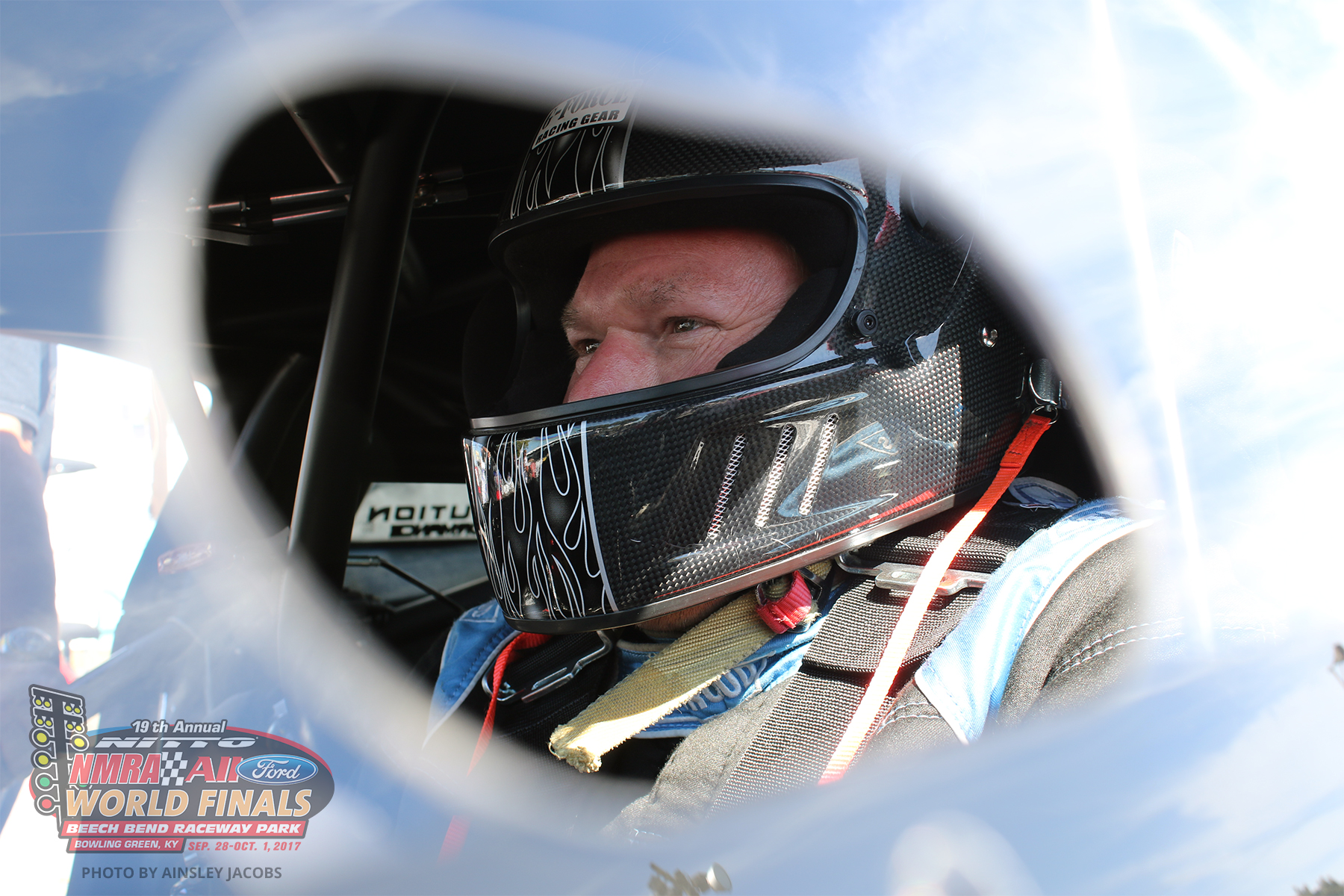 Brian The Iceman Devilbiss had focus and determination in his eyes this morning as he lined up his turbocharged Evolution Performance 13 GT500 to make a few test hits, with wife and fellow racer, Michelle, proudly by his side. 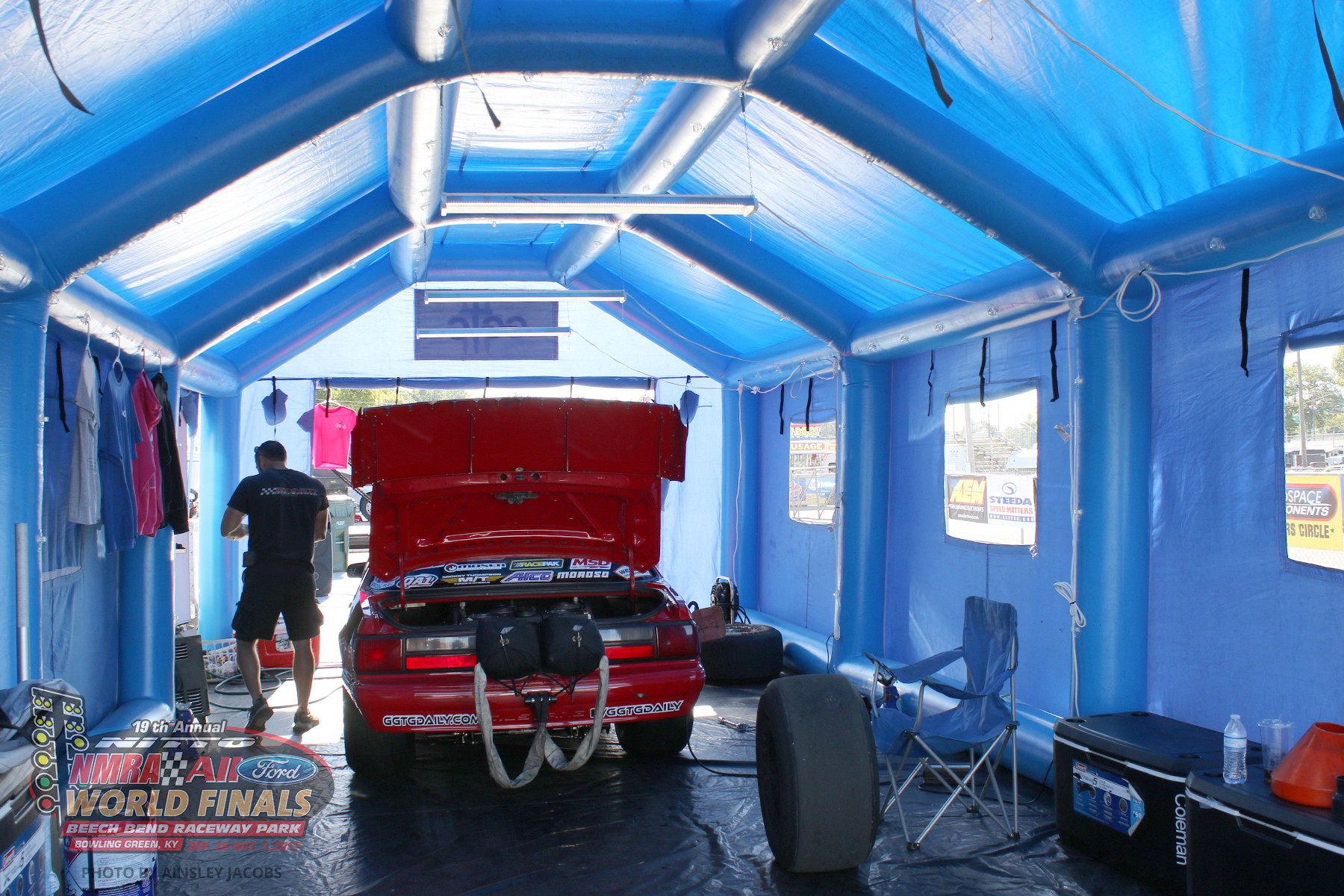 Currently sitting third in points for VP Racing Fuels Street Outlaw, Leroy Nabors Jr. is working in style this weekend in the shade and comfort of this most excellent pit area. 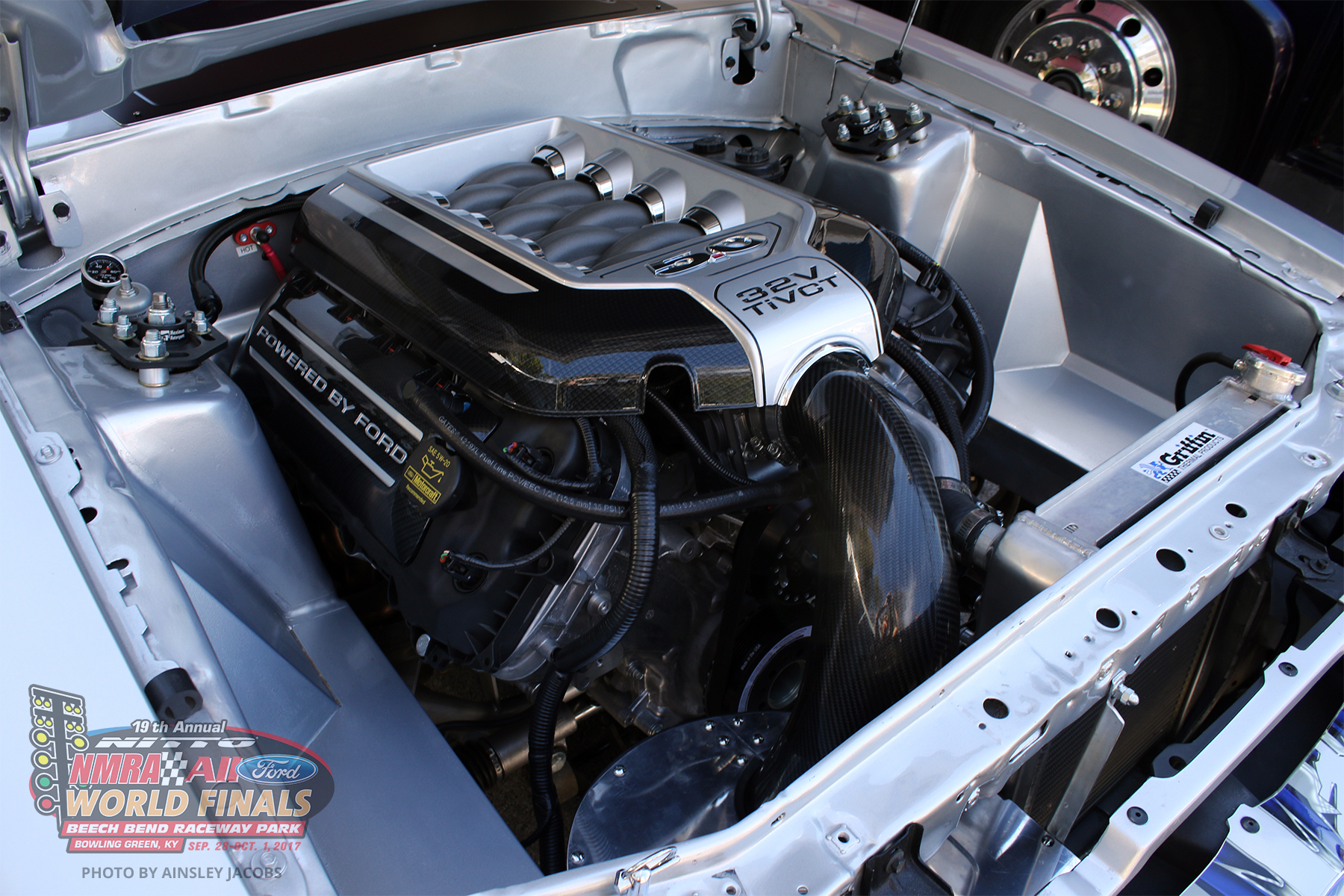 G-Force Racing Transmissions Coyote Stock racer Clair Stewart II ran a new personal best yesterday during testing, clicking off a killer 10.19-second elapsed time. Stewart attributes the improvement to an abundance of testing, running laps at the Detroit-based 3 Pedal Throwdown series at Milan Dragway, and simply figuring out what his well-built Mustang likes. He's improved by a tenth of a second at each NMRA race this season, although he's been running the same Fidanza clutch, G-Force G101-A gearbox, and JLT Performance components all year long. Recently, Donathen Racing fabbed up the custom air box seen at the front of the engine bay, and Stewart is hoping to shave a few thousandths off his run later this evening. 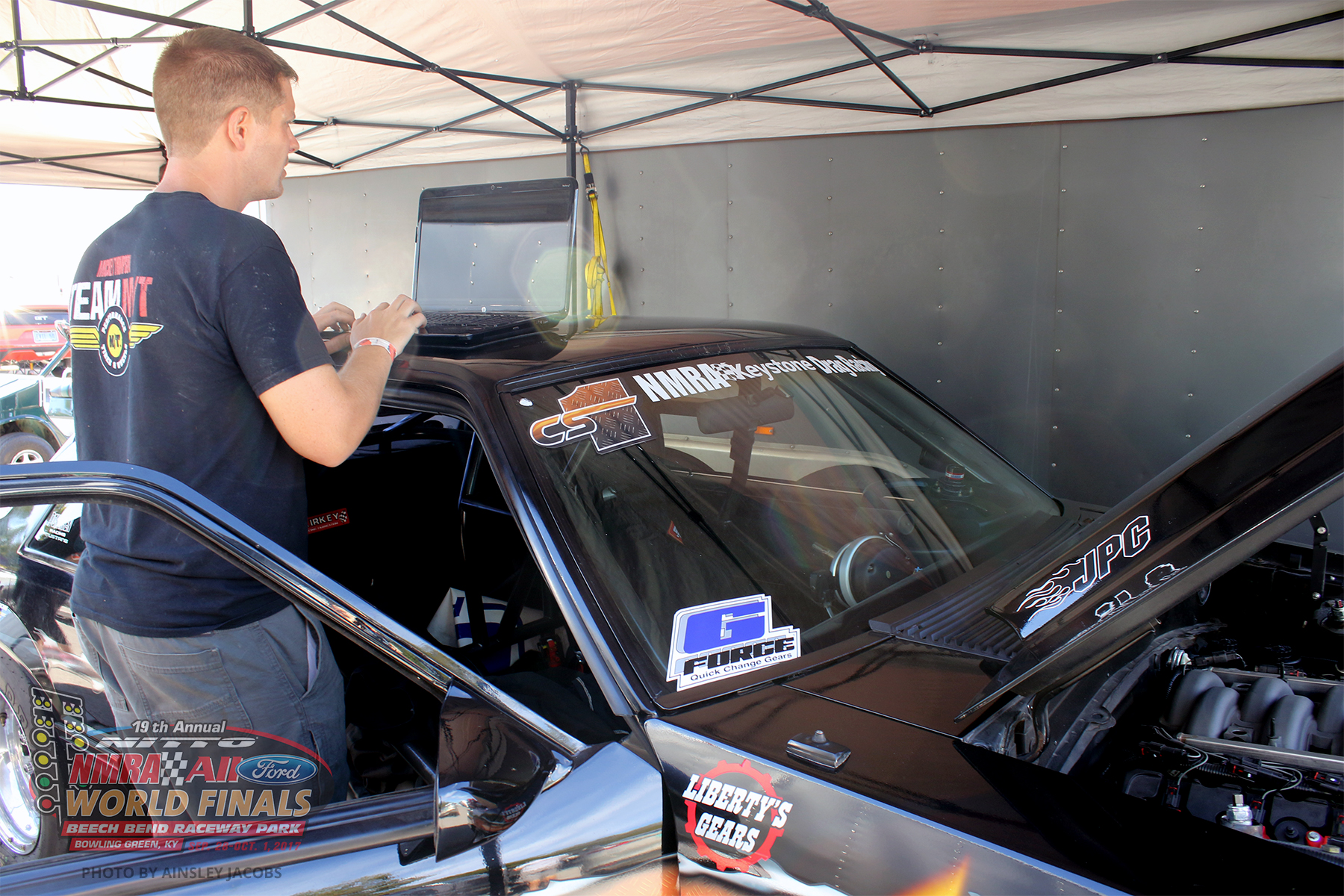 Two-time NMRA G-Force Racing Transmissions Coyote Stock champion Drew Lyons is hoping to defend his title this weekend, and made a few drivetrain adjustments in hopes of being able to lean on his 88 Mustang a little harder. 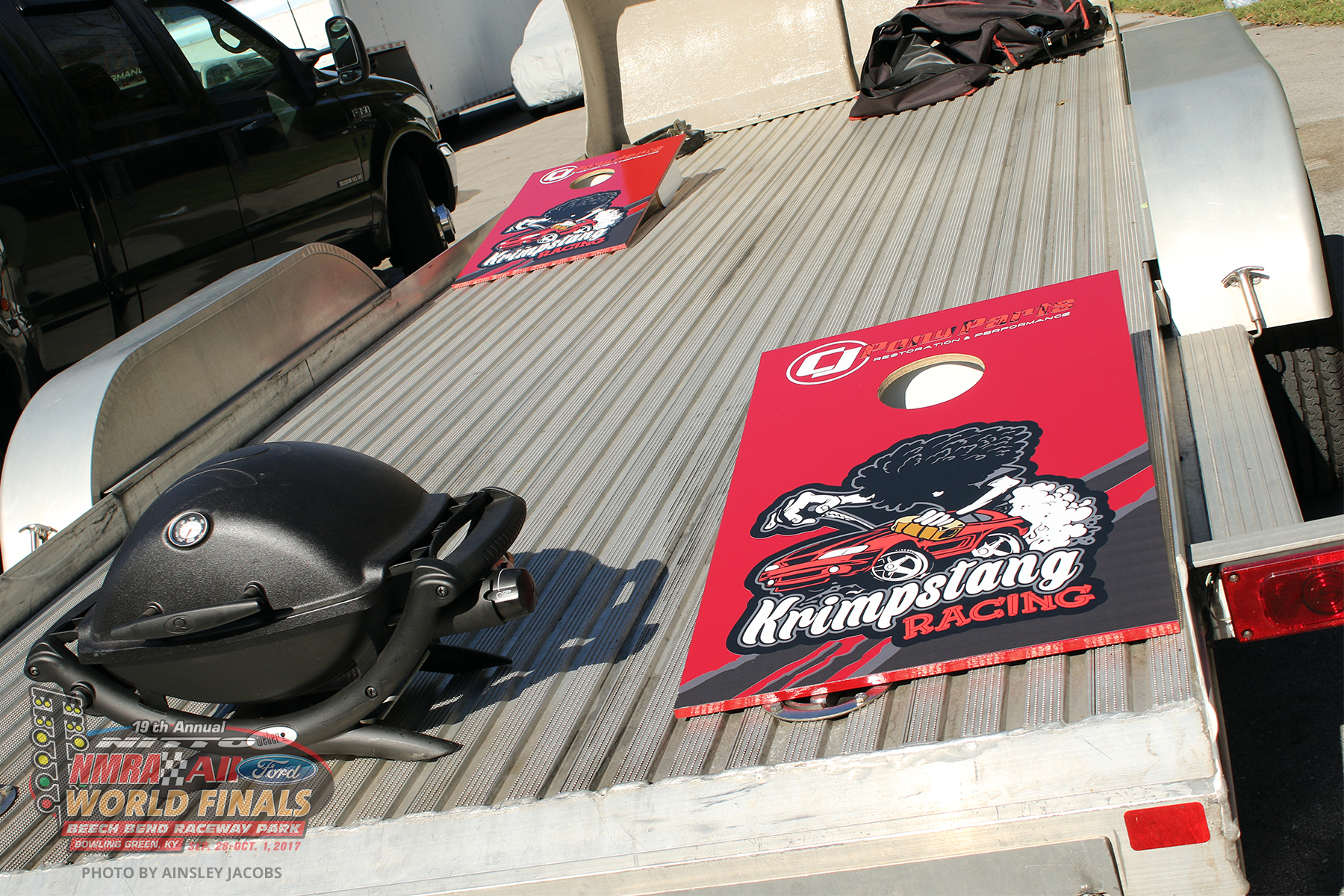 After racing, the two most important things at the track are food and fun and Bill Tumas has got both covered with his grill and cool, custom Krimpstang Racing cornhole boards. Speaking of racing, Tumas has adjusted the shims on his Fidanza clutch setup for the fourth time this year to see if it'll move his ETs in the right direction. He also changed to a set of wider wheels for a larger contact patch and is stretching his tires for all they're worth. Similarly, a new set of front tires from this decade! have been bolted on to his Mustang Cobra. Tumas is sitting in tenth in Richmond Gear Factory Stock points, and just wants to have a good time since he knows there's no championship to worry about.

You don't generally see NACA ducts on drag cars, but when you stash a pair of 76mm turbochargers where the rear seat used to be, you need to direct in some fresh air to fee the hairdryers. Also stashed the back is the air-to-water charge cooler that sends chilled atmosphere up front to the 400ci small-block Ford. The car's owner, Marshall Carpenter, attempted to the run the ididit Outlaw True Street class last year, but alternator problems suggested he leave the '79 Mimosa Yellow Mustang at home, so he's here and ready to make up for lost time.

Straight from Discovery Channel's Street Outlaws: New Orleans is Bobby Ducote and his Lil' Legend Mustang. Ducote made a name for himself street racing in a slick, black Ford Maverick, and made the switch to the Fox Body a little over a year ago. He'll be on hand this weekend signing autographs and making some hits on the track.

The swap meet is already stirring up if you're looking to score some deals on some used parts. Vintage Gt40 intakes are always a good score, though the $525 asking price might be cause for some haggling in the price.

With a very favorable weather forecast, it's no surprise that the car show this weekend at Beech Bend Raceway here in Bowling Green, Kentucky, is already filling up.

QA1 True Street is always a huge part of the NMRA finals in Bowling Green, and Casey Schumacher of Murray, Kentucky, is here to stake his claim in the class. His '86 Mustang coupe sports a 521ci big-block Ford engine, and if that weren't enough on its own, Schumacher equipped it with a 98mm Garrett turbocharger. With 3.27 gears out back and an AOD transmission, it makes one heck of cool and quick street car.

VP Racing Fuels Street Outlaw racer John Urist had some transmission issues with his Turn 14 S550 Mustang during testing. Mike King and crew were handling the installation of the replacement transmission while wrist was off conducting a radio interview for the local BeaverFM radio station, which is here displayed on the huge manufacturer's midway this weekend.

Running 8.08 in the quarter-mile after letting off at the 6-second mark, Haley James and her ProCharger Coyote Modified Mustang are ready for tonight's qualifying. James affirms that she and her Hellion Turbo team haven't made any major changes, but rather are focusing on squeezing every ounce of performance out of every area of the car through miniscule changes, focusing on the drivetrain, suspension, and a recently refreshed Coyote engine.

Hanging out in the JPC Racing camp this weekend are a few new ponies, racing in the Turbo Coyote Shootout specialty class as well as Modular Xtreme. Brad Bench is piloting a white turbo Coyote-powered Mustang in TCS, while JPC's Ronnie Reynolds is behind the wheel of this gorgeous grey MX entry.

No, Clint Bates and his crew guys, Caleb and Alex, aren't getting ready to drop their new album they're just joking around while they're waiting for the call to the lanes. Bates, who spent four years in the Marines, is putting laps on his 1,800+ horsepower, Semper Fi Hydroseed & Erosion Control 13 Boss 302. Known as the Bossinator , the Grabber Blue Mustang was built by JPC Racing and pushes a whopping amount of boost from an 85mm Pro Mod turbocharger through its engine. A PowerGilde transmission and custom Ford 9 rear end help throw all that power to the racing surface, and Bates has run a personal best of 7.64 at 185 mph over the summer. He scored a new personal best 60-foot time of 1.20-seconds today, though, and is going to push for more as the temps drop this evening.

Oops. After resurrecting his 03 Mustang from a fire that devastated his Georgia-based shop, MV Performance, Tim Matherly isn't letting a little thing like a busted G-Force 101A transmission dampen his spirits. A loaner gearbox from Jacob Lamb meant Matherly and his crew chief, Jason Sloan, had practically no down time and will be able to make the first round of G-Force Racing Transmissions Coyote Stock qualifying this evening, and a replacement is already on its way from Leonard Long. 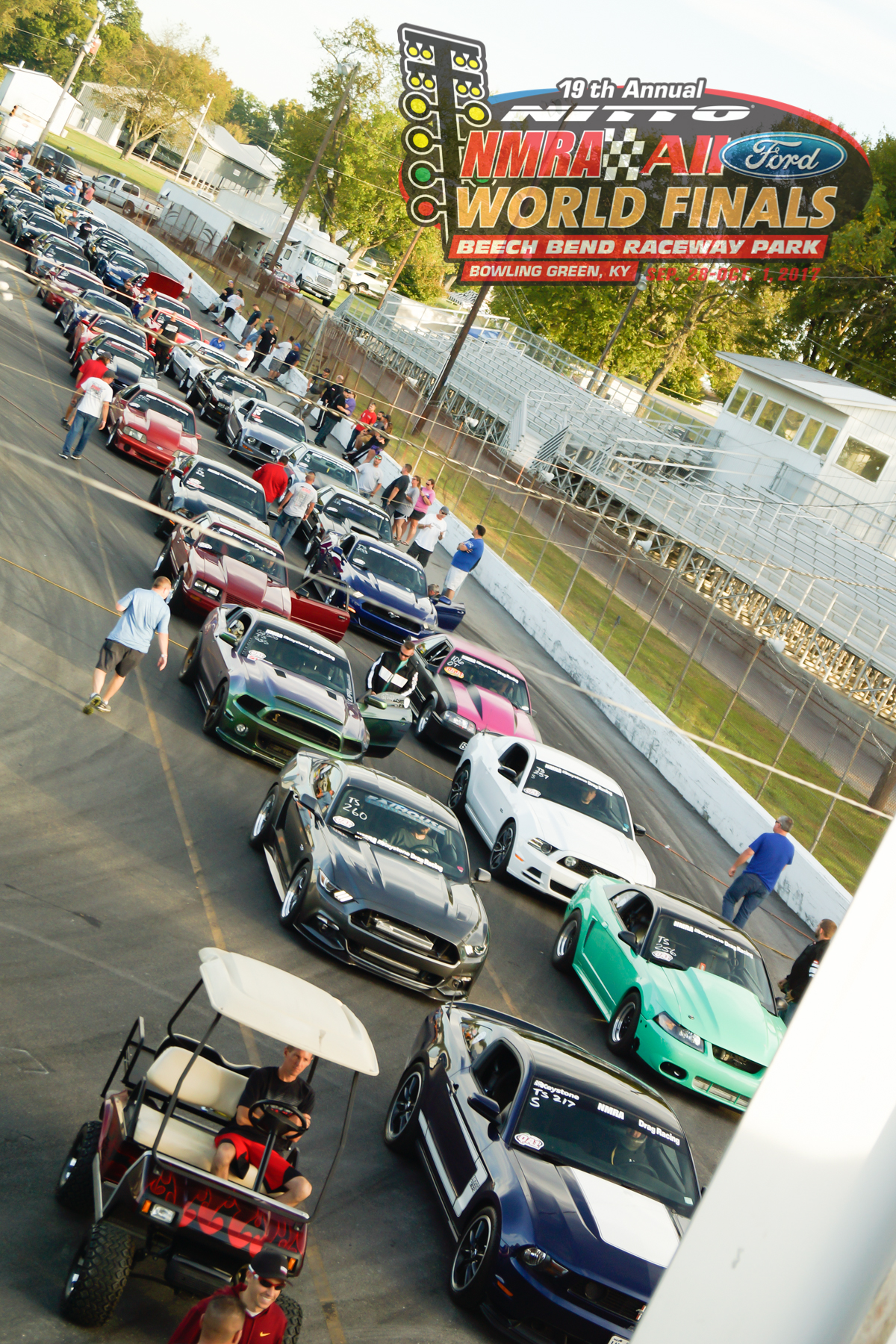 All of the heavy hitters are here to run QA1 True Street presented by Muscle Mustangs & Fast Fords magazine. We already have 95 cars tech'd in and they are just starting their second time trial run of the day. Joliet True Street winner Cal Hayward is here looking to post another 7-second average, but he'll have his hands full this weekend with all of the quick cars here. Qualifying round one is in the books. Get the results HERE! *Saturday's Schedule* 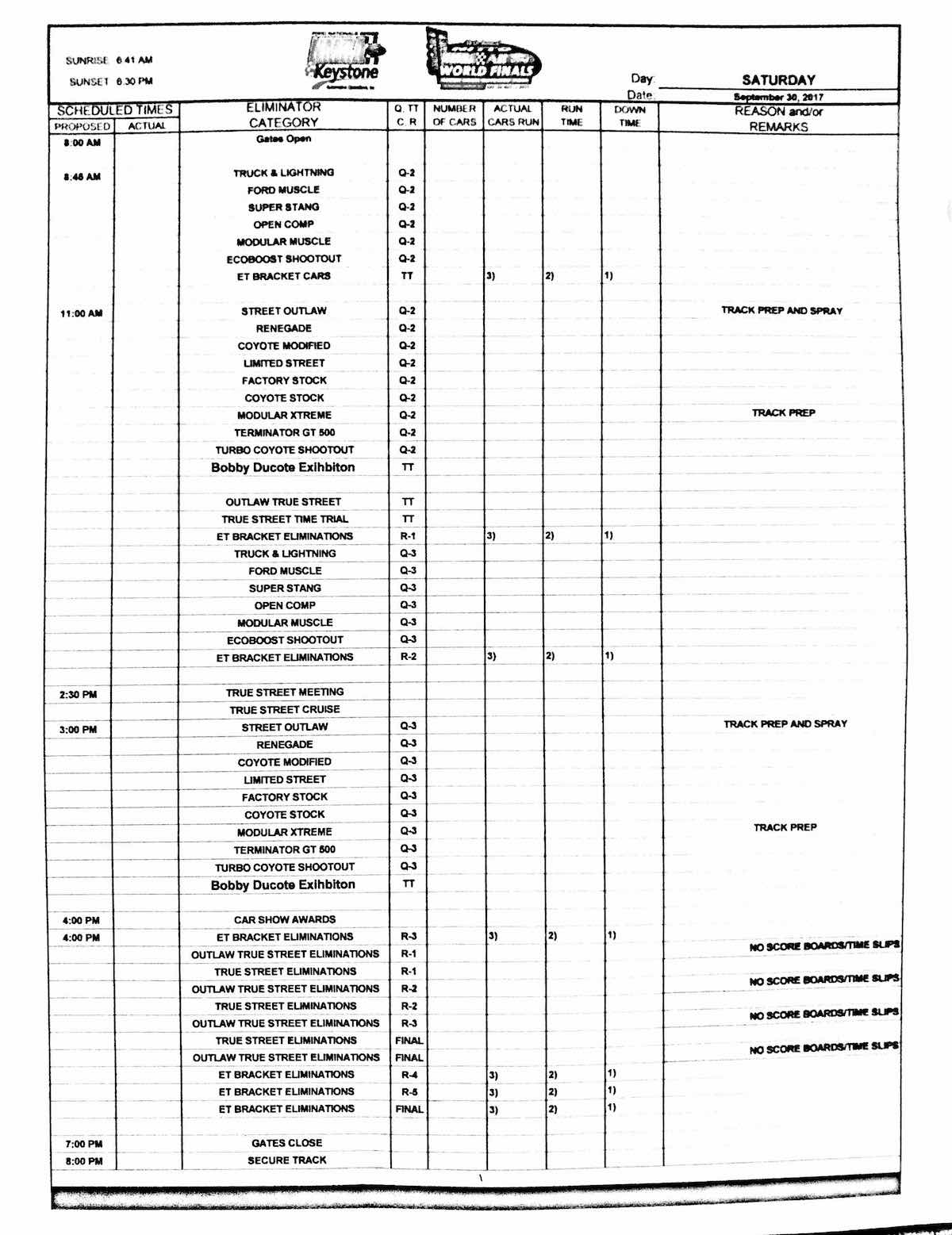 DON'T MISS YOUR LANE CALL! We encourage ALL competitors to sign up for NMRA's text messaging system this weekend. There are some issues with the radio broadcast. The system will be updated throughout the day and we urge all competitors to get on the system. Directions are listed <<HERE>>
Nitto Tire
,
NMRA World Finals
,
Steeda