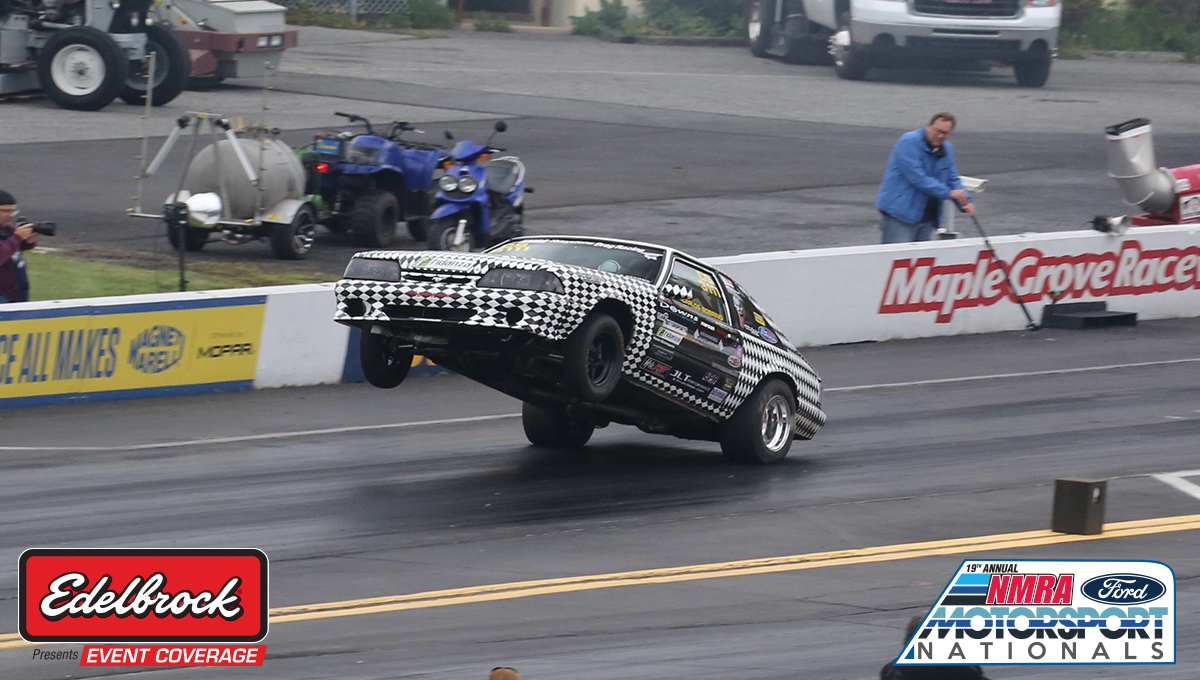 In a rare occurrence, the sun is shining at Maple Grove Raceway as the 19th annual NMRA Ford Motorsport Nationals is underway with a full weekend of championship drag racing and street car competitions. Check back often to keep up with the latest news from the pits and on the drag strip, or watch along at www.speedvideo.com for Live video coverage. 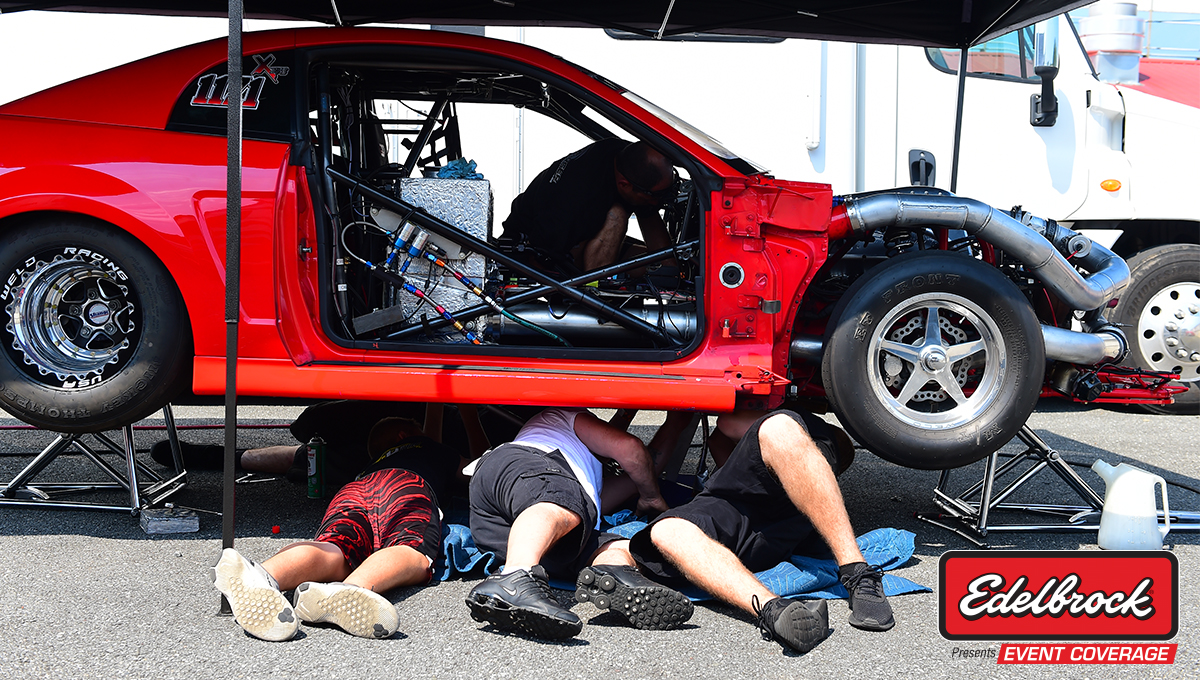 Manny Buginga is back in NMRA action and he brought his two VP Racing Fuels Street Outlaw car with him. Here the team is swapping stators in the Neil Chance Racing Converters billet unit to compensate for the warmer weather conditions. Buginga said they are going to test the turbo car (shown) and his red/white/blue supercharged ride. They tested slicks yesterday during a private test session but he bolted the Mickey Thompson Pro 275 tires back on for today. 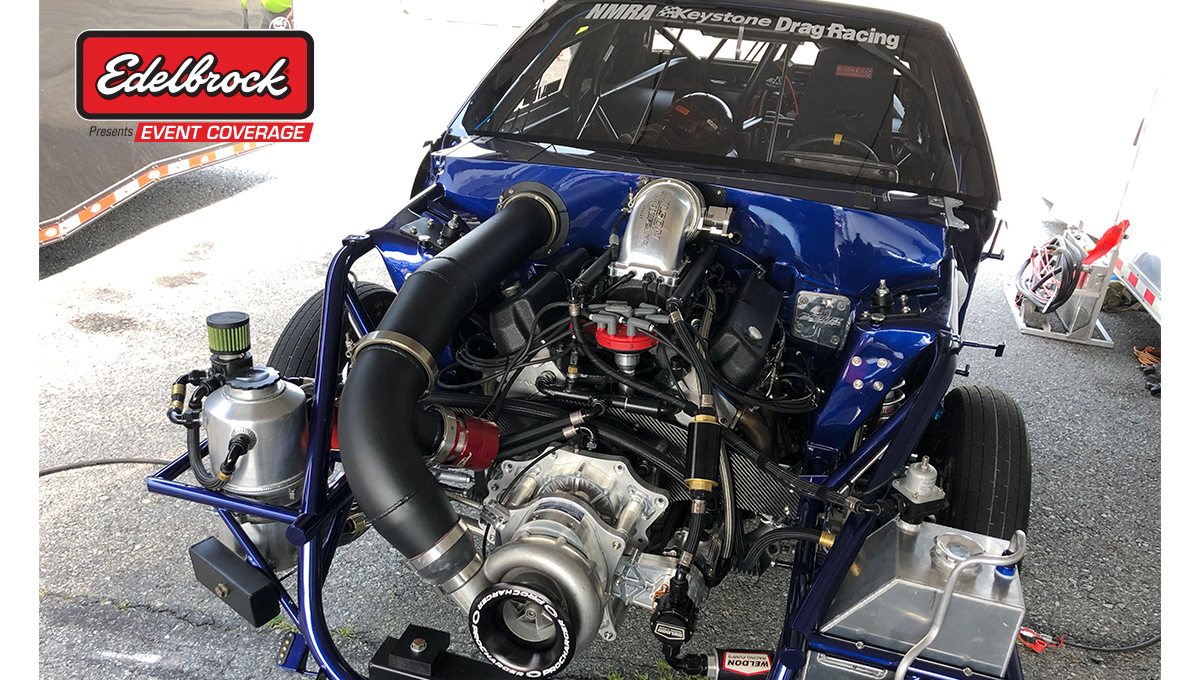 Brian Mitchell is back home at NMRA and he brought along one hell of a ride, a revamped Wizard 1.0 that was redone by Lyons Custom Motorsports. The engine is well-known to the Edelbrock Renegade field as they were flogging it in Adam Arndt's copper Mustang last year. It carries a 390ci displacement and is pumped up by a ProCharger F-1A-94. 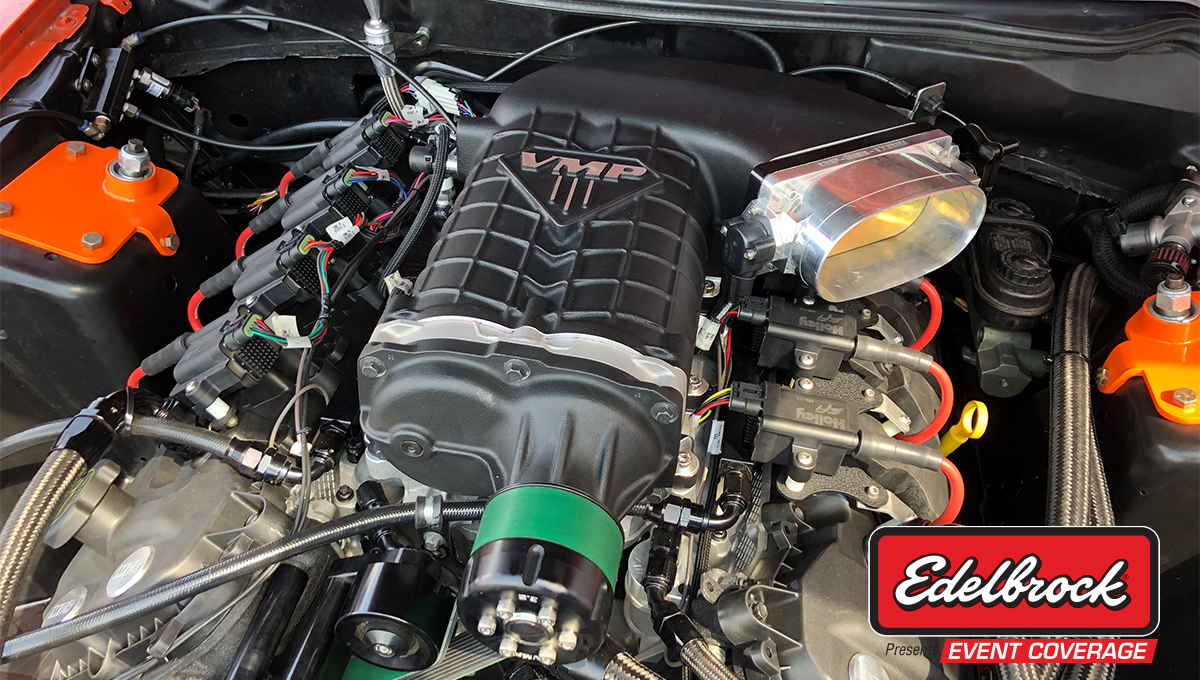 UPR Products' Bill Putnam, who won the NMRA/NMCA All-Star Nationals, made a supercharger swap since the NMRA Gateway Rumble last month. He went from a VMP Performance Gen3 supercharger to the brand-new Gen3R blower. It still uses a EATON TVS2650 rotor package but a new technical partnership between VMP and Magnuson netted a more efficient case and inlet system. Putnam has been a best of 8.84 at only 152 mph and they are hoping the new supercharger system will pick up some speed and drop elapsed time. UPDATE: It is just test and tune not official, however, Putnam crushed his previous best time and posted an 8.69 at 157 mph performance. We also heard that Jim LaRocca has handled tuning and consulting on Putnam's entry, showing the immediate impact of those changes. 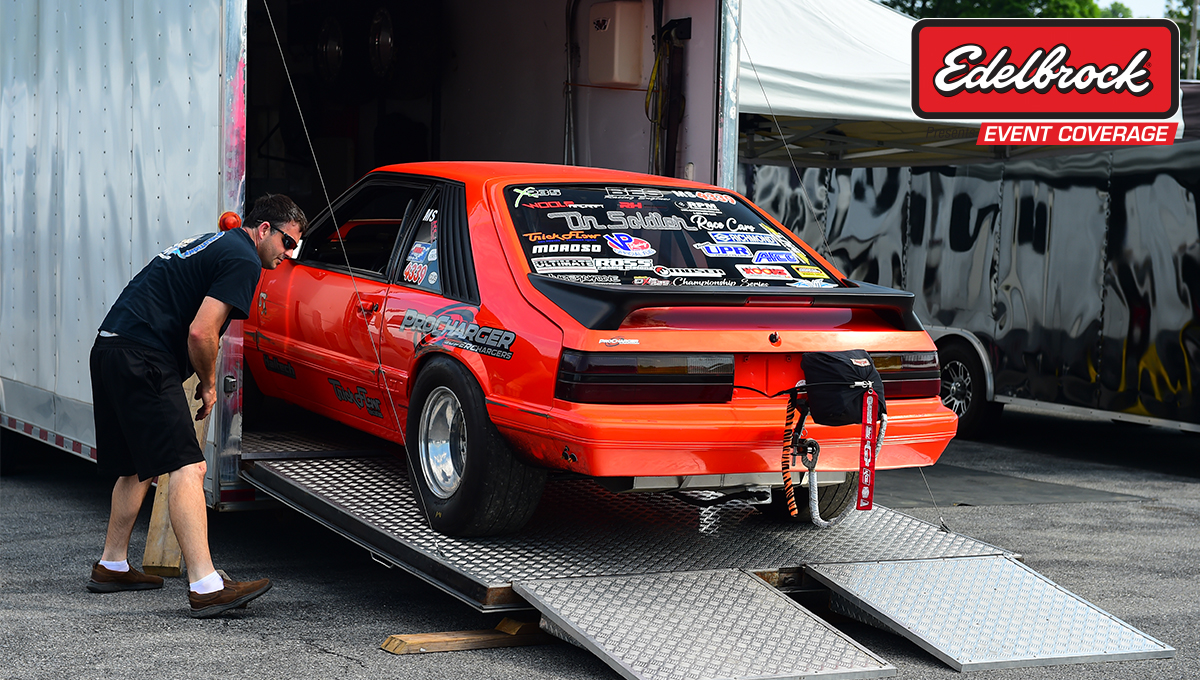 Martin Connelly and the rest of the team rolled in overnight and they brought their ProCharger Modified Street machine with them. The team grabbed the class win last month during the NMRA Gateway Rumble with a well-proven combination a 363ci small-block Ford with Trick Flow High Port cylinder heads and a ProCharger D-1X supercharger. The car has dipped into the 7.70s with speeds well over 170 mph. 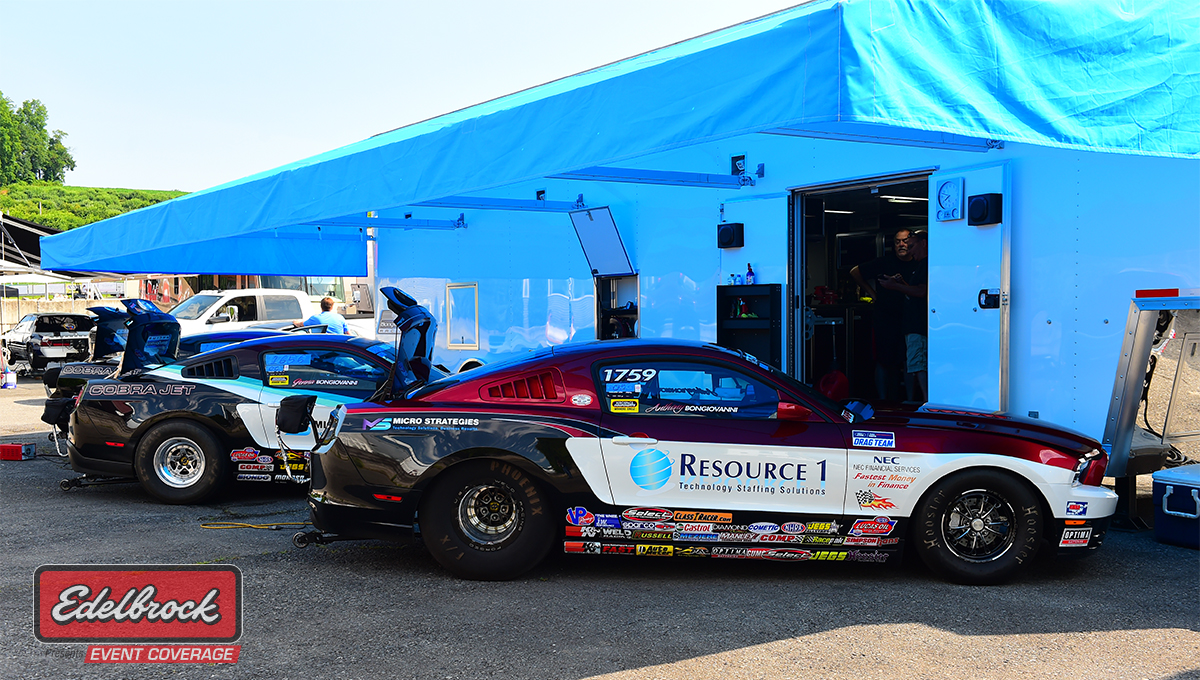 Anthony Bongiovanni is normally found in NHRA Stock and Super Stock with his fleet of Cobra Jet racecars. This weekend he brought three Cobra Jets to compete in ARP Open Comp. He will be driving the Super Stock car while Ken Miele and Tom Martino will be handling the driving chores in the Stock Eliminator vehicles. 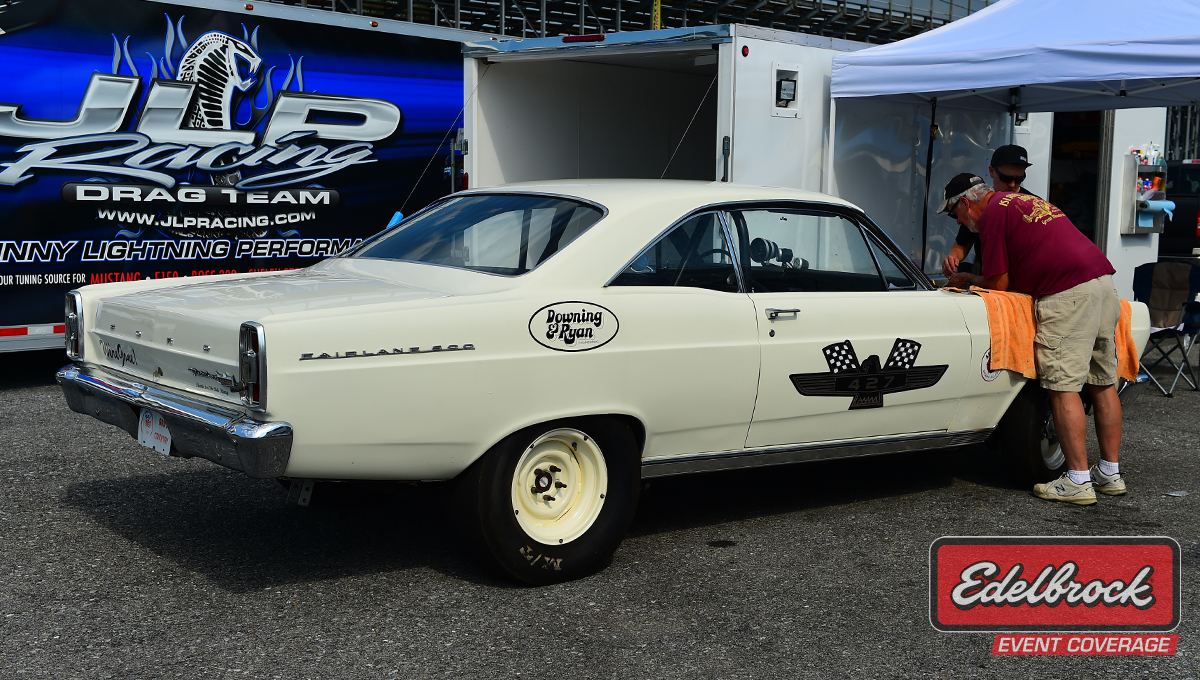 One of the neat aspects of the Ford Motorsport Nationals is the unique Ford muscle that comes out to have fun. Pictured is Scott Davies flawless 1966 Ford Fairlane and he has no problem running it on the drag strip. The car runs in the 10s and he will be joined by longtime friend and noted Cobra Jet racer Vinny Lyons with the Rye Ford Cobra Jet. 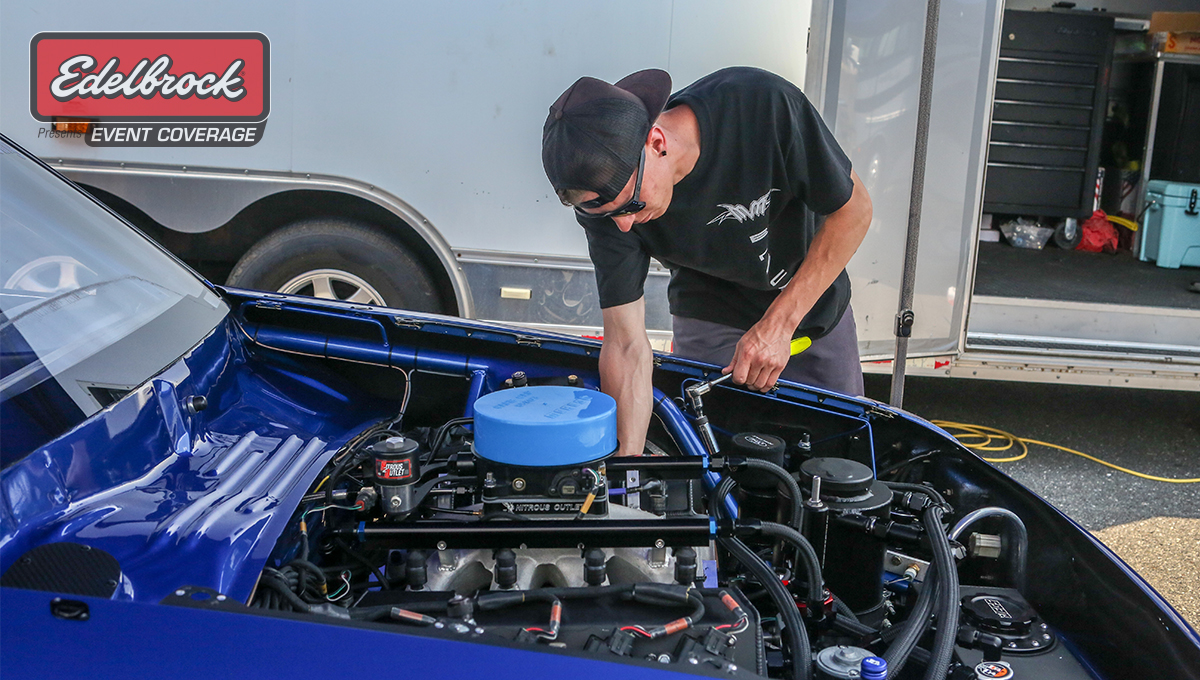 Twenty-one year old Chris Hare works on his 399ci small-block Ford as he prepares to make his NMRA Edelbrock Renegade debut this weekend at the Ford Motorsport Nationals. The large sized Windsor engine sports a pair of Brodix-Neal cylinder heads, Nitrous Outlet plate system, and a FuelTech FT600 engine management system. The car has run 4.90s, a number he thinks he can improve upon as he works with Vinnie Palazzolo on the tune-up. 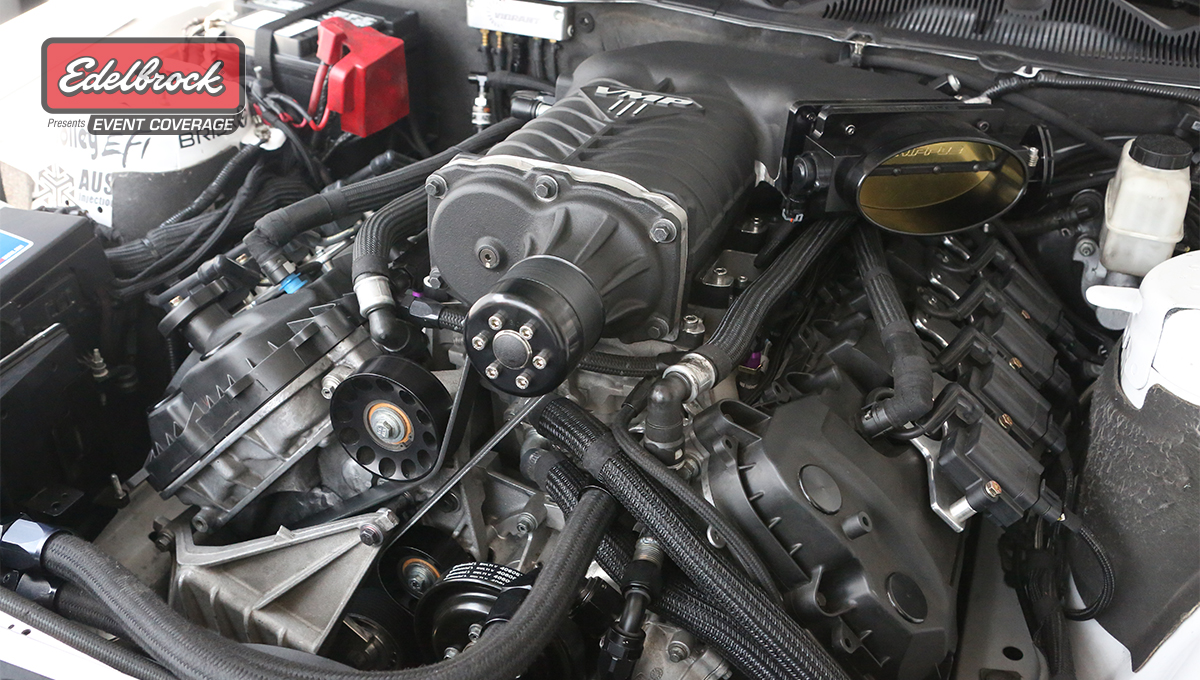 Samantha Moore is new to Advanced Fuel System Limited Street with her 2013 Mustang GT and she is wielding an 8-second ride. They are testing a new Bear Coyote engine block, which shows great promise with healthy leak down that is reportedly better than their previous sleeved Coyote block. Moore tunes here VMP supercharged combination with a Holley EFI Dominator engine management. The car ran low 9s in testing today but Moore said they've gone 8s earlier this year. 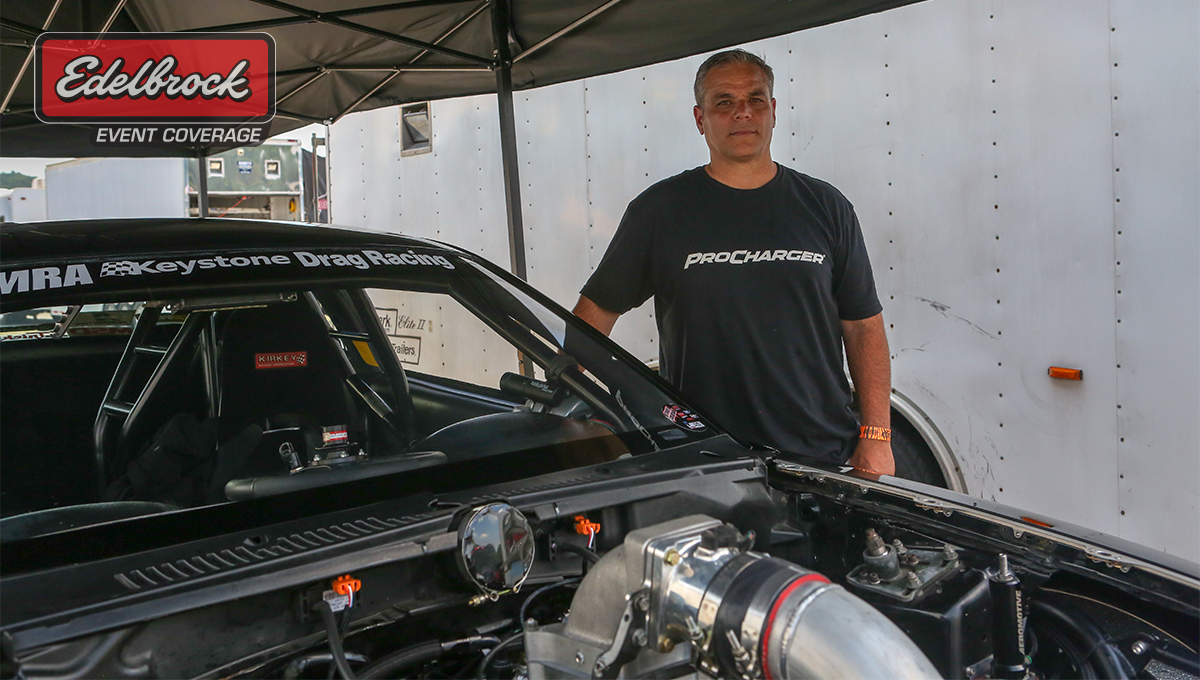 Longtime NMRA racer and bar room aficionado Chip Provenza reappeared on the scene and he brought his familiar 2003 Mustang Cobra clone with him. The car is radically different than it was back in the old Drag Radial days. Today it sports a 363ci combination with a ProCharger F-1A-91 supercharger and packs 4.70 potential in Edelbrock Renegade. 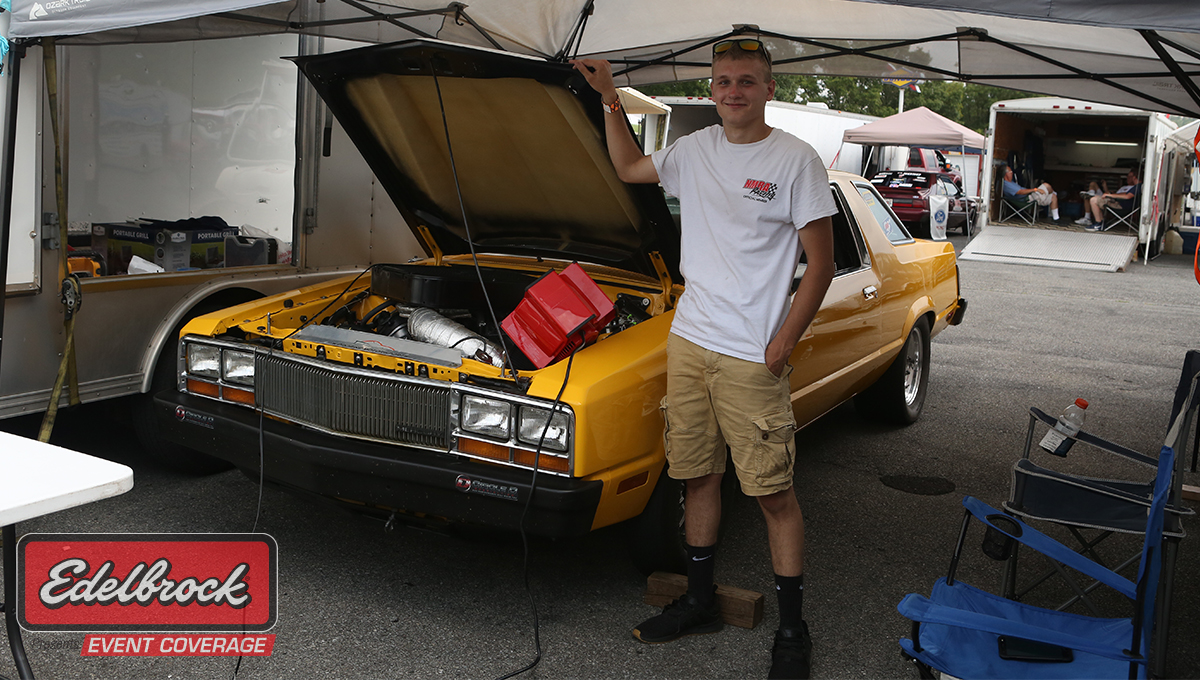 The Fogelsonger family has a quartet of NMRA class legal cars and their patriarch, Justin, has been the only one to get on track during a national event...until this weekend! Justin will be joined in Richmond Gear Factory Stock this weekend by his son, Mason, as they both will bring Coyote/C4 combinations to the 10-second eliminator. The 1978 Fairmont saw life in Factory Stock with a previous owner before Fogelsonger picked it up for his collection a few years ago. His 20-year old son Mason took possession of the Fox-body two-door sedan and quickly signed up for Factory Stock. He has already run 10.70s in the car, but he has a long way to go to catch his dad who ran 10.41 in a test hit this morning. 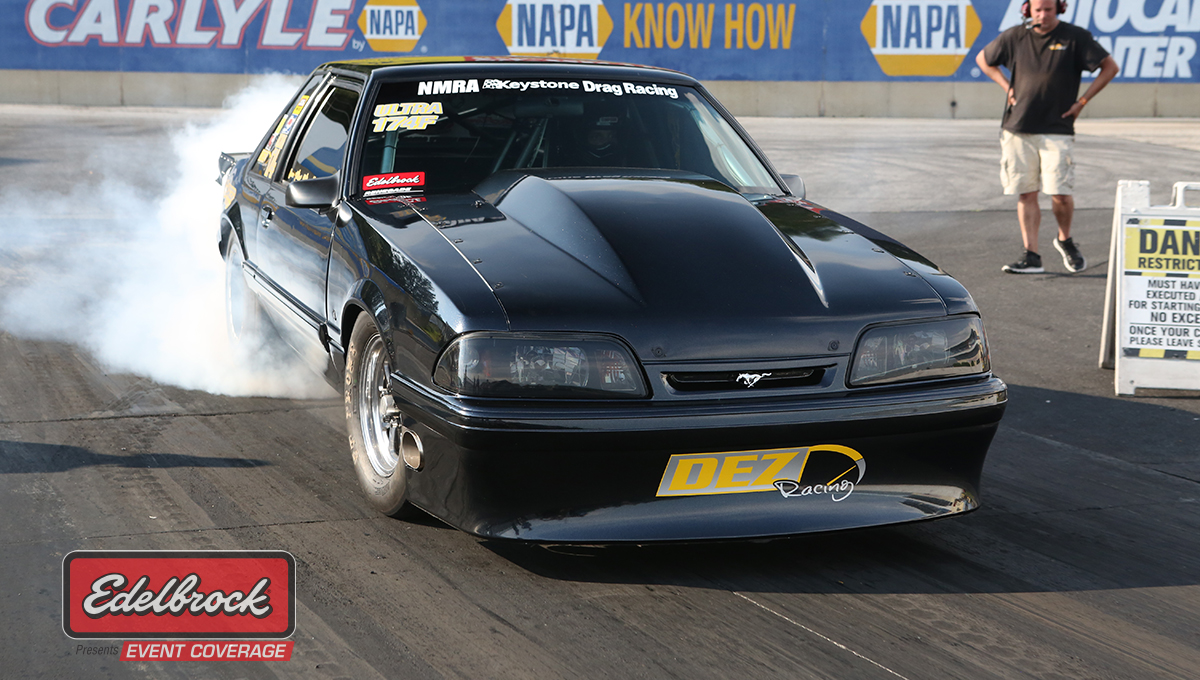 A regular in the Northeast Ultra Street scene, Dan Filippello is new to NMRA competition and is entered in Edelbrock Renegade. Dez Racing handled most of the build, including the wiring of the Holley EFI Dominator, which Mike Dezotell has been named as the crew chief. The engine package is a M1-burning 400ci small-block with Trick Flow High Port cylinder heads and a ProCharger F-1A-94. Filippello is currently second on the ladder thanks to a 4.927 at 145.74 mph performance. 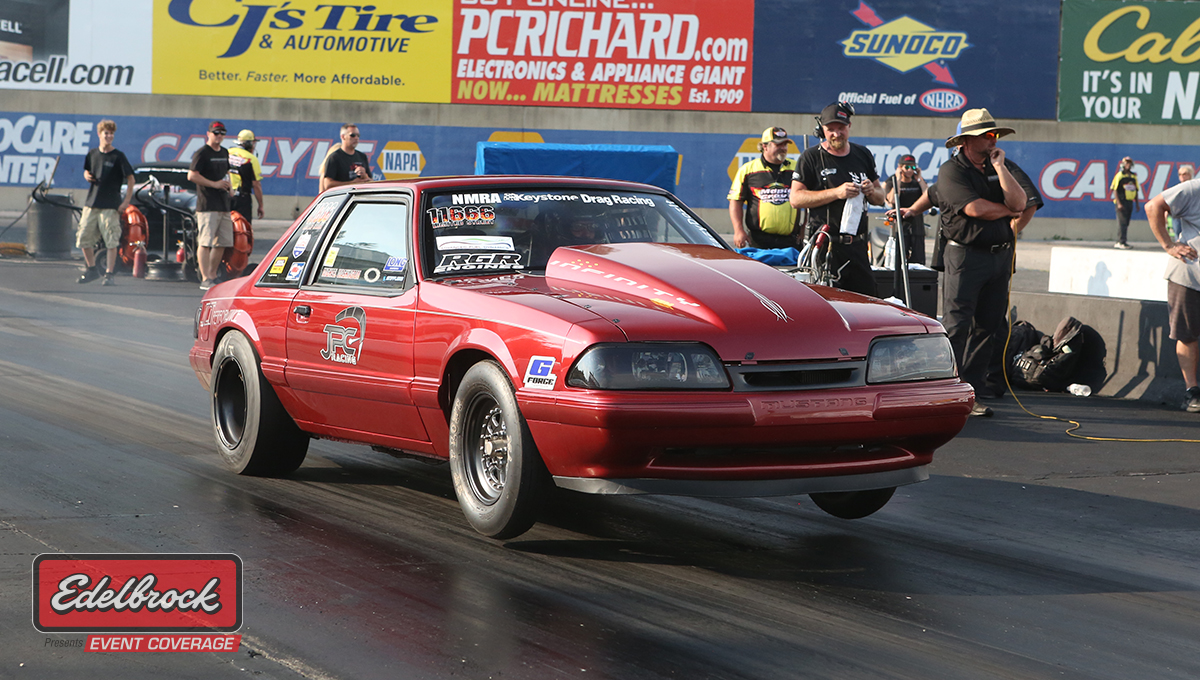 Project Pure Evil is on the property and entered in Advanced Fuel Dynamics Limited Street with the project's curator Mike Washington behind the wheel. He is qualified 8th thanks to a 9.353 at 149.60 mph in the 12-car field. Washington spun the tires out of the gate as he got a little aggressive with the clutch tune-up. He ran a 9.00 at 152 mph earlier in the day and he is hoping to grab an 8-second time slip tomorrow before qualifying concludes. This year Pure Evil uses an even bigger and badder Rich Groh Racing Coyote/Voodoo engine that carries a 339ci displacement, ported GT350 heads, Cobra Jet intake, and everything else that is needed to make it go quick. Eric Holliday tunes the engine via an AEM Infinity stand-alone engine management system.