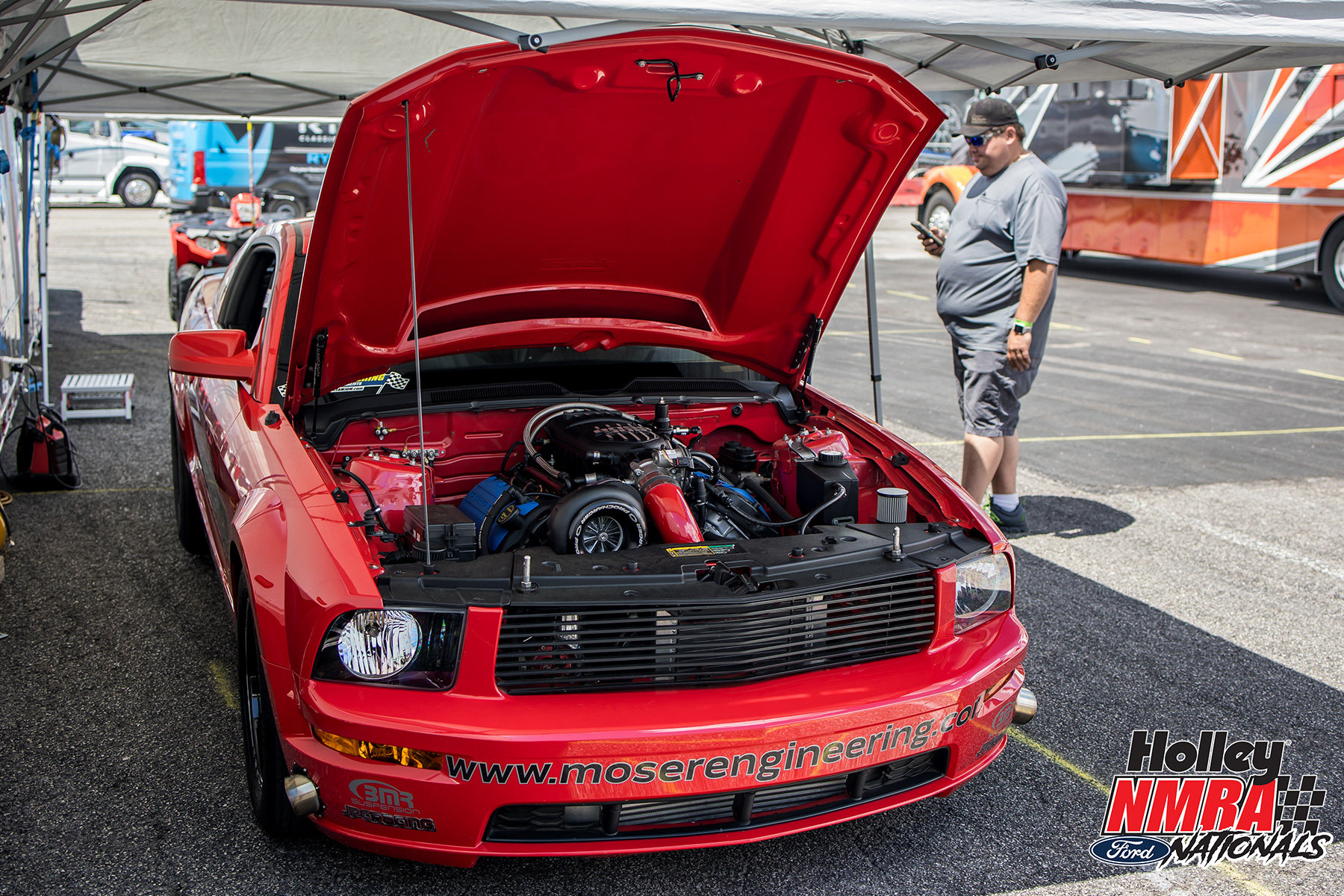 We'll be kicking things off shortly here at World Wide Technology Raceway with what is forecasted to be a great day of racing. Here's the Friday event schedule. 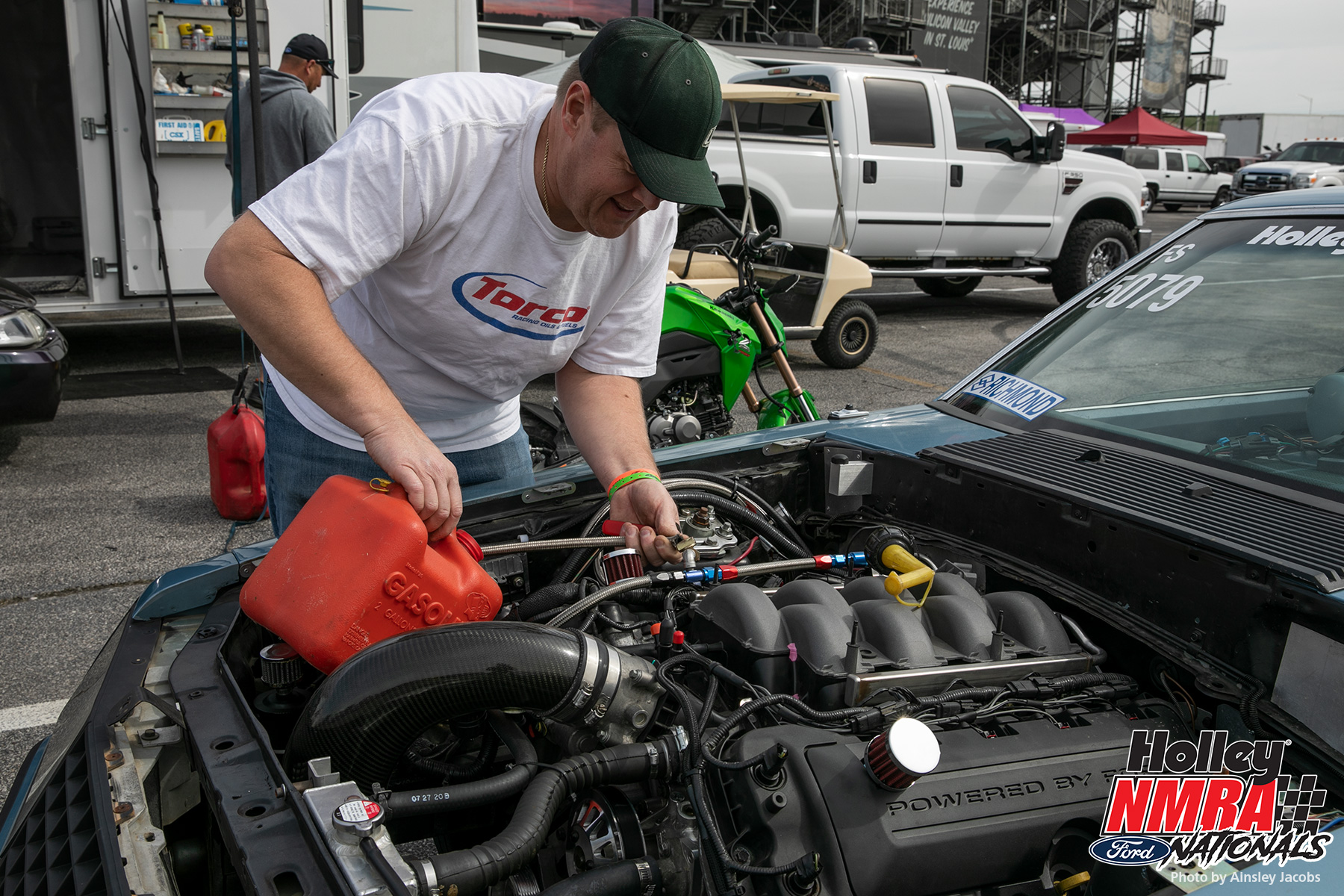 Usually, the offseason is the perfect time to make changes and get busy working, but NMRA Richmond Gear Factory Stock racer Bryan Gardner was pleased with his 79 Mustang's performance the previous season and let it sit after the final 2020 race at Bowling Green, Kentucky. He was busy working his day job instead, so he had to brush a few cobwebs off before loading his car into the trailer to make it out this weekend. This morning, he took the old fuel out so that he could pass tech, and is now looking forward to seeing if he'll pick up a few numbers given that he's been able to enjoy a weight break of 25-pounds for the fact he runs a C4 automatic transmission with his JLT cold air intake-equipped Coyote engine. 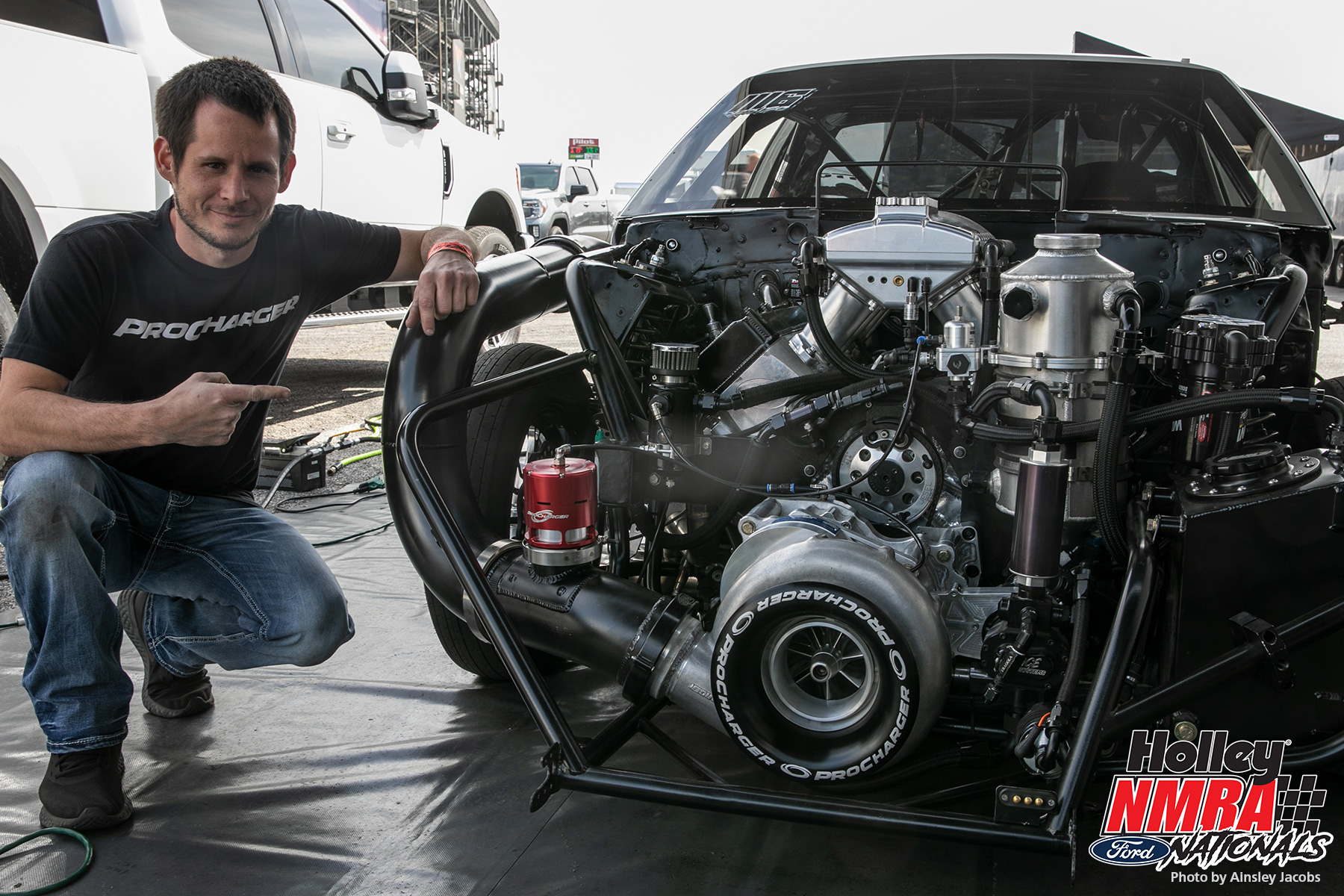 Tony Hobson has spent a lot of time testing over the past month with his ProCharged Fox body Mustang, formerly owned by Manny Buginga. The ProCharged powerplant has been performing well, but a new floater rear end from Merillat Racing and new rear shocks from Menscer Motorsports have both been put in place to help the car's suspension separate more at the hit. Pre-race testing here at World Wide Technology Raceway produced consistent 1.03-second and 1.04-second 60-foot times, meaning the driver is happy and won't be holding anything back this weekend in NMRA VP Racing Madditives Street Outlaw. 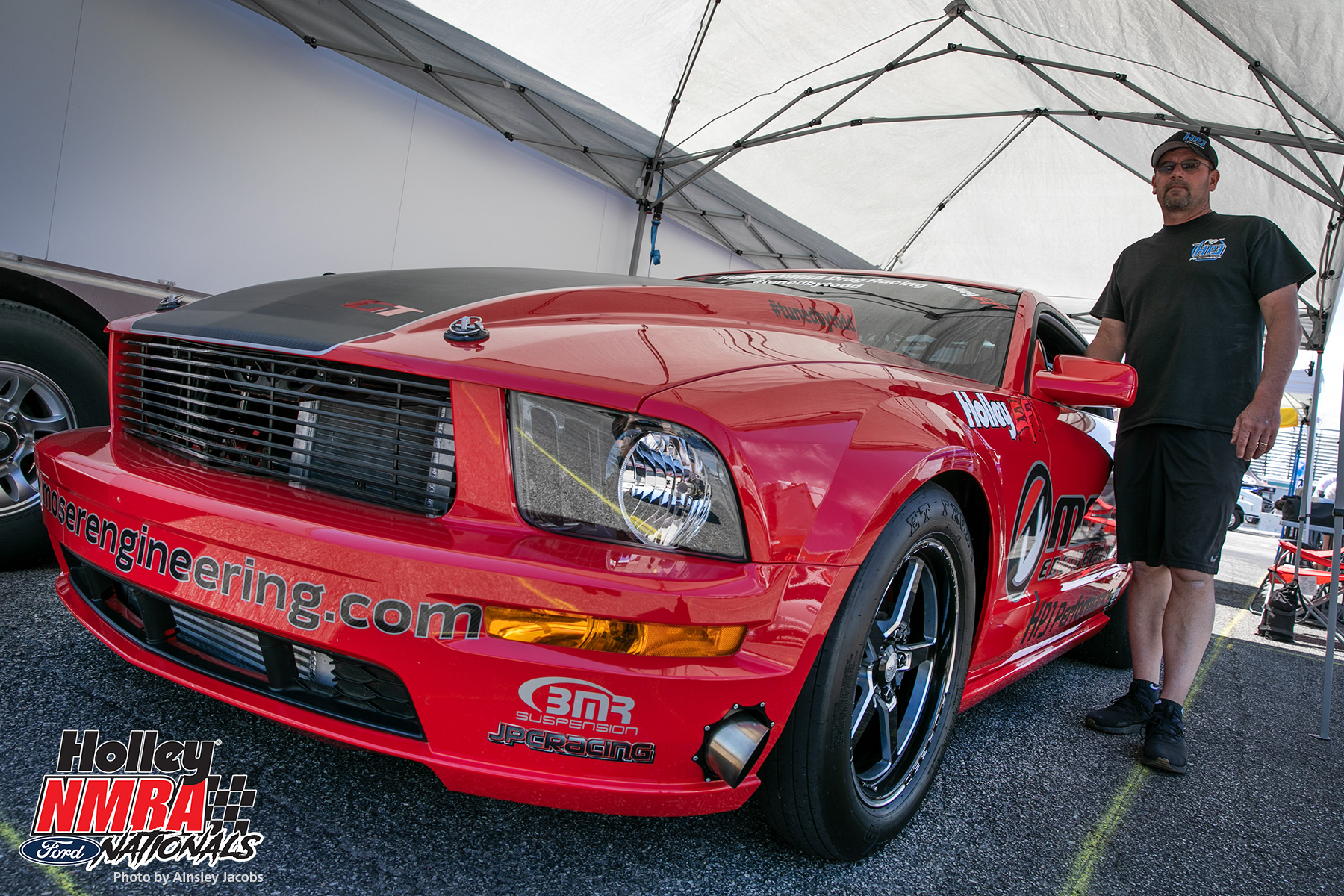 Chad Wendel was the quickest NMRA JDM Engineering Limited Street entry during Thursday's testing when he ran 8.30 at 162 mph, just a split-second of his run of 8.29 from the season opener in Florida back in March. His ProCharger supercharged and HPJ Performance-backed 07 Mustang is enjoying the good air we're having in St. Louis so far, and he's happy to be back where he wants to be. No major changes have been made for the man recently, other than slapping on a fresh new set of radial rubber and letting tuner Todd Dennis work his magic on the Holley EFI system. 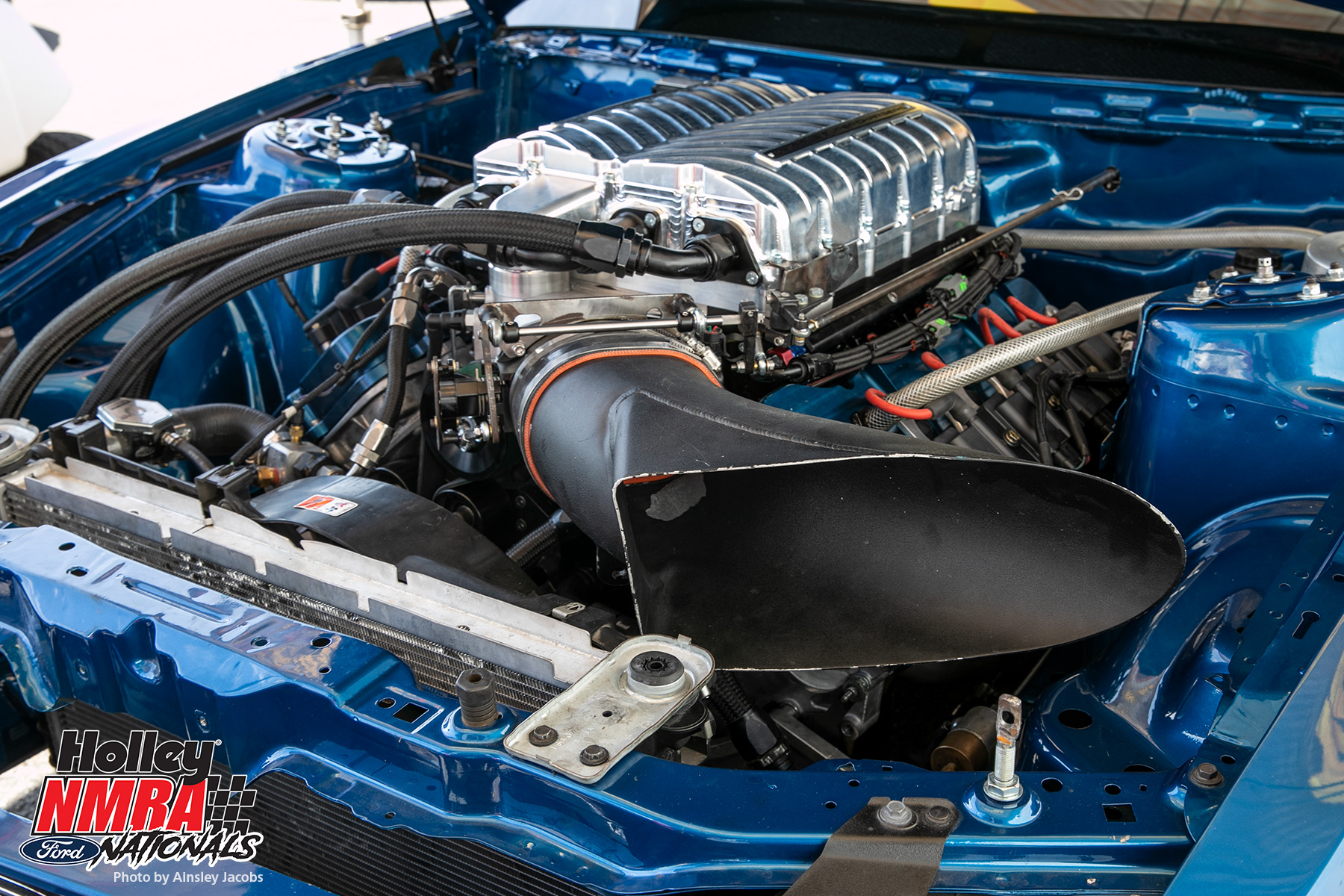 It's been a busy week for Becki and Joe Cram, and the race has barely even started yet. Holbrook Racing Engines finished up the new bullet for Becki's NMRA Edelbrock Renegade ride on Tuesday, so the couple cruised up to the shop to start thrashing on the install that same day. A quick test session was due to take place at US 131 Motorsports Park, but when Becki couldn't get off of work, Joe hopped back in to learn to make some runs again. All went well, and Becki resumed driving duties here at World Wide Technology Raceway, although something with the 3.0L Whipple blower wasn't making the car happy so they busted out the big jewelry and put the 3.8L on instead to give that a go instead. 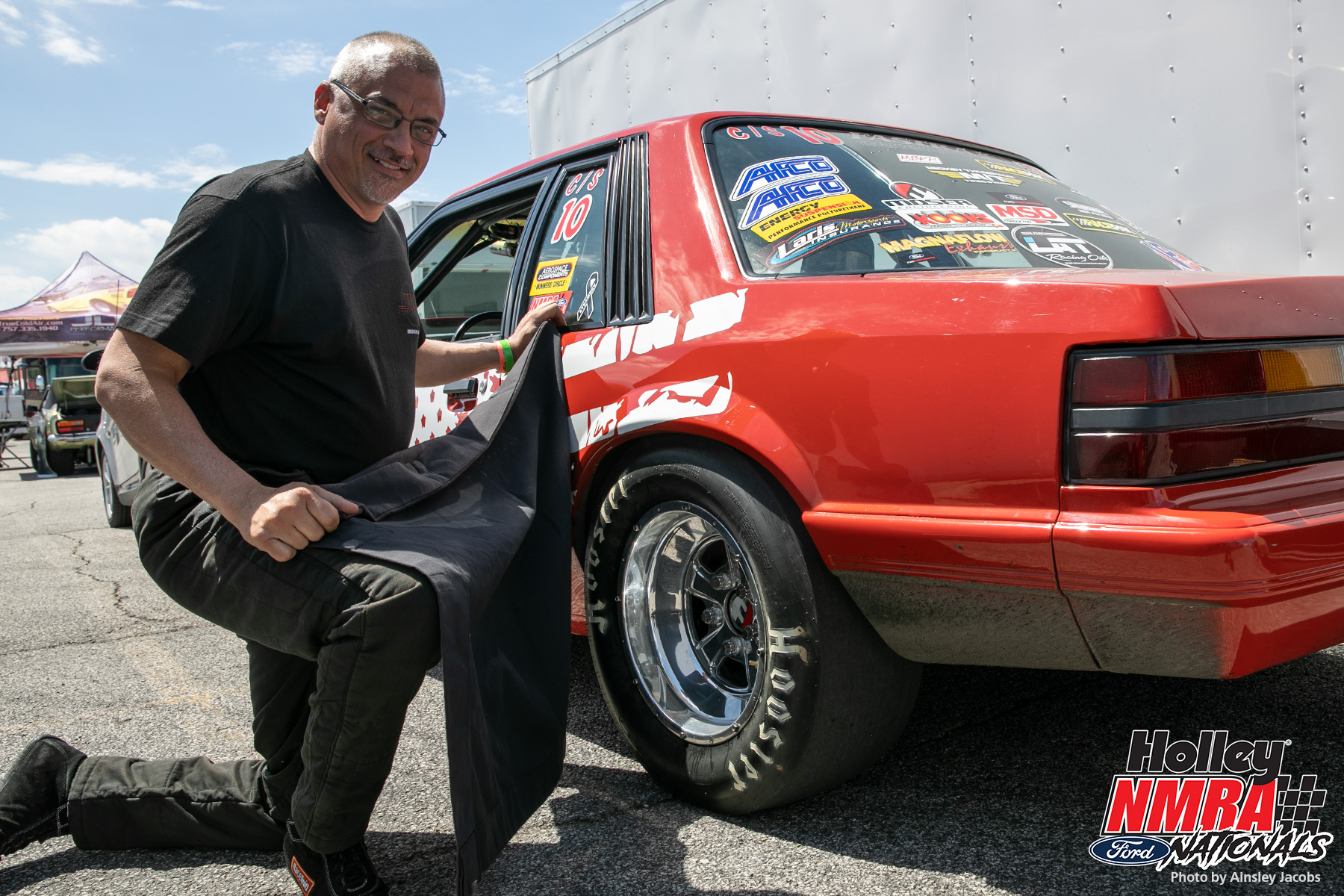 Jacob Lamb of NMRA G-Force Transmissions Coyote Stock fame is rocking a new set of 26x8.5 Hoosier tires from Florida Performance. Initial testing has shown a lot of promise, including a 9.81-second hit with one of his friends behind the wheel. That run came with a 1.43-second 60-foot time which sounds slow until it's clarified that it was clocked with the back tire instead of the front. Lamb estimates it would've been in a 1.33 or 1.34-second one had the front tire triggered the beam instead, and with a best of 1.26-seconds already in the books, it looks like he's still got plenty of room for improvement. 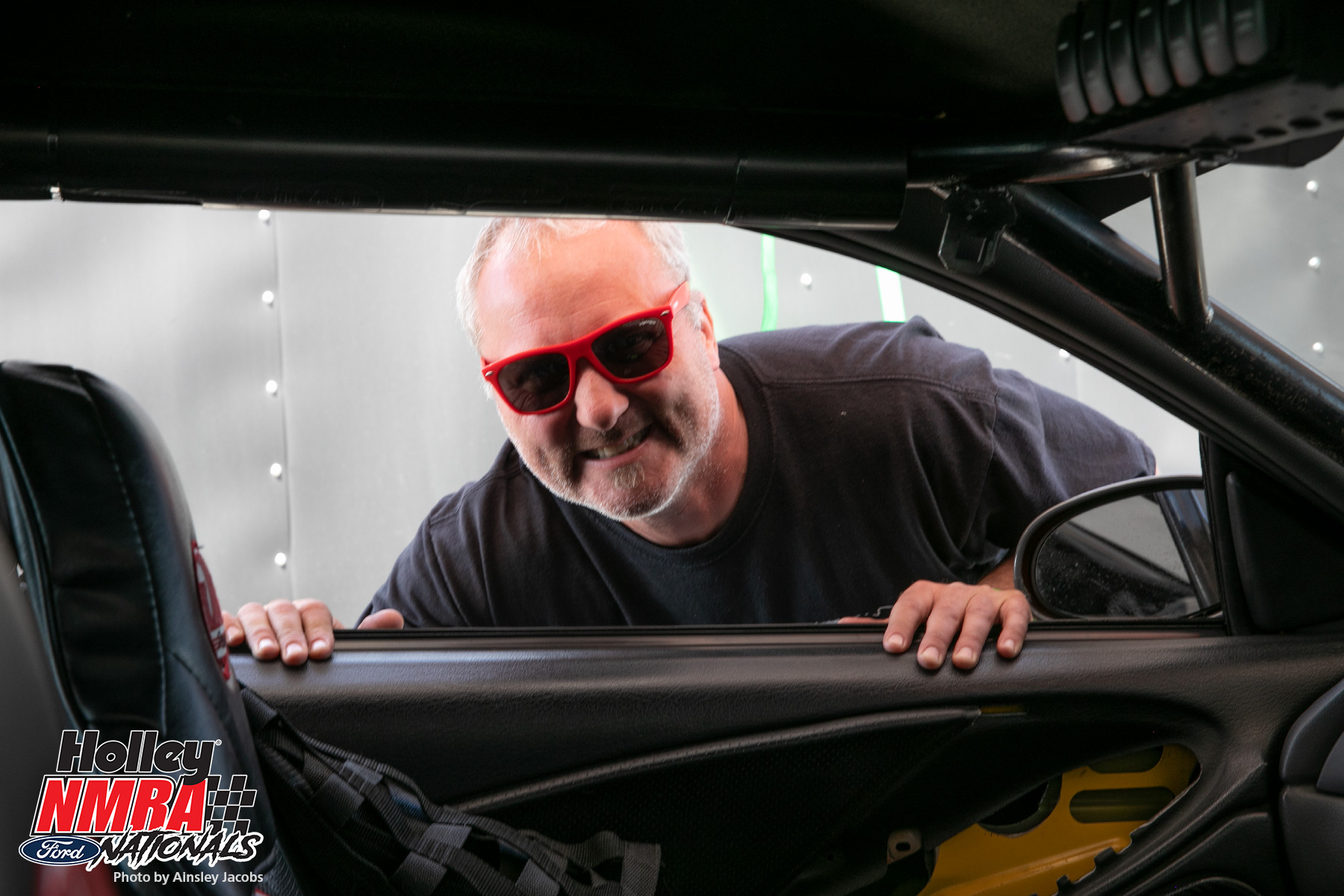 Still in the recovery process from his massive skateboard-esque wall-slide wreck at Beech Bend Raceway Park in Bowling Green, Kentucky, at the end of last season, NMRA G-Force Transmissions Coyote Stock competitor Kevin McMullin has slowly worked his way back to where he was before the wild ride as he not only lost a lot of sheet metal in the accident but also the entire front suspension. Team Z stepped in to help with replacements, but McMullin has been working his way towards getting everything dialed in again. With all new struts, control arms, brakes, and more including a new Gen 3 Coyote engine and a 100-pound weight addition it's like a whole new car. He's got four different gearsets with him this weekend alone trying to figure out what works best in what weather now, and the change he made yesterday helped him pick up a full tenth. In round one of qualifying, he clocked a new personal best of 9.779 at 136.98 mph so it looks as though he's making steady progress. 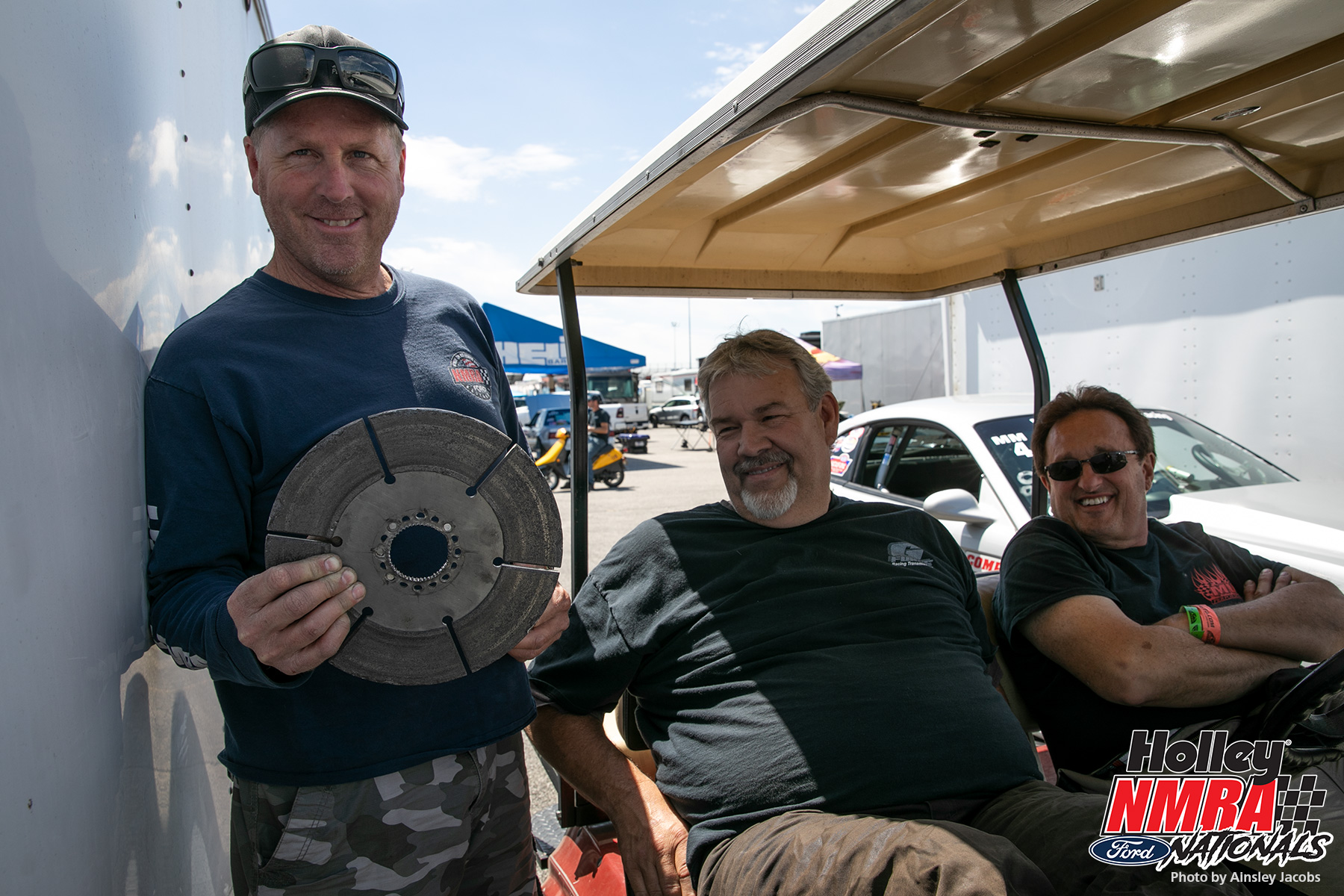 NMRA Exedy Clutch Mod Muscle pilot Adam Cox (left) had a little oops moment when he put his 99 Mustang's shifter linkage on backward and it went into fourth gear instead of third during testing on Thursday. He wound up blowing the center hub out of his clutch, but thankfully he's got good friends by his side namely Tim Matherly (center), Charlie McCulloch (right), and Darin Hendricks (not pictured). Matherly and McCulloch helped get everything removed, while Hendricks donated a clutch so that Cox could continue. 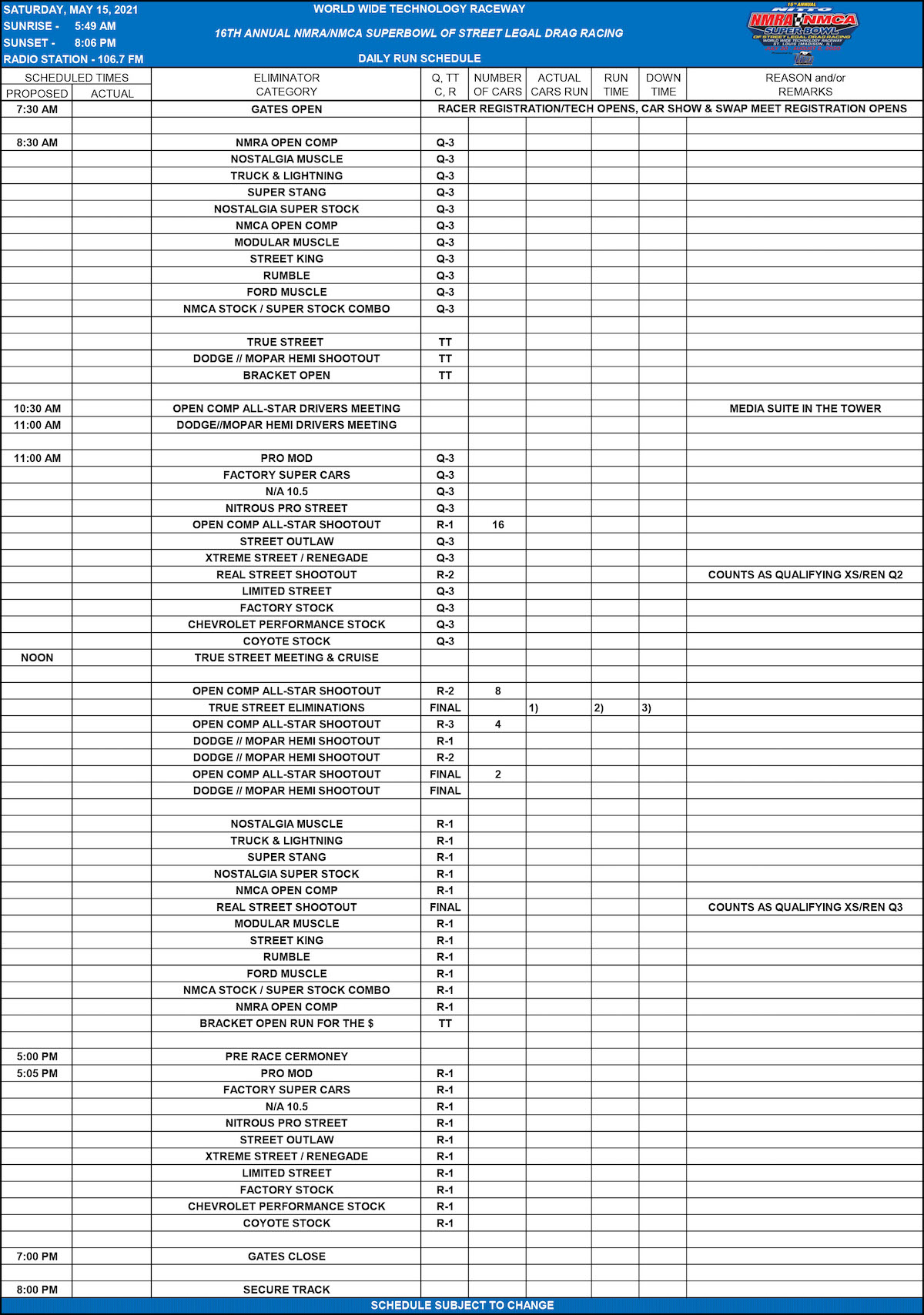