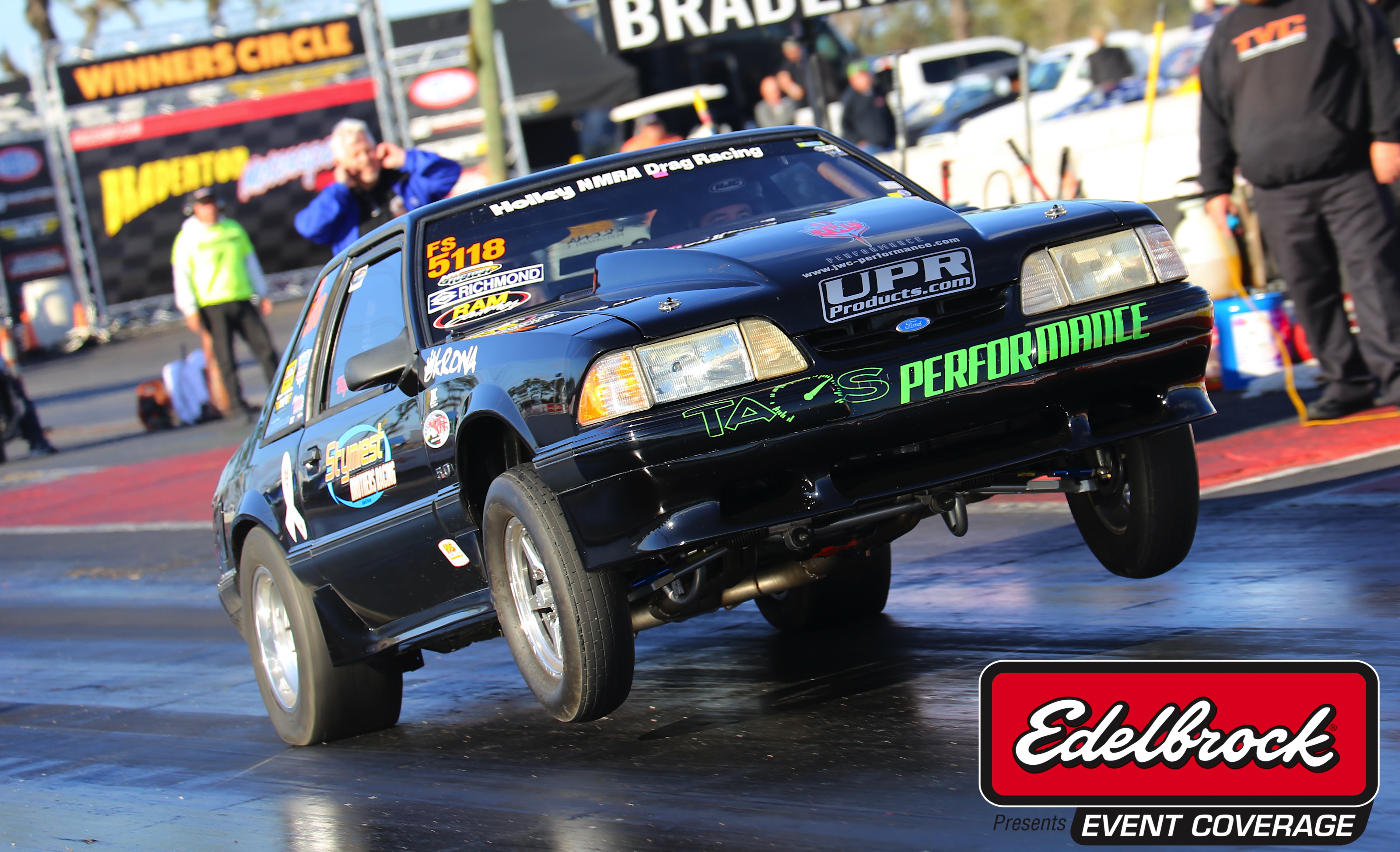 Today the action heats up at Bradenton Motorsports Park as the 26th Annual Nitto Tire NMRA Spring Break Shootout moves from testing into the first round of qualifying. The weather is great and the cars are flying on the track, which sets the stage for a great weekend of racing.

After showing his 2004 Mustang's potential in testing, Frank Paultanis made things official in the first round of qualifying by running the first 9-second pass in G-Force Racing Transmissions Coyote Stock competition. It ripped off an impressive and historic 9.96 at 132.94 mph. Backing it up this weekend would make it a record, so stay tuned for more sealed-engine excitement at the 26th Annual Nitto Tire NMRA Spring Break Shootout.

Making the NMRA debut with his 50th Anniversary Cobra Jet, David Swanson says his latest race car is a rocket ship. He also owns a 2014 Cobra Jet, but has committed his retirement to enjoying motorsports, including racing with the NMRA this season. Competing in the Watson Racing Cobra Jet Showdown, he is sneaking up on the Ford Performance-supplied calibrations at the 26th Annual Nitto Tire NMRA Spring Break Shootout, but even with the #2 safest tune he clicked off an 8.36 at 168 in testing. The Grabber Blue graphics on his CJ are a nod to the Boss 302 he had in high school. 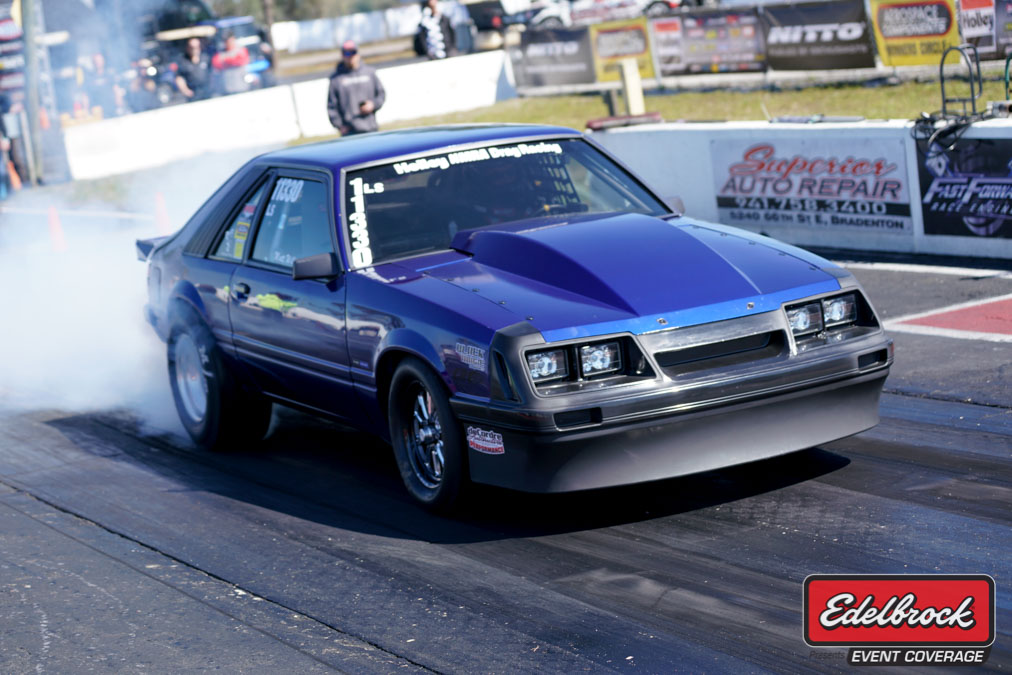 In a class dominated by power-adder-equipped cars, few of the Jdm Engineering Inc Limited Street racers have run a naturally aspirated combinations. In 2020, that small group grew by one with the addition of Matt Williams and his Coyote-powered, four-eyed Mustang.

VP Racing Madditives Street Outlaw racer John Urist was feeling pretty good after a solid performance at Lights Out. The team is finalizing the latest software in its Bosch EFI digital dash to harness even more control over the Hellion Turbo-boosted S550. Urist is hoping to run 4.20s in the good air this weekend at the 26th Annual Nitto Tire NMRA Spring Break Shootout.

With the first round of qualifying looming, ROUSH Performance Super Stang racer Marvin Knack thrashed in the pits to get ready. He sought to solve a suspension issue that created an unsettling popping noise downtrack on a test hit at the 26th Annual Nitto Tire NMRA Spring Break Shootout.

There is more than fresh paint on Junior McKenzie's ARP Open Comp racer. He dropped 300 pounds with a fiberglass hatch and doors, and shored up the rear suspension with a UPR Products anti-roll bar and QA1 shocks. With those changes and new beadlock wheels, the car responded by shaving a couple tenths off its best ET with a 9.72 at 135 mph in testing at the 26th Annual Nitto Tire NMRA Spring Break Shootout.

Looking for something different this weekend at the 26th Annual Nitto Tire NMRA Spring Break Shootout Bill Lee is racing this 1987 Lincoln Town Car hearse (owned by Roy and Shawna Winters), dubbed the OverTaker, in QA1 True Street. Powered by a 302 backed by an AOD with an FTI converter, this 235-inch-long, 4,800 pound machine has its sights set on the 15-second category. It is still ready in to carry a coffin, however, as all the tie-down hardware and curtains are still in back.

It is cool this morning at the 26th Annual Nitto Tire NMRA Spring Break Shootout, but defending ARP Open Comp champ Dennis Corn's dad, Bob, knows how to stay warm in style. The pair enjoys racing together and are just blowing the rust off to start this season's campaign.

Since we last saw Heinz Stock in Bowling Green, the Toronto, Canada, racer significantly upgraded his 2019 Mustang GT. It ran as quick 9.1 seconds with a stock engine and a Hellion Sleeper turbo system. Now it sports a built Gen 3 Coyote engine and a 10R80 trans fortified with McLeod Racing clutches. He also added a Cortex cage and more safety equipment with the goal of being the quickest, heaviest S550 street car around. With up to 1,209 horsepower under the hood, this Green Machine is one to watch at the 26th Annual Nitto Tire NMRA Spring Break Shootout. 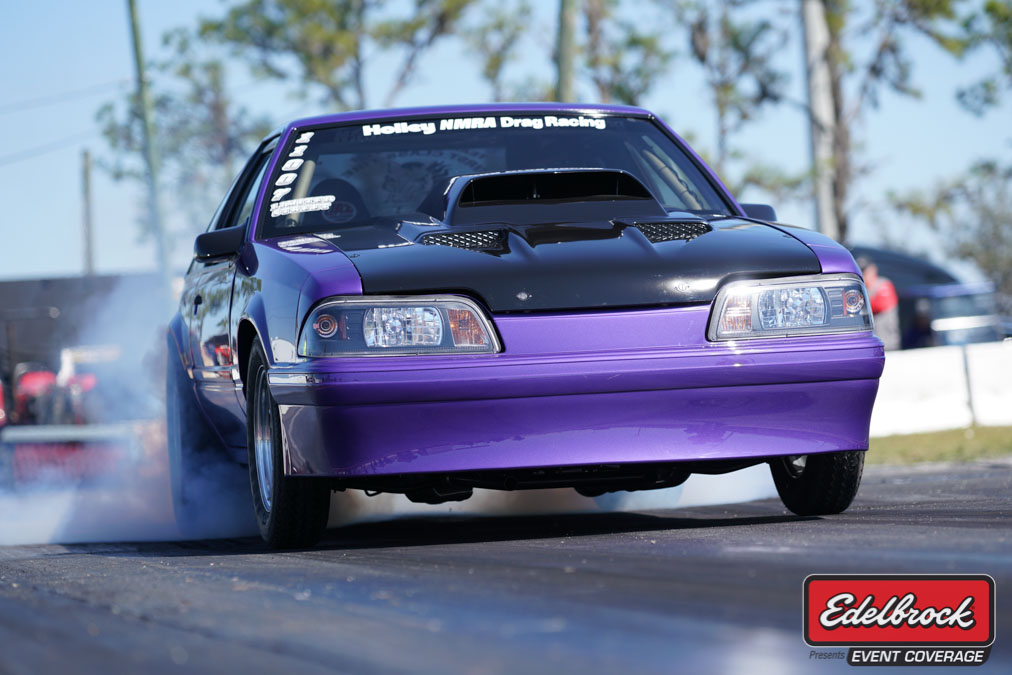 Limited Street racer Kevin McCotter put his LX Mustang on a diet during the off season, swapping out the factory sheetmetal doors and hatch for fiberglass pieces and dropping a couple hundred pounds with a few other changes. He then entrusted True Street champion Randy Thomas and his Thomas Collision shop to repaint the formerly white LX in whatever color he felt like, and McCotter loves the new purple hue. McCotter is also loving the fact that his naturally aspirated, Windsor small-block Ford engine finally pushed the car into the high 8s today. 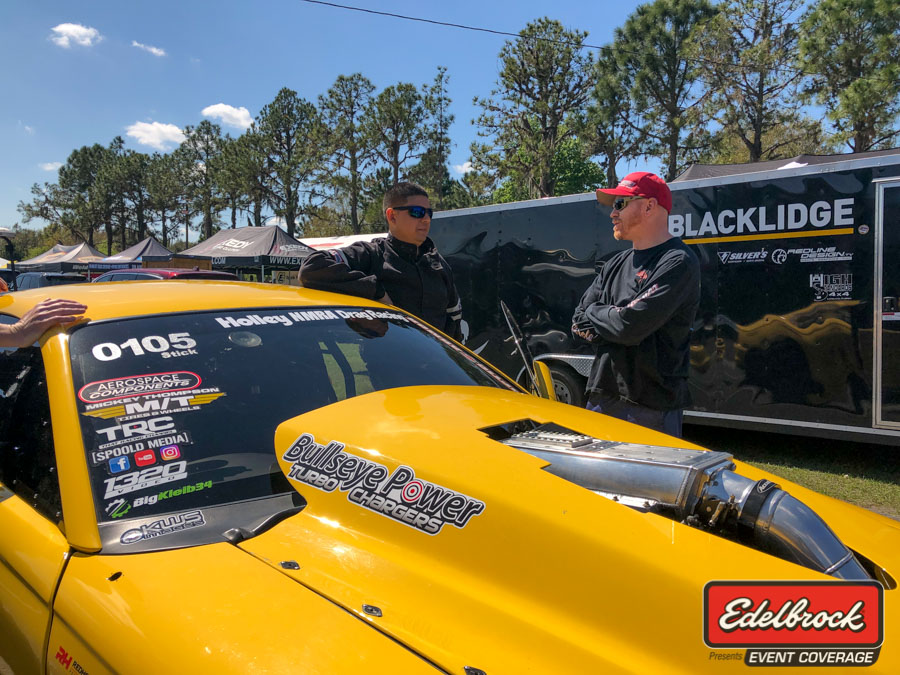 Multi-class race winner Yandro Ulloa (at left) is here with his Minion Mustang, and was chatting it up with fellow twin-turbo racer Justin Jordan (at right), and both racers will be competing in the Mickey Thompson Tires Cobra/GT500 shootout this weekend. 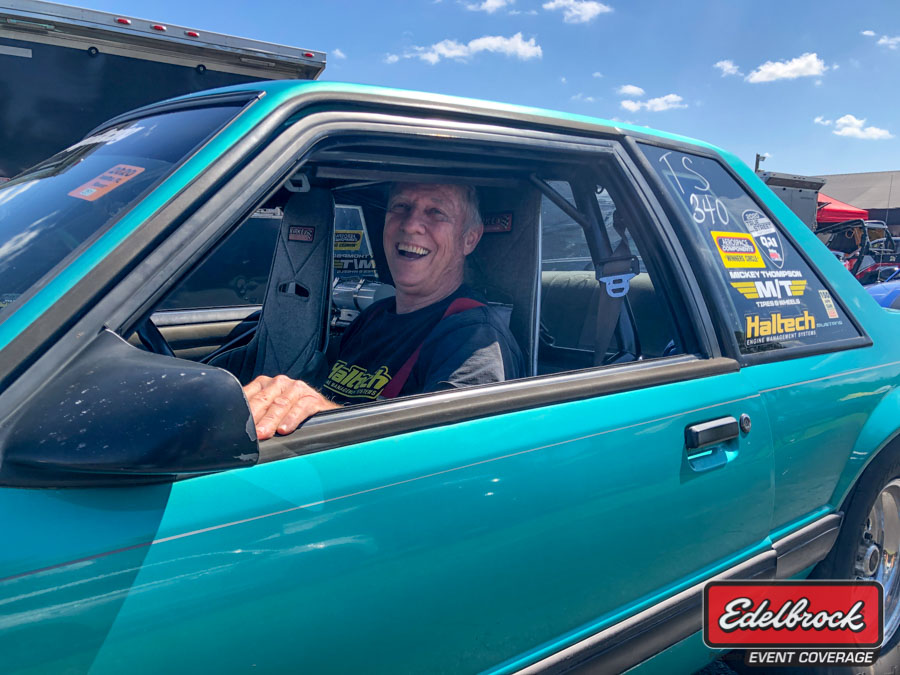 Frequent QA1 True Street winner Randy Seward is here with his familiar Calypso Green, twin-turbo coupe to hopefully click off more low-8-second timeslips and get into the JLT Performance Spring Break Shootout as he has done many times before. 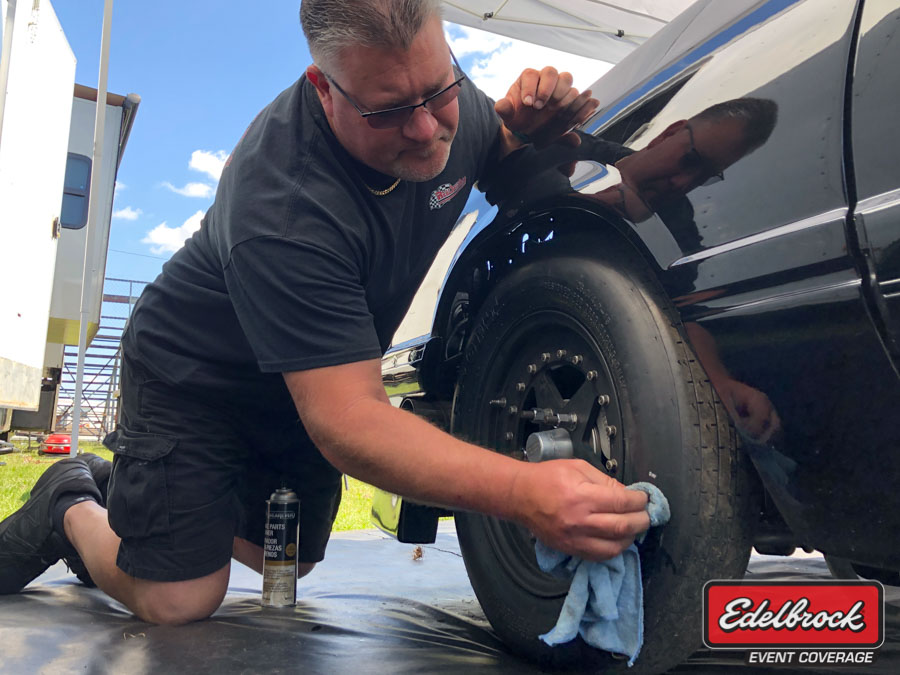 Operating out of his Clearwater, Florida-based Real Speed Racing shop, local Ultra Street racer Walter Drakeford is competing this weekend in the Edelbrock Renegade category with his ProCharged Mustang, as the classes crossover well. He had some new Mickey Thompson front-runners put on after a recent race, but he's not about the white letters. 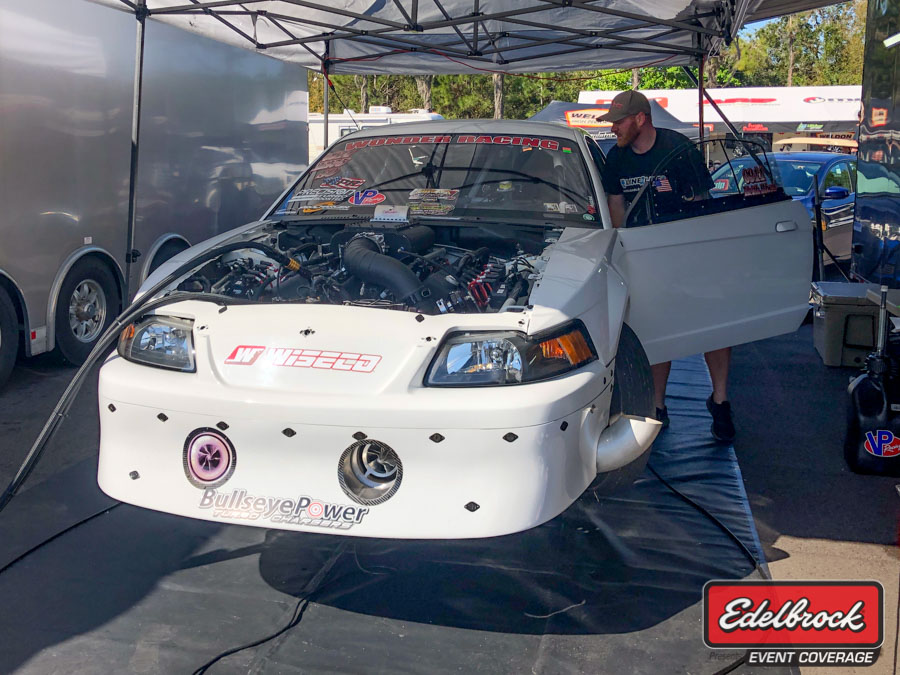 Wonder Racing's Keith Rhea made good on his promise to fab up a single-turbo system for his Terminator Cobra so he could go VP Racing Madditives Street Outlaw racing with the NMRA. The 5.4-liter modular powerplant, boosted by a Bullseye turbocharger, propelled the Mustang to a 4.52 eighth-mile time in the second round of qualifying. 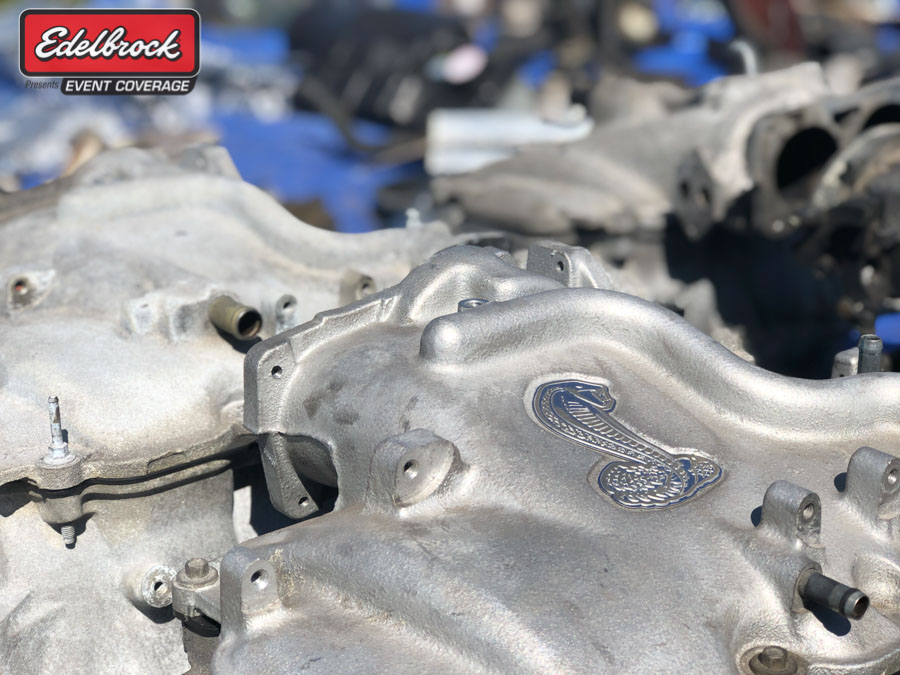 The swap meet is already chock full of deals and steals here at Bradenton Motorsports Park, and we'll likely see even more vendors pour in tomorrow. Whether you need a 4V Cobra intake like this, or a whole Mustang, we've got you covered. 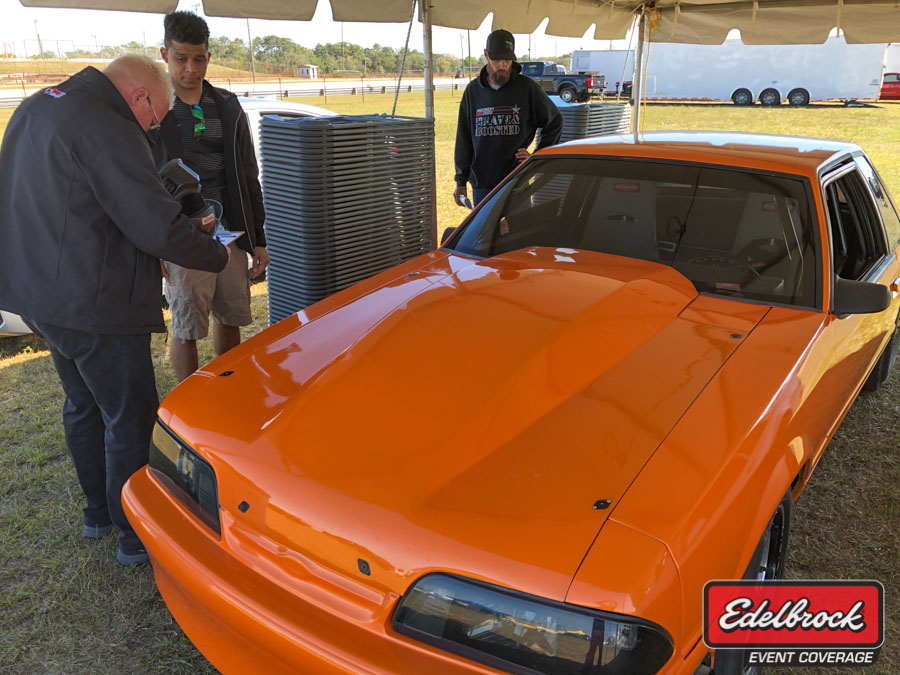 Harrison Cumbie of Plant City, Florida, is competing in QA1 True Street this weekend with his 87 Mustang LX. It packs a turbocharged Coyote engine running on pump gas with a little bit of methanol injection, and Cumbie rows the gears of a face-plated TREMEC T56 Magnum transmission. We met up with him while he was passing through the tech line. 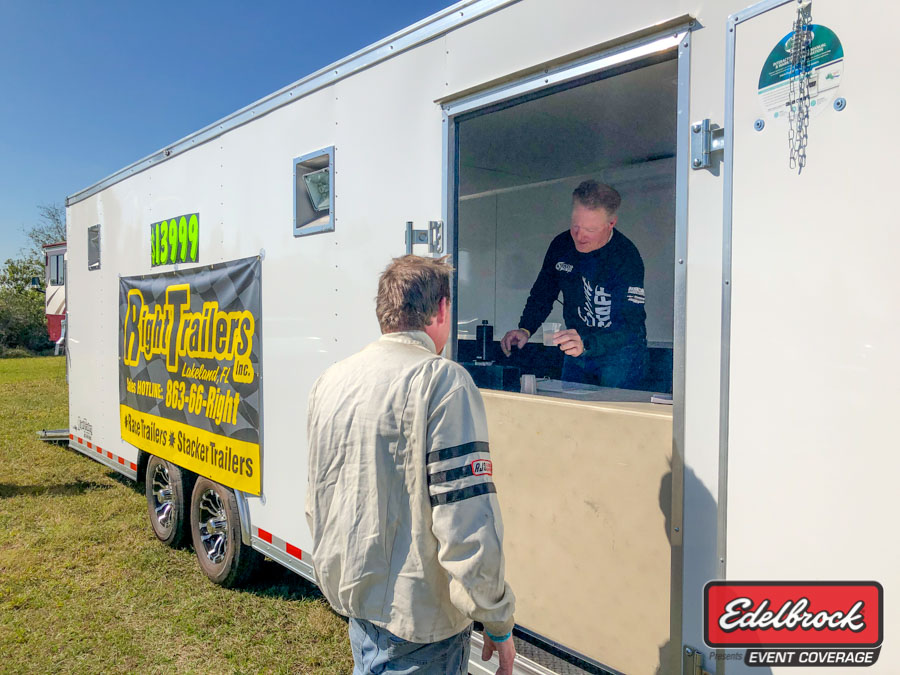 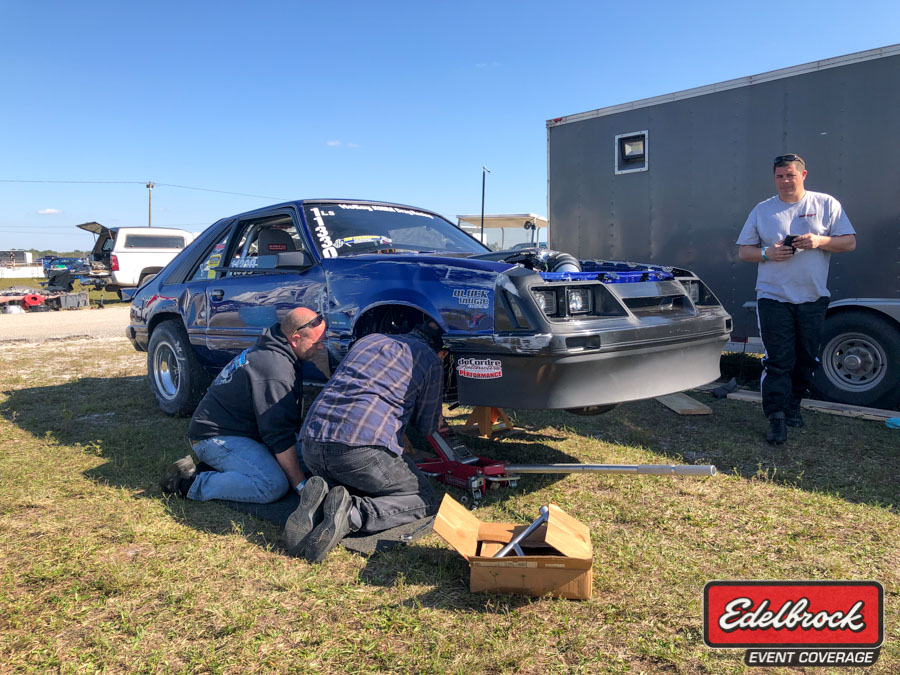 Limited Street racer Matt Williams had a pretty big wheelie during round one of qualifying, and the car seemed to drift out of the groove. It eventually tried to flip itself over, but balanced on two wheels before Williams regained some control before impacting the right-hand side wall. Williams said he was a little sore, but otherwise alright as his team worked on the Fox-Body Mustang and assessed the damage. 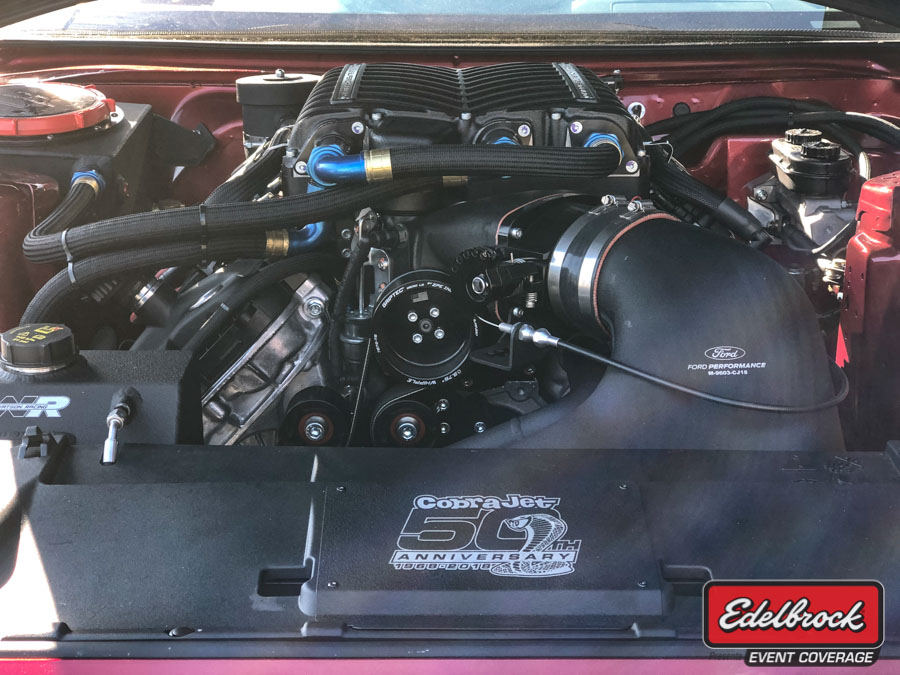 In just his third race with his new Cobra Jet Mustang, Jim Betz is here competing in the Ford Performance Cobra Jet Showdown presented by Watson Racing. During Thursday's test session, Betz drove a 300-plus-foot wheelie, which looked awesome, but was not ultimately a good run. 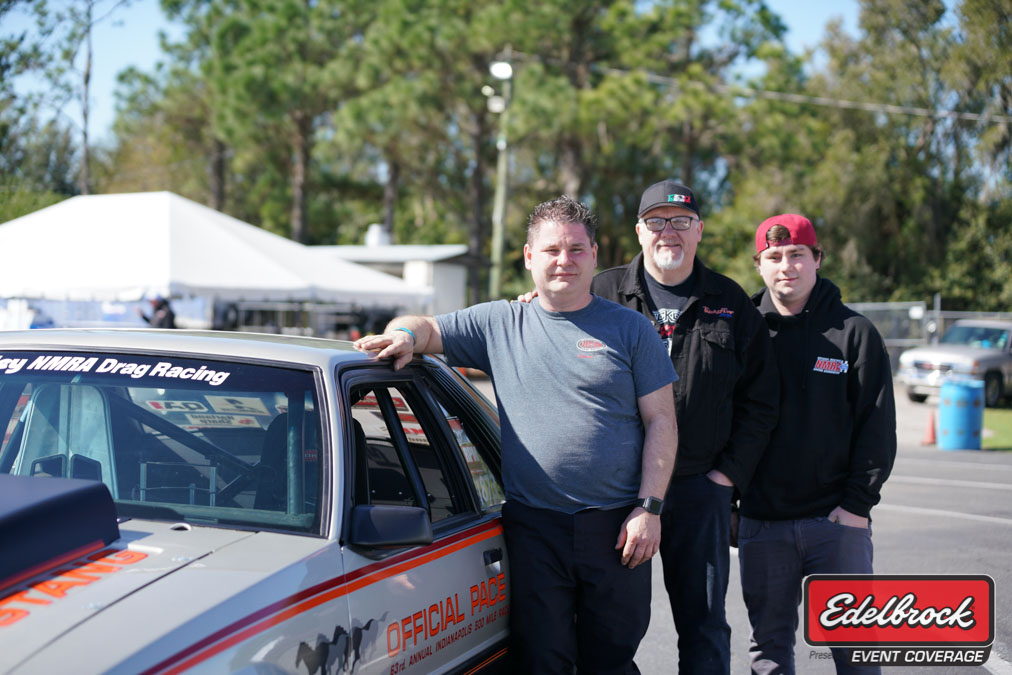 Hailing from Ontario, Canada, Scott Foster hasn't raced in a Ford event since the World Ford Challenge days of yesteryear, but he's back for 2020 with the NMRA and here at the NMRA Spring Break Shoot Out to get his license runs so he can enter the JDM+Engineering+Inc.Limited Street category with his 1979 Mustang Pace Car. It packs a 351 Windsor engine with a single nitrous plate on it for power, and makes around 800 horses on the sauce.

The 26th Annual Nitto Tire NMRA Spring Break Shootout might be the season opener, but it's never to early to get hyped for the 22nd Annual Nitto Tire NMRA World Finals Featuring the Holley Intergalactic Ford Festival. Just ask the alien on hand helping the Total Venue Concepts crew prep the surface at Bradenton Motorsports Park.

Here's the Saturday schedule for the NMRA Spring Break Shoot Out at Bradenton Motorsports Park. 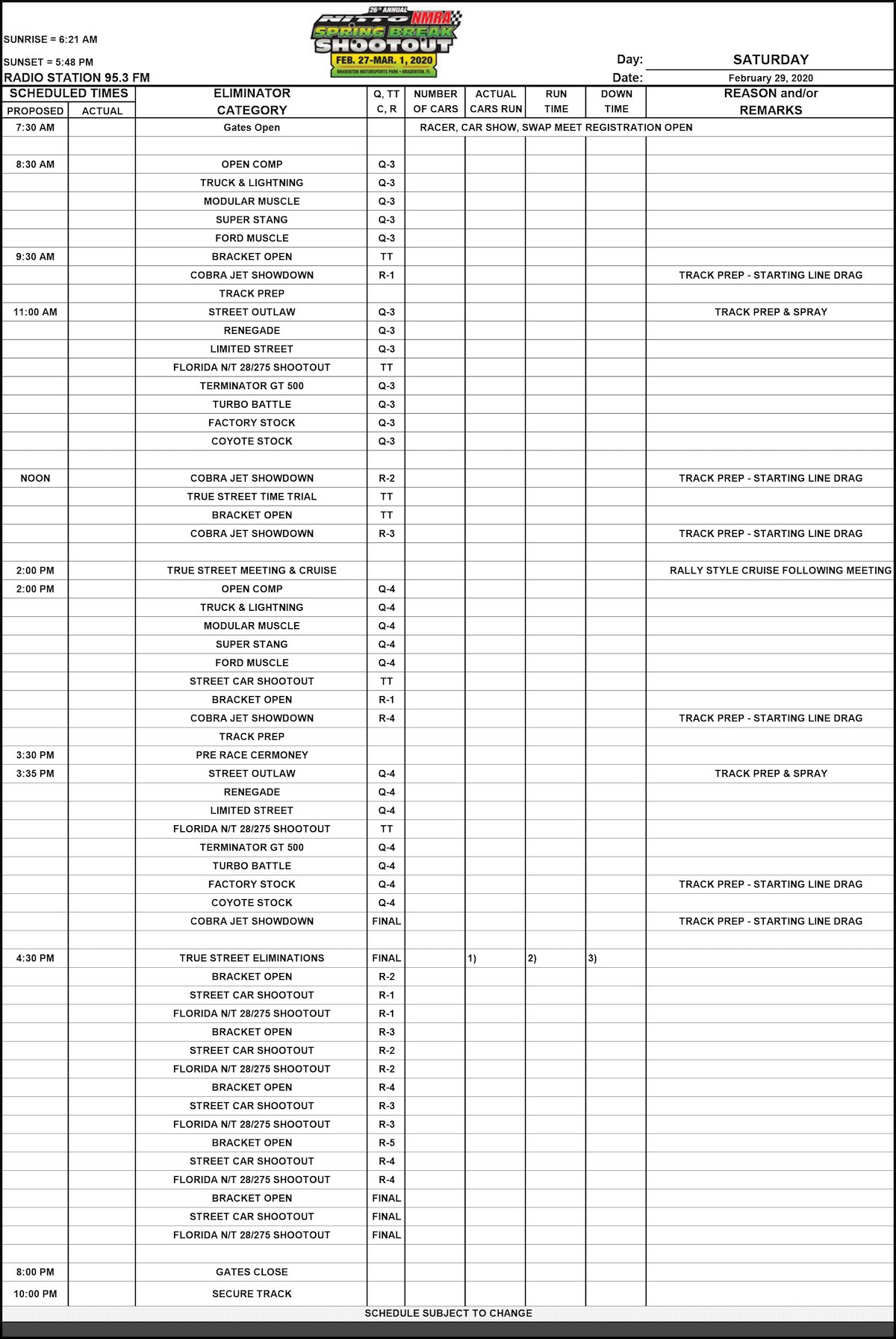