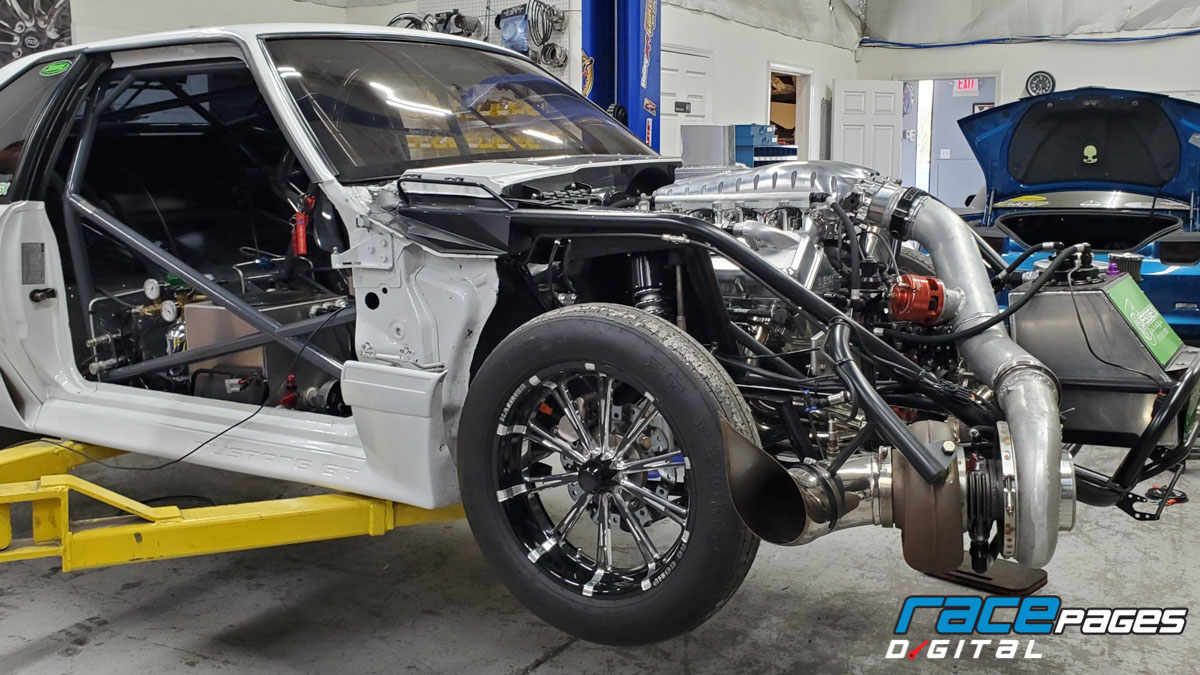 You gotta pay to play. When NMRA VP Racing Fuels Street Outlaw/X275 hot shot Alan Felts decided he wanted to be at the front of the pack, he went all in with an absolutely massive overhaul of his 91 Ford Mustang. It's gonna be fast. How fast Real fast, proclaimed Felts of the major upgrades that were done by multi-time NMCA champion, Jessie Coulter at Jessie's Garage in Bowling Green, Kentucky. Always a strong contender in the class, Felts wanted more and made it happen in a big way when he started the ball rolling in late November of 2019. We cut the floor out of the car, completely removed the guts, and only reused the body itself, noted Felts of how he started with a completely new 25.2 SFI chassis built from the ground up on the jig table. Everything was powder coated and we put the body back on and the factory floor pans back in as required by the class. Knowing he'd be flying fast, safety was a top concern and extra bars were added accordingly, along with a two-bottle FireAde system from Mag's Fab Works and Jason Digby. Next, Coulter worked with Hammer Concepts and Designs to fabricate an all-new rearend housing that's nothing short of a work of art and clear coated it to show off the beautiful welds underneath. This is one of the first that's made like this with adjustable brackets that should accommodate all different types of track prep, noted Felts of his car, which sits as low to the ground as possible and makes use of a Pro Mod-style rear suspension system from Precision Racing Suspension.

Similarly, a completely new engine was commissioned and installed for the baby Pro Mod Mustang. Working with Energy Manufacturing, a complete billet upper intake, heads, etc. was acquired for Jeff Burns Racing Engines to assemble into the killer 400ci-based small-block Ford finished product. All new Earl's UltraPro series hose ends and fittings were used, of course, to ensure safety and durability. Upping the ante even further, Felts made the choice to convert his car over to run on alcohol for an added boost of power over the already potent single turbo setup. Ironically, the Forced Inductions turbo itself is one of the few things that hasn't been changed as Felts wanted to wait out the Rona Offseason in case some updated technology was released before he got back to racing. We didn't buy one of the cheated up units and will see what it does with what we've got now and then go from there, he laughed. Although Felts is also staying the course with his Proformance Racing Transmissions unit, he had it freshened up by Dave Klaput to go with his ProTorque EV1 non-lockup converter. Coulter also rewired the entire Holley EFI-controlled Mustang, and integrated MSD's new PRO 600 CDI eight-channel capacitive-discharge ignition and Holley CANBus EGT kit. Inside, carbon fiber has been integrated to save as much weight as possible. We've never been at weight and will finally be at the minimum of 3,200 pounds, shared Felts, who added carbon wheel tubs and carbon panels around the double frame rails. Custom-made titanium gas and brake pedals, as well as a titanium steering column and a titanium parachute handle that deploys the custom-made twin Stroud Safety chutes, further complement the high-end look.