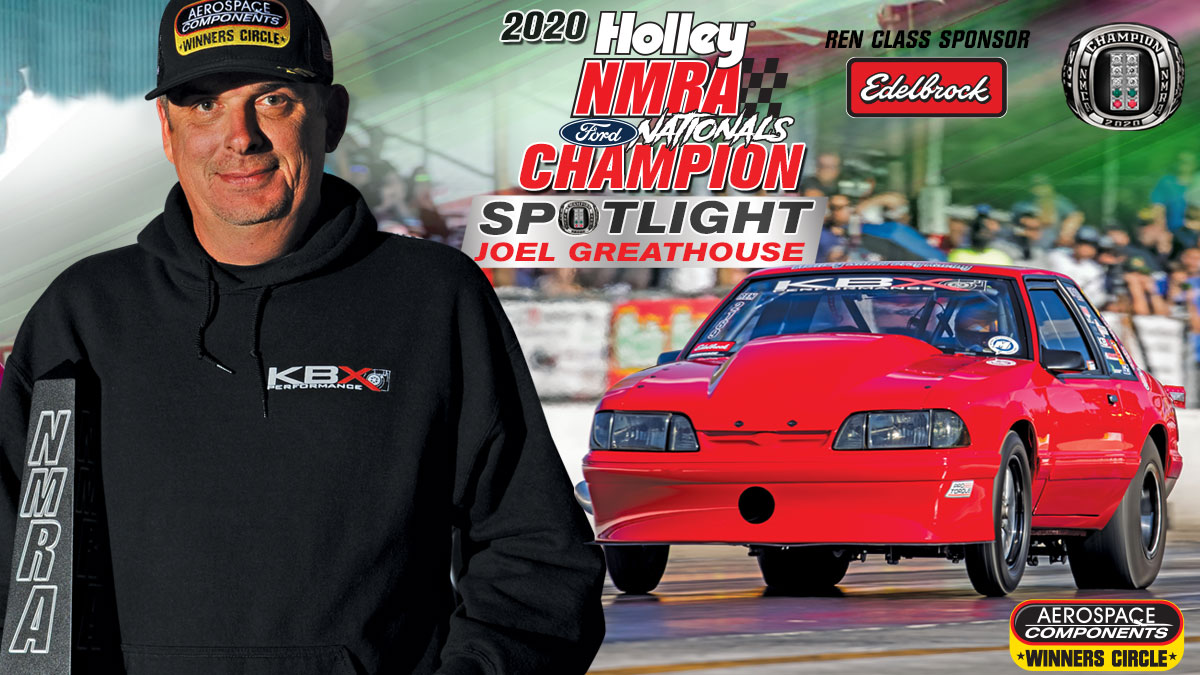 By Mary Lendzion Joel Greathouse has accomplished a lot in his years of racing. He is competitive in any car he is in, he is competitive in any category he is in, and he is talented, tenacious, resolute, and relentless. The Kentuckian was committed to capturing a championship in NMRA Edelbrock Renegade this year, and was willing to work hard incredibly hard for it. He and his team, including crew chief and tuner Justin McChesney of KBX Performance and car chief Ben Thomas, worked with Jon Bennett of Bennett Racing Engines to develop a 311 cubic-inch 8.2 deck alcohol-sipping engine, paired it with a Forced Inductions 76mm turbocharger and then hit the road for the first event of the season, the 26th Annual Nitto NMRA Spring Break Shootout, which was Feb. 27-March 1 at Bradenton Motorsports Park in Florida. There, Greathouse qualified in the second spot with a 4.65 and finished as the runner-up after having to pedal to settle his car. He then qualified in the fourth spot with a 4.73 and exited in the third round of eliminations with a 4.87 at the 12th Annual Scoggin-Dickey Parts Center NMRA/NMCA All-Star Nationals, in June at Atlanta Dragway. He qualified in the second spot again, this time with a 4.70, and arrived at the always-inviting Aerospace Components Winner's Circle with a 4.69 his quickest pass of the weekend at the Nitto Tire NMRA/NMCA Super Bowl presented by HPJ Performance in early August at World Wide Technology Raceway in Madison, Illinois.

Nearing the end of the season, Greathouse qualified in the ninth spot with a 4.72 and exited in the second round of eliminations with a 4.82 at the Arrington Performance NMRA/NMCA All-American Nationals presented by Force Engineering in late August at U.S. 131 Motorsports Park in Martin, Michigan. Upon returning home from that event, he and his team pulled his engine from the engine bay, delivered it to Jon Bennett of Bennett Racing Engines, who enhanced it to 363 cubic-inches. Greathouse was focused, and quite formidable, when he then led qualifying with a 4.58, won with a 4.60, set records with a personal best of 4.58 and a 153.06 mph and was crowned the 2020 NMRA Edelbrock Renegade champion at the final NMRA event of the season, the NMRA All-Ford World Finals featuring the Holley Intergalactic Ford Festival, in late September at Beech Bend Raceway in Kentucky. Making the weekend even more momentous were the many family members and friends who were there to support him.