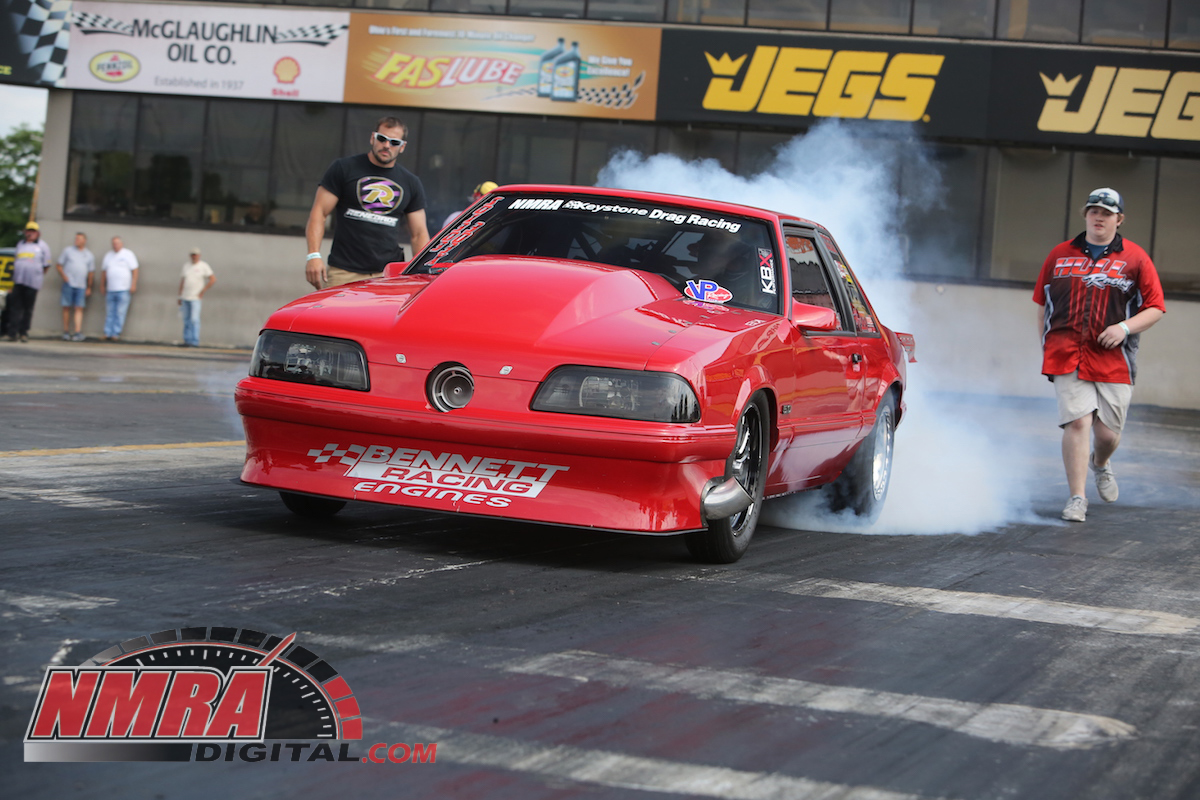 Despite a forecast of high heat and humidity, drivers from across the country dove into competition at the 13th Annual NMRA Ford Super Nationals at National Trail Raceway in Hebron, Ohio, June 9-12, 2016. The spectacle marked a return to the Buckeye state track after a several year hiatus, and anticipation was high, as it's traditionally one of the largest all-Ford events in the country, and the Aerospace Components Winner's Circle awaited. In VP Racing Fuels Street Outlaw, Vinny Palazzolo drove his Mustang to a 4.59 and 165 mph to take the top qualified spot, but it was Charles Hull and Ronnie Diaz who met in the final, with Hull picking up the win by running a 4.88 at 155 mph in his Mustang powered by a Bennett Racing Engines-built 400 cubic-inch small-block Ford and a 98mm Precision turbo, while Diaz lifted to a 5.76 at 152 mph. In Edelbrock Renegade, Aaron Bates blasted to a 7.69 and 181 mph in his Mustang to take his place at the top of the ladder, but the event win belonged to Dez Racing teammate Chuck Bartholme, who recored a 7.76 at 175 mph in his Mustang powered by a Vortech-fronted Steve LaPointe-built 370 cubic-inch engine against Val Clements, who had had run strong all weekend but came into trouble in the final round and limped down track. The undefeated Teddy Weaver was 9.76 and 137 mph at the stripe to land the lead qualified spot in G-Force Racing Transmissions Pure Street, and he kept the momentum to oust Derek Downs in the final after a 9.72 at 137 mph to 10.06 at 131 mph match-up. In ProCharger Coyote Modified, Joe Guertin sailed to an 8.04 and 170 mph in his Mustang for the top qualified spot, and hung tough through the final, where he was set to face Tommy Annunziata. Due to a timing system malfunction, the final round had to be re-run, but Annunziata was unable to make the round call. Guertin earned the event win, uncontested, with an 8.10 at 169 mph.

High-winding and high wheelies are the norm in American Racing Headers Factory Stock, and this weekend was no different. James Meredith, who's on a roll as of late, pushed his Mustang Mach 1 to a 10.71 and 124 mph to land at the top of the list of qualified drivers. He went from there to the winner's circle, where he defeated Dan Ryntz in a 10.62 at 124 mph to 10.88 at 121 mph fight, marking him as the second undefeated racer through four races in the six-race series. The sixteen car Race Pages Coyote Stock field saw Drew Lyons, whose Mustang features the number 1 on its windows, power to a 10.33 and 128 mph for the lead spot after qualifying, and the longtime racer ruled the race track through the final, where he defeated Shane Stymiest in a 10.35 at 128 mph to 10.45 at 126 mph showing. Amanda Saad saw the tree to the tune of .013 to take the top qualified spot in Detroit Locker Truck and Lightning, but the final round saw Vinnie Telesco outrun Nina Gusler by stopping the clocks at 10.62 on his 10.58 index while Gusler turned on the red and dipped under with a 12.77 on her 12.78 limit. In Exedy Racing Clutch Modular Muscle, Susan Roush-McClenaghan was .006 at the hit to take the top qualified spot in her Mustang, but it was her Roush teammate, Donnie Bowles, who picked up the trophy by clocking a 10.10 on his 10.10 index in his final round race against Charlie McCulloch, who was right there with a 10.99 on his 10.98. In Roush Performance Super Stang, Marvin Knack made the top-qualified spot when he left the line in his Mustang in .005 seconds, and stayed strong through the final to dispatch John Mummery by clocking a 12.16 on his 12.08 dial-in while Mummery clocked an off-pace 10.98 on his 10.72 dial-in after spinning off the line. In Flex-A-Lite Open Comp, Jeff Hughes was ready at the hit and showed it with a .001 reaction time, which landed him in the lead qualified spot, but in the end, it was Wes Dalrymple who earned the trip to the winner's circle after laying down a 10.89 on his 10.87 dial-in while Dennis Corn cruised to a 9.75 on his 9.72 for the runner-up spot.

The many fans of the NMRA's new Race Pages Ford Muscle category celebrated Bryan Parker and his 67 Fairlane as the top qualifier after he posted a 12.51 on his 12.50 index, but Chris Parisi won with a 15.07 on his 15.00 index as Danny Towe was runner-up with a 12.06 on his 12.00 index. Brad Gusler trapped a 10.98 and 125 mph in his Mustang to see his name at the top of qualified entries in the Livernois Motorsports EcoBoost Battle, but Bill Putnam pulled out a victory over Gusler in the final, 11.27 to 11.58 for the second time in 2016. In QA1 True Street, presented by Muscle Mustangs and Fast Fords, Lonnie Tibbs was the overall winner with an 8.28 average, while Jason Wagoner was the runner-up with a 9.72 average. Kevin McCotter was the 9-second winner; Cyrus Hutchison was the 10-second winner; Kimberly Walter was the 11-second winner; Casey Shotwell was the 12-second winner; Mark Storts was the 13-second winner; Gaston Brown was the 14-second winner and Chris Parisi was the 15-second winner. Finals rounds of the Race Pages Bracket Classes featured Gary Varney over Travis Gayheart in Fast Ford; Richard Jordan, Jr. over Jenni Merrick-Cree in Quick Ford; Chris Parisi over Daniel Imhoff in Street Ford and Bryan Parker over Jon Pickering in Nostalgia Ford. Then, the Trick Flow Specialties Super Ford Showdown pitted Gary Richmond against Gary Varney, and Richmond took the trip to the winner's circle.

Former NMRA and NMCA world champion Mike Murillo, star of House of Grudge, put on a show for fans whether he was going at it in his pit area or going down track, and the NMRA Grudge Night provided plenty of smack-talking in the lanes about who had the quicker and faster vehicle, who needed a two-car leave and who was going to win. With only two races remaining in the series 2016 tour, the chase to the championships is on, with the next stop being the always-popular 11th Annual Nitto Tire NMRA/NMCA Super Bowl of Street legal Drag Racing, July 28 31, 2016, Route 66 Raceway in Joliet, Illinois. FINAL ELIMINATION BREAKDOWN <<HERE>>