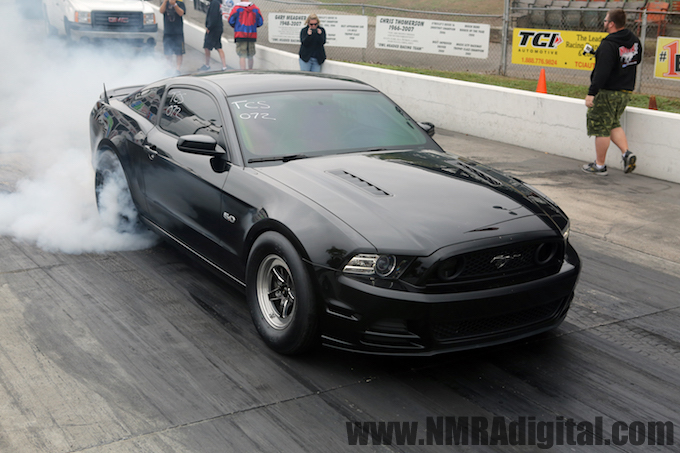 The 2014 Mustang GT of Justin Jordan is very unique given the owner's various racing habits. A modern muscle car is no longer defined by one type of racing discipline but rather a wide-range of fun activities. Jordan doesn't just drag race his Mustang but he is also a fixture on the -mile top speed events and also the longer One-Mile events that have popped up all over the place. In addition to running in NMRA's Turbo Coyote Shootout, Jordan can be found on the No Time grudge racing scene. The Florida resident also takes the car to work some days, though those are very limited since swapping to a new two-speed transmission.

As the NMRA takes aim on Bradenton Motorsports Park March 3-6 for the 22nd annual Nitto Tire Spring Break Shootout, presented by Muscle Mustangs and Fast Fords, Jordan looks to be a contender in his beloved Turbo Coyote Shootout category, which is sponsored by Fluid Turbo Concepts. A recent swap from a 6R80 factory transmission to a race-bred Powerglide has enabled Jordan to bring in the boost from the Hellion Power Systems twin turbo kit much quicker. The better torque converter and application of horsepower sent the 3,800 pound street car to a mind-numbing 7.89 at 172 mph. That instantly puts him fourth overall on the quickest Turbo Coyote listing and only second behind Justin Burcham for Turbo Coyote Shootout legal cars. And with Burcham rumored to be running VP Racing Fuels Street Outlaws, that leaves the door wide-open for Jordan to solidify himself as the front runner in that category in two weeks during the Spring Break Shootout.

It will be an uphill battle for the Florida resident with a new heavy hitter coming out of the JPC Racing camp and the emergence of a new Urist in the class, Melissa Urist. Her 2015 Mustang GT dropped into the 8s at the conclusion of last season but some winter upgrades has the team looking to go even quicker. With two weeks to go until the gates open at Bradenton Motorsports Park, the Turbo Coyote Shootout will showcase the latest street cars on the Mustang scene and is sure to be filled with 8-second rides and a couple that will dip into the 7s.
Hellion
,
Nitto Tire
,
Precision Turbo
,
Spring Break Shootout
,
Turbo Coyote