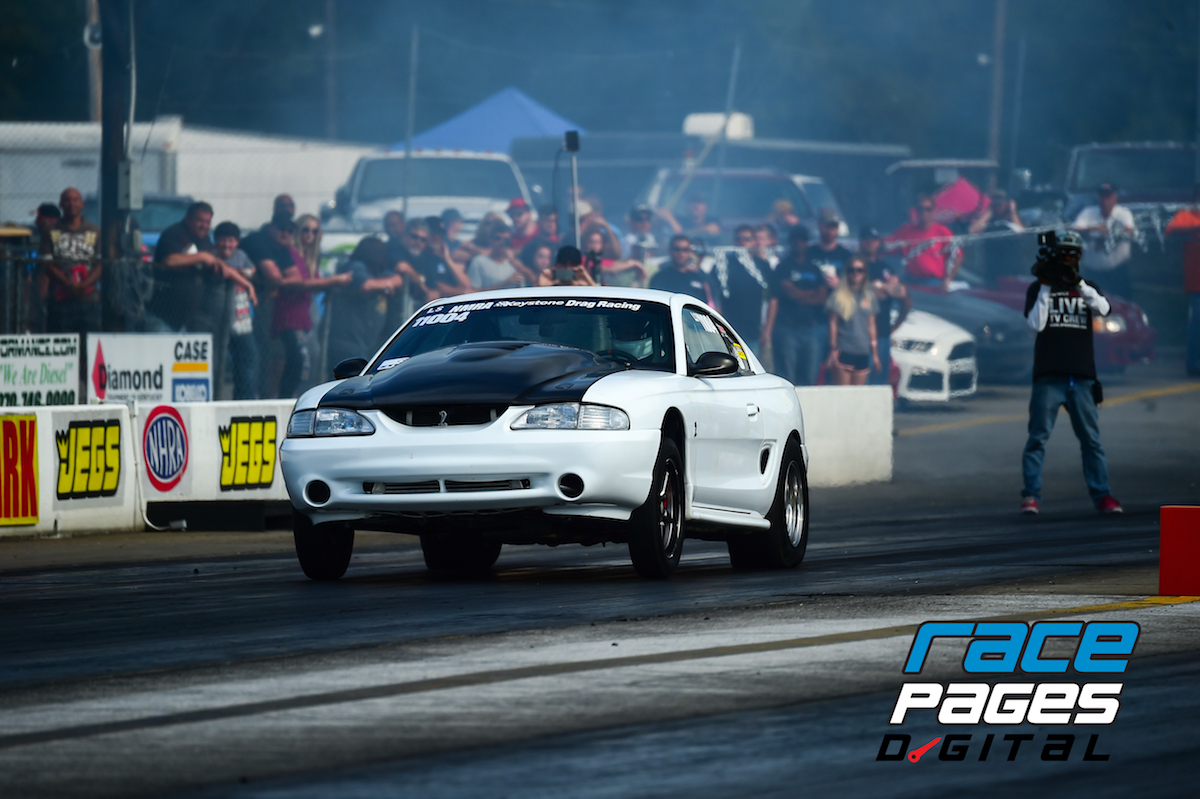 The 19th Annual Nitto Tire NMRA World Finals at Bowling Green, Kentucky's Beech Bend Raceway Park hosted the first-ever NMRA Steeda Autosports Limited Street competition, and the bragging rights for making history as the inaugural winner of the class were earned by NMRA newbie Kelly Shotwell. Shotwell, who hails from Carlisle, Ohio, originally came to the event with intentions of simply being competitive. I had never run a heads-up event like that before, so it was a learning curve for me and the guys helping with the car, laughed Shotwell, whose level-headed attitude may have been a factor in his smooth performance. I had already been testing the car which was pretty close to being class legal as is so it gave me a bit of an advantage on the other guys. Those test sessions certainly paid off, as Shotwell shot to the top of the qualifying order when he ran 8.938 at 159.39 mph in his ShopRaceParts.com-backed 95 Mustang Cobra in Steeda Autosports Limited Street trim. We put it all on the table right off the trailer. We weren't going to wait and see what everyone else qualified with, admitted Shotwell, whose go big or go home gamble worked in his favor. A few minor suspension tweaks and tuning adjustments to his Holley EFI system to accommodate the changing weather were all he needed to prep for eliminations, and Shotwell was off and running. Although Shotwell was scheduled to run against Kevin McCotter in round one but wound up with a bye instead, he still ran it out the back end to the tune of 8.966 at 153.84 mph. In round two, Shotwell put Scott Barker on the trailer when he ran 8.974 at 153.82 mph nearly a full second quicker than Barker's 9.891 at 137.47 mph effort. Then, in the finals, Shotwell defeated Shawn Johnson with an 8.998 at 153.79 mph trip. I really didn't think I'd win my first ever heads-up NMRA event, but I'll take it! added Shotwell. To sweeten the win, he was also the first to the 8-second zone in the category as he clicked off an impressively consistent string of passes throughout the weekend. Thanks to Tony McKinney, Todd Dennis, Bo Webb, and Casey Shotwell, my younger brother was with me in Bowling Green, racing in True Street with his 16 car. Also, a huge thank you to my wife, Frances, for all of her support through all the days spent at the track and in the garage. It wasn't just luck that got Shotwell into the Aerospace Components Winner's Circle, though, as he put considerable time and effort into ensuring his street-driven Mustang was both quick and reliable. Nye's Automotive in Muncie, Indiana, built the 331 ci engine which is topped with Trick Flow Twisted Wedge 11R cylinder heads that came straight out of the box. Also from Trick Flow is the EFI lower manifold, while the 7675 turbocharger was sourced from Precision and an air-air intercooler was added to keep inlet temperatures nice and cool. Shotwell gets a lot of compliments on both the custom turbo kit as well as the 8.50-cert roll cage, and both were fabricated by the talented hands of Jason Zimmers. Backing the engine is a Powerglide transmission built by JW Performance and PTC torque converter combination, and Strange components in the rear end work in conjunction with the gearbox to ensure every ounce of power produced by the engine makes it back down to the racing surface. Running on E85 fuel with a Fore Innovations fuel system, Shotwell's Mustang was tuned by Complete Auto Repair in Farmersville, Ohio. I drive it all the time, I run True Street events local at home, and Complete Auto did a really great job putting it together and getting the Holley EFI set up, noted Shotwell, who prides himself on the fact that his boosted Cobra runs at full weight, still has a full interior, 15-gallon gas tank out back, and even street car-style tail pipes. It's really just a very simple set up that works really well. Literally the weekend prior to his win in NMRA Steeda Autosports Limited Street, Shotwell ran a personal best of 8.74 at 156 mph while competing in True Street at Kil-Kare Raceway in Xenia, Ohio and took the runner-up honors there. I had to put some weight back in for Limited Street, which is why it slowed down a touch, he explained, but was fully confident that his Cobra could run even quicker with some more minor changes and a little more boost. I put the car together in March and haven't even had the valve cover off since then. The last fourteen passes on the car have been 8-second runs, and I've done literally nothing except race it, change the oil, and play with the tune. As the 2017 racing season begins to die down, Shotwell is planning his calendar for 2018. Although he toyed with the idea of Coyote-swapping his Cobra over the winter, he had such a great time in Bowling Green that he decided to keep it as-is and has committed to running the Limited Street category for the year, beginning with the NMRA season-opener event in Bradenton, Florida.
Kelly Shotwell
,
Limited Street
,
nmra
,
Steeda Autosports