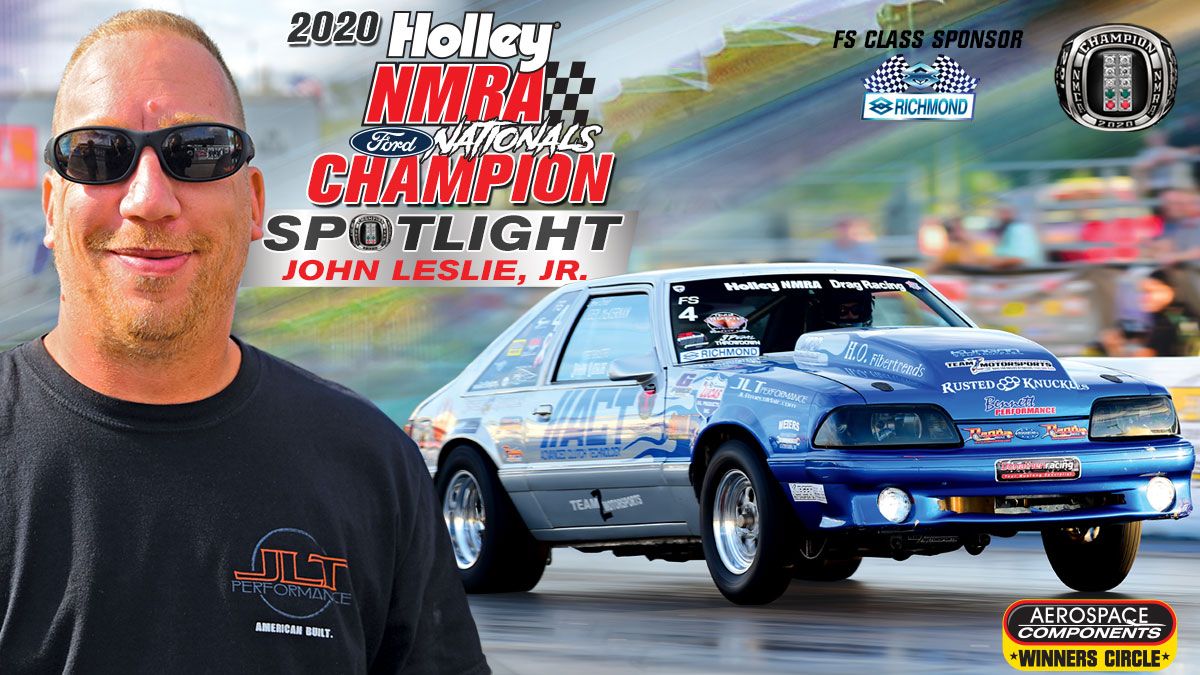 In that time, he has fascinated fans with his hard launches, high wheelies and hurried shifting in a couple of different Mustangs, but most recently in his silver and blue bullet boasting a Coyote engine by MPR Racing Engines, a G101-A by G-Force Racing Transmissions, an ACT clutch and a chassis and suspension by Team Z Motorsports.

After an admirable fourth-place finish in points in 2019, Leslie Jr. was aiming to go all the way to the top in 2020. He got started by qualifying in the second spot with a 10.23 and exiting eliminations in the first round after a close 10.36 to 10.37 race at the first NMRA event of the season, the 26th Annual Nitto NMRA Spring Break Shootout, which was Feb. 27-March 1 at Bradenton Motorsports Park in Florida.

On our way to the race in Florida, we stopped at Kurgan Motorsports, where Bob Kurgan took over duties of tuning my MPR Racing Engines-powered beast, said Leslie Jr. After some killer tuning, we made it to Florida for some pre-race testing, and with some adjustments to our ACT clutch and Team Z Motorsports chassis and suspension, we were ready to go. We qualified well, but then had gremlins throughout the weekend.

The impressive Indiana-based driver put that in the past and set the pace in qualifying with a 10.33 and went all the way to the Aerospace Components Winner's Circle after another close race, this time with a 10.53 to his opponent's 10.57, at the 12th Annual Scoggin-Dickey Parts Center NMRA/NMCA All-Star Nationals in June at Atlanta Dragway. His 10.33, and the 128 mph it came with, were the lowest elapsed-time and top-speed in the category that weekend. 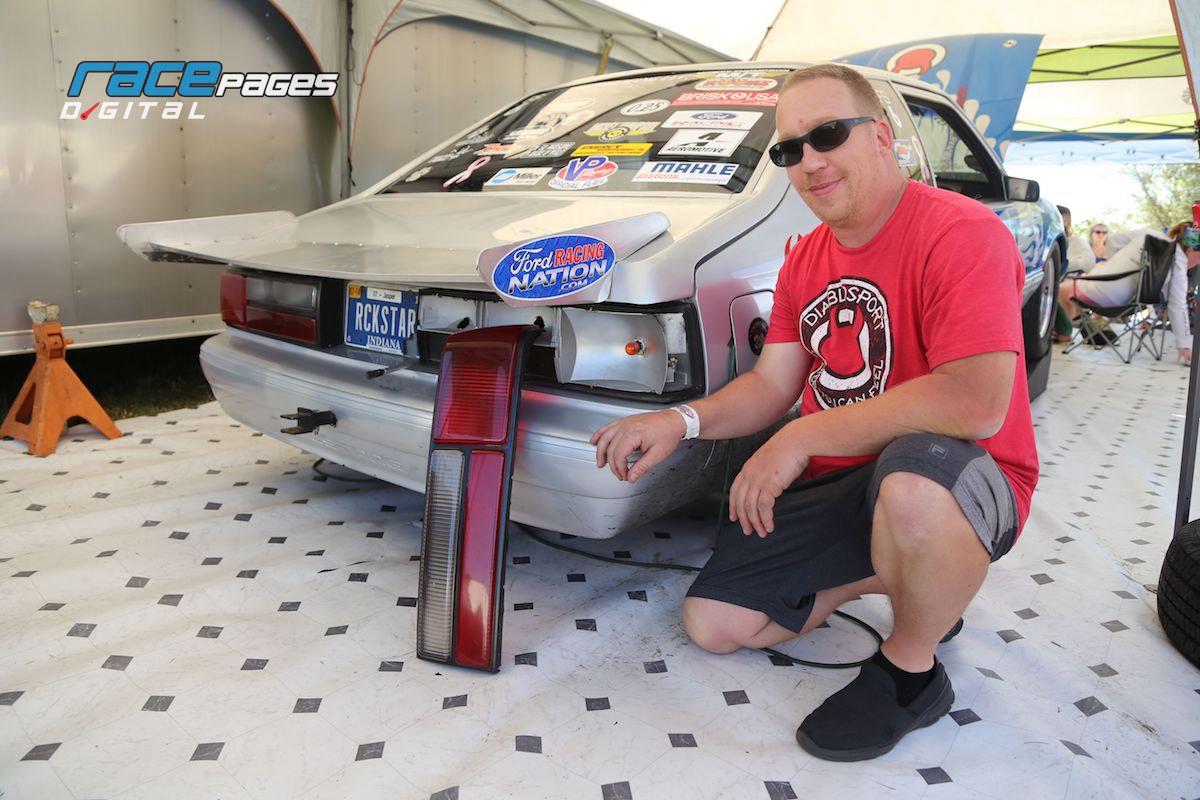 On a roll, Leslie Jr. set the pace again, this time with an even-quicker 10.27, and ran to the runner-up finish with a 10.37 at the Nitto Tire NMRA/NMCA Super Bowl of Street-Legal Drag Racing presented by HPJ Performance in early August at World Wide Technology Raceway in Illinois.

He then qualified in the second spot with a 10.27, and later, with a consistent 10.28, took another trip to the Aerospace Components Winner's Circle at the Arrington Performance NMRA/NMCA All-American Nationals presented by Force Engineering in late August at U.S. 131 Motorsports Park in Michigan.

Saving the very best for last, Leslie Jr. led qualifying with a 10.12 a personal best and rowed gears to another win and the 2020 NMRA Richmond Gear Factory Stock championship at the final NMRA event of the season, the NMRA All-Ford World Finals featuring the Holley Intergalactic Ford Festival in September at Beech Bend Raceway in Kentucky.

The race in Bowling Green was almost perfect, said Leslie Jr. The focus was on the championship, with major help from Eddie Bennett III, Steve Higgins and my crew chief, Joey McKernan. We felt very confident. Then it was celebration time.

While the Coronavirus pandemic prevented NMRA from having its annual ceremony to celebrate champions, each was invited to share the words they would have shared on stage in front of their fellow racers, family and friends. 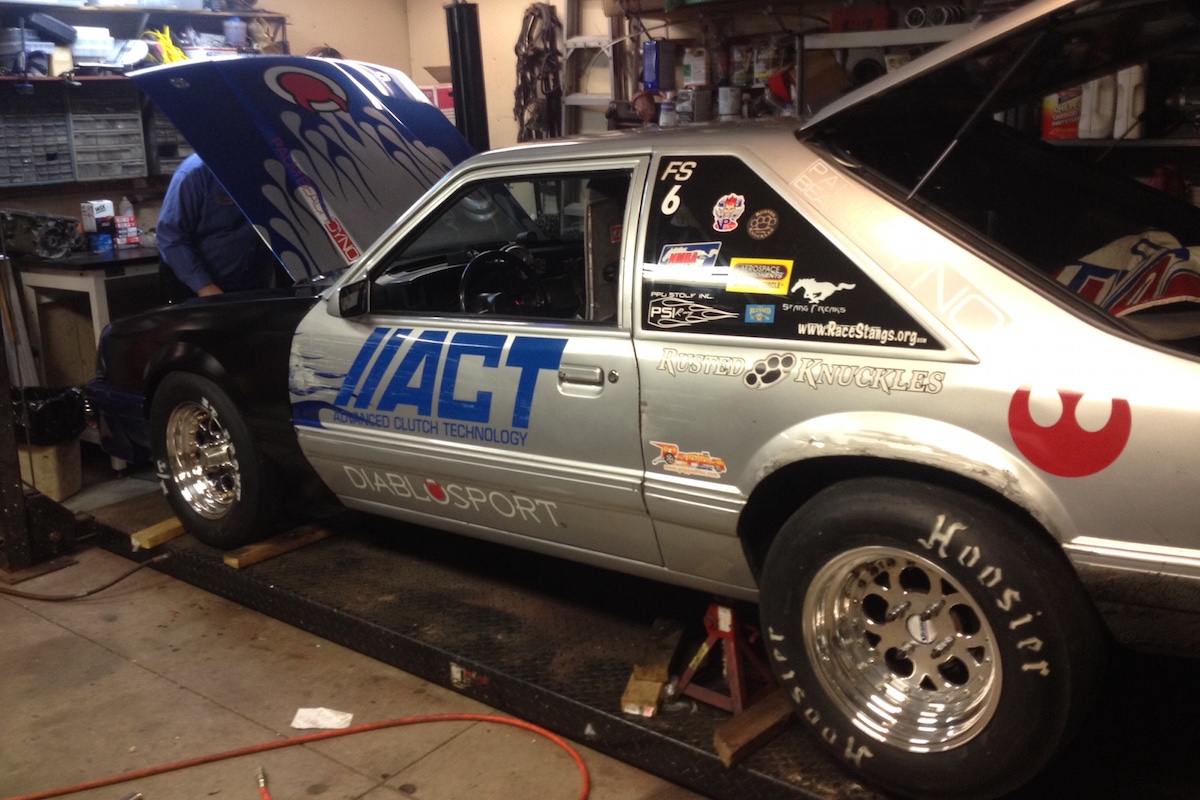 The 2020 season has been very unusual with races being dropped or moved around, but it hasn't changed our mindset of doing the best that we can, and striving and working for the win. It feels that much greater to win the championship under such diverse conditions, and the fact that it took twenty years in this class to finally win a championship.

The biggest challenge this year was keeping the car consistent on the launches. We had been fighting a chassis issue all year, which was causing the car to launch and go right. One pass, it would go straight, and then the next two or three passes, it would go right, so that was definitely been our biggest issue to try to overcome all year.

I would like to thank the following sponsors: Advanced Clutch Technology (ACT), and Dirk Starksen, Richard Barsamian and team for the best clutches on the planet; Team Z Motorsports and David Zimmerman, Frank, David Zimmerman Jr. and crew for all of the help and support after I damage so many things and for the best suspension product there is; MPR Racing Engines and Tim Eichhorn, Tyler, Christina and Emily for building the best engines; Kurgan Motorsports and Bob Kurgan for giving me the killer tune this season and for all of the tuning support I've needed this year; JLT Performance and Jay, Lisa, Vinnie and crew for the best cold air intakes on the market; Pappa Shine and Greg Arnold and Greg Jr, for always making me look good, win or lose, and for the best cleaning products for my car; HO Fibertrends and Jim Wickline, for the best-looking and functional hoods there are; Rusted Knuckles and Ryan Stevens, for always taking care of me, be it with tires, trailer parts or anything I need; Meier's Automotive and Tony, Tony Jr, Cynthia, family and crew, for all of the help all of the time, in and out of the shop and at the track and to mom for watching over us as we kicked butt this year; G-Force Racing Transmissions and Long Shifters, and Paul Long, for building me a killer transmission that will not break on me, and for all of the help at the track when needed; Midwest Fox Rods and Jon Wise, for taking care of my body and paint and always supporting me; Lucas Oil and Tom Bogner, for the best products and oil; Laris Insurance and Mark Anderson, my racing buddy and race car insurance rep; Scobee Transmissions and Sean Scobee, for always helping me with my trans on the fly; Strange Engineering and JC Cascio, for always handling my rear end parts and my struts and shocks; Curt Lamm, for the use of the dyno whenever needed; Body Art and Bobby Barker and crew, for handling any paint and mishaps I have with my car; Stifflers and Brian Figg, for the support and help with great products, and Aeromotive Fuel Systems and Johnson Barrick, for the best fuel systems.

I love the NMRA Factory Stock class. All of the fierce competition and camaraderie in the class is amazing. I've met so many people in my twenty years in the class, and many have become close friends as well as family. The NMRA is one of the best circuits out there, and I'd like to thank each and every employee as well as the owners for giving us a place to race as and call home. 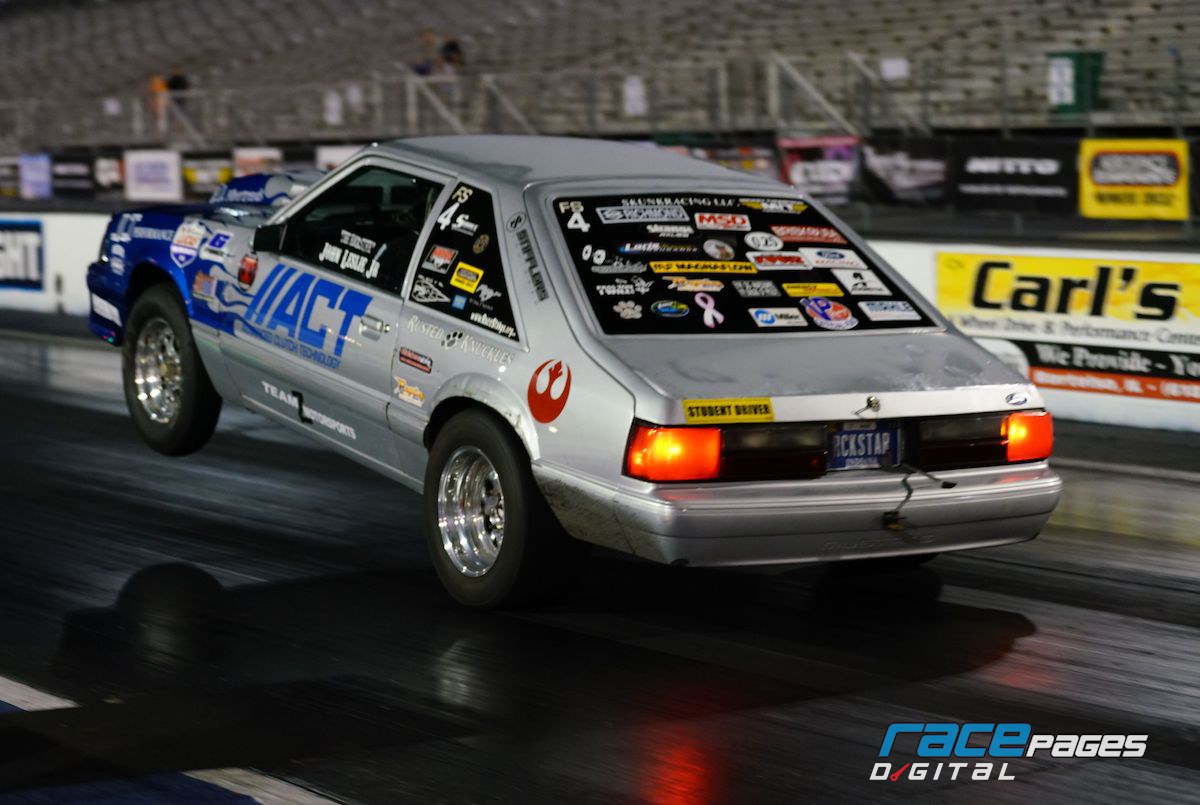