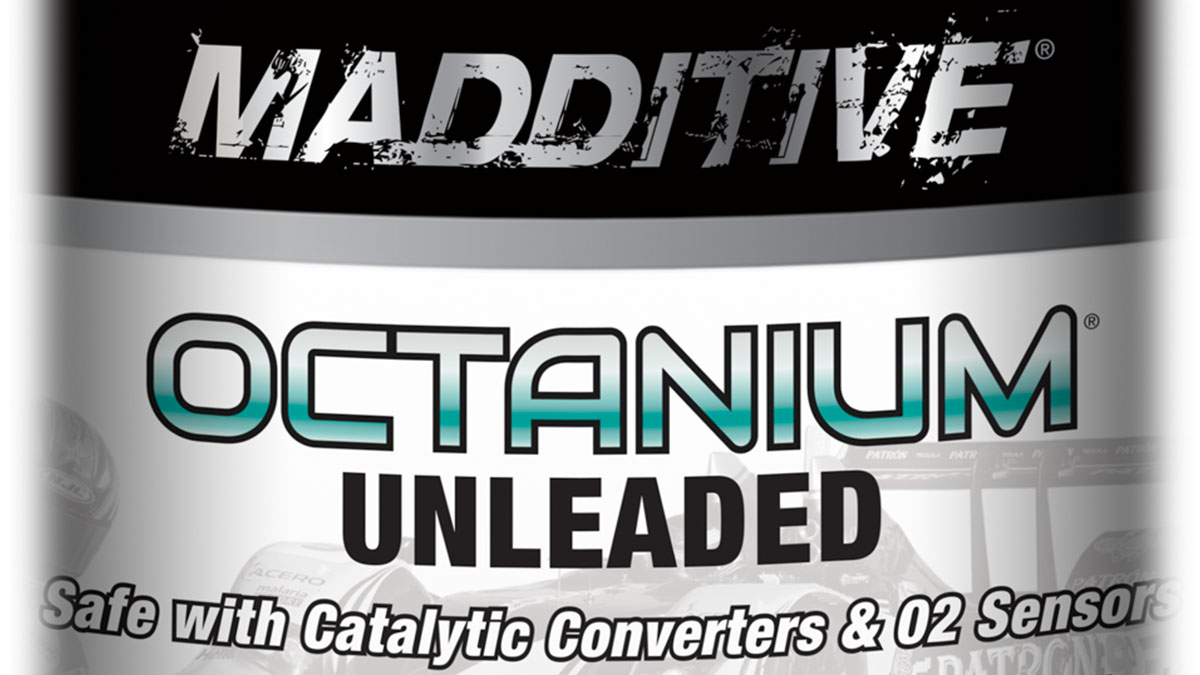 VP Racing Fuels, which sponsors the top categories in the NMCA and NMRA, is widely known as a go-to company for high-performance racing fuels, but the company expanded its portfolio of products recently. Those offerings include a line of fuel and coolant additives called Madditives that are designed to improve the performance of your vehicle in a number of areas.

VP Racing's dive into the additive market began about three years ago and the company keeps rolling out new products. Of course, one of the most common additives you'll see on the market is octane booster, and VP Racing's Octanium Unleaded definitely fits the bill. To get the lowdown on Octanium Unleaded and the other VP Racing Madditives, we rang up Steve Patti, V.P. of Marketing for VP Racing Fuels. With Octanium Unleaded, it raises the octane rating of one tank of fuel by seven numbers, so 93 can be increased up to 100, Patti told us. Other companies use a points system, so we try to educate shops and salesmen that after the reading at pump, you add up to seven numbers. The product is a great option for track days and dyno sessions the pump gas you fill up with before hitting the track or dyno may not be exactly what the number at the pump reads, and using a product like Octanium Unleaded can ensure your vehicle will be performing at its best when you're asking the most from it. The biggest application we see with this is with track-day usage, Patti said. Many performance and engine shops have tested Octanium Unleaded. There are lots of SoCal guys using premium, but it's usually only 87 or 89 not 91 in some instances, that can be up to a 50-horsepower loss. They put the Octanium Unleaded in and got up to 50 horsepower back and sometimes as much as 20-30 more. According to Patti, there is some wiggle room on the measurement of octane as it is not a perfect science. The measurement could be one to two numbers off. The government understands that there can be discrepancies in the measurement process and the federal requirements take that into consideration. While Octanium Unleaded is designed for track use in vehicles with O2 sensors, it also comes in a leaded version that offers up to eight additional numbers over the octane rating at the pump. Diesel enthusiasts aren't left out either, as VP Racing offers its Cetanium product, which raises the cetane rating up to 10 numbers for off-road diesel racing applications. It also cleans injectors and pumps, improves fuel mileage, and helps with smoke reduction and diesel lubrication. For those who don't necessarily need the octane boost, but are looking to keep their fuel injectors clean, VP Racing offers its 7-in-1 product for all two- and four-cycle-powered machines. It eliminates knocking and pinging, hits on the ethanol and stabilizes the fuel, Patti explained. You don't know how much ethanol blending you're getting in pump gas. And for cars that are going to get stored for long periods of time, the company also offers fuel stabilizers for both gasoline and diesel applications. As VP Racing was founded on improving performance through racing fuels, the company also went beyond the fuel system with its Madditives line. We have these great chemistry experts, so we thought, let's look at the drivetrain as a system, and engineer our products to include our lubricants blended into these additives, and implement cool-down technology, Patti said regarding the company's cooling system products. Cool Down is just magic. It should be a staple in everyone's radiator, Patti told us. When you're talking about ECU performance, it detects excessive heat. Cool Down lowers cylinder head temps up to 75 degrees, and it increases coolant flow for better heat transfer, which can reduce coolant temps up to 30 degrees. It protects sensitive aluminum, mixes with all coolants, and acts as a coolant extender. We also queried Patti on whether or not Cool Down would be beneficial in an air-to-water intercooler or heat exchanger application, as its benefits could help there as well. Stay Frosty is better for intercoolers, Patti explained. It is a coolant replacement offered in two versions a street-legal version that reduces engine temperatures up to 25 degrees, and a race version that is glycol-free, and reduces head temps up to 80 degrees. The last Madditive we discussed was ATF Pro, which as you might imagine is designed for automatic transmissions. It reduces temperatures up to 40 degrees and protects against oxidation as well as shuddering in torque converters for smoother operation. Maybe most impressive is that it will double your ATF change interval. Source VP Racing Fuels VPRacingFuels.com (210) 635-7744
fuel additives
,
Madditives
,
VP Racing Fuels