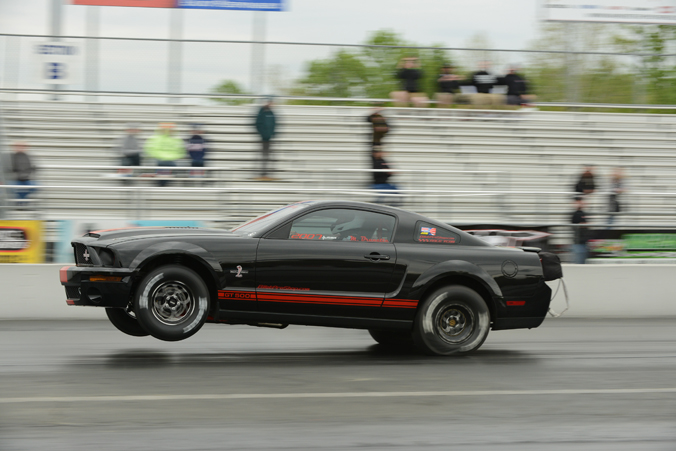 For the past few years the NMRA has hosted the VMP Superchargers Terminator vs. GT500 Shootout with a wide-variety of awesome SVT vehicles making the field. The stop in Maryland is a special one because NMRA officials take the top two stick-shift entries and have them face-off in the McLeod Racing SVT Stick Shootout. This year Mat Brunette of Billet Pro Shop lined up against legendary Mustang drag racer Jimmy LaRocca for bragging rights. Brunette slid behind the wheel of a 2007 Shelby GT500 while LaRocca was in a 2008 model and both vehicles feature a VMP Superchargers Roots supercharger. The Canadian racer won the match-up handily with an 8.85 at 160 mph, putting his name in the record books and setting up a string of 8.80s that would make one think Brunette was a seasoned bracket racer. The fact he was rowing a Tremec T-56 and not some race-bred transmission, like a Liberty Equalizer, shows Brunette's ability as a driver and Billet Pro Shop's capabilities in building power and performance.

The Shelby GT500 makes that unmistakable quick shift action of a face-plated transmission, of which Liberty Gears is credited for the T-56 modifications. Brunette shared his driving technique, my right foot is plated the whole way through the run. I keep constant pressure on the shifter and as soon as I snap, the clutch goes in automatically. He also pointed out the use of a couple of electronic aids such as the traditional two-step for starting line rpm and a WOT box by N2MB Racing. Brunette set the WOT box to cut the ignition for just fifty milliseconds, enabling easier shifting when on the hammer. The clutch is an off-the-shelf McLeod Racing RXT that is durable and up to the task of eight-second runs. The trick to going quick and consistent isn't as much a parts list as it is driving skill with a car that has a balance of power. It is the perfect amount of torque and power, we are making the right horsepower to get the job. It is easy to have too much power, explained Brunette. The power comes from a modified 5.4L engine, which isn't too out of the ordinary.

On top is a VMP Superchargers 2.3 Roots-style supercharger that has approximately seventy hours of porting. Brunette and Billet Pro Shop spent a considerable amount of time modifying the inlet manifold for maximum flow and also allow them to bolt-on a Whipple Monoblade throttle body, which features a 170mm opening. Contrary to popular beliefs, there is no nitrous as it was removed over the winter after so-so results in Bowling Green last year.

Moving below the supercharger reveals a stock crankshaft, upgraded connecting rods, and custom pistons that put the compression ratio at 10.25:1. The heads have been ported, polished, and new valves installed along with four custom camshafts. Surprisingly, the factory return-less fuel system is still intact with only a pair of Aeromotive Stealth 340 lph fuel pumps installed in the factory fuel hat and a set of Ford Racing Cobra Jet fuel injections (80 lb/hr) fastened between the stock fuel rails and ported lower manifold. The final component to a racecar is chassis modifications and Brunette credits the setup as being key to consistency. The front and rear suspension components are BMR Fabrication with QA1 adjustable coil-over front struts and Viking double adjustable rear shocks.

Billet Pro Shop grabbed a set of Mustang V-6 springs to compliment the Viking shocks in the back. After testing several different tires, Brunette settled on a pair of Hoosier 29x10.5W tires. He credits the sidewall stiffness and bias-ply construction for its excellent top-end charge and compatibility with the stick-shift. The car weighs 3,035 pounds without the driver, putting race weight roughly in the 3,250-pound range. The car isn't gutted as Brunette took great care selecting lightweight components to keep the Shelby GT500's integrity as a real car and not some flimsy shell of what it once had been. It adds up to consistent 1.33 sixty-foot times with a best of 1.31.

The best time thus far is an 8.84 at 163 mph, just a tick behind the Shelby GT500 Six-speed record of 8.80, held by Mark Duber. Brunette is planning to surpass it this Fall during the Nitto Tire NMRA All-Ford World Finals as a new 5.8L engine with more compression and some other tricks is being installed below the VMP blower.