By Mary Lendzion Mike Roup has been racing the wheels off of the 1970 Ranchero he purchased from a fellow racer five years ago. In the truck powered by a 351 Windsor bored and stroked to a 427 cubic-inch engine based on a Dart block, he finished second in Detroit Locker Truck and Lightning points in 2019 and 2020, and was committed to taking home a championship in 2021. He qualified in the second spot with a .009 reaction time and went to the NMRA Winner’s Circle with an 11.36 on an 11.31 dial at the BMR Suspension NMRA Spring Break Shootout in March at Bradenton Motorsports Park in Florida. “The truck isn’t the fastest, but it consistently runs the numbers, and that’s really important for racing in Detroit Locker Truck and Lightning,” said Roup. “My fellow racer and crew chief, Bryan Parker, helps me with the set-up, and we have obtained a lot of data.” The Texan then qualified in the third spot with an .015 reaction time and exited eliminations in the second round with an 11.32 on an 11.31 dial at the Scoggin Dickey Parts Center NMRA/NMCA All-Star Nationals presented by MAHLE Motorsport in April at Atlanta Dragway. Anxious to go all the way again, Roup qualified in the third spot with an .018 reaction time and won with an 11.28 on an 11.23 dial at the NMRA/NMCA Super Bowl of Street Legal Drag Racing presented by HPJ Performance in May at World Wide Technology Raceway in Illinois. “It was really nice to earn two wins early in the season, and it helped with points,” said Roup. 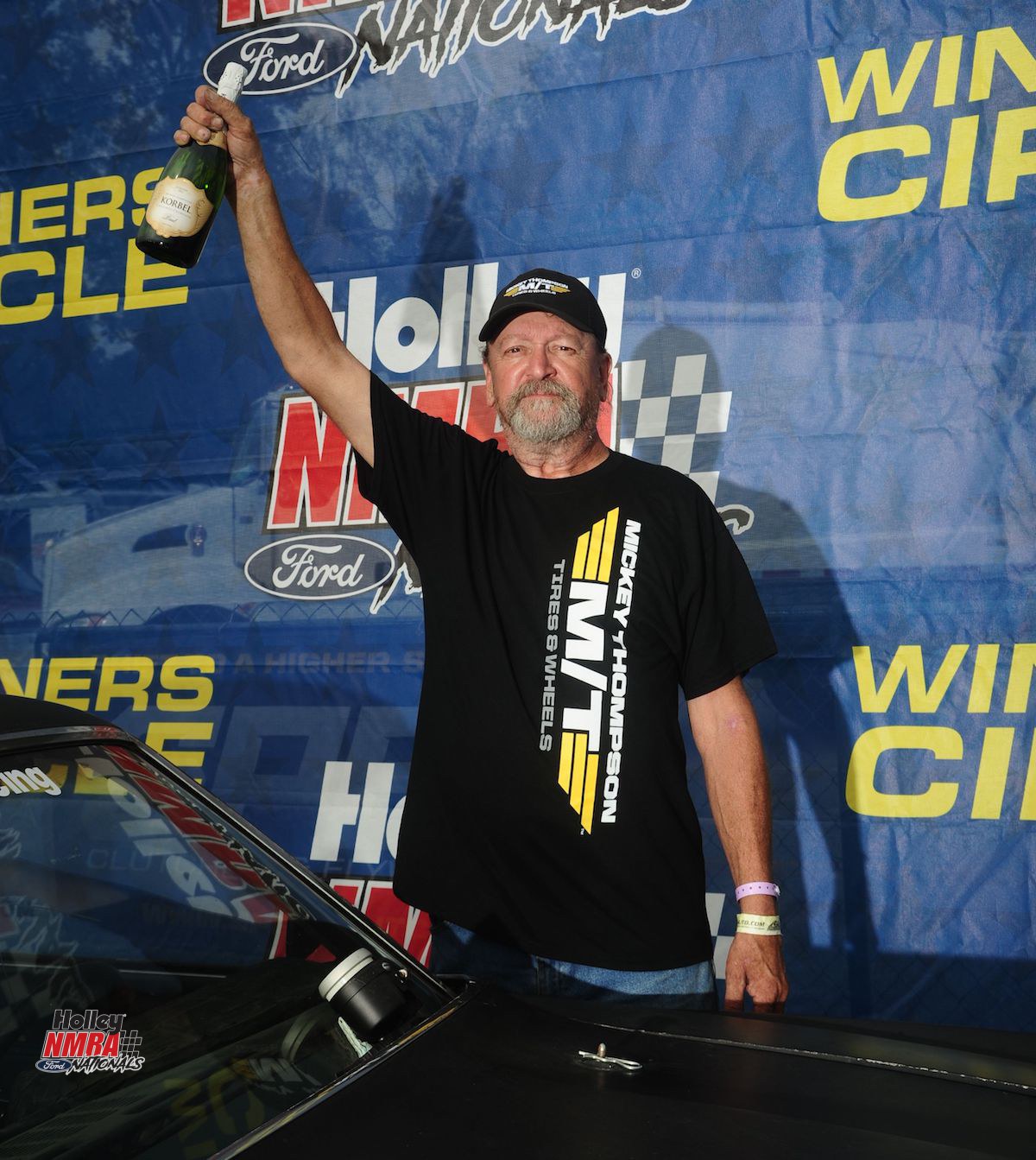 He followed that with a .001 reaction time to lead qualifying and lost in the semifinal round of eliminations after an -.014 red light at the NMRA Ford Performance Nationals in June at Summit Motorsports Park in Ohio. Then, he qualified in the fifth spot with an .020 reaction time and lost in the first round of eliminations after breaking out with an 11.33 on an 11.34 dial at the Inaugural Arrington Performance NMRA/NMCA Power Festival presented by Force Engineering in July at U.S. 131 Motorsports Park in Michigan. With a very successful end to the season just over the horizon, Roup headed to the Whipple Superchargers NMRA All-Ford World Finals presented by Competition Clutch and Holley Intergalactic Ford Festival in September at Beech Bend Raceway Park in Kentucky. After arriving, he led qualifying with a .007 reaction time, exited eliminations in the second round with an 11.27 on an 11.25 dial and secured the 2021 Detroit Locker Truck and Lightning championship. “The racers in Detroit Locker Truck and Lightning are very tough, and you have to have great reaction times and run close to your number to be able to win, so it was very satisfying to earn the championship in the category in 2021,” said Roup, who also earned an NMCA Super Truck championship in 2006 and an NMCA MagnaFuel Open Comp championship 2009. “In addition to Bryan Parker, I would like to thank my wife, Susana; my friend, Doug Cash, who helps me work on my vehicle at home, and Ricky Scheulen, who comes to my shop, Mike’s Auto Repair in Lockart, Texas, to rebuild transmissions on the bench, which is really helpful when I’m away at races.” Roup will be recognized for his efforts at the NMRA Ford Nationals Champions Ceremony, which will be held during the PRI Show on Dec. 10 at the Indiana Convention Center in Indianapolis, and in the upcoming Champions Issue of Fastest Street Car Magazine. “The Ranchero will look different in 2022,” said Roup. “We’re getting ready to paint it a Ford color, Sonic Blue, and it will have the number 1 in the windows.” 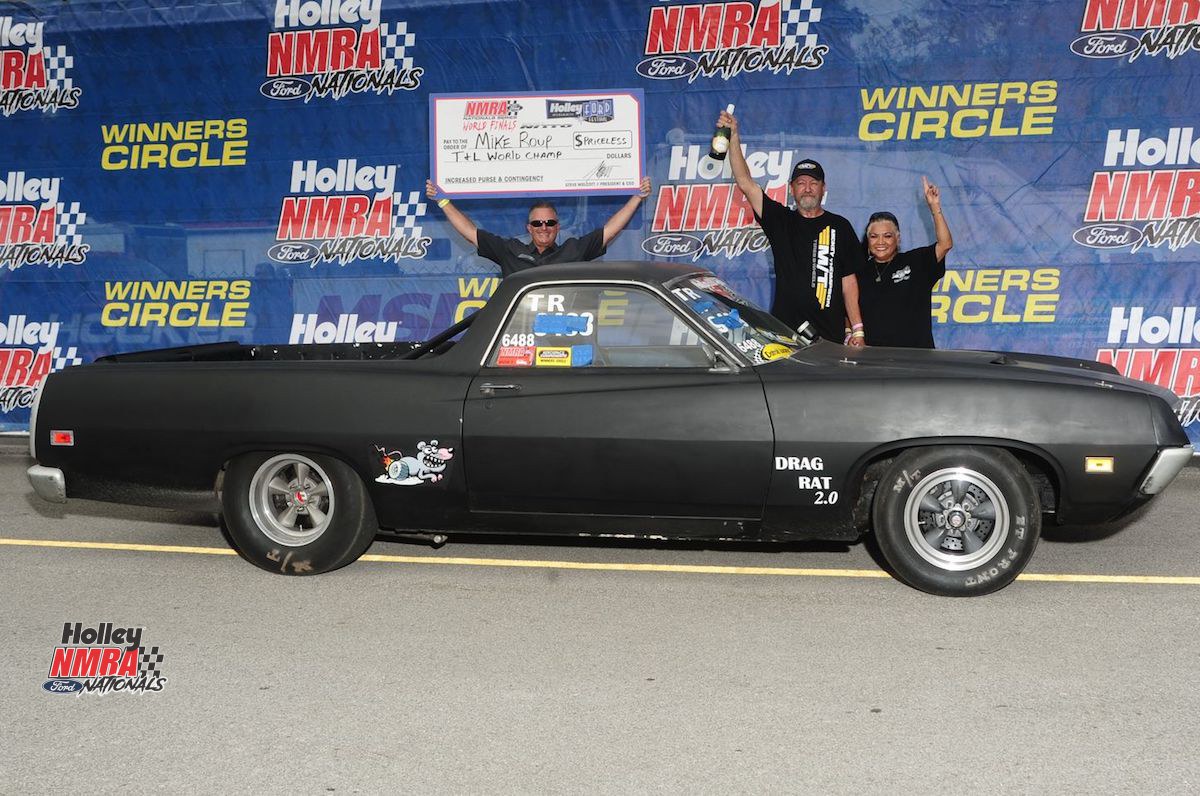