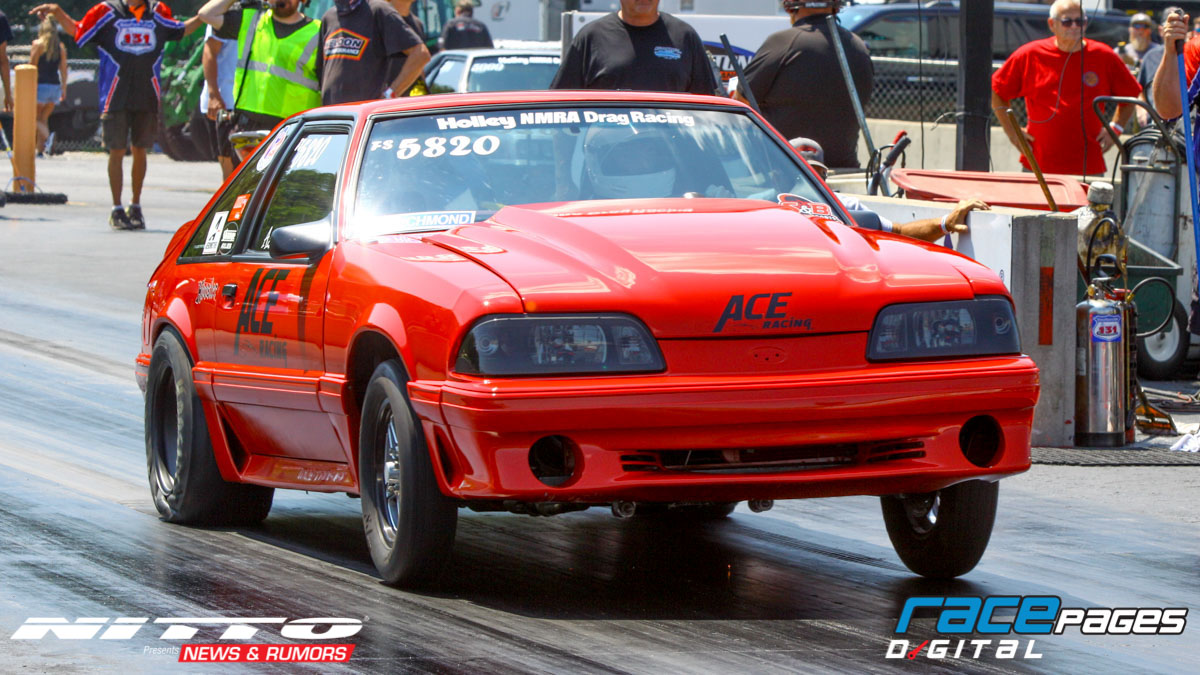 Bitten by the bracket bug early in life, Aaron Worstell was inspired to switch to heads up racing after attending an NMRA event nearly decade ago. Now, with his 1992 Ford Mustang GT, he's moving forward in NMRA Richmond Gear Factory Stock. Worstell had success on the NHRA circuit and even picked up a few coveted Wally trophies for his bracket racing wins with his 1989 Mustang and runs an upholstery shop called Auto Air Garage, but it wasn't until he found the NMRA that he found his true calling. I went to a race in Budds Creek [Maryland] with a friend who had a Cobra and they were running Coyote Stock there. I decided that was the route I wanted to take with my racing, recalled the Missouri-based driver of the circa-2014 event at Maryland International Raceway. It took a few years to get all the pieces in place to make it happen, but Worstell was able to purchase his current Fox body which previously belonged to Ben Calimer in June of 2021. The car was already together and running, and Worstell had hopes to make the Inaugural NMRA Ford Performance Nationals at Summit Motorsports Park in Norwalk, Ohio, that same month, but ultimately wasn't able to as it took a little time to get everything ironed out.

However, thanks to support and guidance from NMRA standout and two-time Factory Stock champion Shane Stymiest, Worstell was able to race at the Inaugural Arrington Performance NMRA/NMCA Power Festival Presented by Force Engineering in Martin, Michigan, in July. We're running a sealed Gen 2 Coyote engine with a Gen 3 intake on it and Shane tunes the car. He's helped me so much to get up to speed, noted Worstell. Mated to the engine is a four-speed manual G-Force G101A transmission with an Ace Racing clutch. Worstell, whose program is supported by Ace Racing, has been working with the company on testing different friction materials for their clutches and has been extremely happy with the results to date. The simple-yet-effective combination also includes a Ford 8.8 rearend that has been set up by Grant Scott at GS Performance Automotive with PEM Racing lightened ring gears and more. Viking shocks on the rear and Strange Engineering units up front, along with Strange brakes all the way around, complete the modest Factory Stock package.

At US 131 Motorsports Park in Michigan, Worstell ran a best qualifying pass of 10.853 at 123.52 mph during NMRA Richmond Gear Factory Stock with his Ace Racing-backed Mustang and settled into eighth in the order. We had to take the transmission out make some clutch adjustments after the first hit but got it going, Worstell explained of the weekend woes. In eliminations, he faced the number one qualified driver of the weekend, Mark Anderson, and knew he had a tough match ahead. My goal was just to give him a race and let him know we were there. We had a good run but he beat us by less than a tenth I took itself that as a win, said the rookie heads-up racer who was pleased with how his first-ever heads up elimination round panned out. We're putting on a RacePak system to get some data and be able to play with the clutch a little more.

Looking ahead, Worstell plans to finish out the remained of the NMRA season and attend Jacob Lamb's annual Factory Hot Rod race. For 2022, he will continue in NMRA Richmond Gear Factory Stock as a way to get more familiar with his car and stock up on seat time before finally moving into his intended class NMRA G-Force Racing Coyote Stock in 2023. Worstell's previous bracket car, however, hasn't been ignored; he handed the wheel over to his father, Bill Worstell, to run in NMRA Ford Muscle so that the two can enjoy their time at the track together.
Aaron Worstell
,
fox body mustang
,
NMRA Richmond Gear Factory Stock
,
Richmond Gear
,
US 131 Motorsports Park