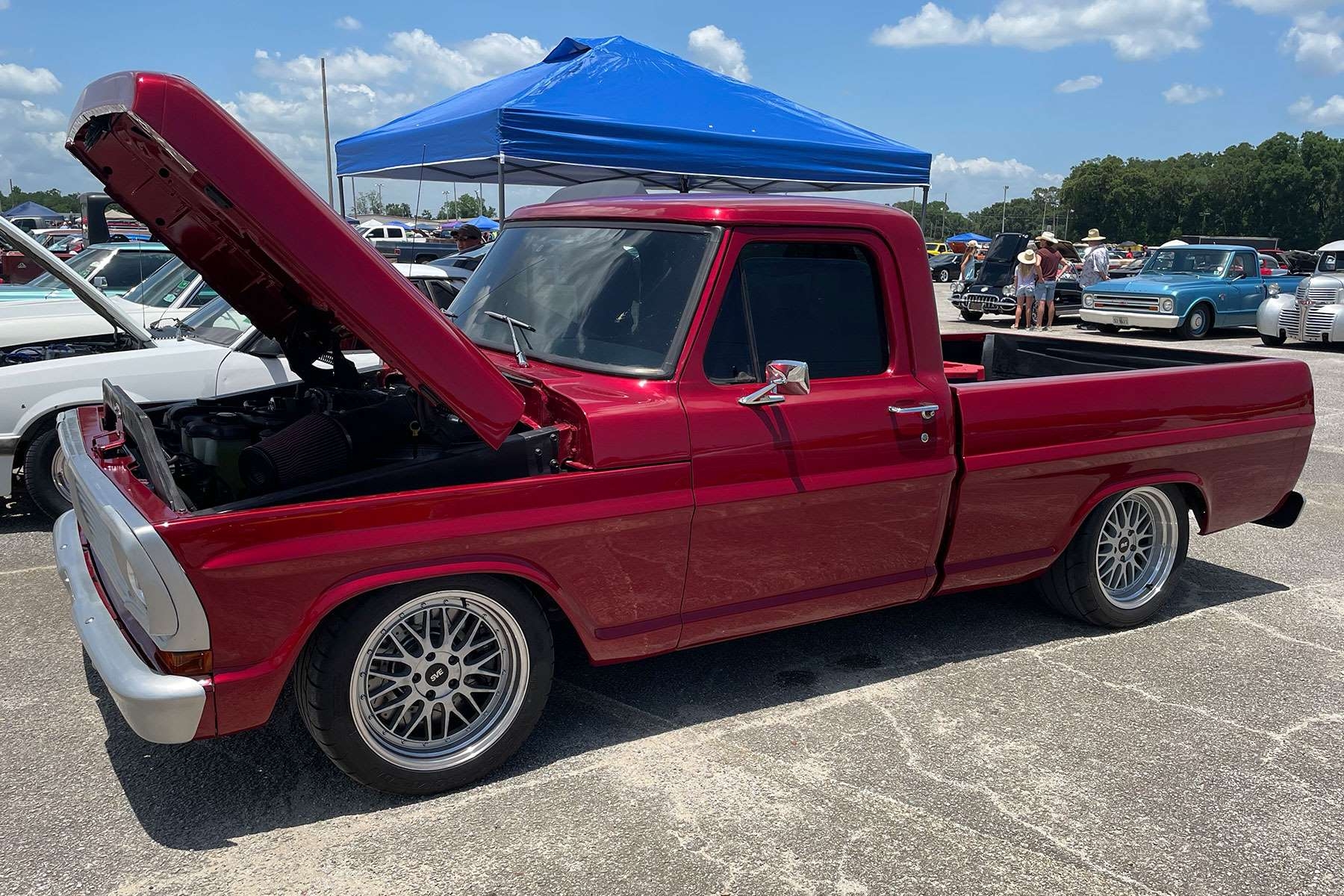 Under the hood of the truck, a 5.4-liter engine pilfered from a Shelby GT500 and a VMP supercharger sits ready to deliver more than 700-wheel horsepower down to the ground via a Ford 6-speed manual gearbox. Conner and his crew updated the suspension with a Ford Mustang Cobra independent rear suspension to keep the ride smooth on the streets while an aftermarket bench seat adds more even comfort for lucky passengers.

A week prior to the start of the world’s largest traveling car show, the guys took the truck out for some final shakedown runs to assure its road-worthiness. Everything went well, but, as is so often the case with performance vehicles, unexpected gremlins surfaced at the last possible moment and threw a wrench in the initial plans. “We missed the Memphis and Nashville stops but got going on Wednesday [June 15] and headed over to Hoover, Alabama,” recalled Parker of the road trip he took with his buddy. “I had never seen anything like it before – people were on the side of the road watching everyone go by, sitting in the sweltering heat with umbrellas for shade.”

Fortunately, the ASC-built F100 had been outfitted with a killer air conditioning system from Vintage Air and it kept the guys nice and cool while the temperatures blazed outside. They ventured out into the sun to check out the other vehicles on the property, explore the massive vendor midway, and enjoy the atmosphere before returning to the safety of their Ford’s fairer climate. On Thursday, Parker and Conner packed up from their night in a hotel and entered the route to their next stop – Pensacola, Florida – into their GPS. “It was even hotter down there,” laughed Parker, who was pleased when he spotted tons of different cars and trucks from street rods to full-blown racecars. “We eventually just got in the truck and drove around to look at things from there instead.”

For the final day of the Hot Rod Power Tour, the trip led the men back to their home state of Georgia at Atlanta Motor Speedway on Friday, June 17. “Every time we got off the interstate, people and families and even old ladies would be sitting along the sides of the road watching and so excited to see us,” Parker added. The overall atmosphere of the event was one that Parker really loved, especially the old school camaraderie in the hotels at night where folks would sit with folding chairs in the parking lot just hanging out and talking about cars. Being with like-minded people and truly appreciating the passion behind the automotive culture is what hot rodding is truly all about.