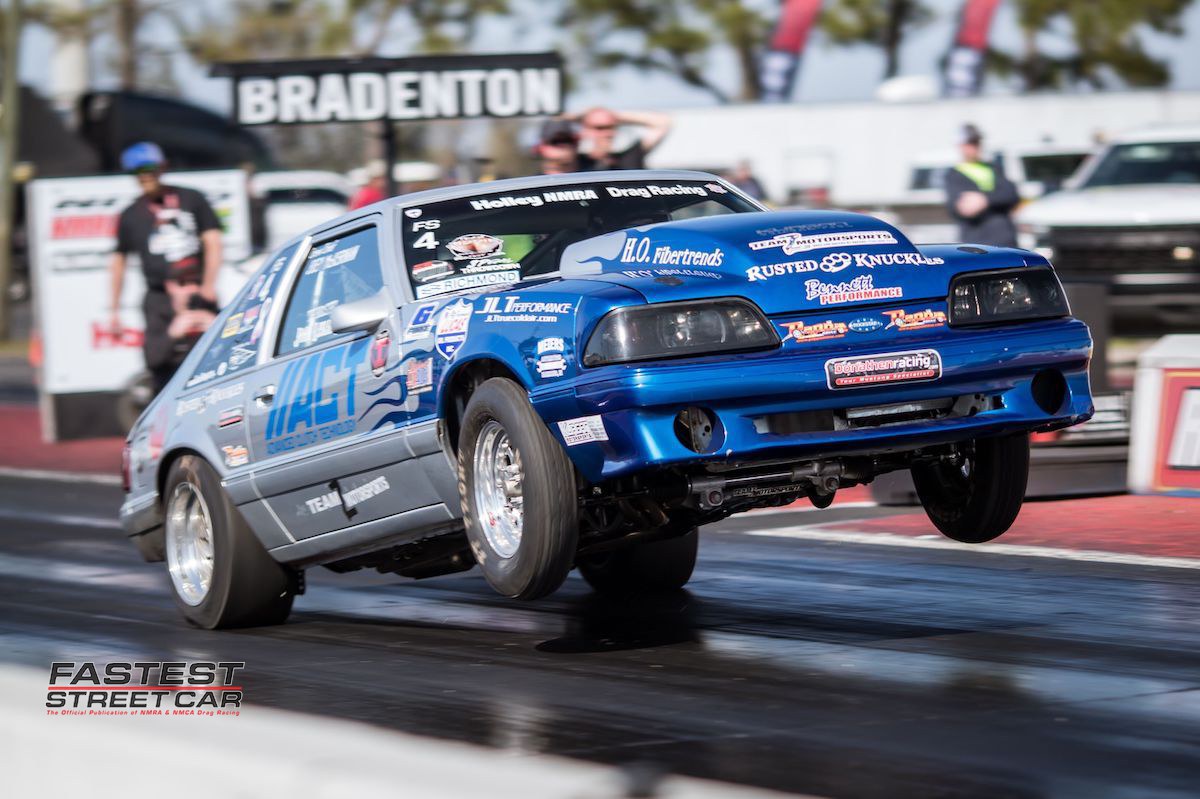 Interview by Mary Lendzion Photos by Fastest Street Car Staff From the time John Leslie Jr. began competing in NMRA Richmond Gear Factory Stock twenty years ago, he has had staunch support from his family and friends. They have cheered for him, crewed for him and campaigned for him. They have watched him pull wheelies and gears, and they have watched him put his car in the trailer after losing and in the Aerospace Components Winner's Circle after winning. Last year, they celebrated with him when he set the pace in qualifying with a 10.33, 10.27 and 10.12 at three races, and when he finished as the runner-up at one race and won three races. Then, at the NMRA All-Ford World Finals featuring the Holley Intergalactic Ford Festival in September at Beech Bend Raceway in Kentucky, when it looked as though he might capture his first Richmond Gear Factory Stock championship, they held their breath, and when he did capture it, they hoisted him. While Leslie Jr. admits that his status as reigning champion hasn't sunk in, he has a mix of gratitude and gumption going into the 2021 race season in his blue and silver Mustang made more muscular by a Coyote engine by MPR Racing Engines, G101-A by G-Force Racing Transmissions, ACT clutch, chassis and suspension by Team Z Motorsports and tuning by Bob Kurgan. He knows he'll have to move mountains in the monumentally competitive category to back up his championship, but he's giving it a go. Two additional goals include setting a record and securing a win at the NMRA/NMCA Super Bowl of Street Legal Drag Racing presented by HPJ Performance, May 13-16 at World Wide Technology Raceway in Illinois. Read on for more about the committed Leslie Jr., who is also a board operator at a BP refinery near his home in Indiana. 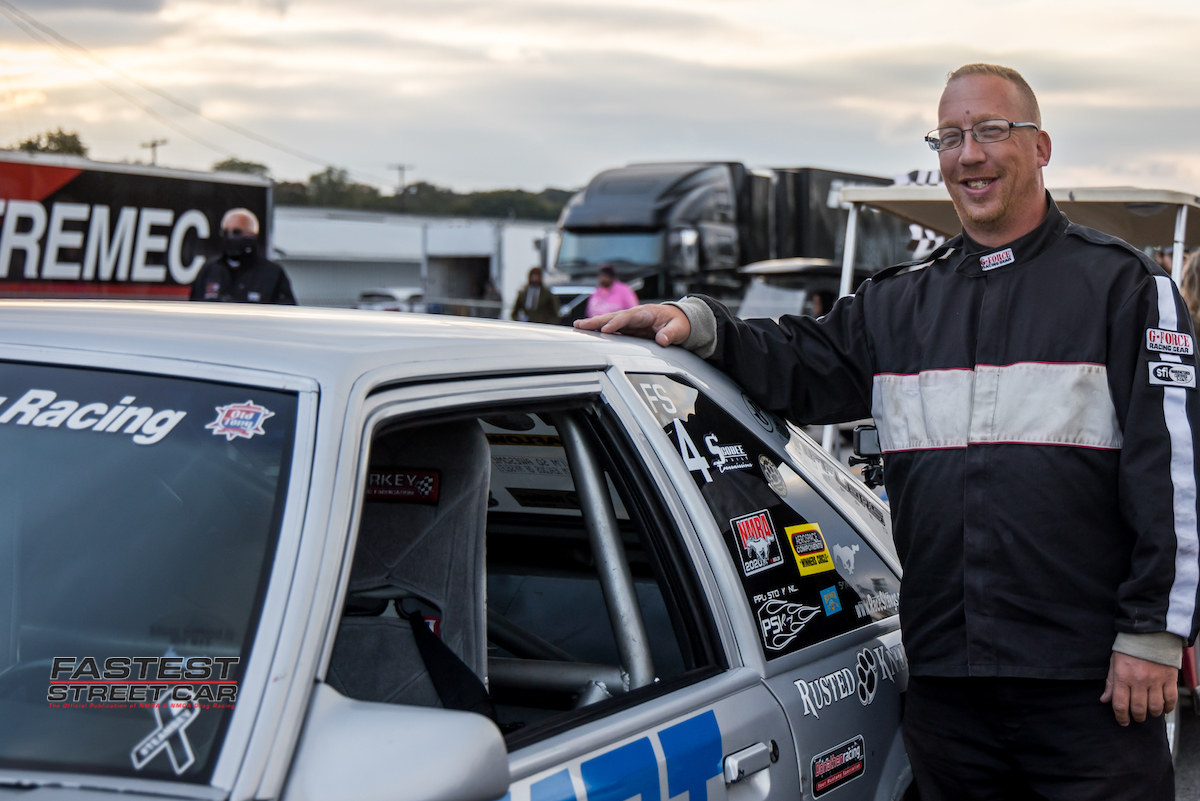 WHAT INSPIRED YOUR INTEREST IN RACING My dad, John Leslie Sr., raced when I was young, and that made me want to race. I did a little bit of street racing, and then I bracket raced for a while in my red Mustang. My friends were taking part in the World Ford Challenge, so I started doing that as well. Then, when two friends built a Hot Street Car, I wanted to race with them, so I grabbed the NMRA rule book and started looking, and when I saw Factory Stock, I liked it. Then I bought a truck and an open trailer to take my red Mustang to all of the races on the NMRA tour. HOW WOULD YOU SAY RICHMOND GEAR FACTORY STOCK HAS CHANGED THROUGH THE YEARS When we first started, the cars were running 13s and 14s. We had a Billy Glidden engine and a manual transmission. We've gone through different engines, but we've always had a manual transmission. I would say that the most noticeable changes in the class through the years have been the technology and the engine combinations. The class was dominated by pushrod engines because that's what all of the racers had, and then it had Two-Valve, Three-Valve and Four-Valve engines, and now it has Coyote engines. WILL YOU SHARE HOW IT CAME TO BE THAT YOU PARKED YOUR RED MUSTANG TO RACE THE BLUE AND SILVER MUSTANG John Tymensky and his son, Mike Tymensky, were preparing the car for Mike to drive, but unfortunately, Mike passed away in early 2010. A while later, John contacted me and said he was going to be bringing the car to the NMRA event at Beech Bend Raceway in Kentucky, and asked if I would drive it to make sure it's all set to sell to someone. I told him it would be an honor. The car had problems, and we spent the first day of the race trying to get it running. We qualified dead-last on Saturday, but then that night, we put the car on the dyno and found 60 horsepower. On Sunday, we made it to the final round, and we had a good chance of winning, but we broke the clutch. Later, John Tymensky told me that people had made offers to buy the car, but that he wanted me to buy it, and I did. In addition to buying the car, which had a Two-Valve engine and a Tremec TKO transmission, I also bought his enclosed trailer and four-wheeler. I was going to make upgrades to my red Mustang that winter, but instead, all of my focus went to the blue and silver Mustang. WHAT DID YOU HAVE TO DO TO IT TO MAKE IT RACE-READY It was pretty much ready to go. We just did minor things to it here and there. Then, we did a few more things to it over the years. We replaced the Two-Valve engine with a Coyote engine a few years ago, and we've used different internals in the rear end and different brakes. We replaced the Tremec TKO transmission with a G-Force Racing Transmissions G-101A. WAS IT COMPETITIVE RIGHT AWAY, OR DID IT TAKE TIME It was competitive right away. Once we got it tuned that night at the race at Beech Bend Raceway, we were just as fast as the number one guy, and that definitely gave me confidence, but there was still a lot to learn about the car. 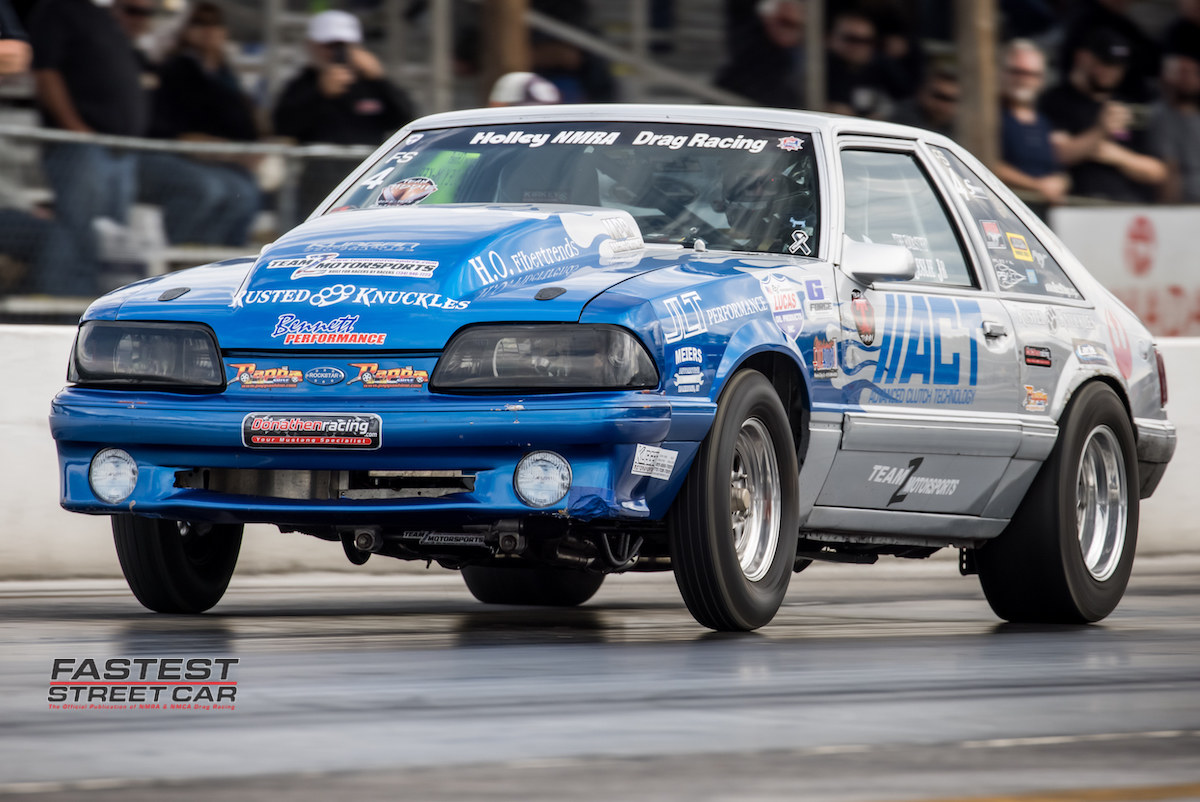 WE WERE HAPPY TO SEE YOUR FATHER, JOHN LESLIE SR., CLIMB INTO YOUR RED MUSTANG. Because the red Mustang was still a decent runner, I didn't want it to just sit, so I put my dad in it for the NMRA race at Route 66 Raceway in Illinois in 2011. There was a learning curve for him, but he loved it. That was the first time we had raced together, and he made it to the semifinal and I won the Super Bowl. It was so cool. The only problem we had is we only had one truck and trailer, so we only brought the red Mustang to the races at Route 66 because it was local to us. I would like to get it back out so that my dad can drive it again. I just need more time. All of the wiring has been stripped out of it so that we can put a Spaghetti Menders wiring kit in it, and we have to redo the fuel and brake lines, drop a drivetrain in and test. One thing is for sure, and that is that it will have a Coyote engine from MPR Racing Engines and a G101-A from G-Force Racing Transmissions. WHAT DOES IT TAKE TO BE COMPETITIVE IN RICHMOND GEAR FACTORY STOCK You have to keep up with changes to the rules, and find extra horsepower, and that can make the class even tougher. I did that with my red Mustang, which had a pushrod engine, and I'm doing it now with my blue and silver Mustang, which has a Coyote engine. You have to make the chassis, suspension, manual transmission and tune-up work together. Every one of those is a significant part itself, but you have to make them work together to have any chance at success in the class. I could have the best engine in the class, but if I don't have the chassis, suspension and tune-up working right, the engine won't matter. Last year, I had a great engine from MPR, and a great tune-up from Bob Kurgan, and I was part of Team Tiddie, and Eddie Bennett, of Team Tiddie, handled the clutch set-up and chassis in my car, and made the calls on that. He would watch cars go down track before it was our turn to go down track, and he would make whatever adjustments he felt we needed to make. That had a huge impact on my racing. Eddie has taught me what to look for in the data after every pass. WHAT S INVOLVED WITH GETTING THE CLUTCH SET UP PERFECTLY Fortunately, our ACT clutch is easy to use. We don't have to make many changes at the track, and we don't have to change it very often. We were always under the car making adjustments, but now I run a simple friction disc and pressure plate, and that means I don't have to spend time pulling my transmission and making adjustments. AFTER YEARS OF WATCHING YOU ROW GEARS, WE LL ADMIT THAT WE CAN T SEE YOU MOVNIG FROM A MANUAL TRANSMISSION TO AN AUTOMATIC TRANSMISSION. I feel that if you can get everything right, and you know how to set up a clutch and suspension, stick cars can be faster. Besides that, I've just never been an automatic guy, and I don't regret that, even when I put the car on the bumper. AT THE END OF THE YEAR, YOU POSTED PERSONAL BESTS OF 10.10 IN TESTING AND 10.12 AT THE RACE IN KENTUCKY. WHAT WENT THROUGH YOUR HEAD WHEN YOU SAW THE TIME SLIPS We had some problems at the beginning of 2020, but as the season went on, we were getting quicker, whether it was in the 60-foot, eighth-mile or quarter-mile, almost every time we took the car out last year. It was amazing, and we were very excited. 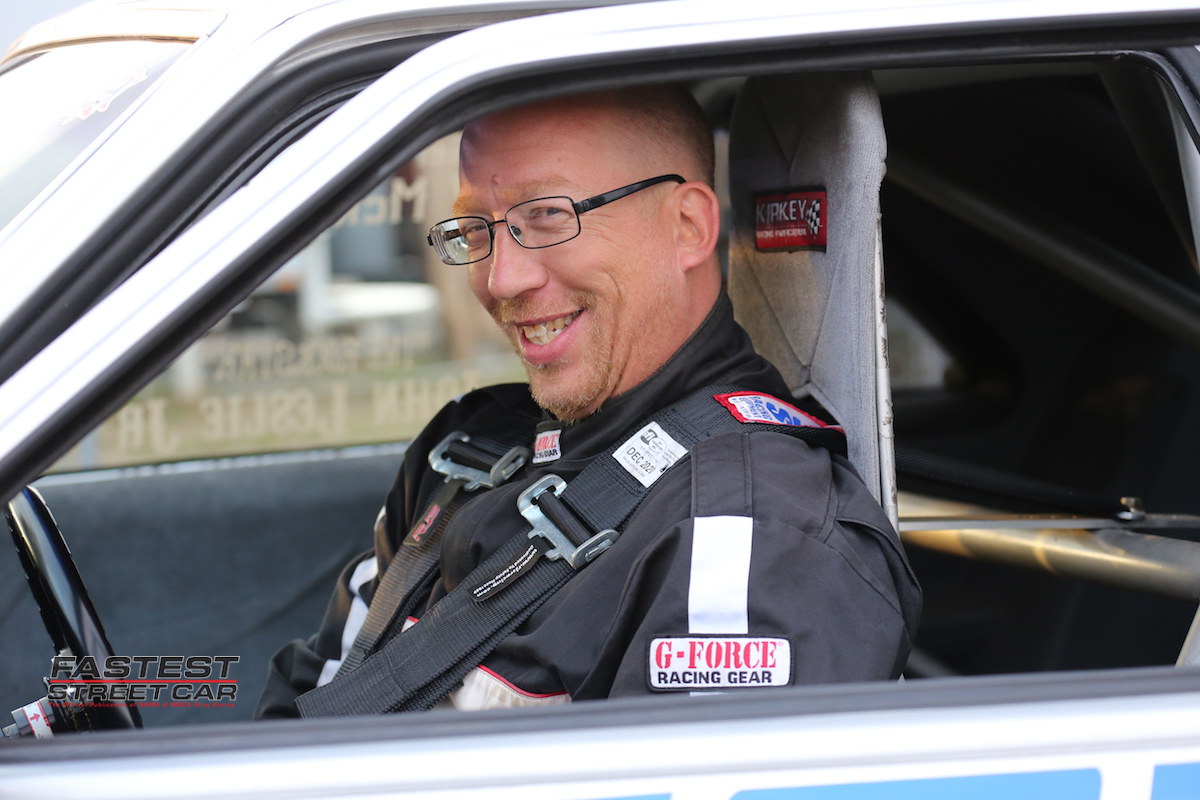 YOU HAD COME SO CLOSE TO EARNING A CHAMPIONSHIP A COUPLE TIMES. WHAT DID IT MEAN TO YOU TO ACCOMPLISH THAT IN 2020 It hasn't really sunk in yet, even when someone calls me Champ, but it's amazing. I had worked for it and strived for it for twenty years. People used to ask me when I would move to a different class, and I would say that I would think about it when I earned a championship, but now that I have earned a championship in Factory Stock, I want to defend it. On top of that, I just really like the class, and want to stick with it. YOUR FAMILY AND FRIENDS SUPPORT YOUR RACING 100 PERCENT, AND THEY RE YOUR BIGGEST FANS. IS IT SAFE TO SAY THAT THEY RE AS HAPPY ABOUT YOUR SUCCESS AS YOU ARE Yes. I do think they're as happy as I am, and I think the championship was as big of an accomplishment for them as it was for me and my crew chief, Joey McKernan. They have seen me struggle, and honestly, when I earned the championship, it was as if they were in the car with me. It was so cool to have them at the last event of the year. My former crew chief, Tony Meier Jr. and my friends, Dan Garcia and Dustin Olson, who's a country singer in Nashville, were even there. It meant a lot to me. I had so much help from Tim Eichhorn of MPR Racing Engines, who is the most badass engine builder there is. He and his team, including his son, Tyler, know how to build Coyote engines. I also had so much help from Team Z, ACT Clutch Technology, Bob Kurgan and Eddie Bennett. WHAT WORK IS BEING DONE TO THE CAR OVER WINTER We have two upgrades. We're getting a new Coyote engine from MPR Racing Engines, and we're having our chassis revamped with an 8.50-certified cage by Team Z Motorsports. We're really looking forward to racing in 2021. (Interview from the April issue of Fastest Street Car) 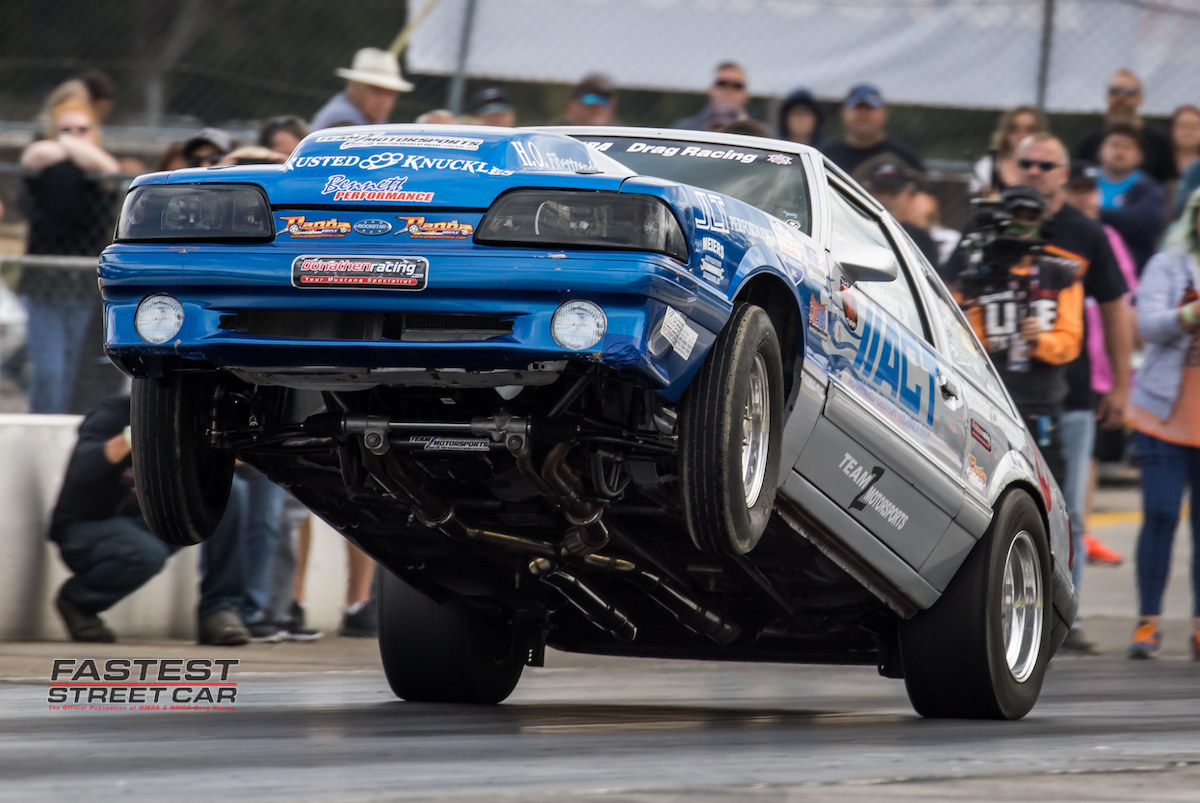