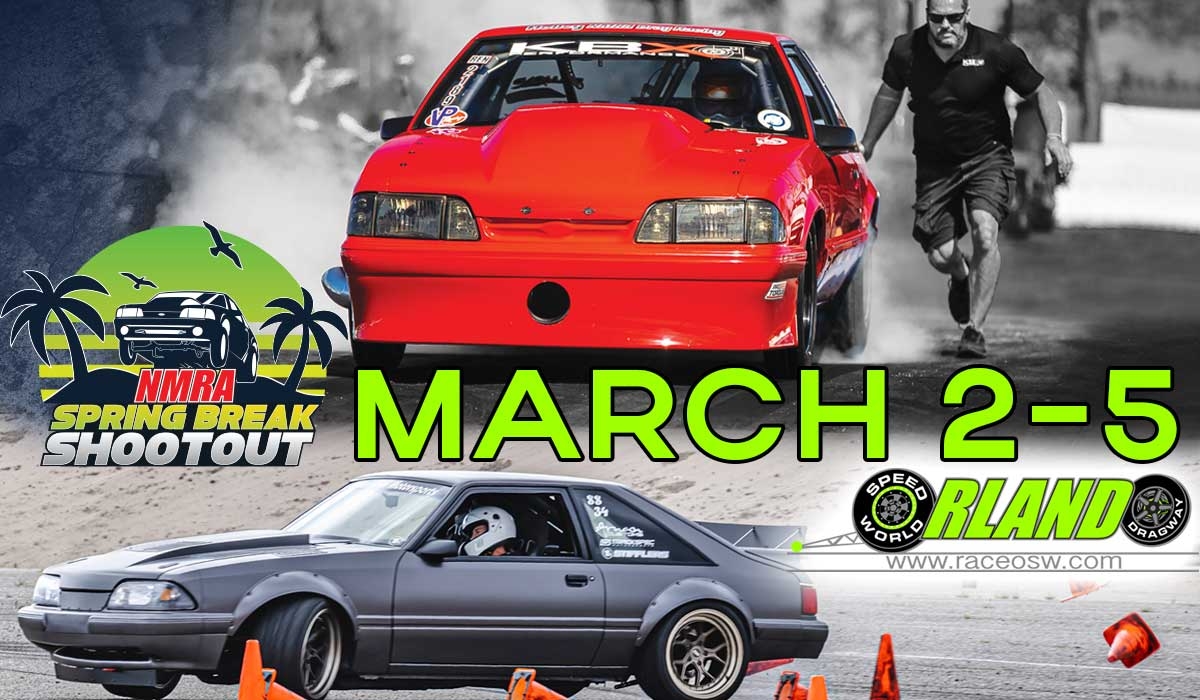 As the Holley NMRA Ford Nationals embarks on its 25th anniversary, the series shifts its iconic Spring Break Shootout season opener to Orlando Speed World in 2023, diversifying the event with even more Blue Oval action.

“It’s become clear that modern Ford fans demand motorsport variety, and we plan to celebrate NMRA’s 25th-anniversary tour by bringing the festival atmosphere of our World Finals to the season opener in Orlando, Florida,” explains Steve Wolcott, Founder & CEO of NMRA. “Our fans love drag racing, but we need to offer even more motorsport action around the event. Our move to OSW opens the door to the most exciting Spring Break Shootout yet!”

In addition to NMRA Ford drag racing action on the quarter-mile at Orlando Speed World, the facility’s oval track area allows for a host of other activities, including Australian-style burnout contests, an autocross competition, drift exhibitions, and much more.

“We keep improving our multi-use facility to make way for events like NMRA to come to Orlando…” said Ozzy Moya, owner of Orlando Speed World. “We have a popular quarter-mile drag strip and our oval track has been used for sprint car racing and has been home to Formula Drift for the last six years. We’ve done concerts in the oval, and we’ve done a lot of different stuff over there, opening the avenue for future endeavors.”

As home to some of the longest-running door-slammer events in the country, OSW is ready to host NMRA drag racing again for the first time in decades. With heads-up drag racing, index classes, True Street action, a huge UPR Products All-Ford car show, a massive manufacturer’s midway, a used-parts swap meet, and several new offerings, the NMRA season opener is set for a triumphant return to Orlando.

“Since I purchased Orlando, it’s one of the events I wanted to see come back,” said Moya. “NMRA raced here in 2001 and to see the series return to where it all started is pretty cool.”

“We can’t wait to bring our NMRA Spring Break Shootout to Orlando Speed World,” said Rollie Miller, ProMedia General Manager and National Event Director. “Ozzy and his team at OSW are invested in growing and promoting motorsport events at a facility that is primed to increase our NMRA motorsport offerings.”

About NMRA
Brought to you by Holley Performance Products, the NMRA Ford Nationals is known as the largest all-Ford motorsport event series. It hosts championship drag racing from wild 275 Outlaw Radial racecars to heads-up classes with G-Force Racing Transmissions Coyote Stock and Richmond Gear Factory Stock. It is also home to one of the most competitive Index segments in all of drag racing with ARP Open Comp, Detroit Locker Truck & Lightning, Exedy Racing Clutch Modular Muscle, and much more. Street cars have a large home in the NMRA Ford Nationals with the legacy category True Street contested at every event, considered the longest-running street car class of all time, and the new SunCoast Performance 8.60 Street Race eliminator, held at select events. If showing off your Mustang or Ford is more your style, the UPR Products Car Show is one of the largest and most fun car shows of the year. Every national event features a Manufacturer’s Midway with the biggest names in the aftermarket, offering show specials and a chance to talk to company representatives one-on-one. For more information on the Holley NMRA Ford Nationals, visit NMRAdigital.com.