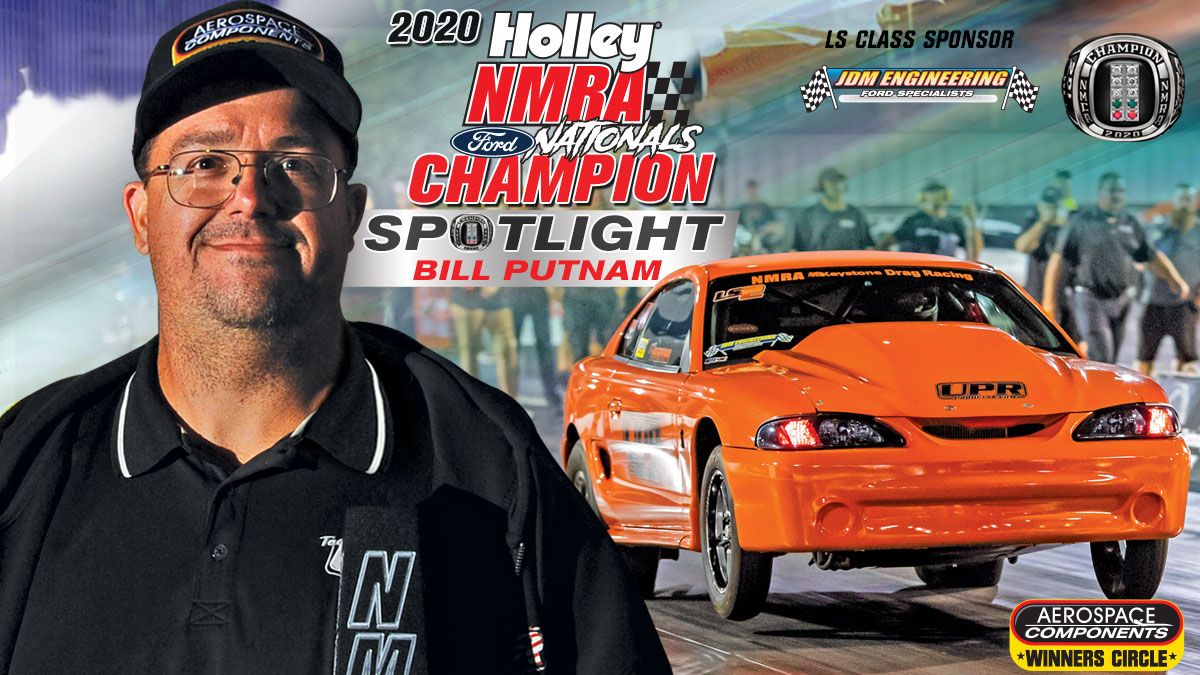 By Mary Lendzion After securing a second-place finish in NMRA JDM Engineering Limited Street last year, Bill Putnam announced his plans to pursue a championship in the category this year. And, he and his Mustang were well-prepared with a commanding combination consisting of a Coyote engine by MPR Racing Engines, VMP Gen 3 supercharger, Turbo 400 by Gates Transmission and UPR Products suspension. With Jim LaRocca laying tunes with Holley EFI, Putnam put his race season in gear by qualifying in the sixth spot with an 8.57 and advancing to the Aerospace Components Winner's Circle with an 8.71 at the 26th Annual Nitto NMRA Spring Break Shootout, which was Feb. 27-March 1 at Bradenton Motorsports Park in Florida. Our season opener in Bradenton started pretty rough with a transmission failure in qualifying, but with help from other racers, we pieced together a transmission that got us through eliminations and the event win, said Putnam, a shop manager for UPR Products in Florida. He went on to qualify in the second spot with an 8.69 and another win, this time with an 8.70, at the 12th Annual Scoggin-Dickey Parts Center NMRA/NMCA All-Star Nationals in June at Atlanta Dragway. By the time Atlanta came about, Jim LaRocca had the tune dialed in and things started to work seamlessly, said Putnam. We weren't swinging for the fences. We were just staying in the top-half of the field, going rounds and not breaking parts. 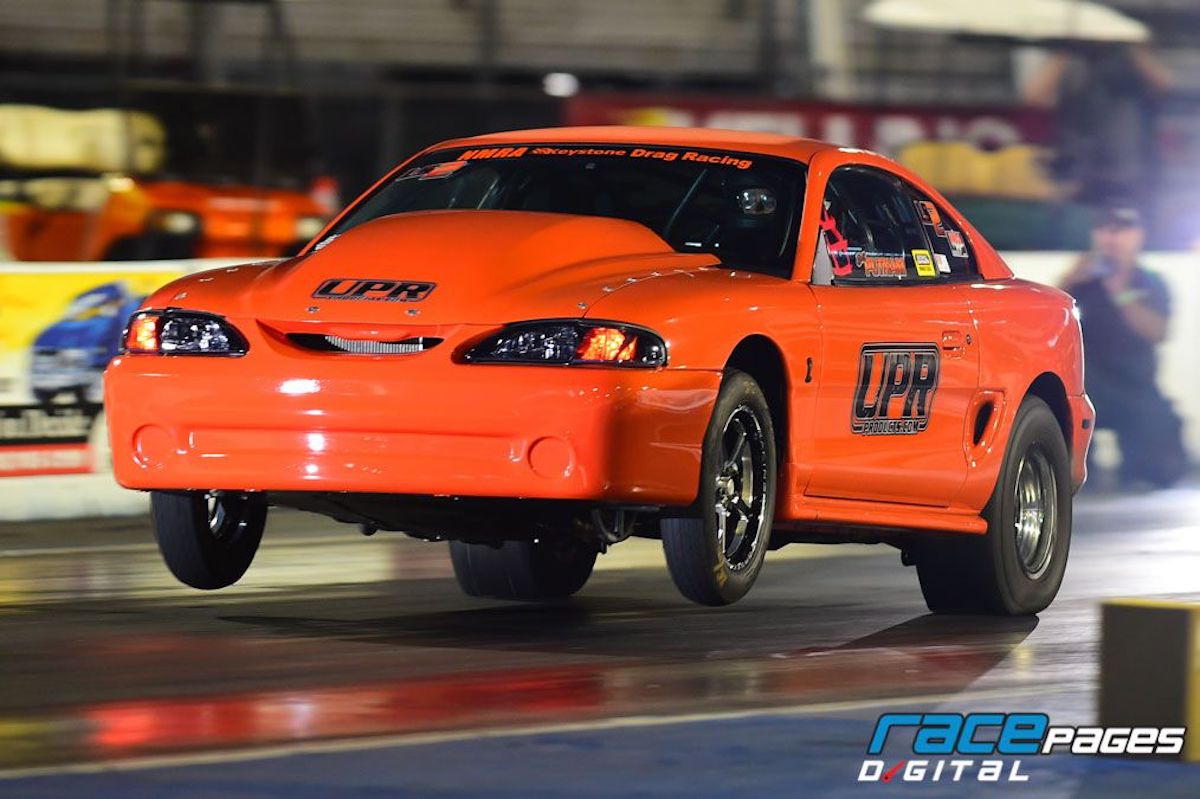 Putnam proceeded to qualify in the second spot with an 8.58, and despite a broken throttle cable in the semifinal round of eliminations that needed to be replaced, he went on to earn his third win in a row, this time with an ever quicker 8.63, at the Nitto Tire NMRA/NMCA Super Bowl presented by HPJ Performance in early August at World Wide Technology Raceway in Illinois. By that point, we had time to focus our efforts on the bottom-half numbers, said Putnam. Showing no signs on stopping, Putnam set the pace in qualifying with an 8.60 and pulled off yet another win with an 8.51 at the Arrington Performance NMRA/NMCA All-American Nationals presented by Force Engineering in late August at U.S. 131 Motorsports Park in Michigan. As a bonus, he also left the event in the Great Lakes State holding JDM Engineering Limited Street records with an 8.512 and 161.58 mph. We picked up a few numbers down low, and that give us a small advantage at the top of the field, said Putnam. Enthusiastic about putting the exclamation mark on his very strong season of racing, Putnam pulled into the final NMRA event on this year's tour, the NMRA All-Ford World Finals featuring the Holley Intergalactic Ford Festival, in late September at Beech Bend Raceway in Kentucky. There, he set the pace in qualifying with an 8.30, soared to his fifth event win in a row with an 8.33 and wrapped up the 2020 JDM Engineering Limited Street championship. Having been around NMRA and Fun Ford Weekend events since the late 1990s, and having watched people I've read about and friends win championships, it has been a very surreal experience to have earned my first championship, said Putnam. There's a great sense of pride with being able to bring an NMRA championship to UPR after a number of years of not competing in heads-up racing. While the Coronavirus pandemic prevented NMRA from having its annual ceremony to celebrate champions, each was invited to share the words they would have shared on stage in front of their fellow racers, family and friends. 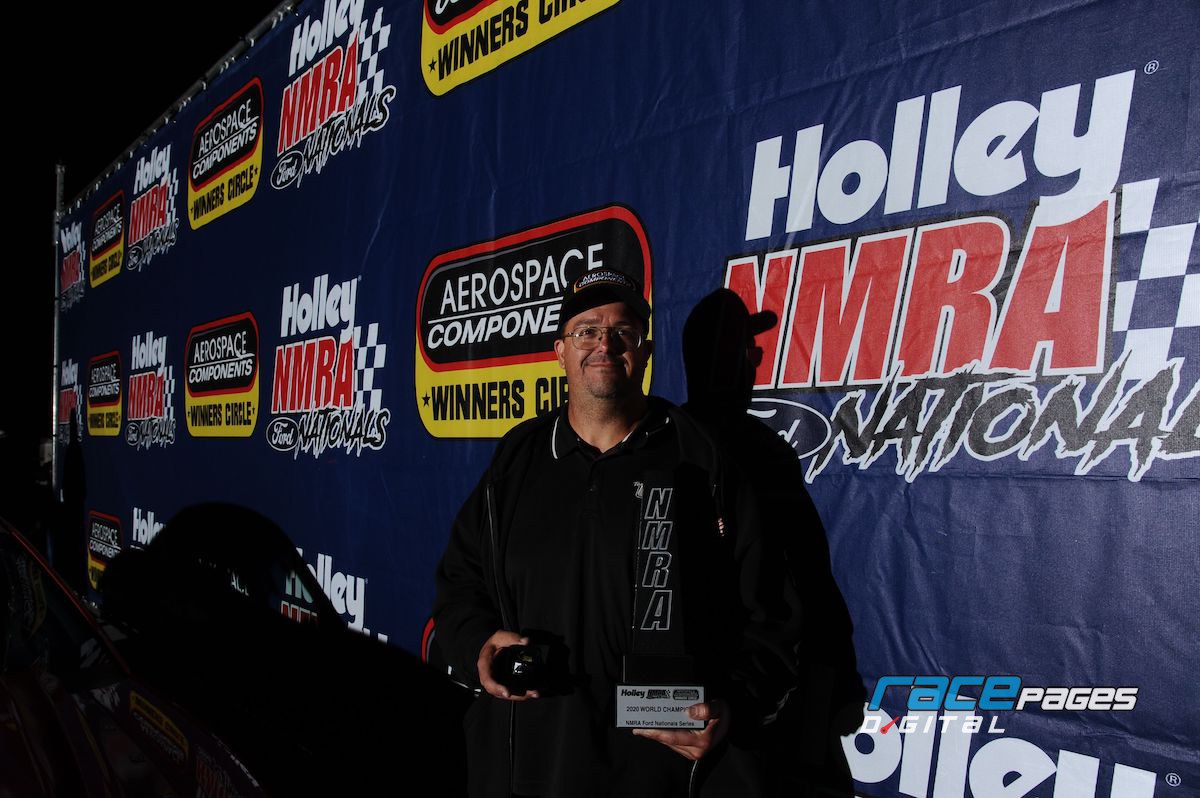 HOW DOES IT FEEL TO HAVE EARNED A CHAMPIONSHIP DURING SUCH AN UNUSUAL SEASON Winning the championship this season was an amazing feeling after the breakage we battled with the car in 2019. To see it all come together in such a crazy year, with so much uncertainty, really was a roller coaster of up and downs. WHAT WAS THE BIGGEST CHALLENGE YOU OVERCAME ON YOUR WAY TO EARNING THE CHAMPIONSHIP Getting the car consistent by keeping the car in one piece for more than one race was by far the biggest hurdle we had to overcome. New car bugs took a while to work out, and when you are fixing or upgrading between every event, there is no time to improve what you have. Being able to test between events was everything. WHICH FAMILY MEMBERS AND FRIENDS WOULD YOU LIKE TO THANK FOR SUPPORTING YOU ALONG THE WAY I want to thank everyone involved in making this year happen. We have a solid core team that put this all together, starting with Mark Mainiero, Jim LaRocca and infamous tire pressure checker Sharad Raldiris. Although not at the track with us, Joe Mainiero also has supported our efforts. I want to thank my parents and sister for supporting me and watching things back home while I'm away at the events. Having tropical storms and hurricanes in the area while being away isn't easy to deal with, and they keep me updated and take care of things when needed. WHICH SPONSORS WOULD YOU LIKE TO ACKNOWLEDGE We have great companies behind us and supporting us along the way, including UPR Products, of course, as they are the main force behind the car, and we use every suspension part we make to get such a heavy car to 60-foot among the top of the class. I also want to thank long-time friend David Dodge of Tig Vision Race Fabrications for the chassis that keeps me safe and the car so consistent, Race Part Solutions and John and Darrin for always helping out when they can and getting me components we need to make everything work together. I can't finish this without thanking Jim LaRocca, who tunes and gives us invaluable feedback on the car set-up, cams, etc. It's great to work with a legend in the Mustang community. Also, MPR Racing Engines, MFP Australia, Ultimate Converter, VMP Performance, Weldon Pump, Aerospace Components, Mickey Thompson, Billet Pro Shop and Viking Performance. WHAT DO YOU ENJOY ABOUT RACING IN NMRA JDM ENGINEERING LIMITED STREET NMRA Limited Street is just such a diverse class. So many combinations and the racers come from all kinds of different racing back grounds. It's a great group of people to race with and also have a good laugh with from time to time. 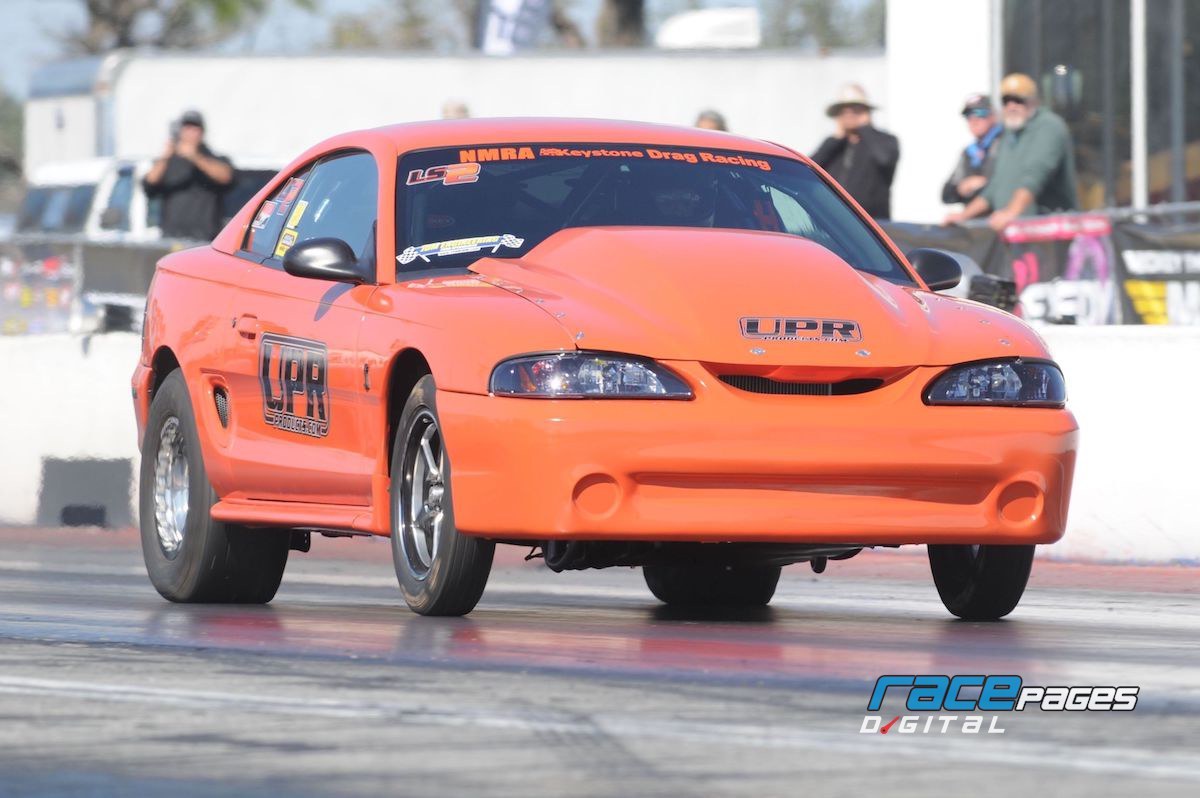