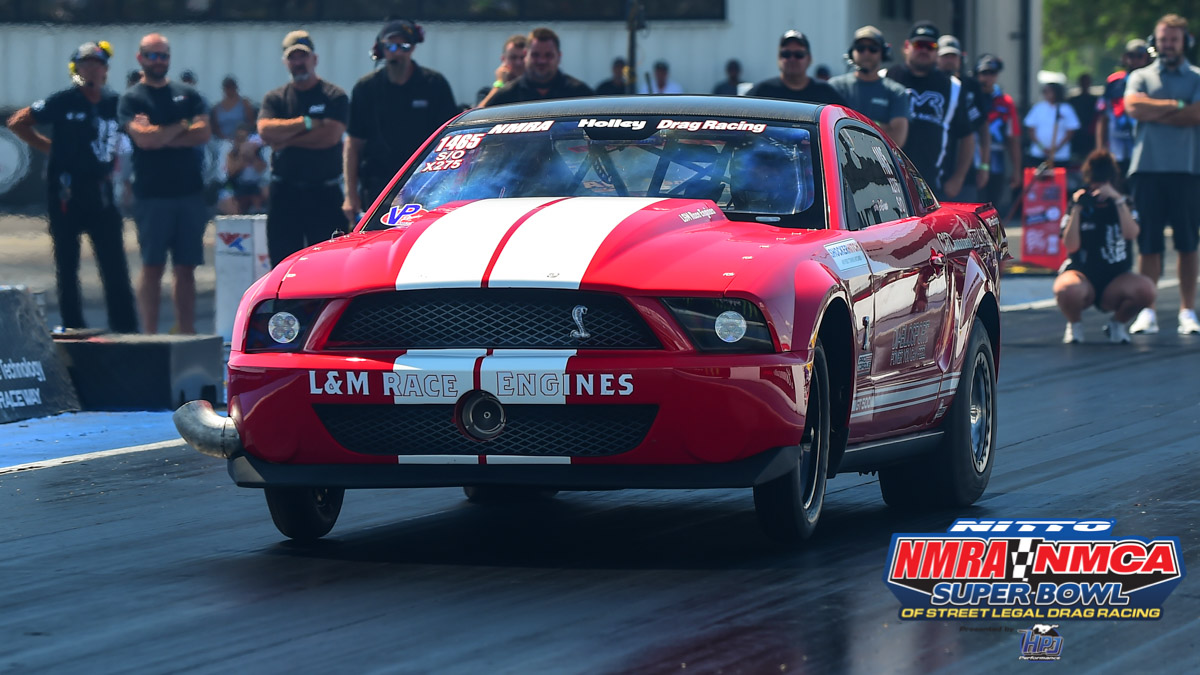 2020 ushered in a world of changes for everyone, and one such change was the move of the Nitto Tire NMRA/NMCA Super Bowl of Street Legal Drag Racing presented by HPJ Performance to the St. Louis area. After 14 years in Joliet, the event moved to World Wide Technology Raceway at Gateway in nearby Madison, Illinois, where a long-standing tradition of Ford racing continued with the 15th Annual Super Bowl event. And despite a persistently poor weather forecast, spectators enjoyed a safe and socially distanced event, while racers sped to the Aerospace Components Winner's Circle. In the combined NMRA and NMCA VP Racing Madditives/Mickey Thompson Street Outlaw category, Dom DiDonato took the top spot in qualifying with a 4.32, and Tony Hobson was hot on his heels with a 4.36. The pair of Mustangs waded through the 13-car field and the number one and two qualifiers were the last men standing. With identical .087-second reaction times, both drivers left evenly, but Hobson encountered issues early in his run, leaving DiDonato to speed away with a winning elapsed time of 4.810. At this event, the NMRA Edelbrock Renegade and NMCA Xtreme Street classes are combined for a battle of brand supremacy. Be it NMRA or NMCA, Mustangs reigned supreme in this category, with Joel Greathouse and his Fox-Body Mustang facing Tim Knieriem and his SN95 Mustang in a turbo-vs.-nitrous confrontation. Knieriem took the starting-line advantage, but that and his 4.731 effort weren't enough to finish ahead of Greathouse and his 4.690 run. Leading the points race going into the Super Bowl event, Bill Putnam wound up second in qualifying behind Samantha Moore, who dropped an 8.57 to take top honors on Saturday in JDM Engineering Limited Street. The two drivers went through three rounds of eliminations to meet each other for the finals and it was a stunner. Putnam posted a .062 reaction time to Moore's .125, and the difference allowed his slower 8.63 to take the win over Moore's quicker 8.62 run. 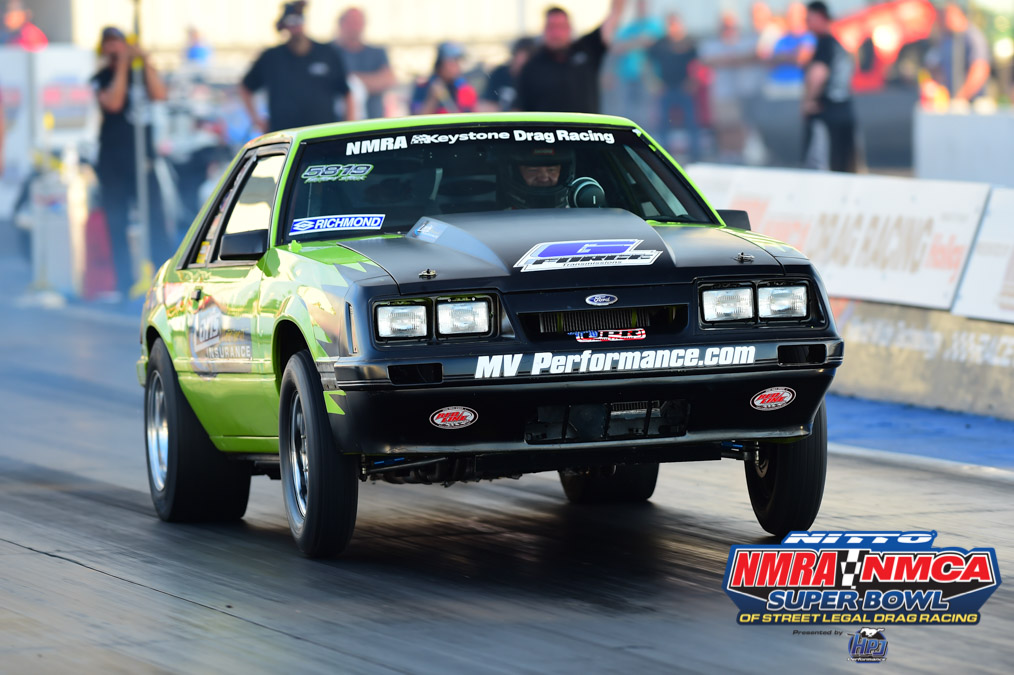 Richmond Gear Factory Stock'veteran John Leslie Jr. took the number-one qualifying spot on Saturday night, and he went through Bryan Gardner on his way to the final round where he squared off against Mark Anderson. When the lights came down, it was Anderson who was quicker on the tree and quicker at the stripe for a 10.24-to-10.37 win and a trip to the Aerospace Components Winner's Circle. The high-flying, stick-shift antics that you see in G-Force Racing Transmissions Coyote Stock never disappoints, and Michigan's Frank Paultanis is on a tear this year, holding a commanding lead over Nathan Stymiest in the points race. Just as in the previous race in Commerce, it was Paultanis vs. Stymiest in the final round, with Paultanis driving to a winning 10.21 over Stymiest's 10.42. Exedy Racing Clutch Modular Muscle is full of top-notch racers and there were 18 contestants at this year's Super Bowl event. Jason Henson advanced his championship points lead after driving through five rounds of eliminations and defeating number two in points, Shane Williams, when Williams broke out in the final round. 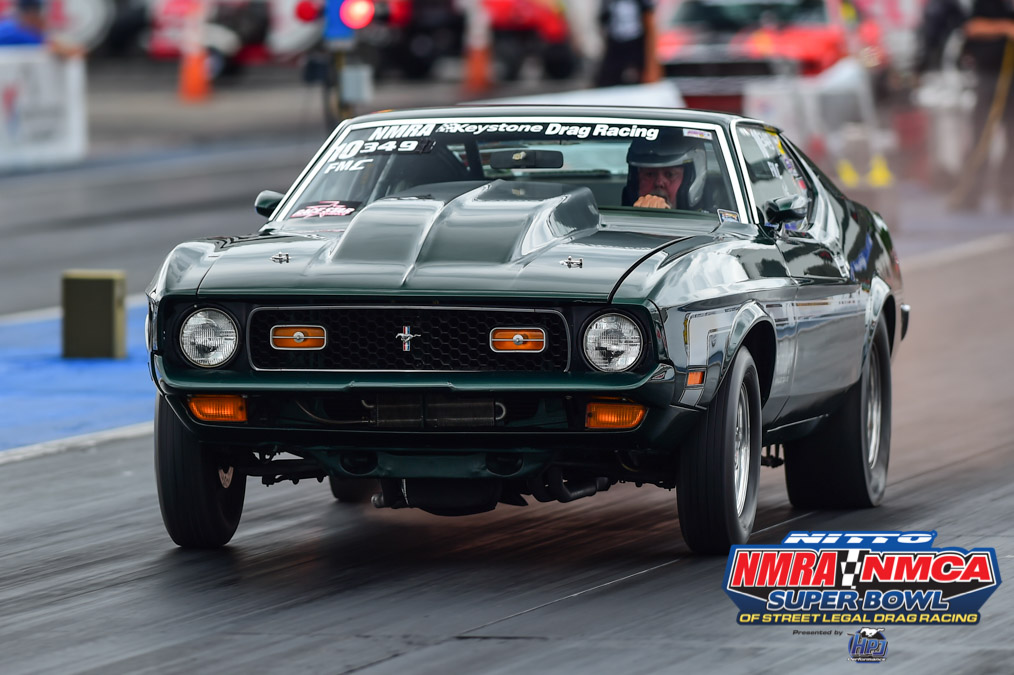 In FSC Ford Muscle competition, twelve racers faced off in the index/bracket category. The Aerospace Components Winner's Circle awaited the driver who would be victorious in the final round, and Clyde Dunphy and his 1972 Mustang grabbed the win in the double-breakout round over Danny Towe. Looking to add another ROUSH Performance Super Stang championship to his list of accomplishments is Lexington, Illinois Marvin Knack. At the wheel of his 2011 Mustang, Knack fought his way to the final round of competition and proceeded to drill points leader Larry Firestone on the tree and forced him to break out to secure the Super Stang win. 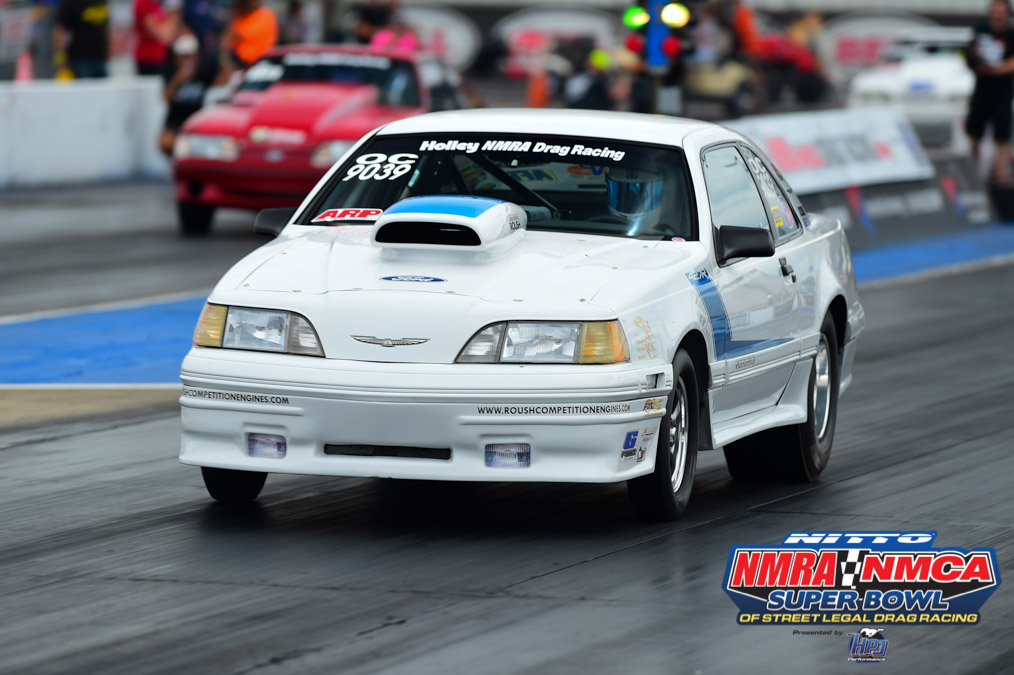 ARP Open Comp is one of the toughest NMRA classes to compete in, and racers often go deep in the rounds due to the number of competitors. In the final round of competition, Gordon Harlow collected the better reaction time, but Dennis Corn in his stick-shifted Ford Thunderbird pushed the Mustang driver deep at the stripe, with Harlow's breakout turning the win light on in Corn's lane. The tough Detroit Locker Truck & Lightning class is full of top-notch racers and the final round came down to the number one and two points place holders. Bob Dill, leading the championship currently, squared off against Keith Chobirko in the final round of competition, and the battle was over at the first strike as Chobirko turned on the red light, which provided Dill an easy path to the Aerospace Components Winner's Circle. For 2020, the Eaton TVS Supercharger Throwdown moved to the Super Bowl in St. Louis and the competition was modified as well, with racers taking on a True Street-style competition on Saturday to set the 4-car, heads-up field for Sunday. Jason Wagoner took the win on Saturday with a 9.084 average, while Chad Walter took the runner-up honors at 10.065 seconds. Oscar Morin grabbed the 10-second award with a 10.076 average, and Kevin McKenna took home the 11-second win with a11.051 average. On Sunday, the Quick 4 was whittled down to Oscar Morin and Chad Walter in a Mustang vs. Camaro battle. Morin cut the down tree hard and charged to a 9.18 for the win over Walter's 9.69. 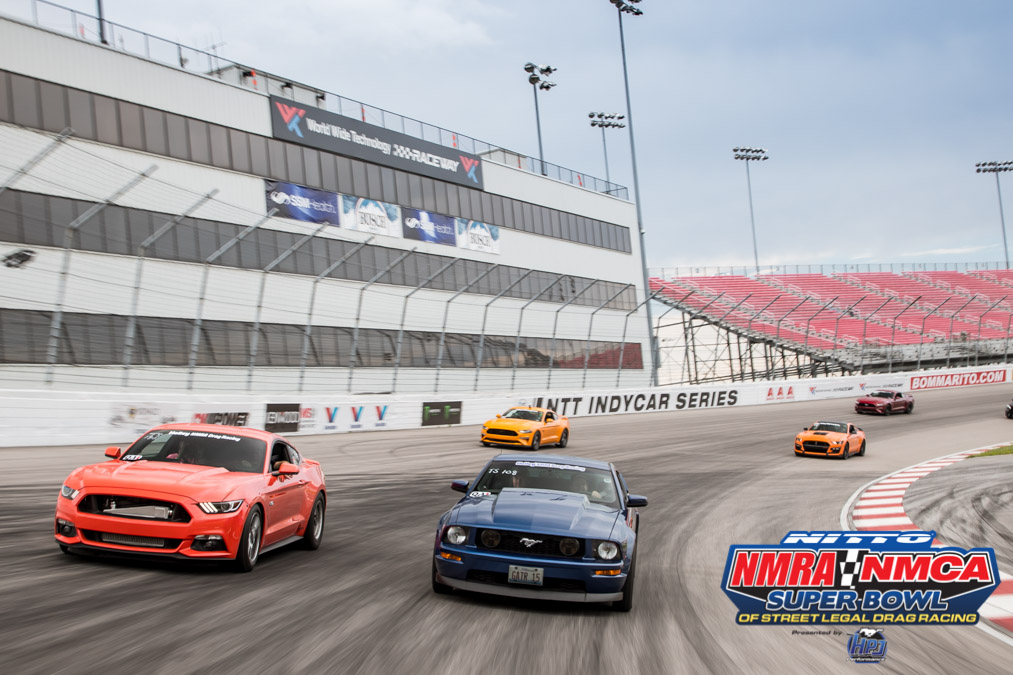 As the second combined event of the year, the Super Bowl pools together the both QA1 and TorqStorm Superchargers True Street racers and at World Wide Technology Raceway, competitors got to perform the class obligatory cruise around the 1.25-mile oval. After the racers made their three runs, QA1 True Street Veteran and frequent champion Randy Thomas took the overall with an 8.749 -second average. Mike Niehaus in his stick-shifted 86 Mustang GT took runner up honors with a personal best 8.870 average, while Daniel Rosner picked up the 9-second win with a 9.097 average. Scott Oshinski drove to the 10-second win, Cody Poston grabbed the 11-second spot, and Bryan Newburn was awarded the 12-second prize. Paul Lewis went 13.034 to take home the 13-second win, Edwin Schoenfeld rode his SVT Lightning to the 14-second place, and ever the master of the 15-second category, Rodney Ward picked up the final prize in QA1 True Street with his Ford Fusion Sport. In the True Street Bracket, it was the 2019 Dodge Challenger of Alan Scanlan squaring off against the bad-in-black Buick Grand National of Bob Hoffman in the final round, with Scanlan drilling Hoffman to the Christmas tree and taking the win light at the top end. The Super Bowl of Street Legal Drag Racing is always a great treat for fans and racers alike. Continuing with four straight wins and extending their overall lead to 11-4, the NMRA racers defeated the NMCA's best, 7 races to 4. The NMRA Holley Drag Racing Series continues the Arrington Performance NMRA/NMCA All-American Nationals presented by Force Engineering with the Chevrolet Performance Challenge Series at US 131 Motorsports Park in Martin, Michigan, August 27-30, 2020.
HPJ Performance
,
Nitto Tire
,
NMRA/NMCA Super Bowl of Street Legal Drag Racing
,
World Wide Technology Raceway at Gateway