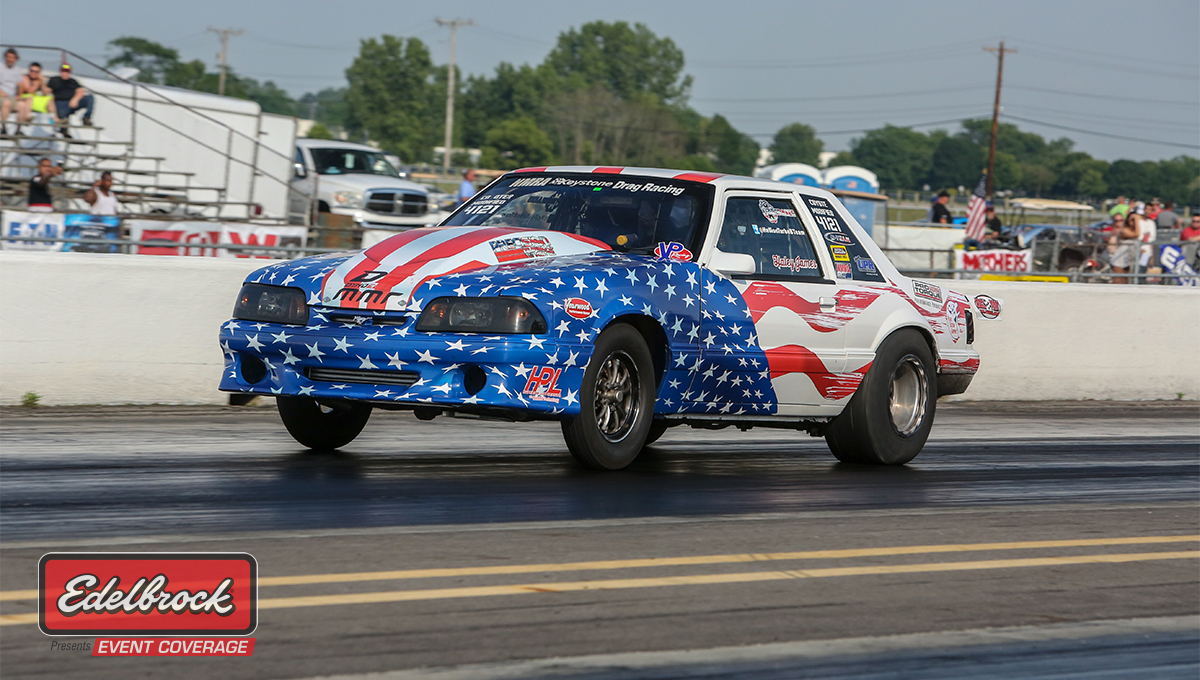 The NMRA Drag Racing Series presented by Keystone Automotive kicked off the second half of a six-race series with the 15th Annual NMRA Ford Super Nationals, June 7-10 at National Trail Raceway. The crowd of racers and fans dealt with weather late in the day on Friday and Saturday, but cooperation got the program completed in its entirety. NMRA officials made the call to run three rounds of qualifying on Saturday and then began eliminations on Saturday night. One round of index categories was completed, as well as a couple of a heads-up categories, before the rain came. Sunday was clean-up day, but the shortened program didn't affect the exciting and dramatic day of competition. In VP Racing Fuels Street Outlaw, Andy Manson was looking to secure his fourth-straight, final-round appearance in 2018. He slid into the field with a 4.439 at 167.55 mph, which was just .001-second slower than the top qualifier, Manny Buginga, who posted a 4.438 at 165.56 mph. Manson defeated John Urist in the semifinals on his way to the final round with low ET of the meet, a 4.402 at 167.09 mph, while Urist posted a 4.451 at 166.19 mph. Buginga advanced past Nick Bacalis with no results due to a computer malfunction. In the final, Manson unleashed a 4.437 at 167.36 mph to top Buginga's 4.484 at 165.46mph effort. 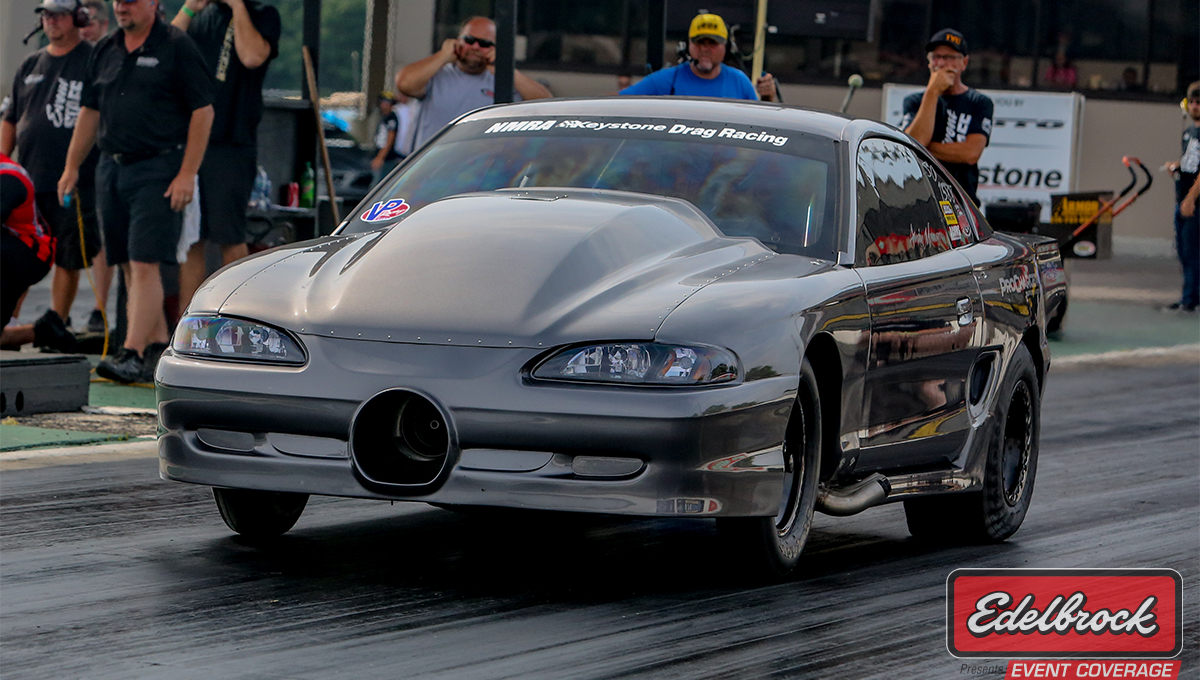 The Edelbrock Renegade category had a bunch of turbocharged cars ganging up on a couple of supercharged entries. Brian Mitchell found himself as the number-one qualifier once again thanks to a 7.465 at 183.09mph run in Adam Arndt's Mustang. After a bye-run in the first round, he faced Tony Hobson in round two. Mitchell drove into the final with a 7.472 at 183.29 mph. He ran unopposed when Frank Varela had issues on the starting line and timed out. It is Mitchell's first trip to the Aerospace Components Winner's Circle in 2018. Daniel Pachar pulled off a 7.771 to lead ProCharger Coyote Modified qualifying, but hot on his heels was Haley James with a 7.779 hit. James, who came to this race as the points leader was as cool, calm, and collected as could be on her way to the final, where she broke the beams to earn the win when her opponent wasn't present. Steeda Limited Street, a new category that has been steadily picking up steam, saw Michael Ciborowski catch an 8.74 to lead qualifying, and he made it to the final where he faced Sondra Leslie, who's been on a hot streak. It was anybody's race as the tree dropped, but Ciborowski got to the stripe first and won with an 8.72 to Leslie's close 8.81.

Despite wild wheelies, Charlie Booze Jr. blasted to a 10.36 to lead qualifying in G-Force Racing Transmissions Coyote Stock, but when the dust settled, it was Darin Hendricks and Tim Matherly in the final. After recording comparable reaction times, Hendricks hauled to the win with a 10.40 to Matherly's 10.46. Focused on holding onto his lead in Richmond Gear Factory Stock points, Dan Ryntz drove to a 10.49 to set the pace and went on to win with a 10.58 over Bart Welte, who wheeled to a 10.65. Donnie Bowles went after the tree to the tune of 0.000 to lead qualifying in Exedy Racing Clutch Modular Muscle, but the final round belonged to Becki Cram, who was in her recently debuted Mustang, and Jason Henson. Cram collected her first NMRA event win after running right on her 10.51 dial, while Henson dipped under with a 12.14 on a 12.20 dial.

Robert Chuhran clocked a 0.001 reaction time to take the lead in qualifying in Detroit Locker Truck and Lightning, but later, reigning class champion Randy Conway cruised to the win with a 10.41 on a 10.36 dial, while Amanda Saad secured a 10.62 on a 10.55 dial in.

In ROUSH Performance Super Stang, Samantha Moore tackled the tree with a 0.001 to lead qualifying, but the final round featured Marvin Knack and Larry Firestone. While they had comparable reaction times, Knack knocked out the win with an 11.99 on an 11.97 dial to Firestone's 11.36 on an 11.23 dial. Gordon Harlow leaped off the line with a 0.000 to lead qualifying in ARP Open Comp, and he hung on to take the final-round vicotry with a better reaction time and a 10.29 on a 10.21 dial over Michael Lewandowski and his 9.01 on an 8.95. Krystie Wagoner wheeled to a 12.01 on a 12.00 index to lead qualifying in Race Star Wheels Ford Muscle. While she made it all the way to the final, Tom Osterkamp was ready for her on the tree and won with a lifting 10.15 on a 10.00 to Wagoner's breakout time of 11.98 on a 12.00 dial-in. In QA1 True Street, Mike Niehaus motored to the overall win with a 9.58 average, while Neal Alder netted the runner-up finish with a 9.82 average. Rick Lapinski was the 10-second winner, Casey Shotwell was the 11-second winner, Mike Baker was the 12-second winner, Mike Storts was the 13-second winner, Anthony Jager was the 14-second winner and Kevin Flanagan was the 15-second winner. 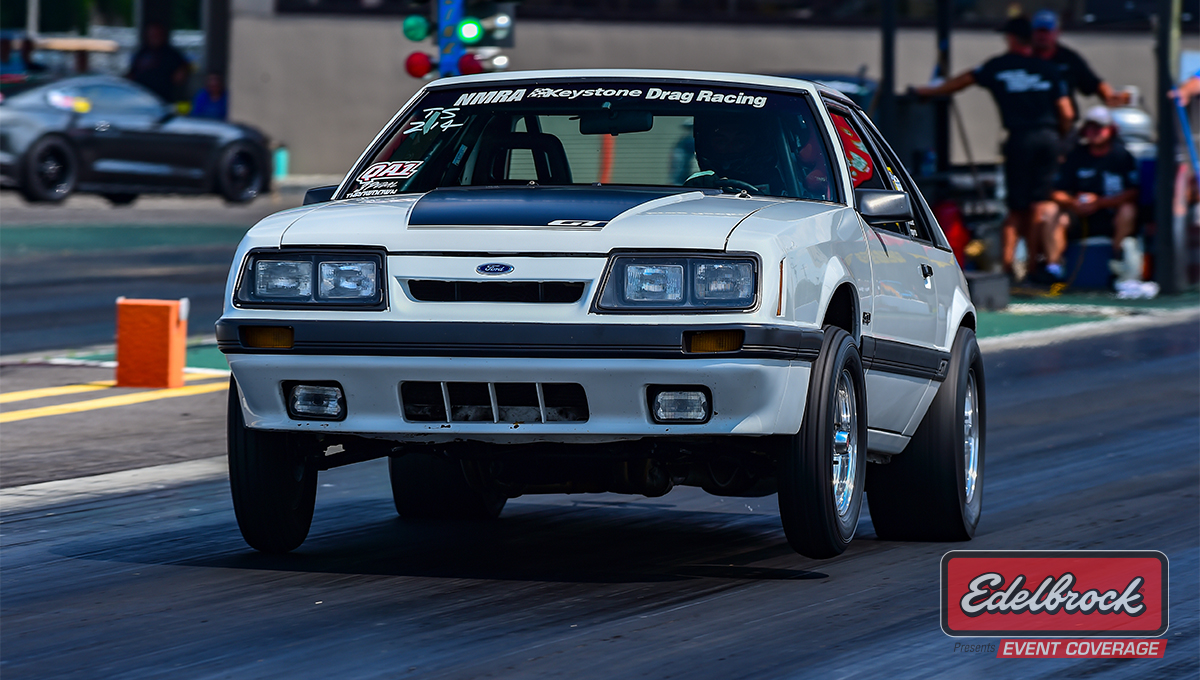