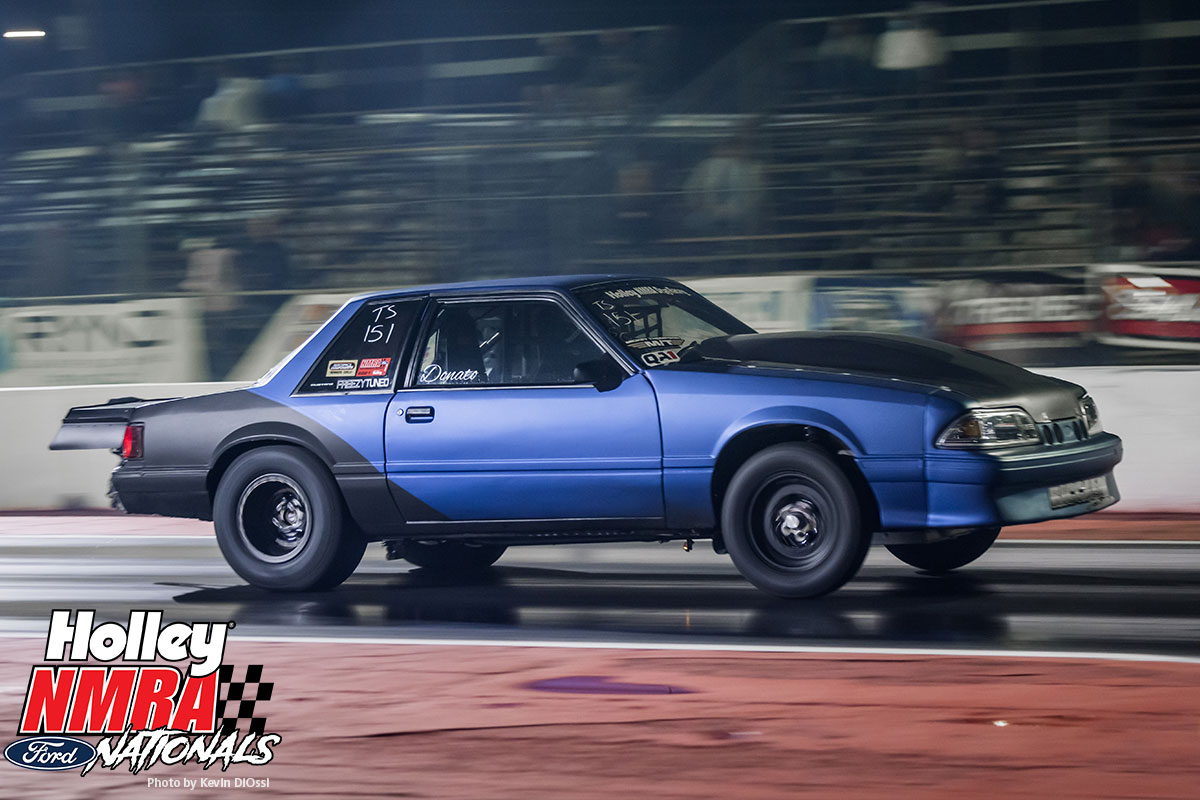 Continuing the legacy of the TREMEC Stick Shift Shootout specialty class, the quickest eight manually shifted Mustangs from QA1 True Street were awarded custom plaques and TREMEC jackets to recognize their accomplishments. Later, while competing on a Chicago style ladder, the overall heads-up eliminator was won by David Leshay of The Villages, Florida, piloting his classic 63 Galaxie to an 11.974 at 115.36mph win over Tyler Thornburg and his 88 Mustang. In the Mickey Thompson Street Car Challenge presented by Whipple Superchargers category, Donato Sierchio's blisteringly quick 7.456 at 183.89mph pass in qualifying gave him the advantage of going into eliminations from the number-one spot. His 86 Mustang proved unbeatable once again all throughout eliminations, as he clinched his third victory of the weekend on a 7.403 at 189.42mph final run while Randy Thomas, who had qualified second with his 10 Shelby, took home the runner-up honors with his respectable 8.379 at 167.95mph hit.

The exciting Watson Racing Cobra Jet Showdown presented by Ford Performance'showcases the best of Ford's factory performance with wild, wheels-up, action. Steve Trombley's 0.005-second reaction time behind the wheel of his 13 Cobra Jet earned him the top position in qualifying, and Trombley trumped the competition all through eliminations. For the last run of the weekend, Tony Jarvis who had qualified second pulled into the beams alongside him. Both men had impressive 8-second dial ins, but Trombley crossed the traps with more accuracy and earned the overall honors. The Bracket Open class on Sunday hosted an immense number of cars, requiring eliminations to be contested through seven rounds including the finals. There, Donavan Norton took on J.C. Cole for all the marbles in an unusual final. Cole red-lit with a -0.009-second reaction time, and when Norton tried to leave the line he faced mechanical trouble. Although Norton wasn't able to complete a pass, he still broke the beams to make his unconventional win official. Congratulations to all of the class winners, record setters, and those who ran new personal bests on a great start to the 2021 Holley NMRA Ford Nationals season. Racing resumes on April 9-11 at Atlanta Dragway in Commerce, Georgia, with the 13th Annual NMRA/NMCA All-Star Nationals. For more information and advance tickets, visit NMRAdigital.com.
BMR Suspension
,
bradenton
,
Bradenton Motorsports Park
,
florida
,
Holley
,
nmra
,
NMRA Ford Nationals
,
Spring Break Shootout