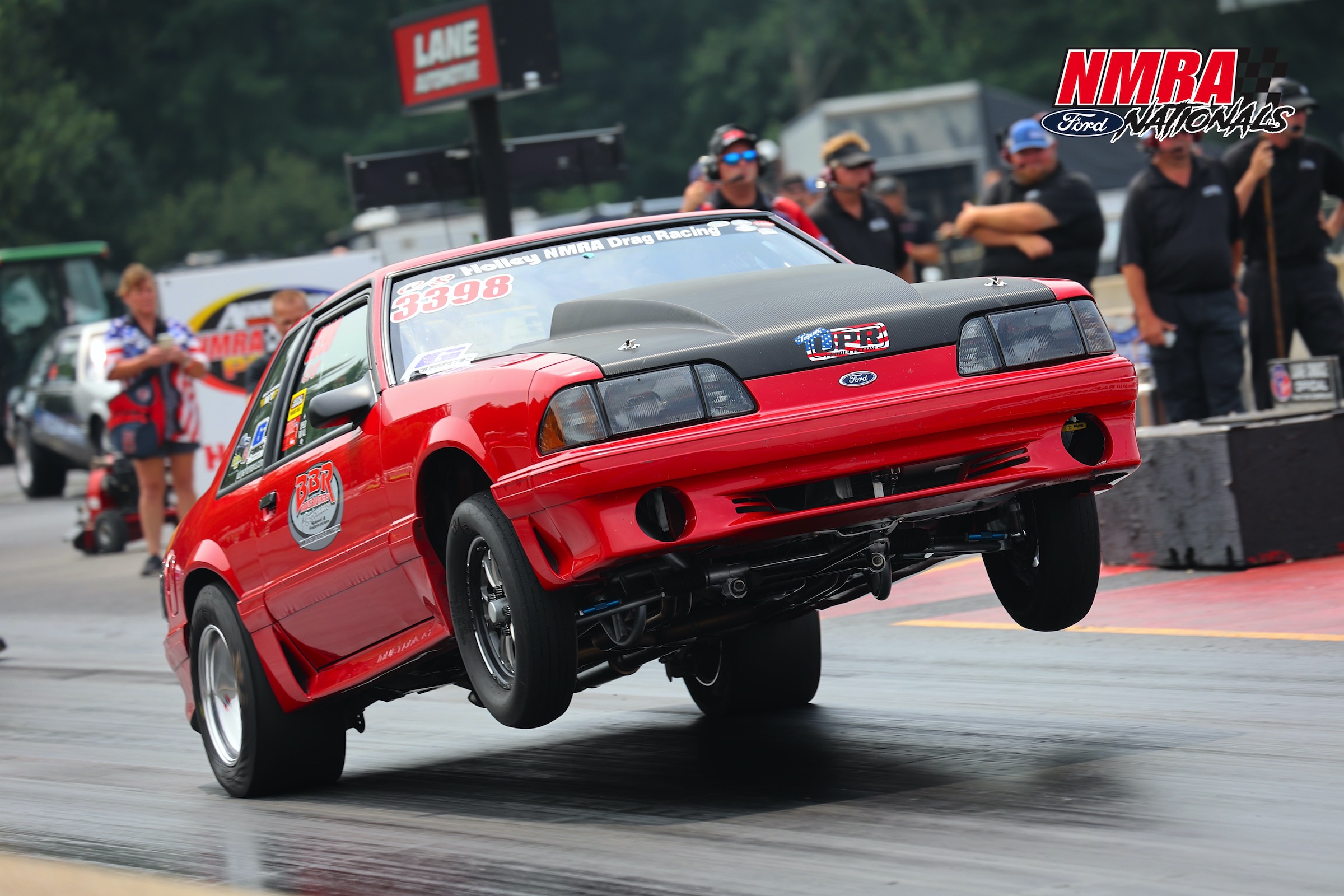 It was hot fun in the summertime as the Holley NMRA Ford Nationals travelled to the Wolverine State to join the NMCA Muscle Car Nationals for a weekend four days of drag racing at the Inaugural Arrington Performance NMRA/NMCA Power Festival Presented by Force Engineering. Attracting more than 500 total race cars to the Fastest Track in Michigan, US 131 Motorsports Park, the event saw brief bouts of wet weather, but prevailed to crown champions in all the heads-up and index categories, including the rain delayed final in VP Racing Madditives Street Outlaw won easily by Tony Hobson on a single in his white Fox Mustang held over from the rained-out NMRA/NMCA Super Bowl of Drag Racing held in Madison, Illinois, back in May.

In the combined VP Racing Madditives / Mickey Thompson Street Outlaw tilt this weekend, Mustang drivers bowed out early, resulting in an NMCA battle in the final round. Leading up to that, however, Tony Hobson's machine was the highest qualified NMRA representative thanks to a 4.30 at 164 rip. However, Hobson fell to Marty Stinnett and fellow NMRA racer Steve Halprin lost to Ron Rhodes, both in the second round. Stinnet would meet Rob Goss in the finals, and Goss streaked to the victory after Stinnett couldn't take the light.

Eric Bardekoff carried the momentum of his number-one qualifying effort a 4.57 at 155.28 to the final round in the combined Edelbrock Renegade / Xtreme Street category. Sporting a new Whipple supercharger under the hood, Bardekoff powered to the finals where he found a familiar opponent. Squaring off with defending champion Joel Greathouse, who lit the red bulb, handing the victory to Bardekoff who sailed to the win with a 4.58 at 155.93 mph.

After switching to a ProCharger P-1X supercharger in time for this weekend, Samantha Moore didn't miss a beat. She qualified at the to of the JDM Engineering Limited Street pack with an 8.38 at 165.68 mph an amazing feat for an off-the-shelf street blower. The co-owner of Vector Motorsports didn't stop there, as she took that performance to the final round, where she pulled away from Michael Lewandowski to take the win with an 8.42 at 165.81 mph to his 8.92 at 15162.

Driving Scott Milhimes Mustang, Charlie Booze Jr. qualified in the top spot in G-Force Racing Transmissions Coyote Stock thanks to a 9.88 at 135.46. Right behind him on the qualifying sheet was Shane Stymiest, who clicked off a 9.91 at 135.46. The two would meet again on Sunday evening as both ran consistent rounds en route to the final round. Booze got the leave to beat the quicker Stymiest to the stripe.

It was Two-Valve to the front in Richmond Gear Factory Stock as Mark Anderson ran the table, claiming the number-one qualifier position and taking the win in his high-revving Fox. Running progressively quicker with each round of eliminations, he face off against defending class champion John Leslie Jr. in the finals. When the tree dropped, Leslie yanked the wheels sky high, but upon returning to earth, his car scraped the wall as Anderson cruised to the Winner's Circle.

It came down to the number-two qualifier and the number-12 qualifier in Exedy Racing Clutch Modular Muscle, but the higher qualifier prevailed. In a role reversal, Adam Cox was slow on the tree in the final and Matt Harget took that edge all the way to the stripe for the win.

Stacked with 33 cars in the field, ARP Open Comp was competitive to say the least. Surviving five rounds to enter the final battle was a grind, but Jason Henson was still on his game. In a battle of New Edge Mustangs, he faced off with number-two qualifier, Charlie McCulloch, with an Edelbrock Victor Award on the line. Henson cut a light and nailed his dial-in to drive away with the win.

In Detroit Locker Truck & Lightning it was a clash of F-150 vs. Ranger as Mike Motycka squared off against Randy Conway in the final round. Though Conway qualified higher in the fourth spot, it was Motycka who got the jump at the tree and never looked back even though Conway ran right on top of his 10.27 index.

It was a battle of red S197s in the HP Tuners Super Stang final. Defending champ Kevin McKenna, who qualified in the fourth spot with a .036 reaction time, squared off against Rodney Ward. McKenna cut a better light and ran down the slower Ward, but got on the brakes too hard before the stripe as Ward won with a 12.83 on a 12.80 dial-in.

Bryan Parker cut the best light to earn the first slot in Race Pages Digital Ford Muscle qualifying. Chopping down the tree would serve him well in the last round where he faced

Fords dominated in the combined NMCA Torqstorm Superchargers / NMRA QA1 True Street, winning all the categories. Tim Flanders blasted to the top of the charts with an 8.99 average in his Avalanche Gray 1986 Mustang GT powered by a turbocharged Coyote engine. Hot on his heels in the runner-up position, Don Walsh Jr. piloted his Predator-powered 2020 Shelby GT500 to a 9.6-second average, which is impressive for a mild modified street car. The other competitors taking trips to the Winner's Circle included Matt Caldwell (9-second), Tyler Hassing (10-second), Cary Shotwell (11-second), Mike Baker (12-second), Rodney Ward (13-second), Ray Williams Sr. (14-second), and Dom Hoffman (15-second). Jager and Belcher took a cool $1,000 courtesy of Nitto Tire for running the company's NT555RII drag radials out back.

In addition to the on-track racing action, attendees enjoyed a diverse group of shiny machines in the UPR Products Car Show, and checked out the horsepower hardware on the robust Manufacturer's Midway.