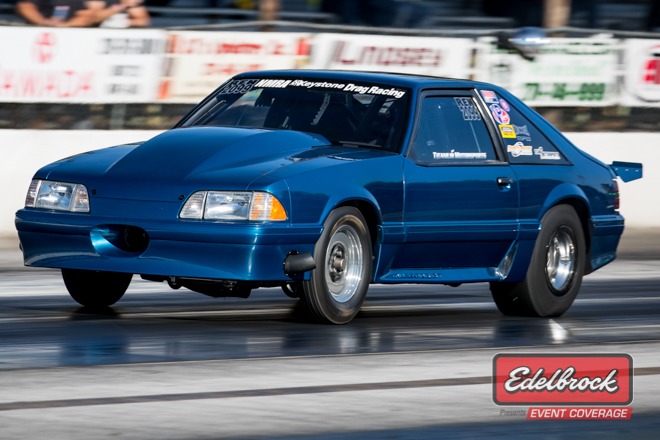 The sun has set on the 2018 NMRA drag racing season and on twenty years of incredibly awesome NMRA All-Ford World Finals competition at Kentucky's beautiful Beech Bend Raceway Park. Tons of sunshine and great racing allowed the year to wrap up with wins celebrated in the Aerospace Components Winner's Circle, records, championships, and a whole lot more at the 20th Annual Nitto Tire NMRA World Finals Presented By Holley EFI. Congratulations to all the NMRA racers on another epic season, and to all the event winners and newly-minted season champions. Andy Manson topped the qualifying order in VP Racing Fuels Street Outlaw with his 96 Mustang when the man from Manassas, Virginia, cruised the eighth-mile in 4.281 at 175.64 mph. Manson maintained his momentum through to the finals where he met with Alton Clements of Central, South Carolina. Both men left the line hard, but Clements in his newly-acquired 92 Mustang got the hole shot win on a 4.342 at 167.28 mph blast over Manson's 4.333 at 169.47 mph effort to capture the NMRA Victor trophy. It wasn't moot for Manson, though, as he was crowned the champion for 2018.

In Edelbrock Renegade, Tony Hobson of Moscow Mills, Missouri, took the top spot in qualifying on his 7.407 at 186.56 mph trip with his JPC Racing 14 Mustang. As the elimination rounds whittled down the contenders, it came down to Hobson and the number three qualifier, Bob Cook of Mokena, Illinois. Cook and his 90 Mustang had the reaction time advantage he kept at it to cross the finish nearly two seconds in front as Hobson struggled to maintain traction. Frank Varela, meanwhile, went out in the semi-finals but still won the overall season championship for the category earlier in the day. It was Texan Danial Pachar of Triangle Speed Shop leading the pack in ProCharger Coyote Modified when he ran 7.601 at 172.67 mph in his 04 Mustang. Pachar used his advantage to take out James Meredith in round one of eliminations, then went on to go 7.728 at 176.40 mph and defeated Haley James in the finals for the event win. James, however, secured the 2018 ProCharger Coyote Modified season championship along the way so it was a win-win situation for the two racers. In Steeda Autosports Limited Street, Sondra Leslie was the quickest qualifier as she ran the quarter mile in 8.572 at 158.73 mph with her 85 Mustang. Once the show got started, it was all about Michael Ciborowski of Trenton, Illinois, as he powered through the first three rounds to meet Matthew Williams in the finals. There, Ciborowski stopped the clocks in 8.733 at 155.10 mph with his 14 Mustang and continued on through to the Aerospace Components Winner's Circle to celebrate not only his win but also his championship. Running a 10.187 at 130.69 mph pass during qualifying, Indiana-based driver Darin Hendricks sat at the top of the competitive G-Force Racing Transmissions Coyote Stock class once the order was finalized. Despite going out midway through eliminations, Hendricks was deemed the season champion while Steve Kurimchak of Clarksburg, Maryland, persisted and stayed in the game to the finals. The number two qualifier saw Jacob Lamb in the other lane, and even though Lamb had the lead at the start, Kurimchak's 01 Bullitt powered past to take the stripe and the win with a 10.267 at 128.76 mph time slip.

Mike Bowen of Girard, Pennsylvania, inked his name next to the number one spot in Richmond Gear Factory Stock thanks to a quick 10.286 at 130.19 mph run from his 71 Maverick. Eliminations was a marathon of mayhem as all the drivers worked to chase the win, but it came down to Bart Welte and Dan Ryntz in the finals. Both men were piloting 89 Fox body Mustangs, but it was Welte from Findlay, Ohio who used his starting line advantage to find success despite his slower 10.384 at 127.51 mph run against Ryntz who ran 10.358 at 128.29 mph but still managed to capture the championship for himself. The large ARP Open Comp category saw Maynardville, Tennessee, resident Tim Hamilton cut a perfect 0.000-second reaction with his 37 Ford time during qualifying to wind up in the number one spot. The always insanely competitive eliminations competition ultimately pitted Steven Daniels of Valdosta, Georgia, against Brandon Rice in the finals. Aiming for a 10.75 number, Daniels had the lesser of two evils in a double break-out situation and illuminated the win lights in his lane. Championship honors, however, were awarded to Gordon Harlow for his outstanding performances throughout the season.

Hailing from Elwood, Illinois, Amanda Saad cut a quick 0.002-second light in qualifying to put her 83 Ranger into the number one position for Detroit Locker Truck & Lightning. Saad's success story didn't end there, and she took home five straight wins to finish out her weekend with a happy ending by making things official against Mike Motycka in the finals. Randy Conway, who went out in round three of eliminations, wound up earning enough points to be named the season champion for the year for the third year in a row.

With a near-perfect 0.002-second reaction time, Johnny Rusch from Chicora, Pennsylvania, lead the qualifying list in his 06 Mustang in Exedy Racing Clutches Modular Muscle. Next in eliminations, it was Becki Cram of Avon, Indiana, who enjoyed the spotlight as she expertly drove her 10 Mustang through five rounds of punishment to go home a winner over Andy Russell in the finals. Congratulations are also in order for the new champion of the class, Jason Henson. Roush Performance Super Stang's fourteen drivers all fought hard in qualifying, but Lebanon, Tennessee-based racer Darren Dryer's 0.01-second light put him at the top of the pack. Later, in the finals, Marvin Knack of Lexington, Illinois, made a big push and put his 11 Mustang into the Aerospace Components Winner's Circle when he defeated Andy Ransford by going closer to his 11.81 dial in while simultaneously finalizing his title as the champion for the season. In Race Star Wheels Ford Muscle competition, Bryan Parker of Centerburg, Ohio, was just 0.002-seconds off his index of 11.502 to score the coveted number one qualifier honors. Parker had to pack it up after round two, but went home knowing the championship was his and his alone. As eliminations continued, Kentucky-based racer Alan Mackin and Kevin McKenna were the final pair for the day. Great reaction times from both meant it was a close race, but the win was awarded to Mackin. Qualifying for Hellion Turbo Coyote Shootout saw Florida's Justin Jordan deemed to be the leader as his 7.026 at 198.61 mph hit put him and his 14 Mustang well ahead of the rest of the field. Jordan proved he deserved that number one beside his name as he went on to win three rounds of eliminations in a row to earn his final win TCS of the season.

In the specialty shootout Weld Racing Terminator vs GT500 battle, the quickest man on the property was Keith Rhea of Durry, Pennsylvania. Rhea ran his 04 Cobra out the back door to go 7.304 at 193.38 mph, but was defeated in round three while Randy Thomas and Lawrence Thomas were left to battle it out in the finals. Ultimately, it was Randy who ran quicker, going 8.392 at 163.87 mph in his 10 GT500 to send Lawrence's 04 Cobra back to the pits. The Race Pages Bracket classes were filled with fierce drivers and stiff competition, but it was Derrick Cornish of Lawrenceburg, Kentucky in his 87 Mustang who took the win outright in Bracket 1 when he defeated Tony Brock, while Jacob Young, also out of Lawrenceburg, did the same in Bracket 2 in his 91 Mustang over Jason Gregory. Finally, in Bracket 3, it was Mike Moistner of Dublin, Indiana who was the big winner thanks to a respectable run from his 85 Mustang to take out John Golliday along the way. Troy Eaton was named the overall winner of the QA1 True Street escapade when he averaged 8.370-seconds across his three quarter-mile runs and Nicholas Shortridge took the runner-up honors with his 9.240-second average. Mike Niehaus won the 9-second group on an average of 9.623, while Andy Vaughn capture the 10-second win on an average of 10.023. For the 11-second club, it was Kenneth Hilliard averaging 11.046-seconds to take the lead and Nickelus White winning the 12-second bunch with his 12.042-second average. Other winners included Ron Hayden (13-second), Logan Johnson (14-second), and Denny Alvey (15-second). The quickest eight stick-shifted cars from QA1 True Street were invited back to run the special Tremec Stick Shift Shootout. With qualifying set based on the averages from True Street, Nicholas Shortridge had the advantage with his 9.240-second average seconds. Going out in the semi-finals, Shortridge left the door wide open for Jeff McCool of Galloway, Ohio, and his 81 Mustang to cruise on through to glory as Bob Myers settled for runner-up honors. As the victor, McCool also won a McLeod clutch while Tremec also gave $100 to the first 25 entries to True Street. Additionally, in ZP Performance Steering Outlaw True Street, the baddest no-time street legal competition was going down and Tim Oswalt of Lake View, Alabama, proved to be the quickest of the bunch when he turned the win light on in his lane against David Capps in the final round of the exciting showdown. NMRA 2018 World Champions include Andy Manson in VP Racing Fuels Street Outlaw, Frank Varela in Edelbrock Renegade, Haley James in ProCharger Coyote Modified, Michael Ciborowski in Steeda Limited Street, Darin Hendricks in G-Force Racing Transmissions Coyote Stock, Dan Ryntz in Richmond Gear Factory Stock, Gordon Harlow in ARP Open Comp, Randy Conway in Detroit Locker Truck & Lightning, Jenson Henson in Exedy Racing Clutch Modular Muscle, Marvin Knack in Roush Performance Super Stang, and Bryan Parker in Race Star Wheels Ford Muscle. Once again, congratulations to all of our provisional champions and event winners who closed out the year in style in the Aerospace Components Winner's Circle. We appreciate the support of all the racers and fans who came out to an event this season or followed the action online courtesy of the SpeedVideo.com live stream. We'll be back at it in just a few short months when we begin the 2019 NMRA Keystone Automotive drag racing season in March at Florida's Bradenton Motorsports Park!