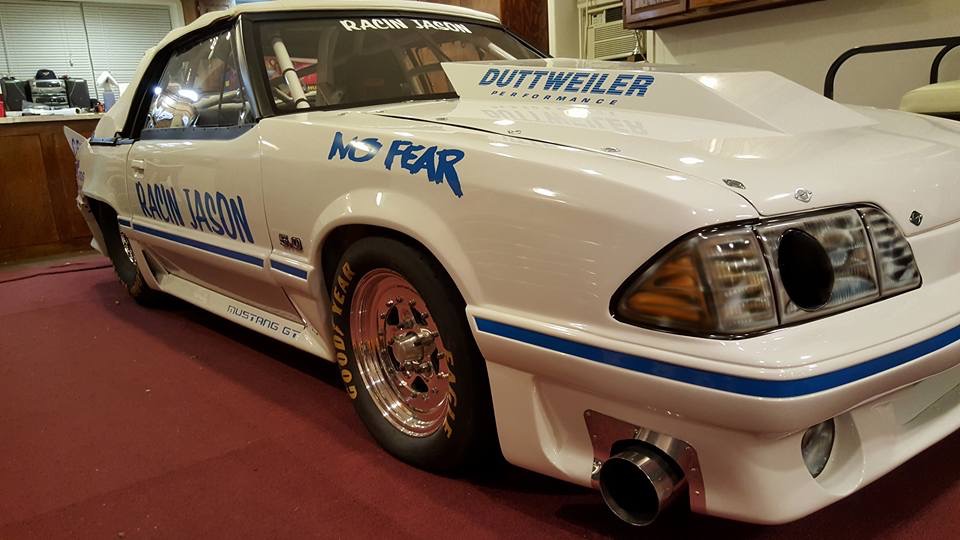 Update Joe Caldwell announced plans to have the Racin' Jason Mustang on display during the reboot of the Ford Motorsport Nationals, an event that the team frequently attended before the Pro 5.0 movement went nationwide. The car broke all sorts of records and won several match races at the Ford Motorsport Nationals, making its return that much more special. The Wyotech Ford Motorsport Nationals, presented by Juggernaut Power, is the third stop on the NMRA tour and kicks off April 28 through May 1, 2016 at Maple Grove Raceway. Back in the 90s, the name Jason Betwarda or Racin Jason was synonymous with 5.0 Mustang racing, at first on the East Coast, and then across the country, as he began to be featured in more and more magazines. He was deserving, as he was the owner of the white 87 Mustang GT convertible that Mike Ragusa famously drove to a 7.79 at 182 mph at Old Bridge Township Raceway Park in Englishtown, New Jersey in 95. It was the first seven-second pass for a 5.0 Mustang, and its power came from a small-block Ford and twin turbos. It broke a track record, said Joe Caldwell, who now lives in Harrison, New York, but used to live in Yonkers, New York, not far from Betwarda, who lived in Scarsdale, New York. The crowds went crazy for the car wherever they raced it. They eventually got it to go 7.56 at 187 mph, and also around that time, Jason had a small-block single turbo combination built for a Mustang coupe he also had, and it was while testing that car in 99 that he got loose at 180 mph, barrel-rolled it and died at the age of 29. According to Caldwell, Betwarda's parents asked Ragusa to help sell the record-setting white 87 Mustang GT that he had been piloting, and after being bought and sold a few times, it ended up in a storage facility in Chicago, Illinois. Nobody knew what had happened to the car, and one day in the fall of 2013, I found it for sale on Racing Junk, said Caldwell. I asked Mike Ragusa if he wanted it because I wanted to give him the first chance to have it, but we decided that I would buy it. Once I determined that the VIN was right and it really was Jason's car, I couldn't believe I was going to own it. I had rode in it when Jason bought it new and I had seen its transformation. Caldwell delivered the car to C&F Race Cars in New York, where it was given a 7.50-certified chrome moly cage, nine-inch rearend, four-link, C&F Race Cars rear suspension, Team Z Motorsports tubular front suspension, tubs, wheelie bars and a wishbone. Vincent Auto Body in New York performed the body work, outfitted the car with a new VFN hood and decklid and laid a fresh coat of Oxford White on it, and then Greg Rigos of Kaos Designs re-lettered the car with the same style lettering he had used when it belonged to Betwarda. Once Caldwell discovered that Betwarda was having a 408 cubic-inch small-block Ford built by Duttweiler Performance prior to his death, and that Duttweiler Performance still had the engine, he bought it. With a Dart aluminum block as a base, it features Yates heads, Wilson intake and an Accufab 104mm throttle body, and it's fronted by two 88mm Turbonetics turbos. Troy Baum of Race Wires routed all of the wiring, and the combination is backed by a Powerglide transmission and ProTorque converter. The car rolls on its original Centerline wheels wrapped around 16X33 slicks, but the rear wheels have been beadlocked by Extreme Fab in Connecticut. Frank Soldridge of PSI Speed Solutions was brought on to lay the tune using Big Stuff 3, and in early dyno sessions, the combination produced a whopping 1600 horsepower at the rear tires with 30 pounds of boost. The rear tires were spinning all over and we had to strap the back of the car down, said Caldwell, a retired New York highway patrol officer. We think it will have 1850 horsepower at the tires at the track. Now, after putting his heart and soul into the project, Caldwell has asked Ragusa to return to the rebuilt car's driver's seat, and while they'll debut it at the 16th Annual WyoTech NMRA Ford Motorsport Nationals, April 28-May 1 at Maple Grove Raceway in Reading, Pennsylvania, it will be for exhibition, not competition, as the team hasn't had track-time and tuner Soldridge has a prior commitment that weekend. According to Caldwell, the car is capable of producing six-second passes, but he intends to rein it in around the 7.50 area and focus on exhibition rather than competition. It's a tribute to Jason, and it's pretty emotional, said Caldwell. He was a good guy, and he made 5.0 what it is. To get an inside look of the evolution from abandoned car in storage to its new modern rebuild, check out the Racin Jason Mustang FaceBook page.