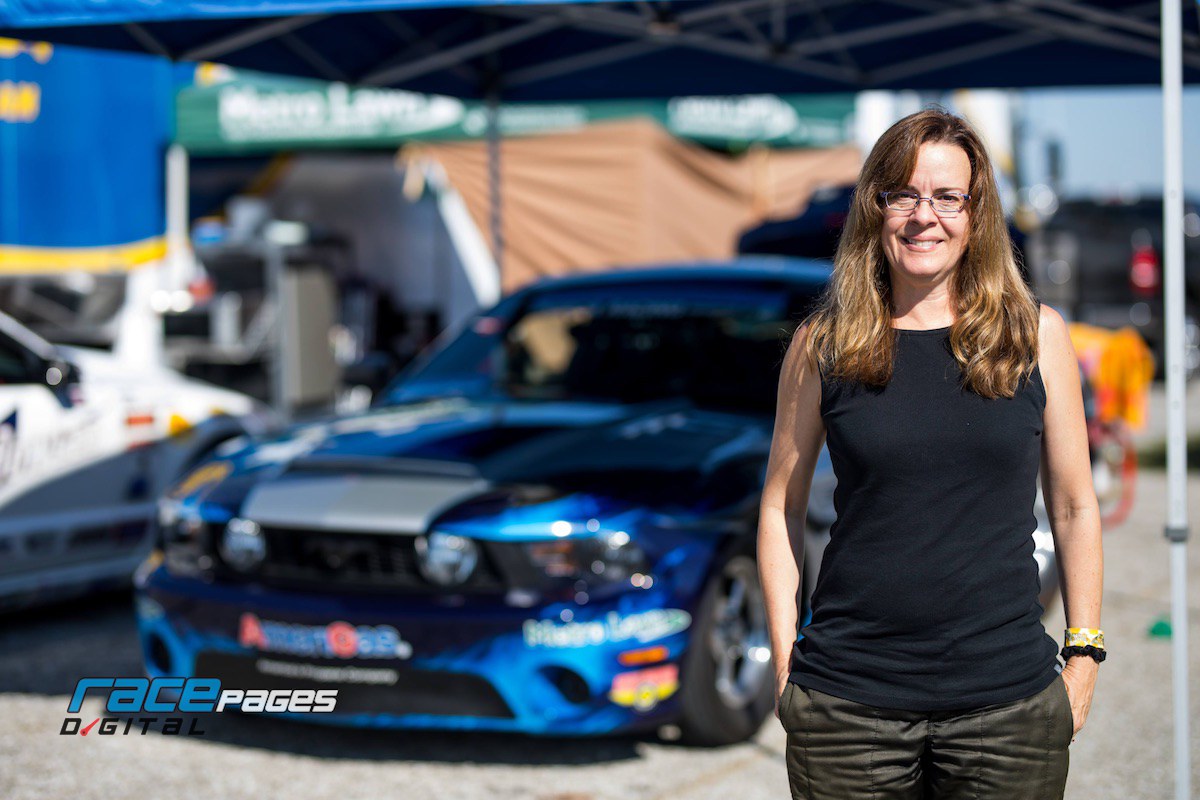 Among Susan Roush-McClenaghan's most cherished childhood memories is going to the track with her family to watch her father, Jack Roush, race. She found everything about the experiences to be especially engaging and incredibly inspiring, and she proved that when she went on to restore a 1967 Cougar, navigate for drivers taking part in the Great Race and pilot her 2003, 2001 and 2010 Roush Mustangs in NMRA Aerospace Components Open Comp, NMRA Exedy Racing Clutch Modular Muscle and NMCA MagnaFuel Open Comp. It's in the latter car, the 2010 Roush Mustang motivated by a supercharged 5.0 Coyote engine and AmerigGas propane, that she has commanded the most attention, as she drove it to the 2011 NMCA MagnaFuel Open Comp championship and 2013, 2014 and 2017 NMRA Exedy Racing Clutch Modular Muscle championships. And while she's deserving of the spotlight, she prefers that it shine on her family, her crew and her teammate, Donnie Bowles, who's also a multi-time champion in his 2005 Roush Mustang, and who had a childhood comparable to Roush-McClenaghan's, as he grew up watching his father, Don Bowles, race. Susan and I spent a fair amount of time together as kids when our fathers were racing, so it's really special that all these years later, she and I came together again to race as part of a team, said Bowles. She's very methodical, and her routines are very practiced and honed, whereas I tend to fly by the seat of my pants, but our approaches complement each other well. I really appreciate what we have been able to accomplish with our team. Read on for more about Roush-McClenaghan, who lives in Michigan with her husband, Dale, and daughter, Josie, who are also racers, and who manages the Roush Automotive Collection, which features more than a hundred vehicles, displays and multimedia exhibits, and is located in Livonia, Michigan. 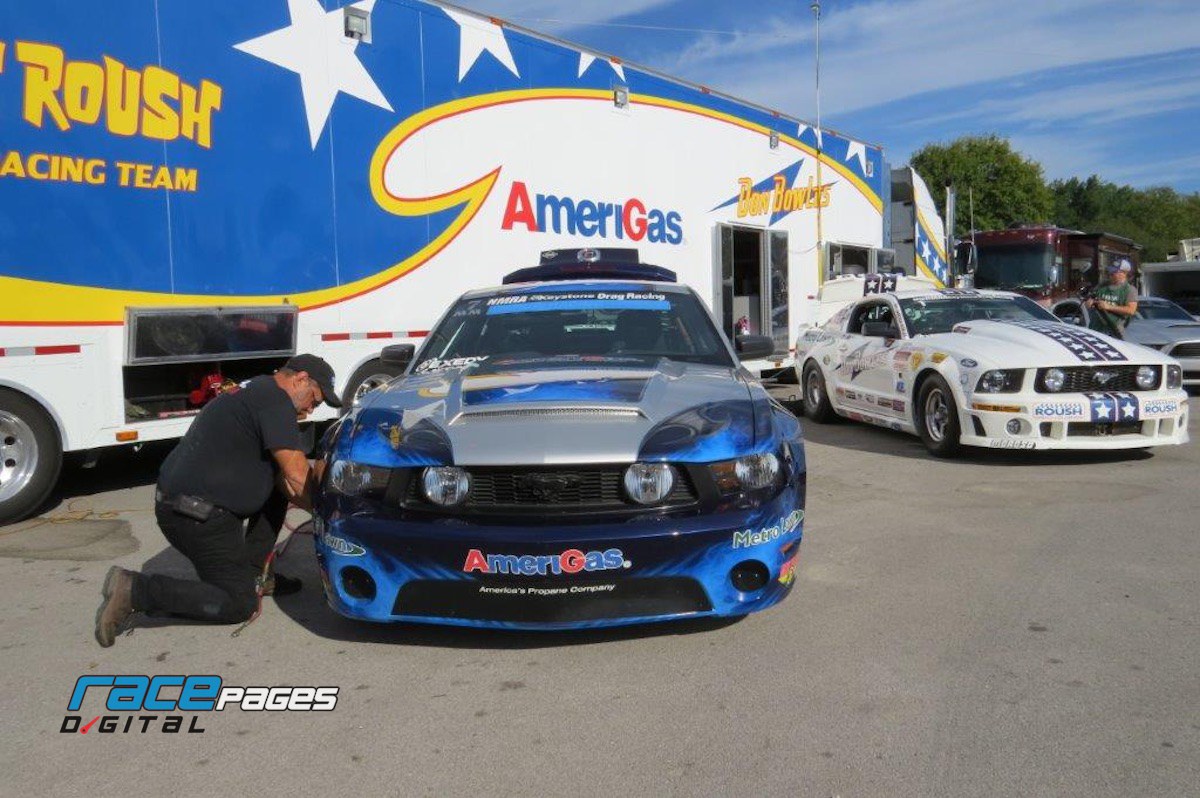 YOU HAD A VERY MEMORABLE CHILDHOOD IN THE MOTOR CITY. Yes, I did. My parents, Jack and Pauline Roush, met at Berea College in Kentucky, where I was born, but following my parents graduation, we moved to Detroit in the mid-1960s. My dad, who worked for Ford, and even for Chrysler for a short while before going on to start his own company, spent so much time drag racing with Wayne Gapp that I spent much of my early years growing up at the track. After the split with Gapp, dad continued to build engines and provide services for people in the drag race community. In addition to being a pretty cool time for us, it was an exciting and defining time for our country because there was so much going on culturally, with drag racing, and even street racing, playing a significant role. The competitive spirit in the Detroit area is huge. That's why we now have nationally recognized things like the Woodward Dream Cruise and other cruises around here throughout the year. YOU HAVE A PASSION FOR CLASSIC COUGARS, AND REBUILT A 1967 COUGAR IN THE MID-1990s. I remember the Pintos, Mavericks and Mustangs that dad and Wayne Gapp built and raced, but Cougars have always appealed to me and I had always wanted to restore one, so imagine how pleased I was when I found one in California. It was a high-mileage plain Jane, but it had never been wrecked, so I bought it and had it brought to Michigan. My husband, Dale, and the fellows in the shop at Roush helped me a great deal when I needed help, but I also enjoyed spending a lot of time working on the car on my own. In addition to working on the car itself, I swapped the small-block Ford that was in it with a 410 cubic-inch engine from a Mercury Marauder that had been sitting long-neglected in someone's yard. It was seized-up from rain water collecting in the intake over who knows how many years I took it apart and cleaned it up. It was a nasty mess. I vividly remember having to pound out a cylinder with a 2X4 and a hammer. I don't believe I had ever been covered in so much grease and grime before. Through the rebuild, I learned how to de-bur the block, gap rings and inspect all of the parts and then measure once, measure twice, clean, fit and finally, put everything back together. When done, I topped the engine with a set of 428 Cobra Jet heads and a Sidewinder intake manifold. On the dyno, the engine produced 424 horsepower and 424 foot-pounds of torque. I was familiar with engines and their parts and how everything worked from being around my dad's business, but that was my first real education in engine builds, so it was a very important and meaningful project to me. DO YOU SEE YOURSELF FOLLOWING THAT REBUILD WITH ANOTHER REBUILD As a matter of fact, I have ended up with a couple of 1968 Cougar parts cars that we had gathered over the years, and I took them to Steve Matukas, a well-recognized and accomplished chassis builder who's crafting an awesome 1968 Cougar that will have a classic retro feel with highly competitive modern technology under it. Kurt Neighbor has been guiding me through the building of a pair of 427 Cammer engines. He points and I wrench. It's still evolving, and it's going to take some time, so I haven't been talking a great deal about it. I'm leaving my options open as far as where we might race it. 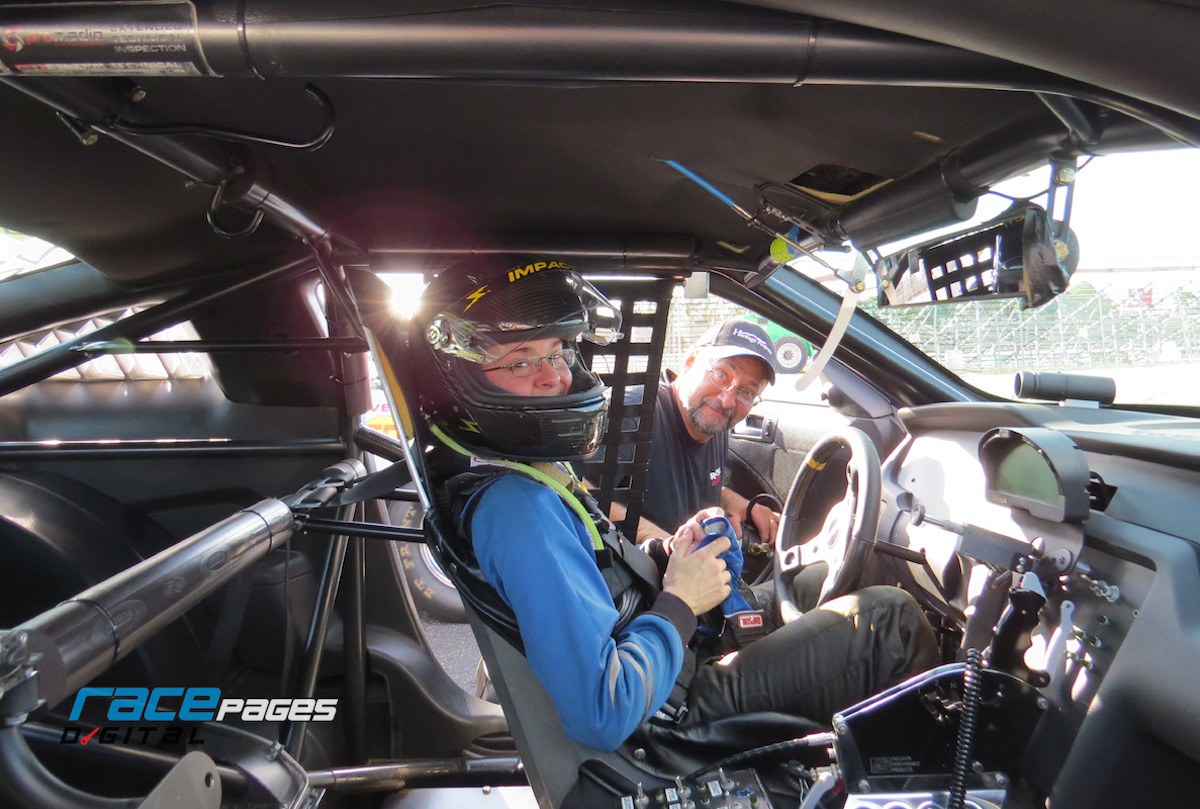 YOU PROVED TO BE A TALENTED NAVIGATOR WHILE TAKING PART IN THE GREAT RACE IN THE LATE 1990s. A friend of my dad's who wanted to take part in the race asked dad for help, and dad wasn't going to hand over the resources or the opportunity without some kind of involvement. He asked me to act as a mediator between his friend and the marketing group for our NASCAR activities in North Carolina. Through our efforts we ended up with sponsorship from the History Channel, which was very cool. They wanted me to coach cable operators who were guests of the History Channel on how to rally, so I had to learn all about navigating in a very, very short amount of time. On occasion, I navigated for them as I taught them how to do it. Eventually my husband, Dale, and I started competing as a team on our own. The race covered about 4,400 miles in 15 days, and had a different route each year in which we participated for ten years. By far, one of the most memorable moments that came out of that experience was in 2000, when my dad invited (NASCAR driver and commentator) Benny Parsons to come for a day, and he stayed for four days because he loved it so much. Benny had been a dear friend of my dad's for many years and I cherished the opportunity to get to know him and his passion for motorsports. YOU HEADED IN A DIFFERENT DIRECTION IN 2005, WHEN ROUSH PERFORMANCE PRODUCTS RENTED MILAN DRAGWAY IN MICHIGAN FOR A DAY. Dad called me from track and saidHey, I'm here with the Roush Performance Products group, and we have Milan Dragway for the day, so why don't you come check it out I had never been down a drag-strip, but I went and made 10 or 12 passes in my dad's 2003 Roush Performance Products Mustang street car, which had a manual transmission. By the end of the day, I thought,I can do this.I enjoy learning, and it helps me when talking about all of the parts and cars and putting together marketing materials for my job at the Roush Automotive Collection. DO YOU THINK YOUR DAD SUSPECTED THAT HIS INVITATION WOULD LEAD YOU TO NMRA AEROSPACE COMPONENTS OPEN COMP, NMRA EXEDY RACING CLUTCH MODULAR MUSCLE AND NMCA MAGNAFUEL OPEN COMP I'm the oldest of three children, and dad has always tried to find ways to get us excited about the things he loves and the things he has passion for, so it wouldn't surprise me if he knew that I would start racing with the NMRA and NMCA after that. 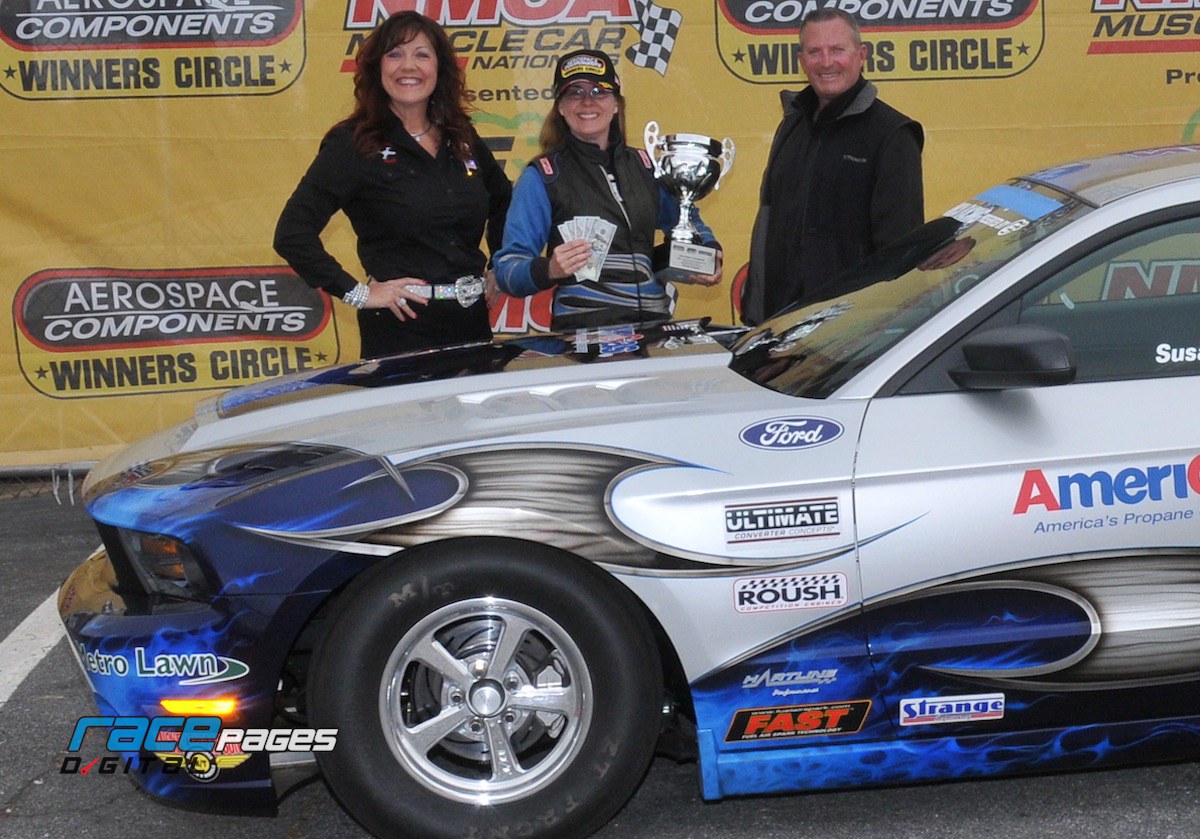 DONNIE BOWLES SAID THAT WHILE YOU AND HE APPROACH RACING DIFFERENTLY, YOUR STYLES MESH. We definitely approach racing differently, but that actually helps when we're working something out. We bring our own energy to what we do, and we have a lot of skilled and talented people who work with us, and who contribute greatly to our success. Donnie has a wonderful technical mind and is detail oriented, especially with technology, parts and vehicle systems in a way that I am sometimes not so much. I enjoy sifting through data, working with numbers and looking for trends. We bring our strengths together. I've been told I look so calm, but I do have my moments, and I have done quite a lot of pacing around the car waiting to be called to the lanes. Laps and laps actually. But, I've tried to make an effort to be adaptable. An example of that is I'll give the other driver any lane they want, because I don't want to be in a place in my head that I need a lane so badly that it's going to screw me up. We can be our own worst enemy, so I decided a long time ago not to worry so much about a lot of things and that is one less thing. WHAT DO YOU ENJOY MOST ABOUT RACING One of the things that I enjoy most about racing is that it has given me an opportunity to be a mentor, which is very humbling. I was talking to a dad and his 9-year-old daughter at a race, and the dad said he had been trying to get his daughter to go to an NHRA race, and she asked if I was going to be there. When he told her I wouldn't be there, she told him she wanted to go to a race where I would be. Then, he told me that his daughter would probably be a race car driver because of me. I never imagined when I was in my 20's or 30's that I would go on to be so involved in drag racing. I can't tell you how crazy it feels to have the kind of success that we have had, especially considering neither Donnie nor I raced when we were younger. Another thing that's crazy is how close the results have been over time between Donnie and myself by way of wins and championships. I don't know if that will always be the case, but I certainly can't complain if I never win another race or championship. WHAT ARE YOUR PLANS FOR THE FUTURE The 2001 Mustang that I graduated to in 2007 had a 4.6 Two-valve with a supercharger in it. But, it has had so much time on it, and it's one thoroughly worn out powerplant. So, we're going to replace it with a supercharged Coyote crate engine. We're also going to look at the car from a functional and safety standpoint, so it's developed into a major overhaul. We're hoping to get it back on the track this year in Open Comp and Modular Muscle. An old familiar friend with a new personality. Very, very exciting. Donnie and I are fortunate to be able to do all of this with the support of so many people, from those in the shop to those in the office and those who come to the races with us, including Cal and Jake Hartline, Steve Fackenger and his wife, Cathy, our fabricator, Andy Robinson, my sister-in law Lynn McClenaghan, good friend Bobby Barrick and many others. (Interview by Mary Lendzion for the June 2018 issue of Fastest Street Car, and photos by Kevin DiOssi, FSC staff and courtesy of Cathy Fackenger) 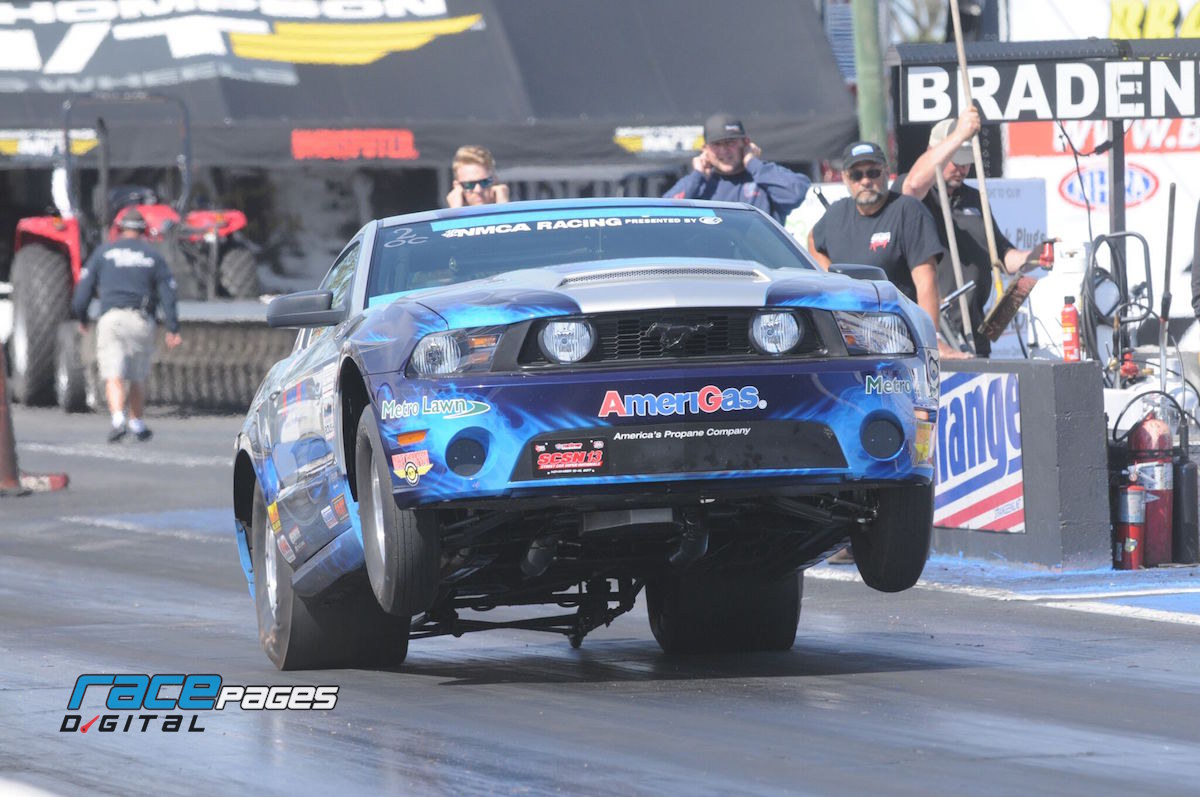