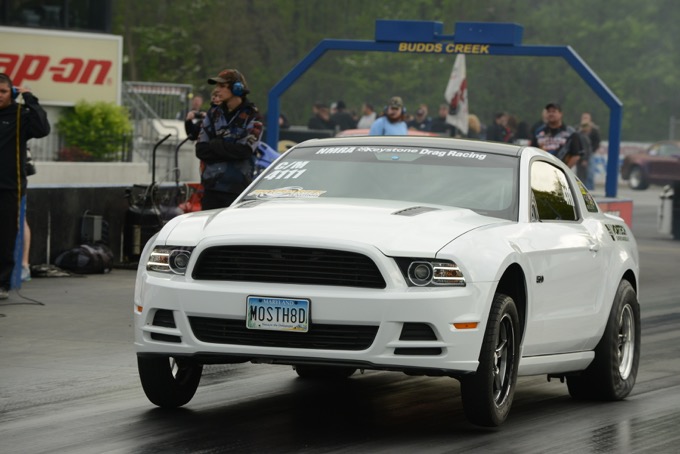 While Ronnie Reynolds was laying down 8.80s in his 2014 Mustang in NMRA ProCharger Coyote Modified last year, he's turned his focus to 7.50s in NMRA Turbo Coyote Shootout sponsored by Fluid Turbo Concepts, JPC Racing and Henchmen Racing. To help him achieve that, he swapped his Vortech supercharger for a Precision turbo, and while he's mum on the size of that turbo, he'll share that his tried-and-true 302 cubic-inch Coyote engine built by Rich Groh Racing Engines and JPC Racing is up to the task. Its stock block features aluminum block supports which he fabricated and RGR sleeves, and it boasts Manley I-beam rods, Ross pistons and stock cams. Its stock heads have been given a new set of Trick Flow valvesprings to accommodate the change in power-adders, and a Boss intake sits on top. Reynolds, who had been running an air-to-air intercooler, outfitted his car with an air-to-water intercooler. He used a JPC Racing hot side kit, and fabricated the cold side for the turbo, which will be forward-facing. I just want to go faster, said Reynolds, of Baltimore, Maryland, a tech for JPC Racing. I had been thinking about moving from a supercharger to a turbo, and made the decision at the end of last year. Reynolds has replaced his Turbo 400 with a Powerglide built by Bowie Transmission Service, and Kevin McDonald will make everything play together nicely with an AEM Infinity engine control unit. I've had a lot of input from the folks here at JPC about this combination, and I shouldn't have any issues with it, said Reynolds. We've had it on the dyno, but I want to keep the results on the down-low. Reynolds, who's supported in his race efforts by his colleagues at JPC Racing, Scott Wayne and his wife, Stephanie Reynolds, plans to take part in the NMRA Turbo Coyote Shootout sponsored by Fluid Turbo Concepts, JPC Racing and Henchmen Racing at the 22nd Annual Nitto Tire NMRA Spring Break Shootout, March 3-6 at Bradenton Motorsports Park in Florida; 16th Annual NMRA Ford Motorsport Nationals, April 28-May 1, Maple Grove Raceway in Pennsylvania and the 18th Annual Nitto Tire NMRA All-Ford World Finals, Sept. 29-Oct. 2 at Beech Bend Raceway Park in Kentucky.