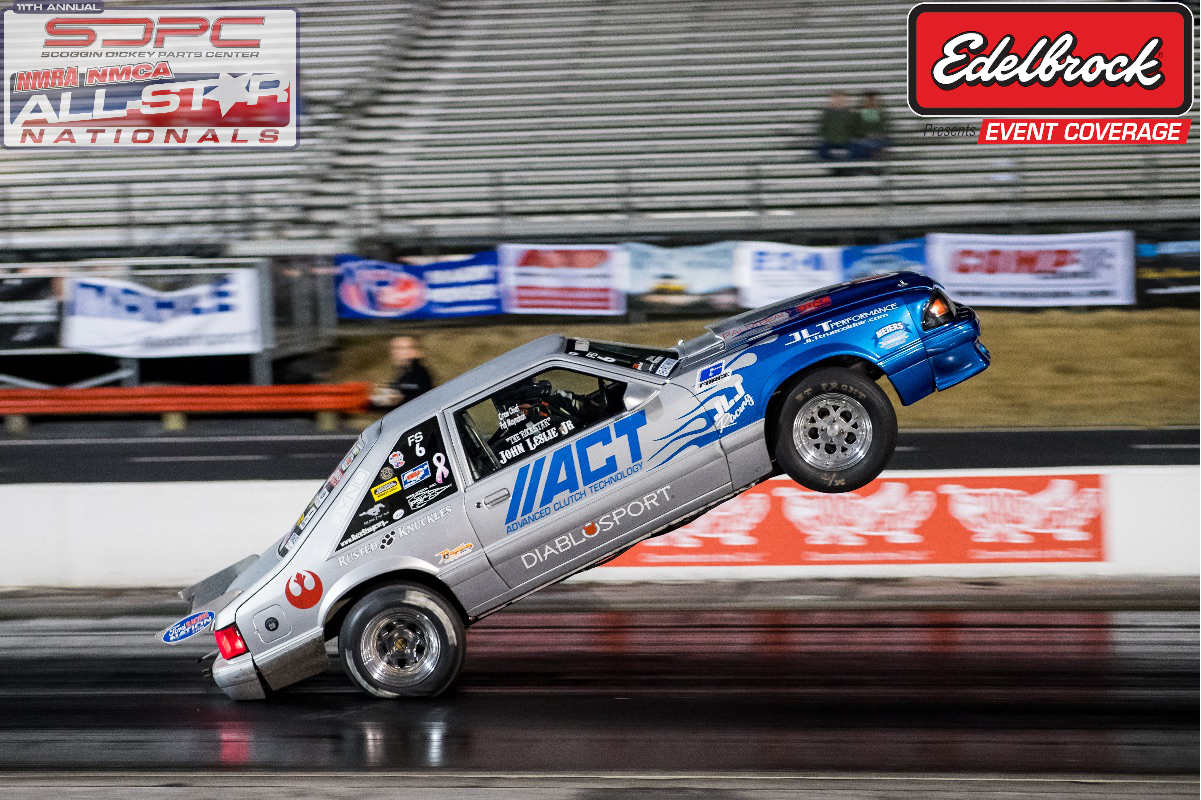 Today things get serious at the 11th Annual Scoggin-Dickey Parts Center NMRA/NMCA All-Star Nationals Presented by MAHLE Motorsport. After a wet start on Friday, the NMRA/NMCA team dried and prepped the track and we ran a full round of qualifying yesterday, which included some impressive performances. Today the action continues with two rounds of qualifying, as well as eliminations in the All-Star Shootouts (which pit competitors from the NMRA and NMCA series against one another), the Dodge // Mopar HEMI Shootout, and the EATON TVS Supercharger Throwdown. Stay tuned right here for updates as the action unfolds and watch the live feed over at SpeedVideo.com as racers plot a course toward a trip to the Aerospace Components Winner's Circle. 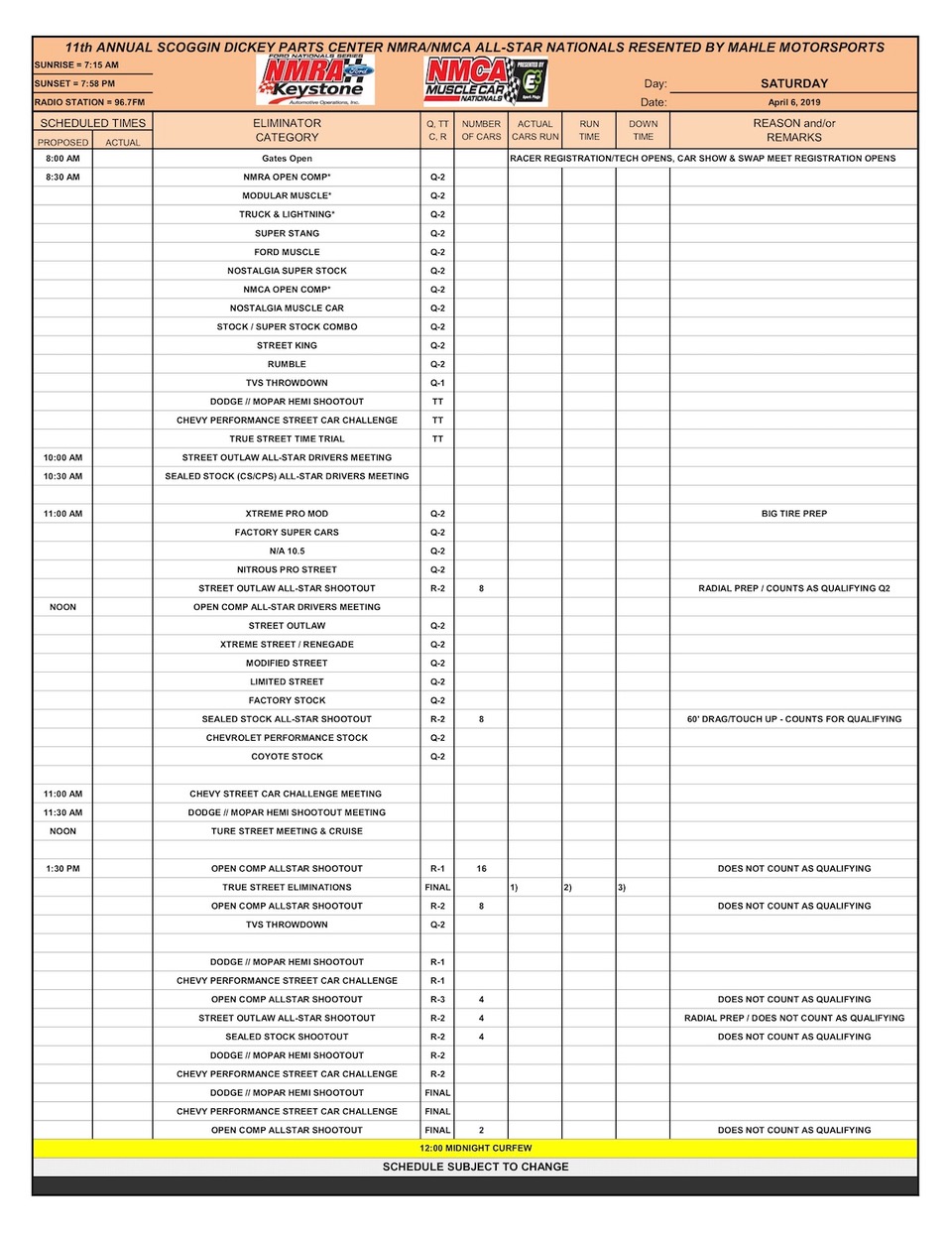 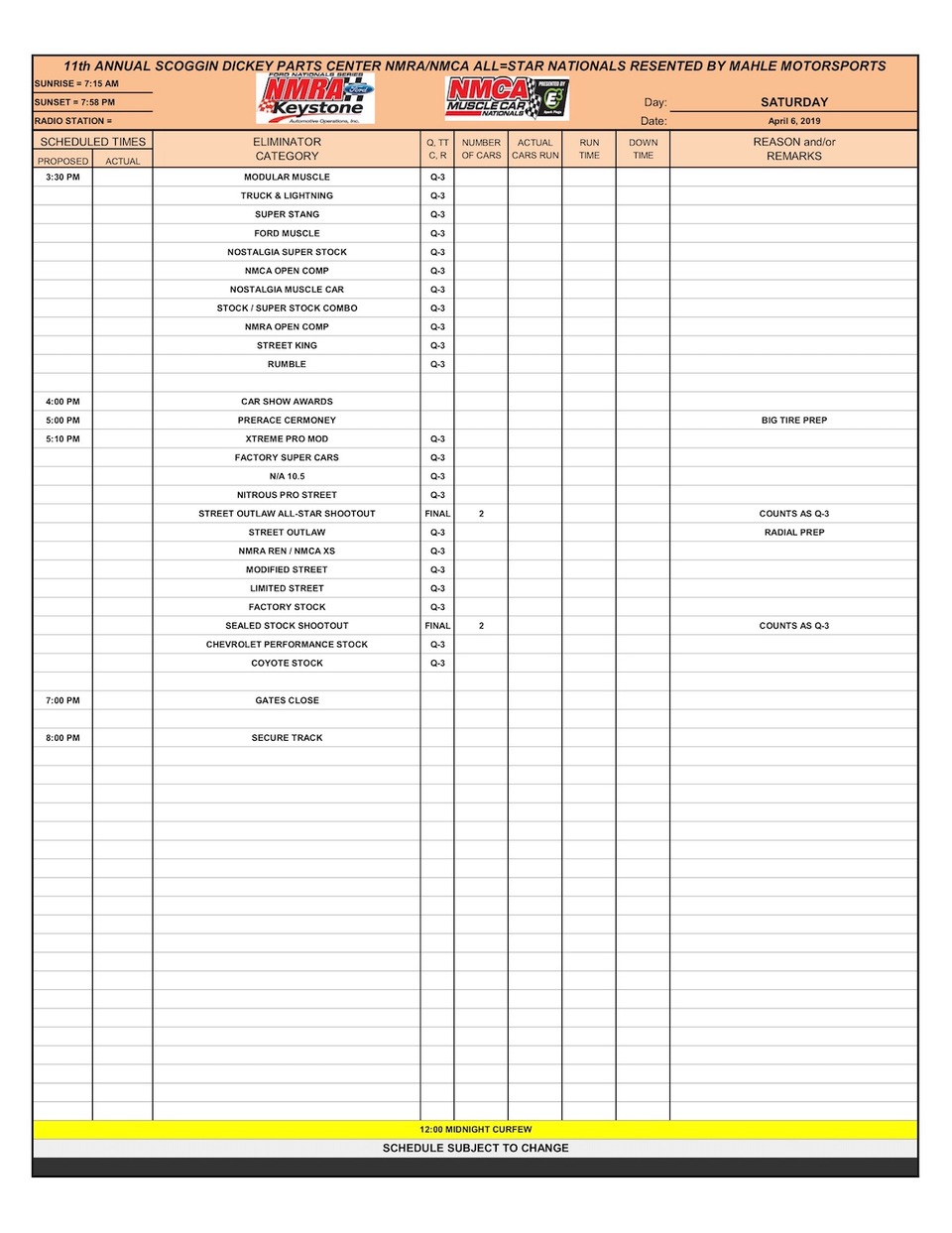 Here's a look at how the action will unfold today at the 11th Annual Scoggin-Dickey Parts Center NMRA/NMCA All-Star Nationals as racers establish their positions going into tomorrow's big day of eliminations. 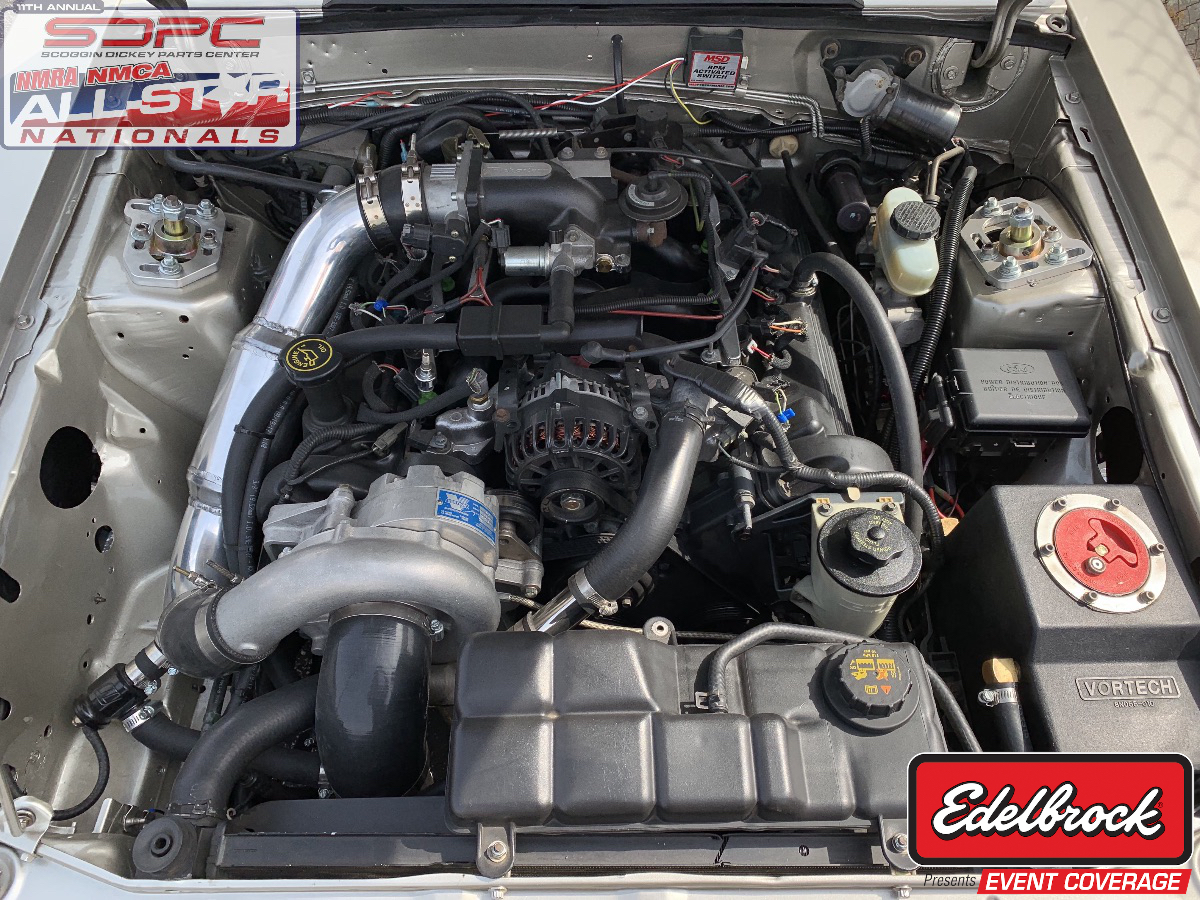 It is rare to see a 1979 Mustang Indy Pace Car edition out in the wild, and even rarer to see one racing. Dylan Neuenschwander is competing with this Pace Car in NMRA Race Star Wheels Ford Muscle with this freshened-up car, which was originally a V8 car. It did not, however, come with the blown 01 4.6-liter modular engine or Strange rearend that Neuenschwander installed. He has run a best of 12.10 in the car so far, but no matter how quick it runs, we just enjoy seeing it in action. 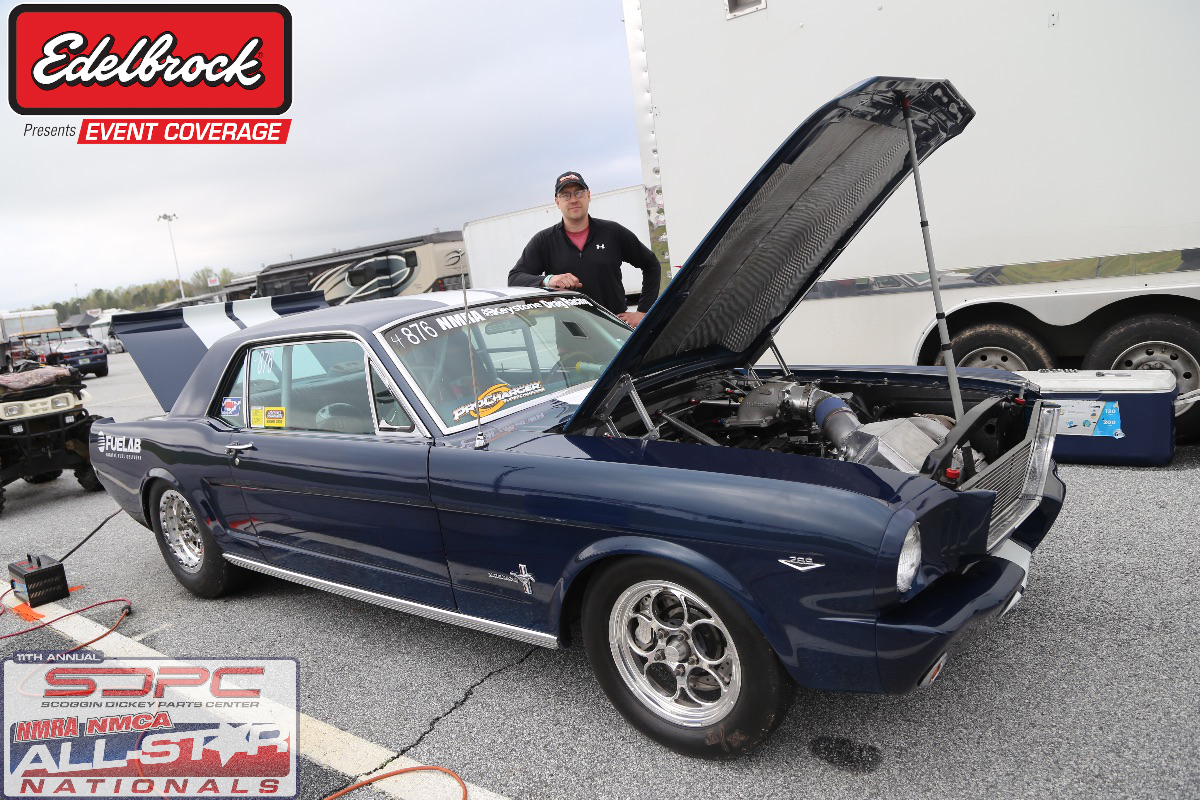 A True Street regular, Kurt Welfel is out at his first race with his classic Stang's new combo, which features a 340-cube small-block boosted by a set of Precision Turbo 76/85 turbos from Hellion Power Systems, and cooled by an Alton Clements intercooler. He is just feeling the new combo out this weekend, but he plans to bring it out to all the remaining races where he will compete in ProCharger Modified Street. 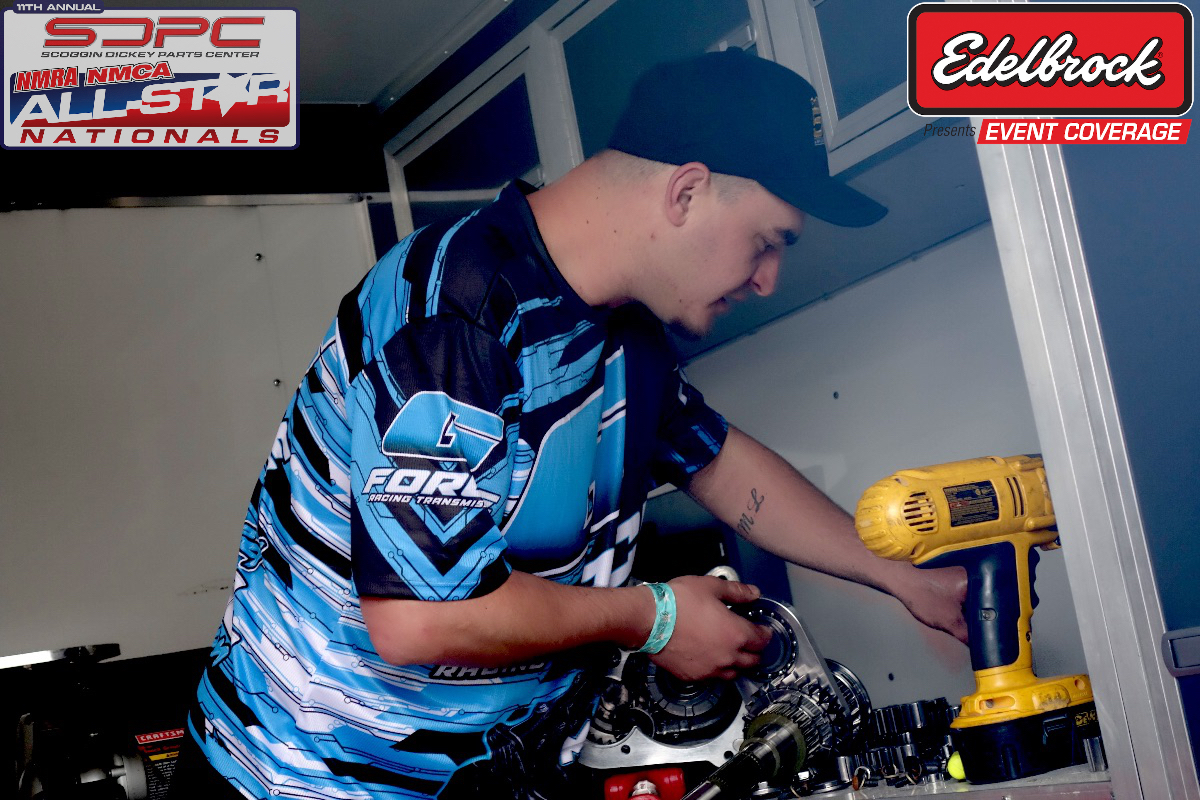 NMRA legend Charlie Booze Jr. celebrated his 50th birthday yesterday with the best way he knows how racing. Booze is back with his Freight Train Fox Mustang for the first time in NMRA competition since 2012, and has already been quick to make a host of changes since the season opener in Florida last month. Booze did a complete gearing swap both in the rear gear and in the trans, added a new cam, and made some lifter changes to his naturally aspirated Windsor engine. New stickers from Strange add the perfect finishing touch, and he's also bolted on a set of radials for the first time since the old days. Booze currently sits second in NMRA ProCharger Modified Street with an 8.017-second hit.

John Leslie Jr. hit the wall and did some damage during Friday night's NMRA Richmond Gear Factory Stock qualifying session. Shortly after leaving the line, his Mustang went up in a massive wheel stand and likely hit the push bar bracket which unloaded the chassis and caused Leslie to careen into the wall. He's OK, fortunately, but his Fox body didn't fare as well as it acquired some body damage as well as significant suspension damage.

Photo courtesy Hellion Racing B-Team A late-night swap to change her ProTorque U9 converter to use a different stator is part of NMRA Edelbrock Renegade badass Haley James's plan to improve upon her qualifying run last night of 4.785. 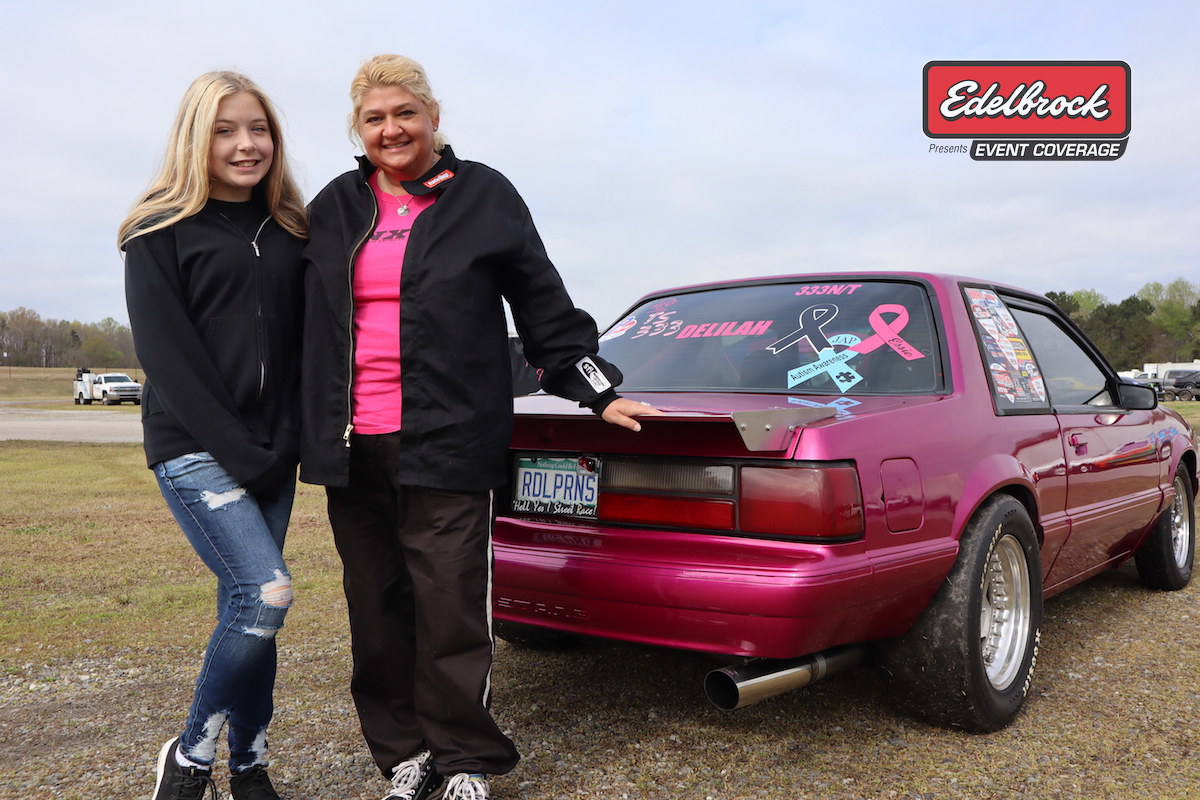 With a grandfather and a father who raced, Robin Whiteford Quinton is a third generation racer who simply can't stop smiling when she's at a race track. Whiteford Quinton, pictured here with her niece, Gracie Harris, earned a win in NMRA QAI True Street at this event a few years ago, and is hoping to repeat the feat in the category this weekend in her popular pink Mustang powered by a small-block Ford enhanced by a Nitrous Express system and painted pink by C&L Customs in honor of her mother's fight against breast cancer. She's looking for an 11.50, and she'll have help dialing in her combination from her husband and crew chief, Eric Quinton. Cheering for her from afar are her students at Emerald High School in South Carolina, where she teaches Behavioral Improvement. "My students help me with the car back home," said Whiteford Quinton. "They want to see how I do at the races, and when I do well, their faces light up. 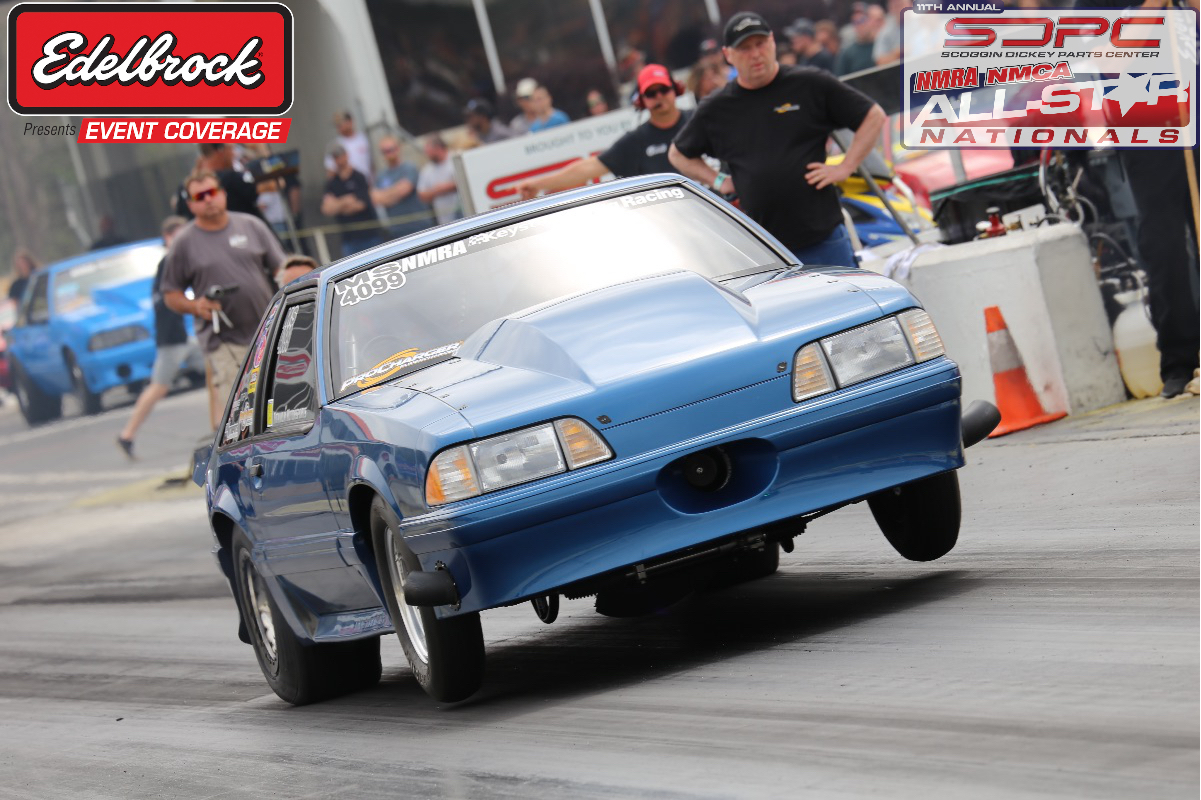 Since the season opener, Bob Cook changed up torque converters and his combo responded nicely. He nabbed the top qualifying spot in ProCharger Modified Street so far thanks to a 7-second rip, and he looks like the man to beat so far. 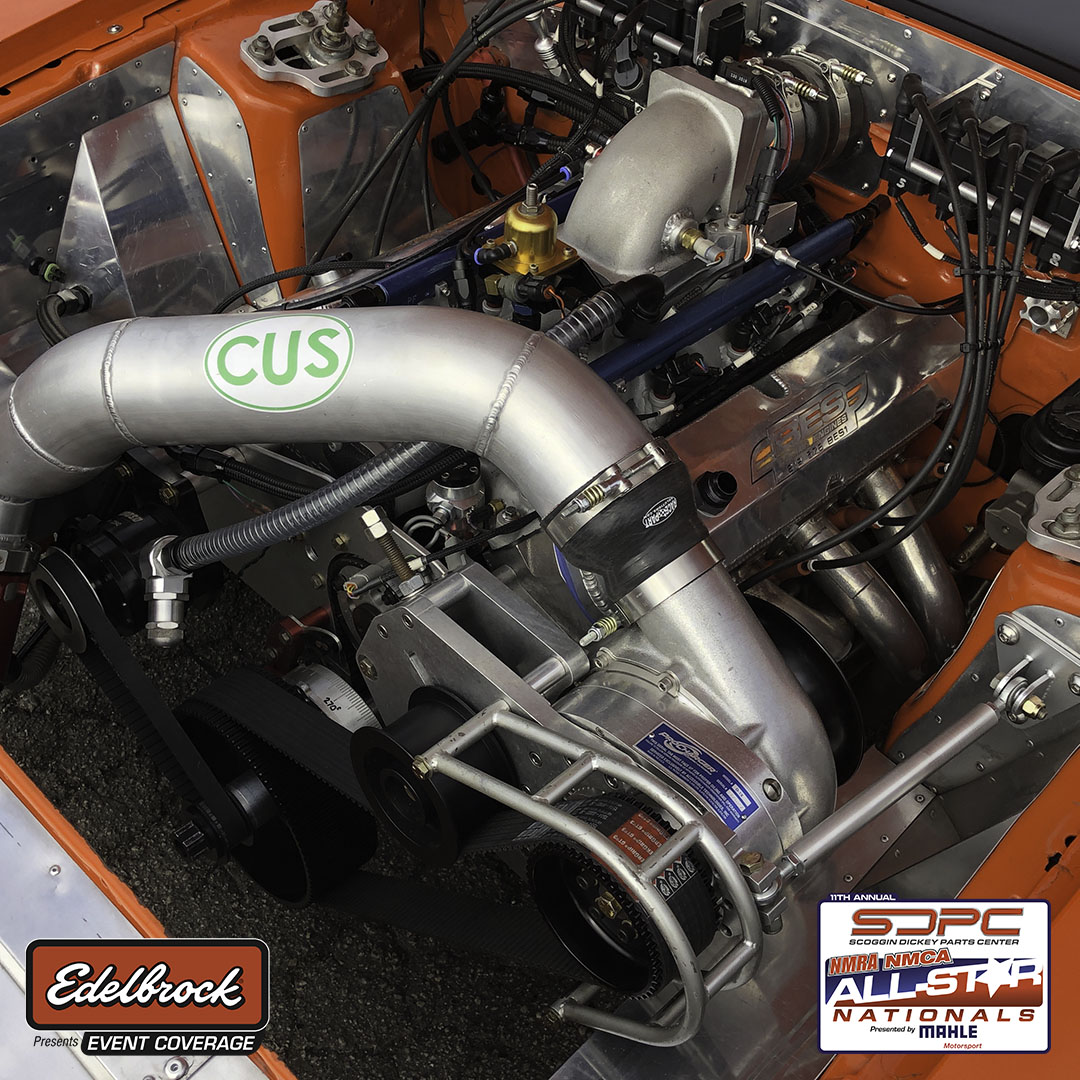 Having previously raced in the NMCA's Edelbrock Xtreme Street class, Martin Connelley is no stranger to the way the events are run. He's been running in the Ultra Street class with a nitrous combination in Ed McCarty's Mustang, but he and friend Eric Mitchell decided to throw caution to the wind, drop in a ProCharger D1-X blower, change the gear, the transmission, and the torque converter, and come join the fray in the NMRA's ProCharger Modified Street class this weekend. The bright orange '86 Mustang packs a 365ci small-block Ford with Trick Flow high-port cylinder heads. 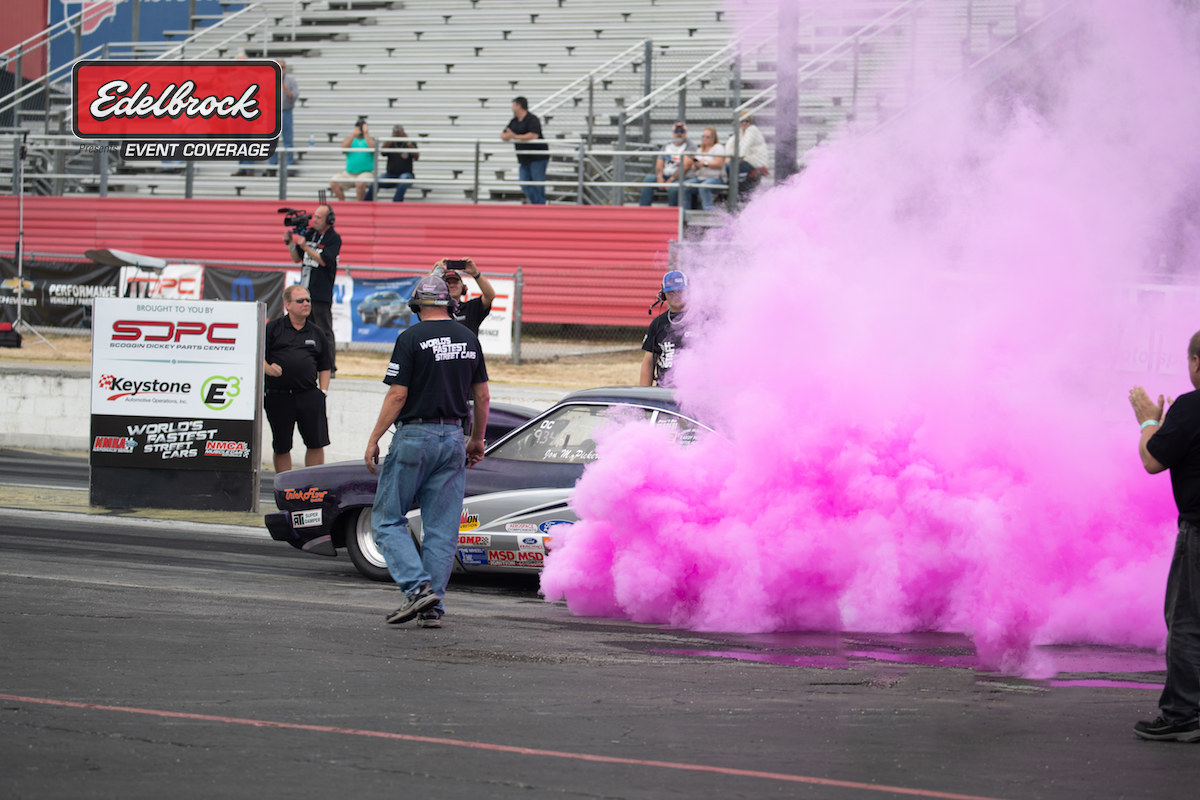 NMRA ARP Open Comp/NMCA MagnaFuel Open Comp driver Jon M. Pickering turned the air pink during a burnout today for a highly-anticipated gender reveal for the baby his son, Joshua Pickering, and his significant other, Laurie Lynn, are expecting in August. There were happy cheers, and a fair amount of happy tears, when the plume of smoke turned pink. Congratulations to the family, and thank you for adding even more excitement to this weekend's event. 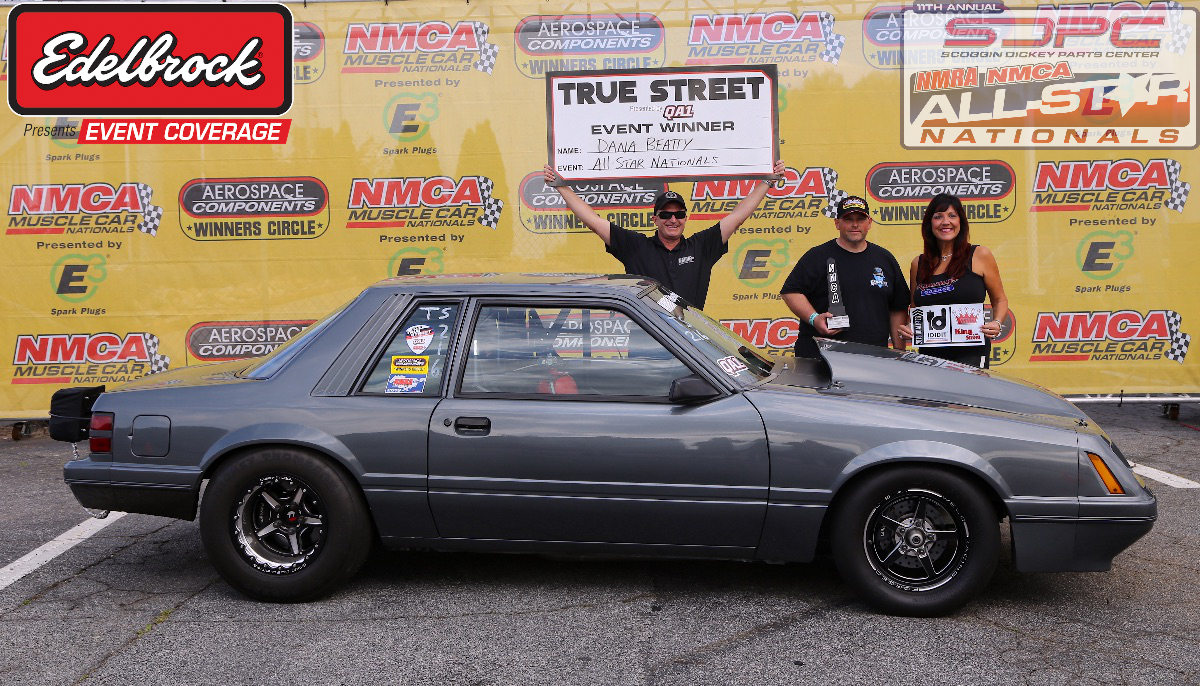 Though he showed up late and was basically just testing his combo, Dana Beaty drove his 1986 Mustang to the overall victory in QA1/Gear Vendors True Street. His Fox is powered by a Kaase-headed, 557-cube big-block Ford topped with a big nitrous kit. It is based on a stock 460 block and has forged internals, but Beaty says it is a beater motor. That modest powerplant strung together an 8-second average to earn a trip to the Aerospace Components Winner's Circle. His victory also earned one of the coveted spots in the IDIDIT King of the Street competition at the NMRA World Finals in Bowling Green, Kentucky. That race will pit the season's quickest True Street machines against one another at the end of the season.