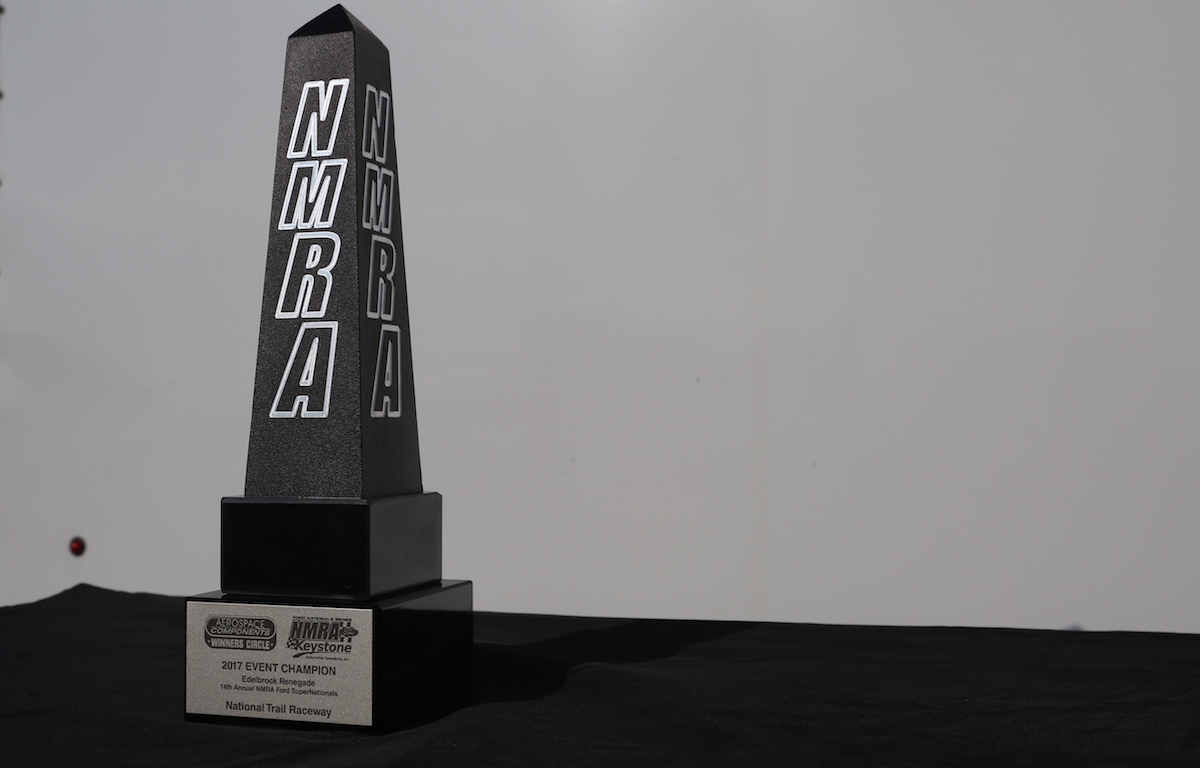 We begin day two of the 14th annual NMRA Super Nationals, presented by WyoTech, on a somber note. Yesterday evening we learned of the passing of Vic Edelbrock, an icon in the automotive aftermarket. Vic was a dear friend to NMRA and NMCA and we express our deepest condolences to the Edelbrock family in this time of mourning. Vic and his Edelbrock Corporation have been supporters of our series and magazines since day one, carrying enthusiasm and excitement for our brand of drag racing. He was first to sign up as the title sponsor of the PRO Series, now known as the NMCA, in 2001 for its inaugural season under the ProMedia banner. His support and dedication led our founder, Steve Wolcott, to dedicate our event and champion awards after him, honoring a legend and innovator in our industry. In 2016, we debuted the "Victor" trophy, which is not only named after him but also manufactured by Edelbrock. We like to joke, to the victor go the spoils and this trophy is a wonderful way to celebrate a race win and a championship. We are saddened for his passing and we will always cherish the friendship, support, and dedication he has shown not just us, but the entire enthusiast aftermarket.

Friday was a long day as race officials ran the eliminations rounds from the WyoTech NMRA Ford Motorsport Nationals, which was delayed from last month due to rain. It made for a long day, but it was action-packed and ten racers received a Victor trophy in the Aerospace Components Winner's Circle. Here are the <<RESULTS>>

"Titanium Bob" Cook is back in Edelbrock Renegade competition and he came with several upgrades. Dale George built a set of custom forward-sweep headers with fender exit exhaust tips at his ET Shack hobby garage. Cook then removed his tried-and-true C4 and replaced it with a Pro-formance TH400 transmission and a new Ultimate bolt-together torque converter. The car ran well with a 4.94 elapsed time in the eighth-mile, which Cook estimates to be in the 7.60s once they run it out the back door.

There is only one way to win and an infinite number of ways to lose--for Tommy Annunziata it seems as if the National Trail Raceway has something personal against him. Adding to the list of obscure problems is a loss in traction due to small rocks and dirt getting dumped under his tires. How did that happen It seems on late model Mustangs there is a pocket between the body and the bolt on rocker panel where rocks and dirt can accumulate. Unbeknownst to Annunziata and his crew chief, Jim LaRocca, the car would dump the rocks at the launch and caused them to spin the tires. A fellow racer suggested they check that area and sure enough, that was the issue.

Bruce Hemminger (left) assembles a new Tremec TKO 600 for Matt Amrine as a back-up for today or tomorrow. Amrine unleashed several 10.60 runs, yesterday, as he grabbed the Richmond Gear Factory Stock win for the rain-delayed WyoTech NMRA Ford Motorsport Nationals. Third gear had been making some noise in the earlier rounds but by the finals, it shifted smoothly into third. However, Amrine wanted this new one in case he needed it for eliminations.

Six-time Edelbrock Renegade champion Brian Mitchell is finding his groove in his return to national competition. Just four races in and Mitchell has already started mixing it up with the top contenders. He has traded the top qualifying position with Alton Clements and Frank Varela. Mitchell snagged the top spot through two rounds of qualifying with a 7.50 at 182 mph but Varela is knocking on his backdoor with a 7.50 at 180 mph and Clements sits third with a 7.51 at 181 mph. There is one more round of qualifying this evening with eliminations going down on Sunday.

We are putting this here, just because.

His wheelie might not be as high as the one Shane Stymiest pulled off (above), but Jacob Lamb doesn't care as he went to the top of the G-Force Racing Transmissions Coyote Stock ladder after two rounds of qualifying with a 10.24 at 128 mph. There is a final qualifying round later today for all NMRA championship categories. The 21-car field has tightened up considerably, which has provided some of the best competition in heads-up drag racing. The Coyote Stock class requires a Ford Performance crate engine, which is a Coyote 5.0 and the factory "seals" it to prevent tampering. NMRA tech officials also upload a special engine calibration, further ensuring the racers are on an even playing field. The game comes down to optimum clutch tuning capabilities. FINAL QUALIFYING <<HERE>> QA1 True Street Final Results Winner: Jeramiah McGreevy Average 9.053