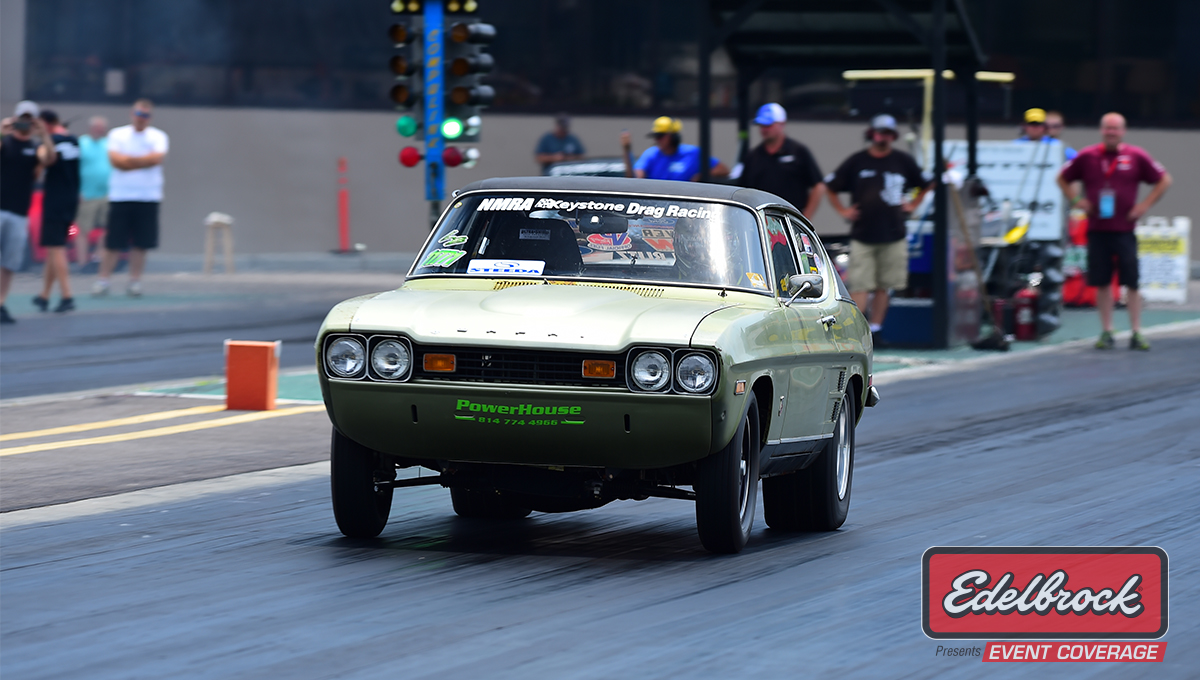 The Capri Swarm is unofficially the largest gathering of the first generation (1970 to 1977) Mercury Capri in all of drag racing. NMRA hosts the Capri Swarm with a dedicated test-and-tune category and special show categories. The leader of the pack is James Meredith as he is unofficially the quickest and fastest first gen Capri. He ran 9.80s yesterday as he tunes up his naturally aspirated Coyote 5.0 engine for competition in Steeda Limited Street. 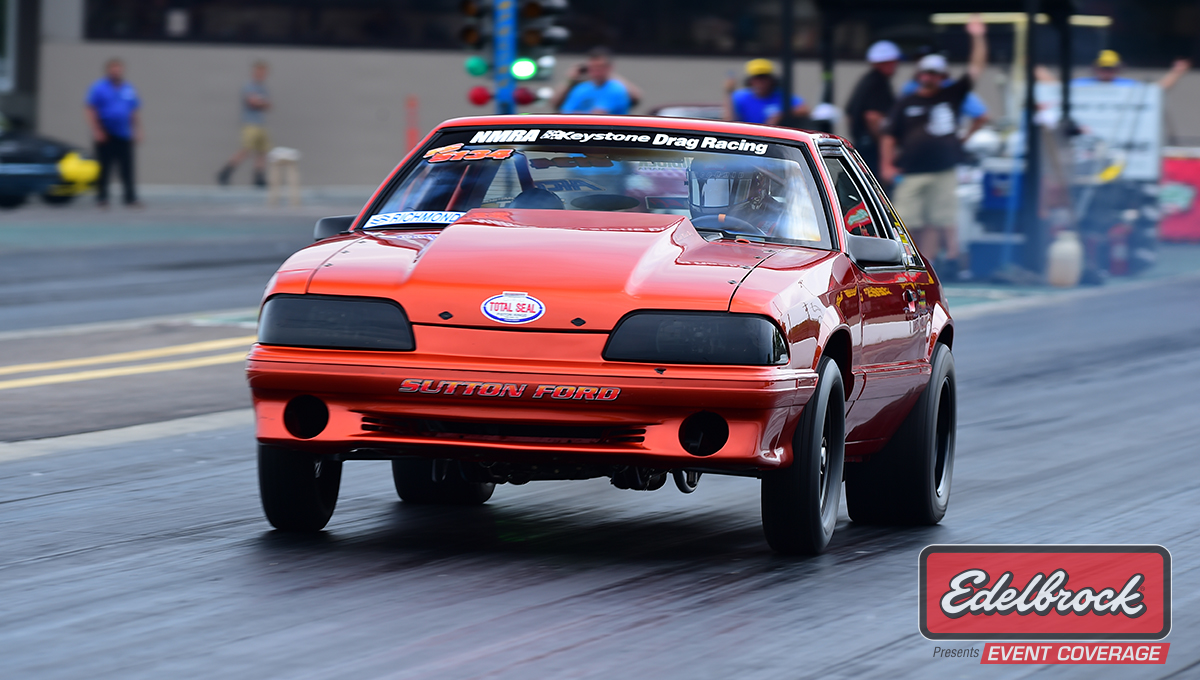 Richmond Gear Factory Stock is going to be a bare-knuckle brawl this weekend. NMRA's version of a heads-up Stock Eliminator has staked a claim in the mid-10s during the only test and tune round on Friday before the rain showed up. Louis Sylvester Jr. was the second quickest of the day with a 10.51 at 126 mph. He was a tick behind the current points leader, Dan Ryntz, who had run 10.50 at 126 mph. Immediately following Sylvester is Justin Fogelsonger, who slid behind the wheel of his new car, a 2003 Mustang Mach 1 that won back-to-back Factory Stock championships with James Meredith as the owner/driver. Fogelsonger ran 10.52 at 126 mph with the Coyote/C4 combination. 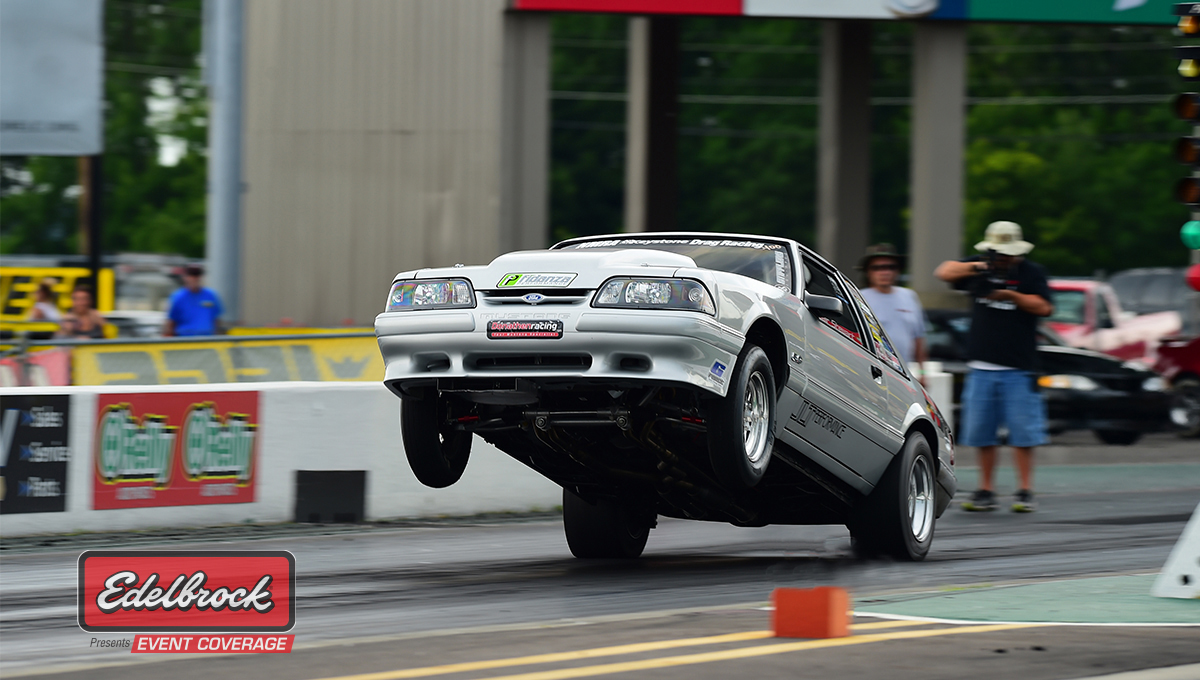 Unofficially the biggest wheelie award of the SuperNationals goes to Clair Stewart III. However, the weekend is just getting underway and we expect someone to pull the bumper off today chasing after the internet glory of biggest wheelie of the weekend. He ran a 10.41, slightly off-pace from Darin Hendricks (10.33), Jacob Lamb (10.39), and Charlie Booze Jr. (10.40) during Friday testing.   https://youtu.be/2Voqm71wvrM 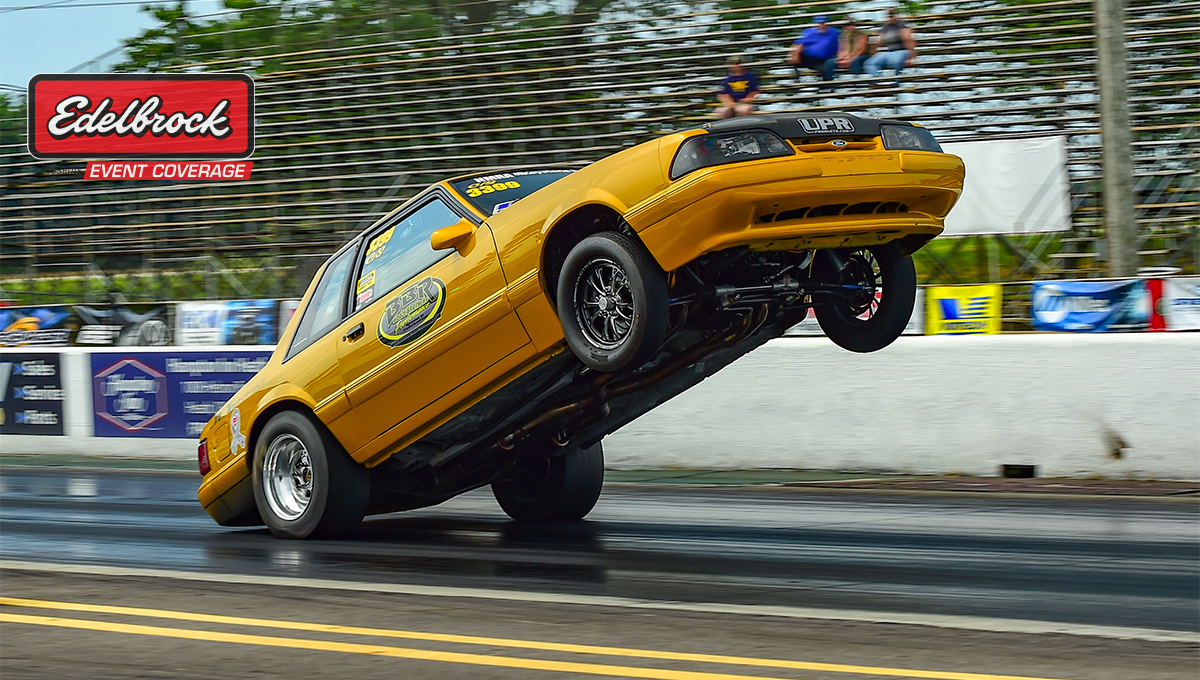 Charlie Booze Jr. told us before he went up to the burnout box that he was going to make Clair Stewart III's wheelie look like a Pro Stock car. He didn't disappoint us as he let out the clutch pedal with the engine screaming against the rev-limiter. He gave up some ET and settled for a 10.42 at 127 mph, putting him second behind Stewart after the first of three qualifying runs. Stewart kept his front-end lower than yesterday and topped the chart with a 10.37 at 127 mph. 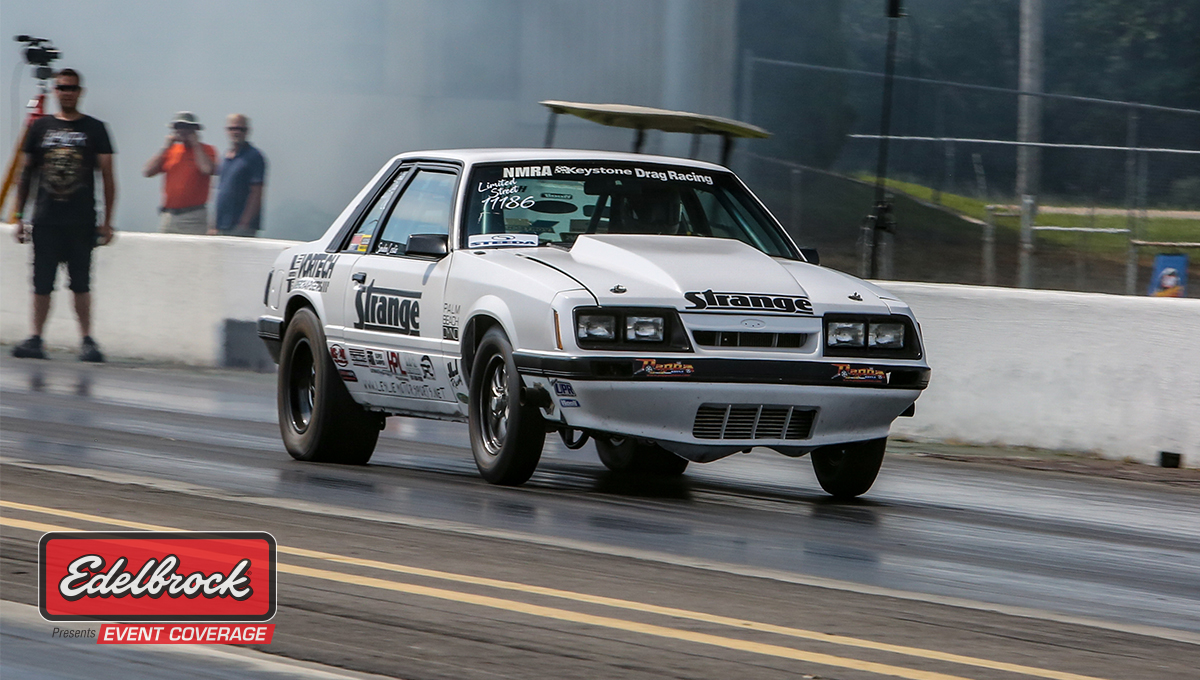 Did we not tell you last month that Sondra Leslie wasn't messing around with her new Steeda Limited Street entry She rocketed down the track with a stellar 8.81 at 154 mph, marking her as the preliminary top qualifier. Leslie sports a MPR Race Engines Coyote 5.0 that gets pumped up by a Vortech Ti supercharger. The engine is remotely-tuned by Ken Bjonnes of Palm Beach Dyno as he sits in the hot tub with a cocktail in one hand and his other working the keys on his laptop. 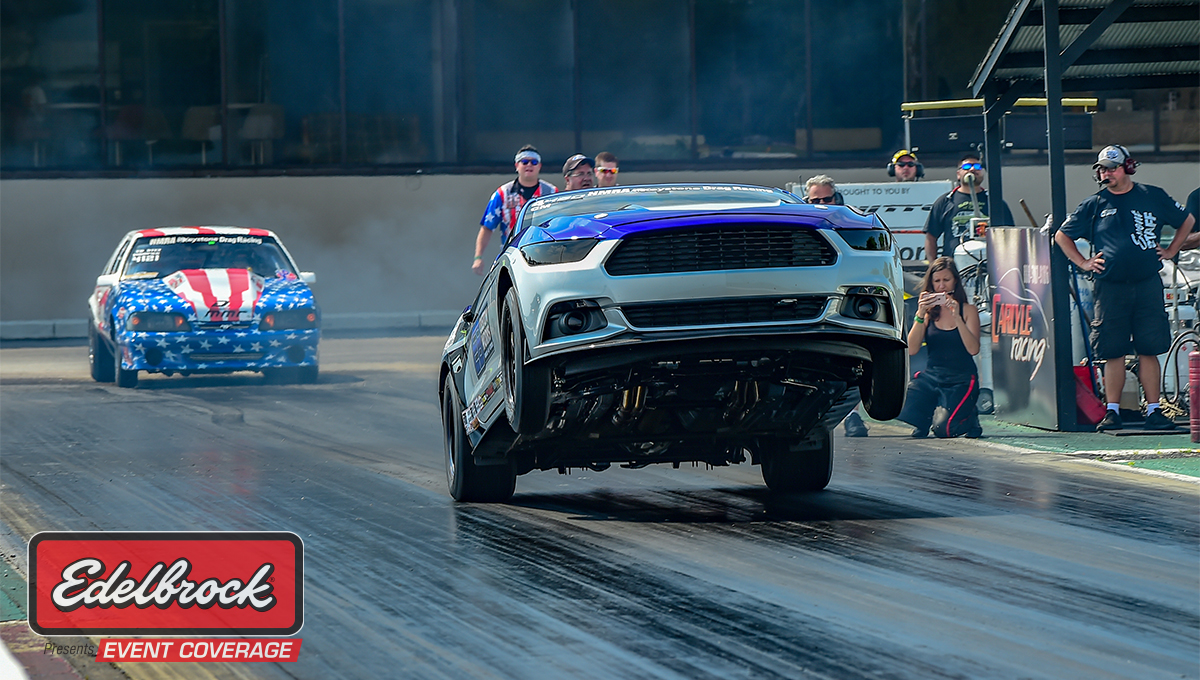 Eric Bardekoff told us before this weekend that he yanked a bunch of weight out of his large-frame S550 Mustang chassis to get closer to his race minimum of ProCharger Coyote Modified. The Cobra Jet clone car put on an airshow for us and Bardekoff wisely pedaled it mid-air. The on-off-on throttle action slowed him to an 8.51 at 161 mph, a mark he knows he can better with his Whipple supercharged Coyote 5.0. 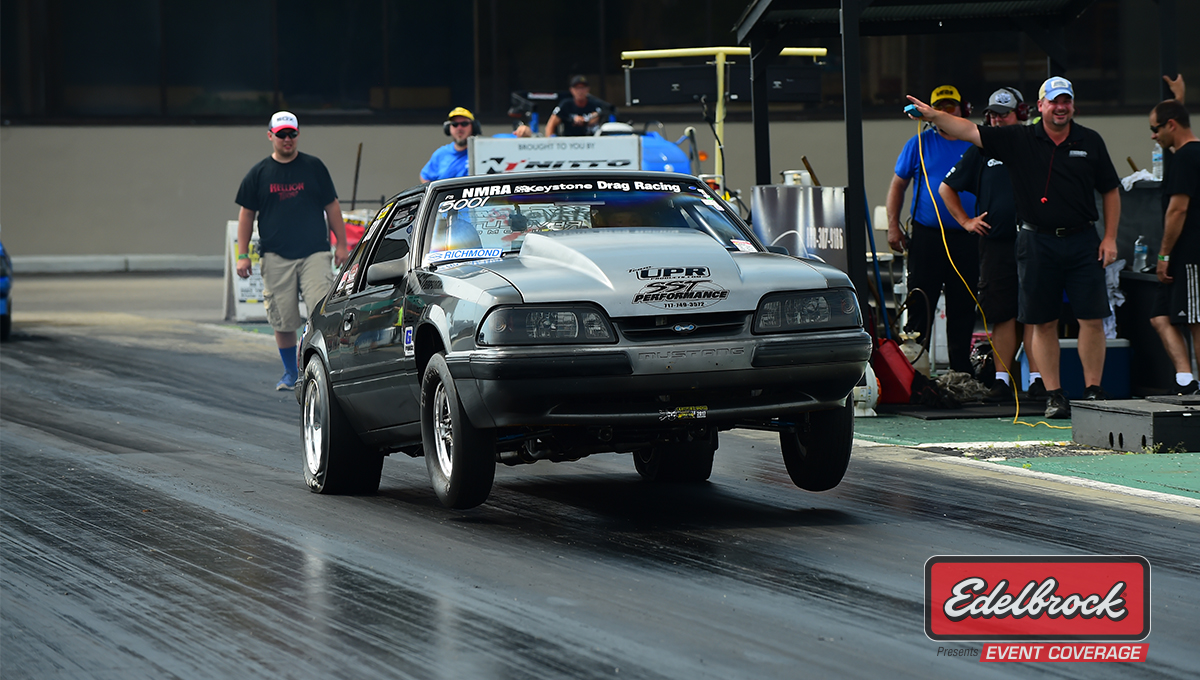 Dan Ryntz continues to have a stranglehold on the Richmond Gear Factory Stock category with his Coyote/Stick combination. He won the Spring Break Shootout back in March, took home the runner-up honors during the All-Star Nationals. And he took home the victory in the rain-delayed CJ Pony Parts Ford Motorsport Nationals, which was a holdover from last month's incomplete event. He is sitting on top of the ladder with a 10.49 at 126 mph as he is looking to go 2-for-2 this weekend and chase down his first NMRA championship. 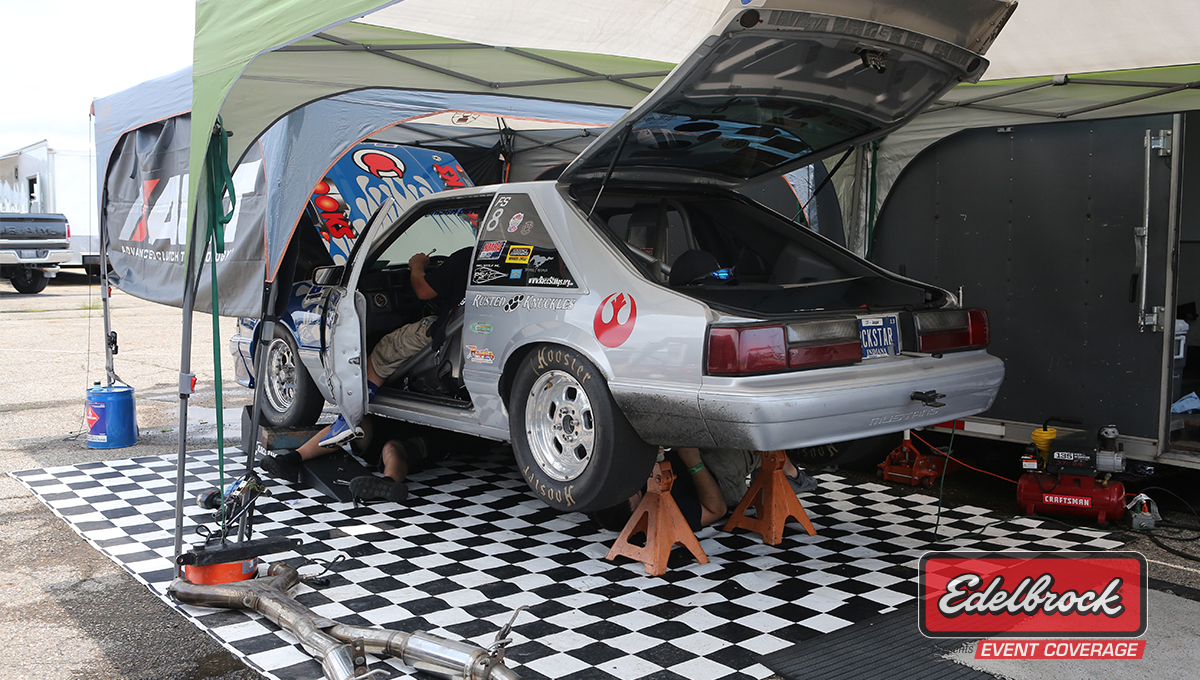 John Leslie Jr. has been dialing in the clutch of his Richmond Gear Factory Stocker. He switched to an ACT clutch and the team collected data yesterday and during the first round, he tried a tune-up in round two that wasn't working for him. So Leslie is going back to the clutch tune he knows for the final round of qualifying. 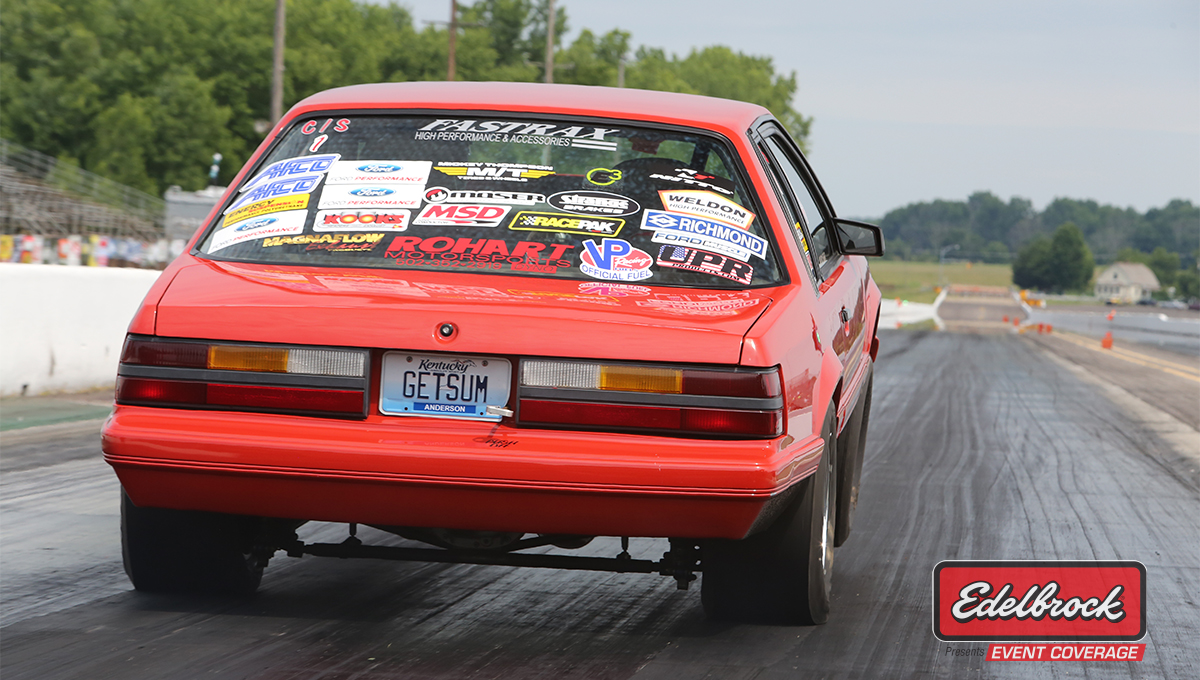 Jacob Lamb ran unopposed in the rain-delayed final of the CJ Pony Parts Ford Motorsport Nationals. In a bizarre semifinal round, his competitor should've been Steve Kurimcluir (aka Steve Kay), but the car pushed through the beams and out of competition. Lamb ran 10.45 at 127, putting him 7th in the 16-car field. 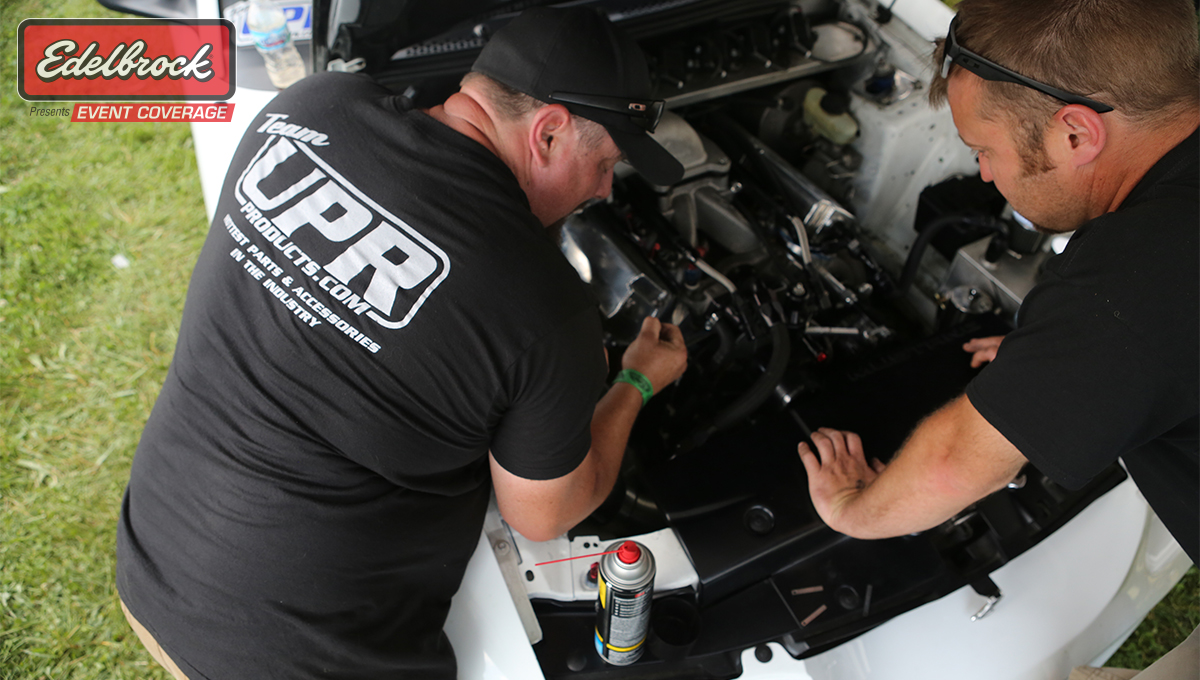 Can Kelly Shotwell continue his number one qualifier streak and remain undefeated As of right now he is sitting third with just one round left to qualify. They ran 9.06 at 151 mph but the team feels like there is something wrong. They checked the crank trigger, which was off but didn't help them in round two. Last time we stopped by they had the valve covers pulled off and were checking the rocker arms. The moment of truth is coming up...UPDATE--Shotwell had to shut off the car and not make his final qualifying attempt. The team is thrashing to find an unknown problem in preparation for tonight's first round of eliminations. 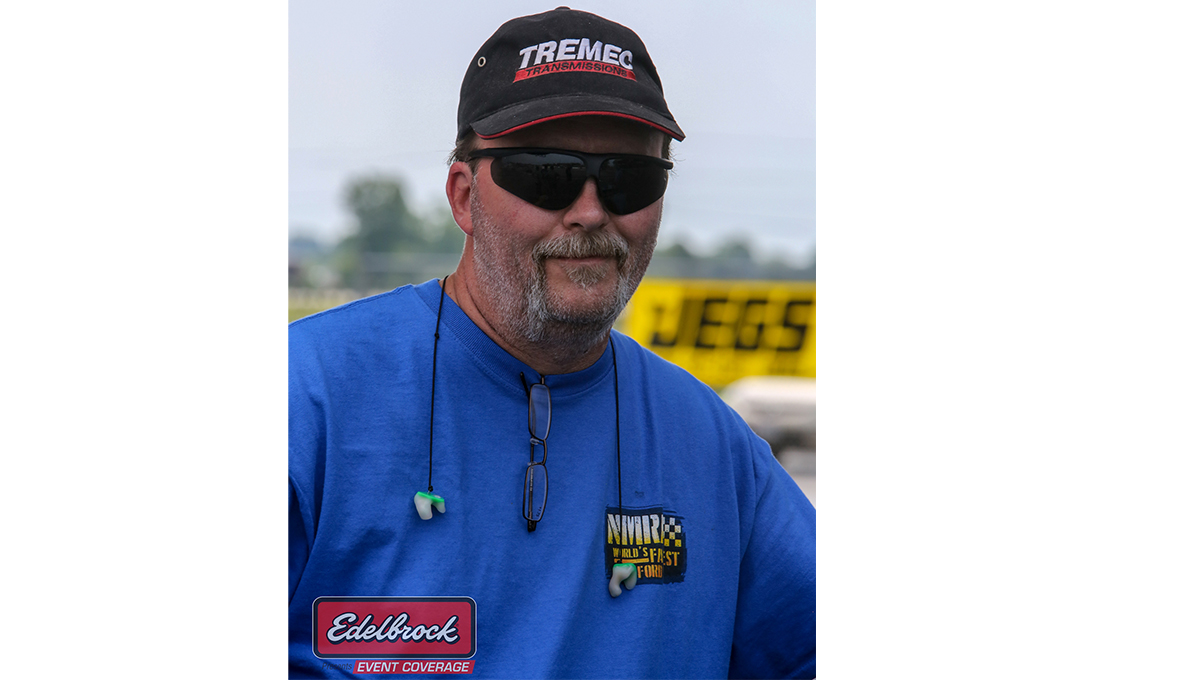 No, that is not James Hetfield of Metalica but rather Chris Beningo, who is officially pulled out of retirement at the request of Ed Curtis and Steeda Limited Street racer Matt Williams. He is helping fine-tune the naturally aspirated combo that Williams uses to run in the mid-9s. 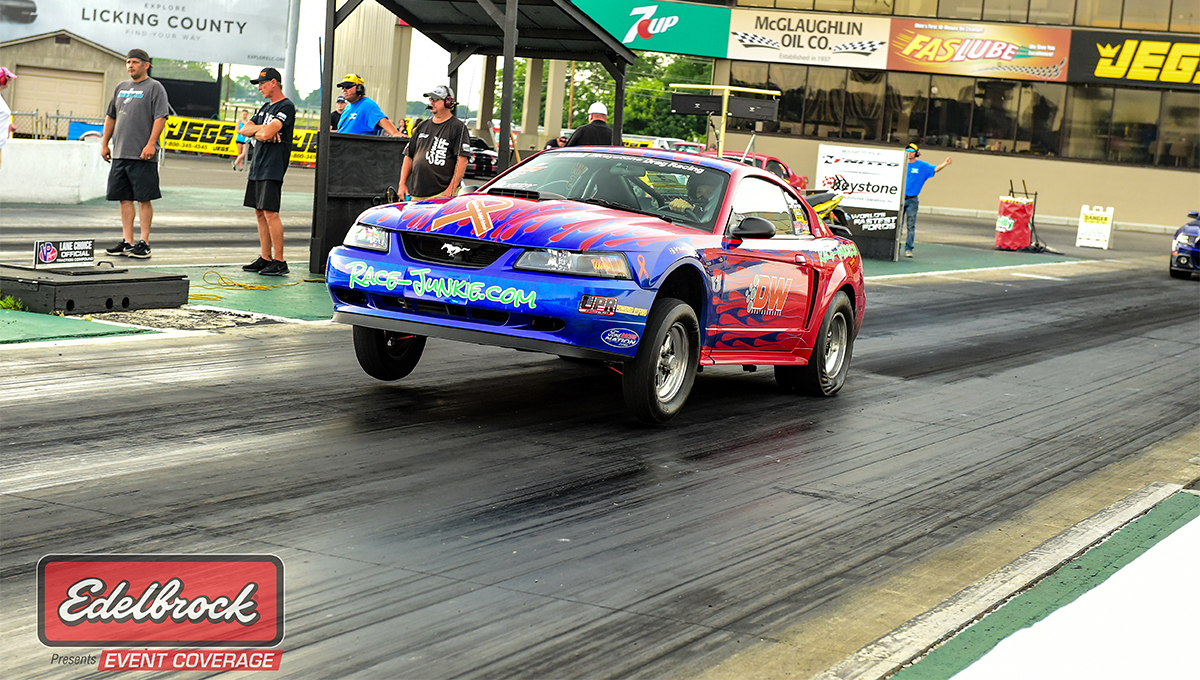 As Justisfy took the Triple Crown during the 150th Belmont Stakes in New York City, Jason Henson of Florida is trying to grab three wins during the SuperNationals with his trusty 2003 Mustang Mach 1. He took the Exedy Racing Clutch Modular Muscle final round that was leftover from the CJ Pony Parts Ford Motorsport Nationals. He finished runner up in Saturday Bracket 1. Henson is aiming to secure the Modular Muscle win tomorrow and also take a shot at Sunday's Bracket 1 and also the Super Ford Showdown. 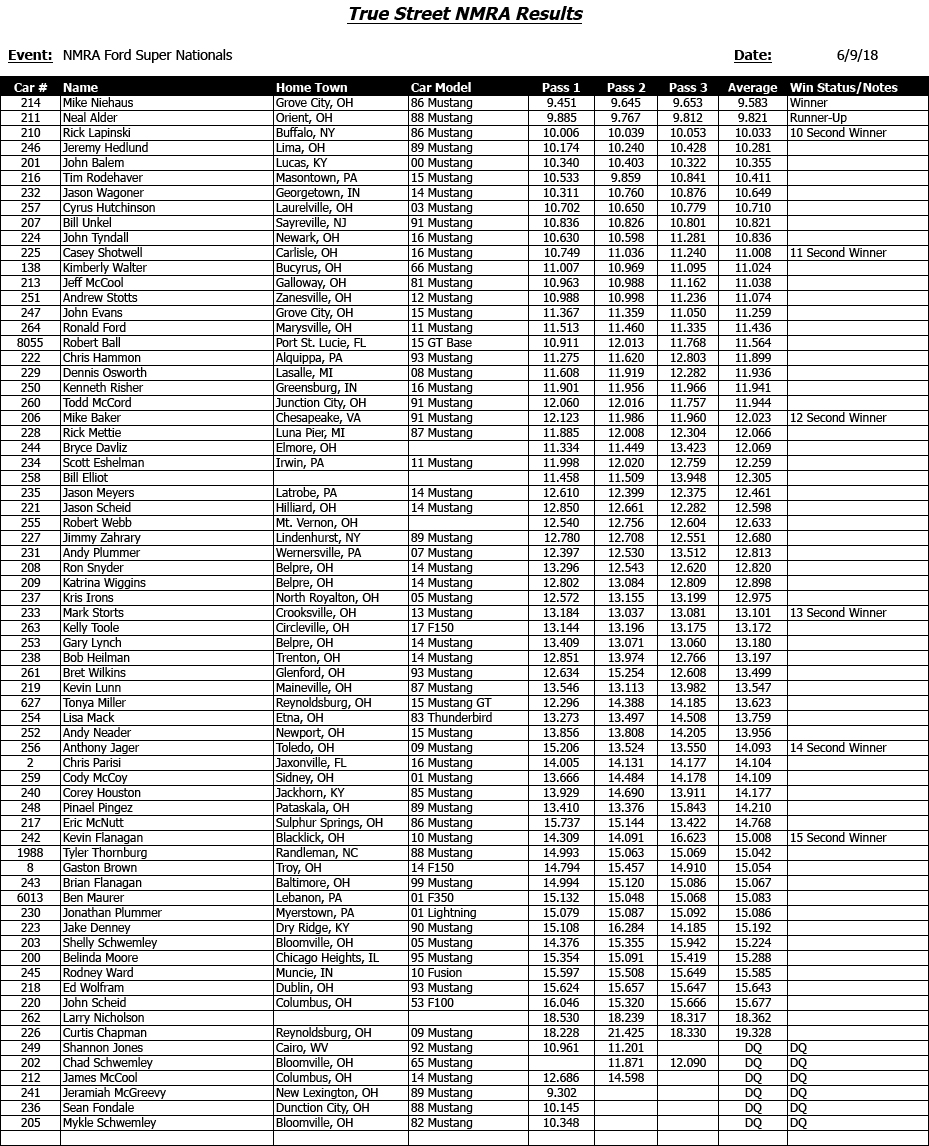 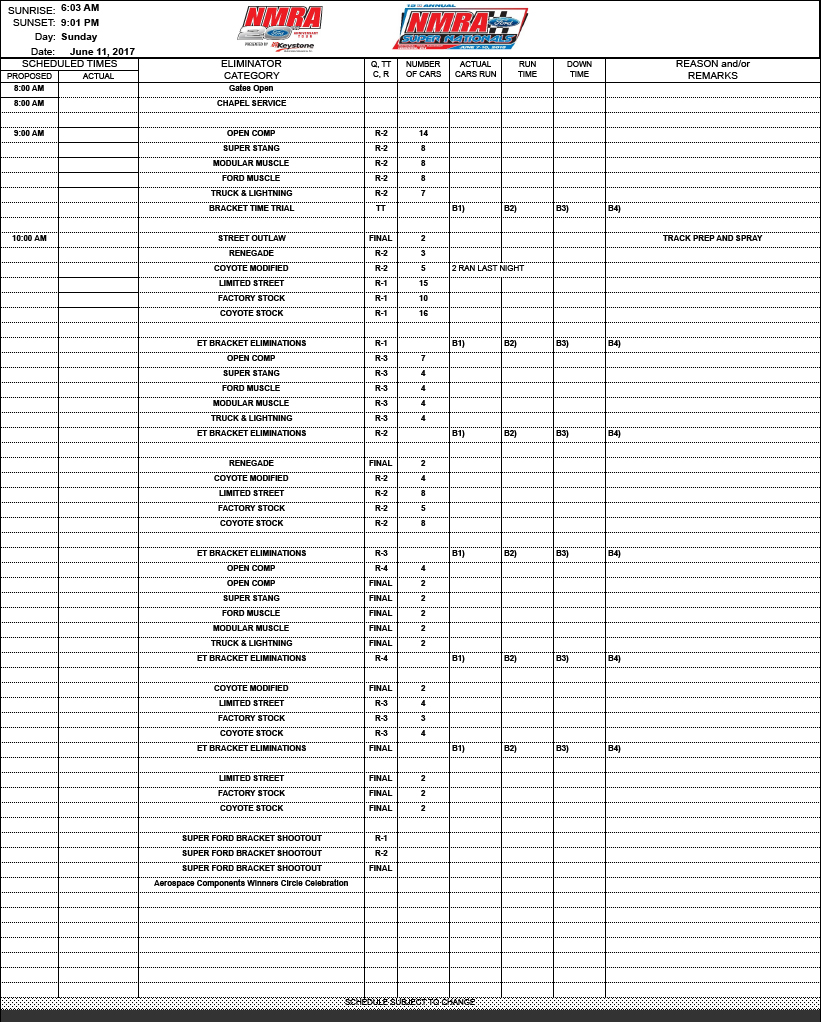