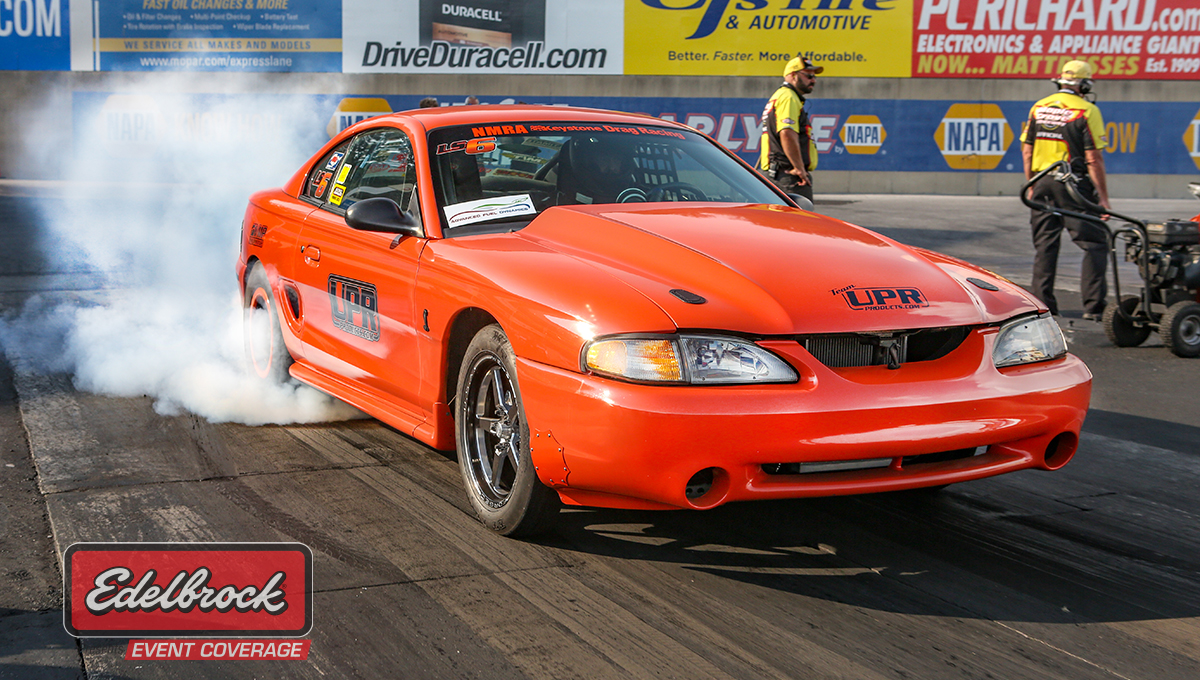 Day two of the 19th annual NMRA Ford Motorsport Nationals at Maple Grove Raceway features two rounds of qualifying for all of the championship categories, time trials and eliminations for the All-Ford Bracket program, QA1 True Street cruise and on-track competition, and the UPR Products Car Show. The day will conclude with a celebration of the Saturday Bracket winners and True Street category victors in the prestigious and awesome Aerospace Components Winner's Circle. Shown above is the Advanced Fuel Dynamics Limited Street number one qualifier, Bill Putnam of UPR Products, as he captured the top position with an 8.715 at 153.56 mph with his supercharged Coyote combination. The run is currently under the national ET record and Putnam will have two shots today, plus eliminations tomorrow, to run within 1-percent of the 8.715 to make it official. 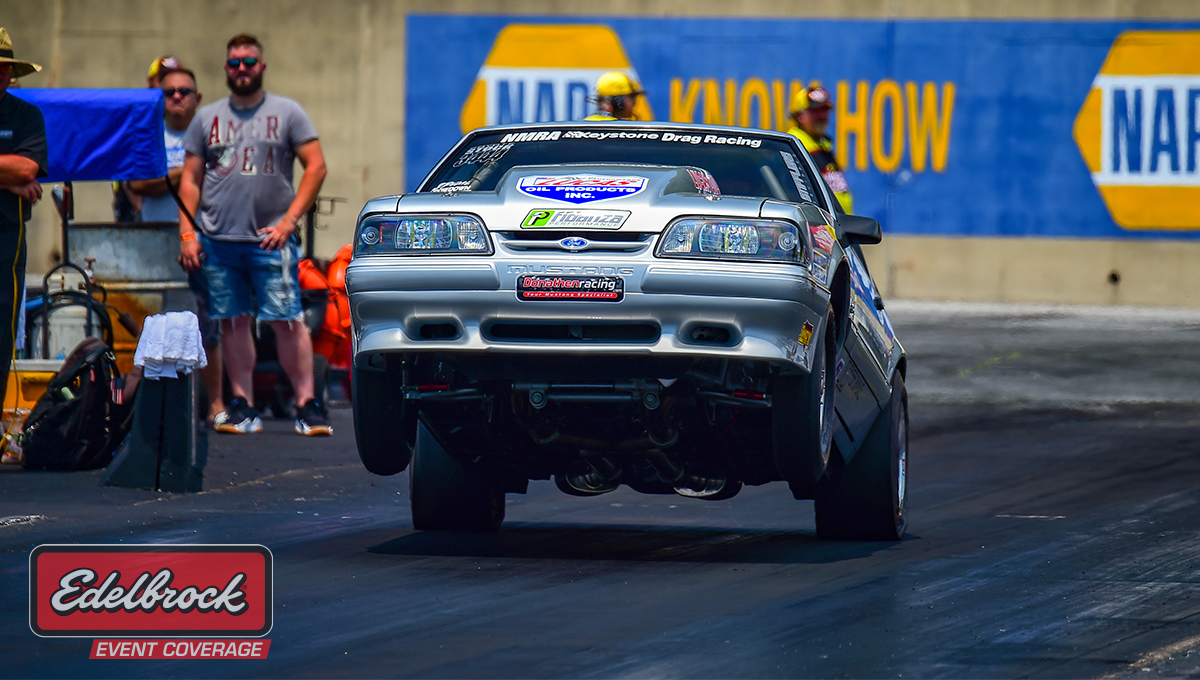 Clair Stewart II is the provisional number one qualifier in G-Force Racing Transmission Coyote Stock as he wow'd the field with healthy wheelies and sits on top with a 10.268 at 129.10 mph. Stewart has a slight lead in the point standings with 1,610 points through the first half of the year. He is followed closely by Darin Hendricks who was suspiciously absent yesterday at the Ford Motorsport Nationals but is rumored to have pulled in overnight. 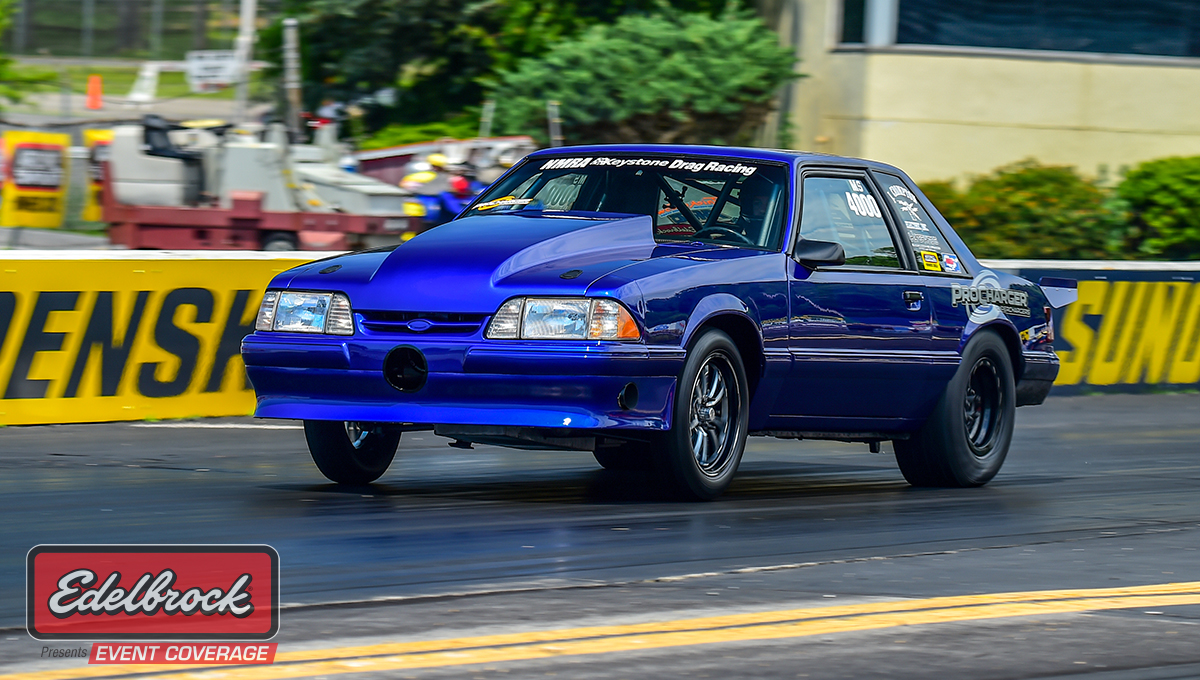 It has been largely a supercharged show in ProCharger Modified Street and Brad Schehr pushed his car to the top of the heap in the first of three qualifying session. The CRE Racing prepared Mustang sports a 365ci engine with Trick Flow High Port cylinder heads and a ProCharger D-1X supercharger. He stopped the Compulink timing system in just 7.861 seconds at a top speed of 174.87 mph. 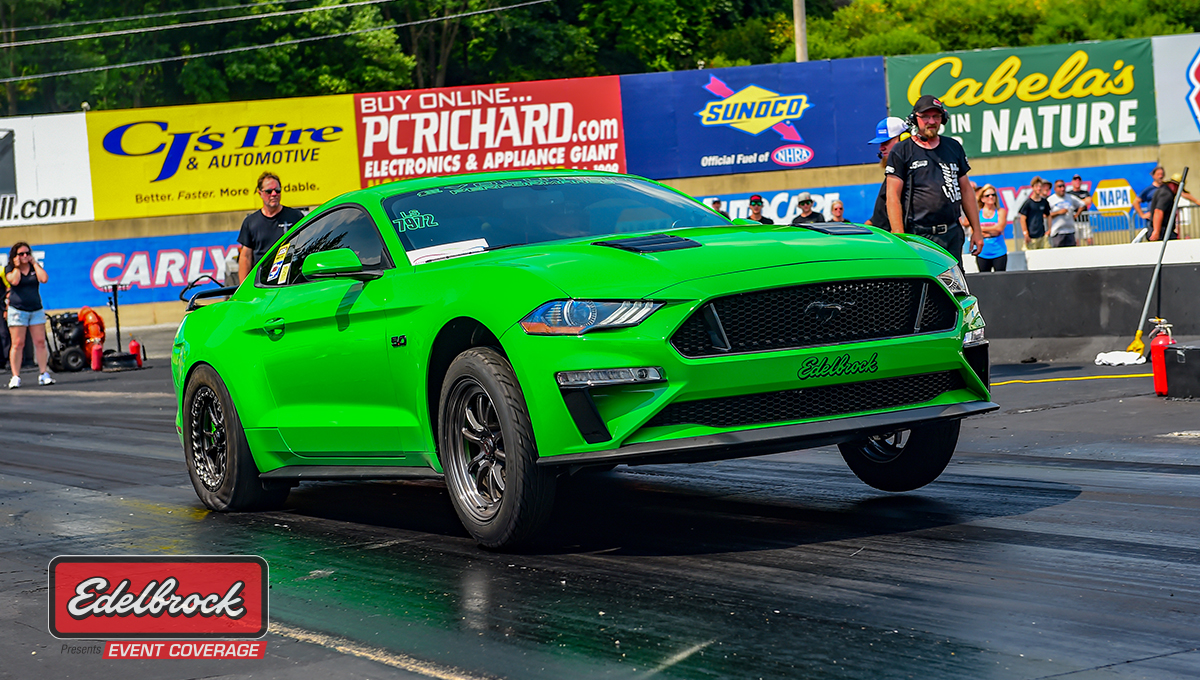 Two days ago the Evolution Performance crew lugged Brian Devilbiss' 2019 Mustang GT to Maple Grove Raceway for a private test session. Last month the team dipped into the 8s with a fairly basic combination, capturing the "Quickest Supercharged Gen 3 Coyote Mustang" title. The other day, they ran quicker and posted an 8.69 at 158 mph with a 1.27 sixty-foot time. The car rolled over the scales at 3,850 pounds and utilizes an Edelbrock E-Force supercharger with an EATON TVS 2650 rotor package and port work by Kong Performance. As usual, Lund Racing was handling the tuning chores to ensure the engine ran cleanly and the 10R80 transmission shifted properly.

Chip Provenza said he was coming to the NMRA Ford Motorsport Nationals to show the Edelbrock Renegade field that he has a fast car. His first official statement was a 4.887 at 146.97 in the heat of the day to become the provisional class leader. We short-changed his combination yesterday by mistakenly calling it a 363ci powerplant. He has long ditched the 8.2-deck engine in favor of a 9.5 Windsor that displaces 400ci. A pair of Trick Flow High Port heads direct the airflow into the cylinder heads and a ProCharger F-1A-91 blower provides that air. 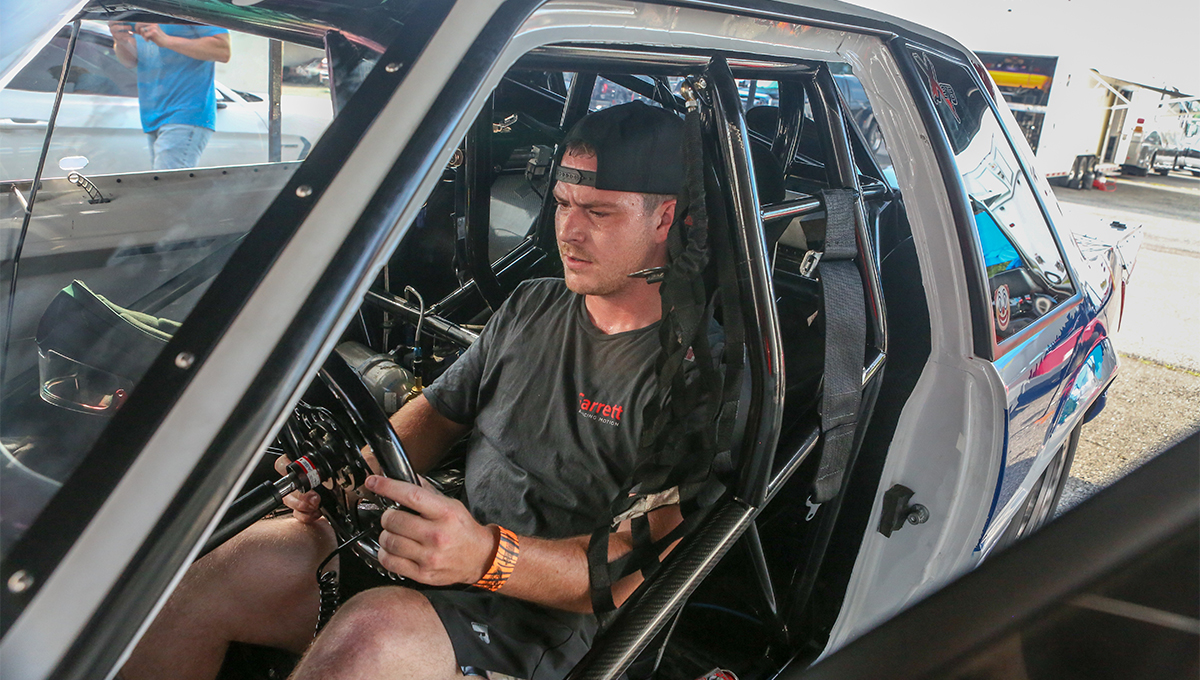 Blake Copson showed up this morning with his racing suit but not his Outlaw 10.5 Corvette because he has been tapped to drive Manny Buginga's second car in VP Racing Fuels Street Outlaw. Copson is well-versed in small-tire racing but it will be the first time he is competing in a supercharged Mustang. He eased into the field with a 4.734 at 152.18 mph during round two of qualifying. 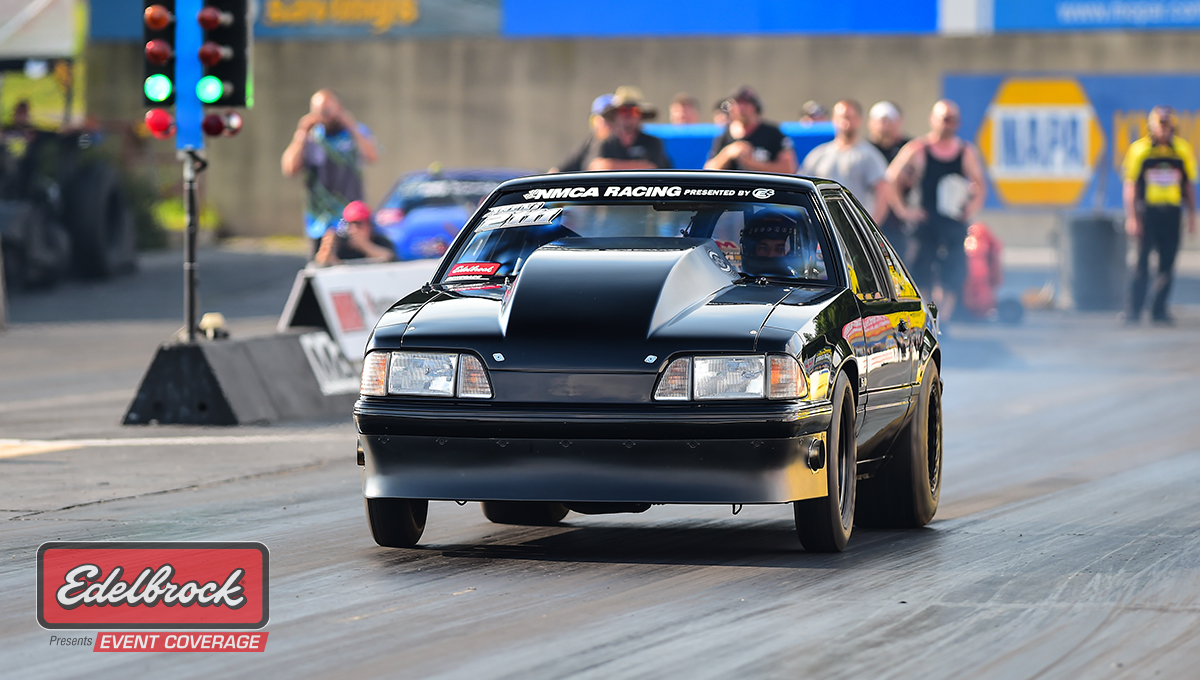 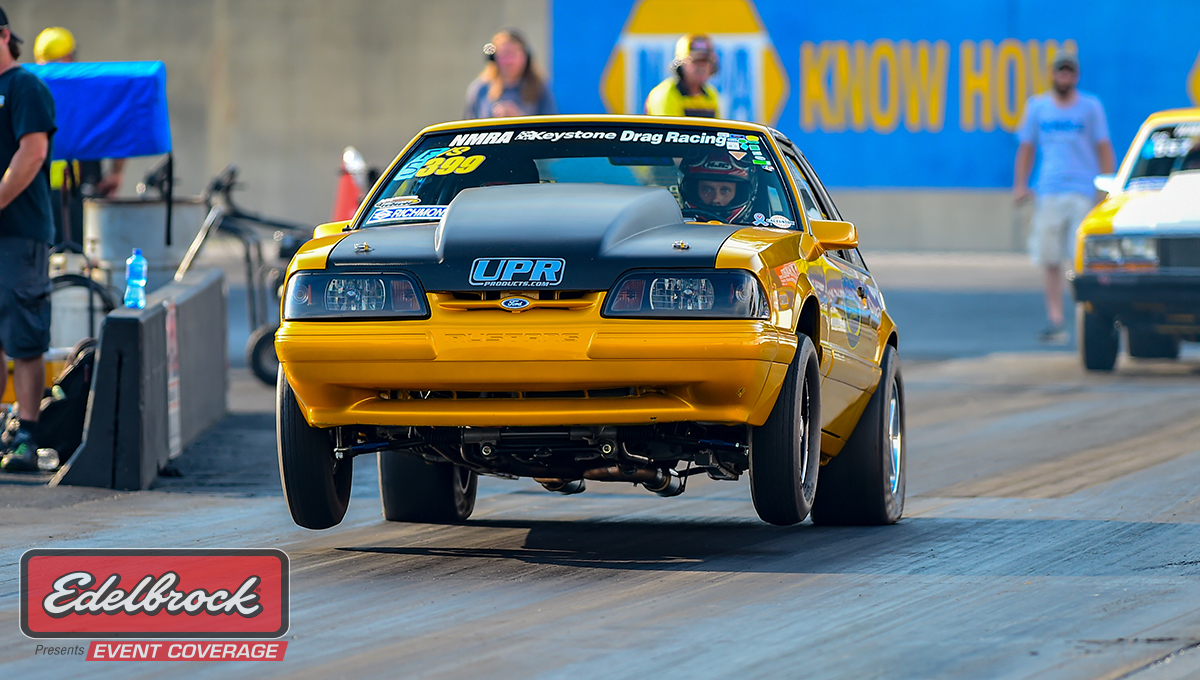 After a mix up in the tower with car numbers, the corrected sheet properly placed Justin Fogelsonger at the top of the ladder of Richmond Gear Factory Stock. He recently switched over to a C4 automatic and drove his way to the top with a 10.395 at just 116.39 mph. Dan Ryntz, the current point's leader, slipped into the second spot thanks to a 10.434 at 126.47 mph. Due to rain, the conclusion of Saturday's program has been postponed until tomorrow. Starting at 8:45AM, Limited Street, Coyote Stock, and Factory Stock will complete their third round of qualifying, followed by eliminations of the NMRA Index and Heads-Up categories, and QA1 True Street will run around 11:30AM. Below the Qualifying link is Sunday's schedule 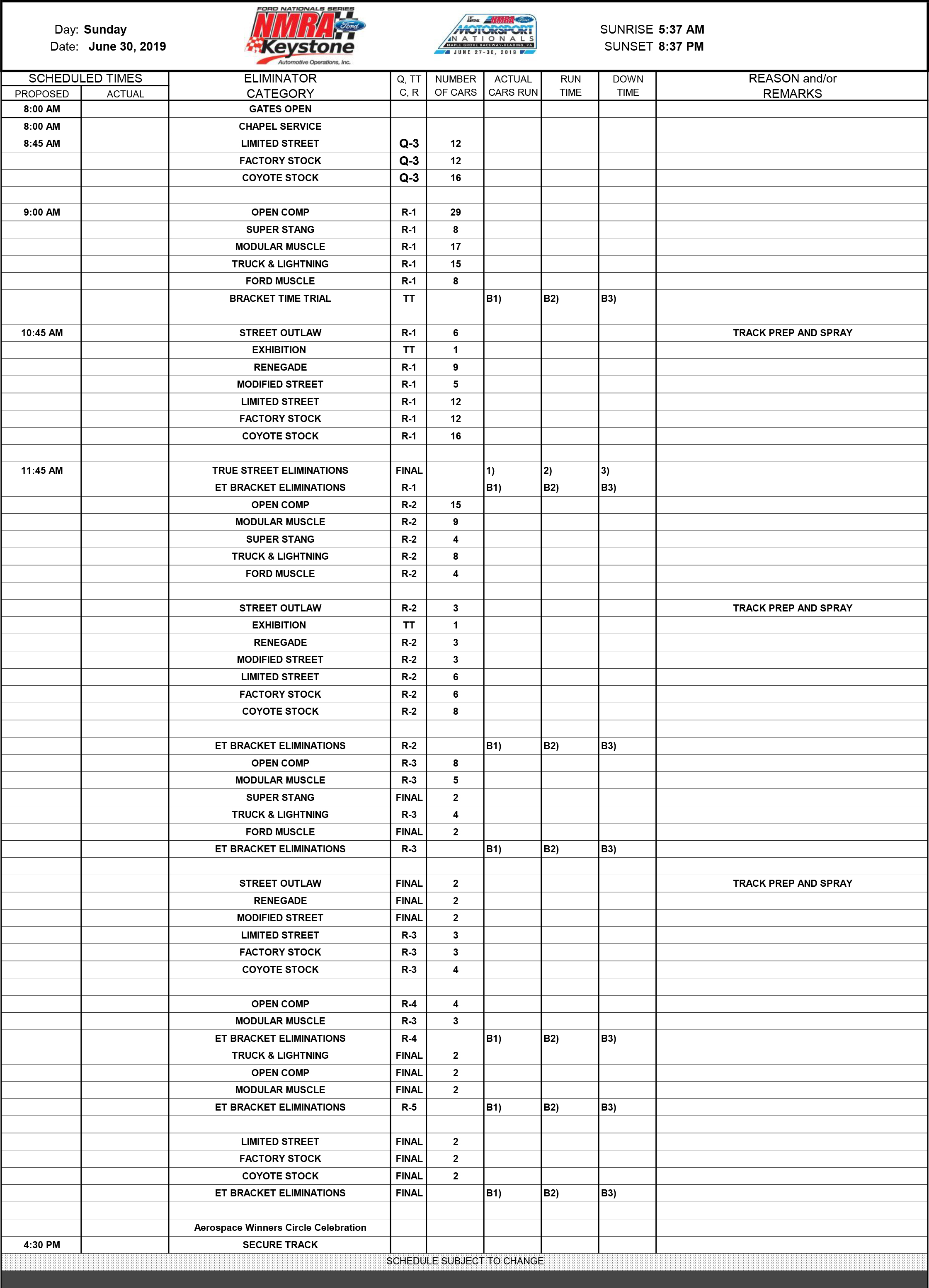